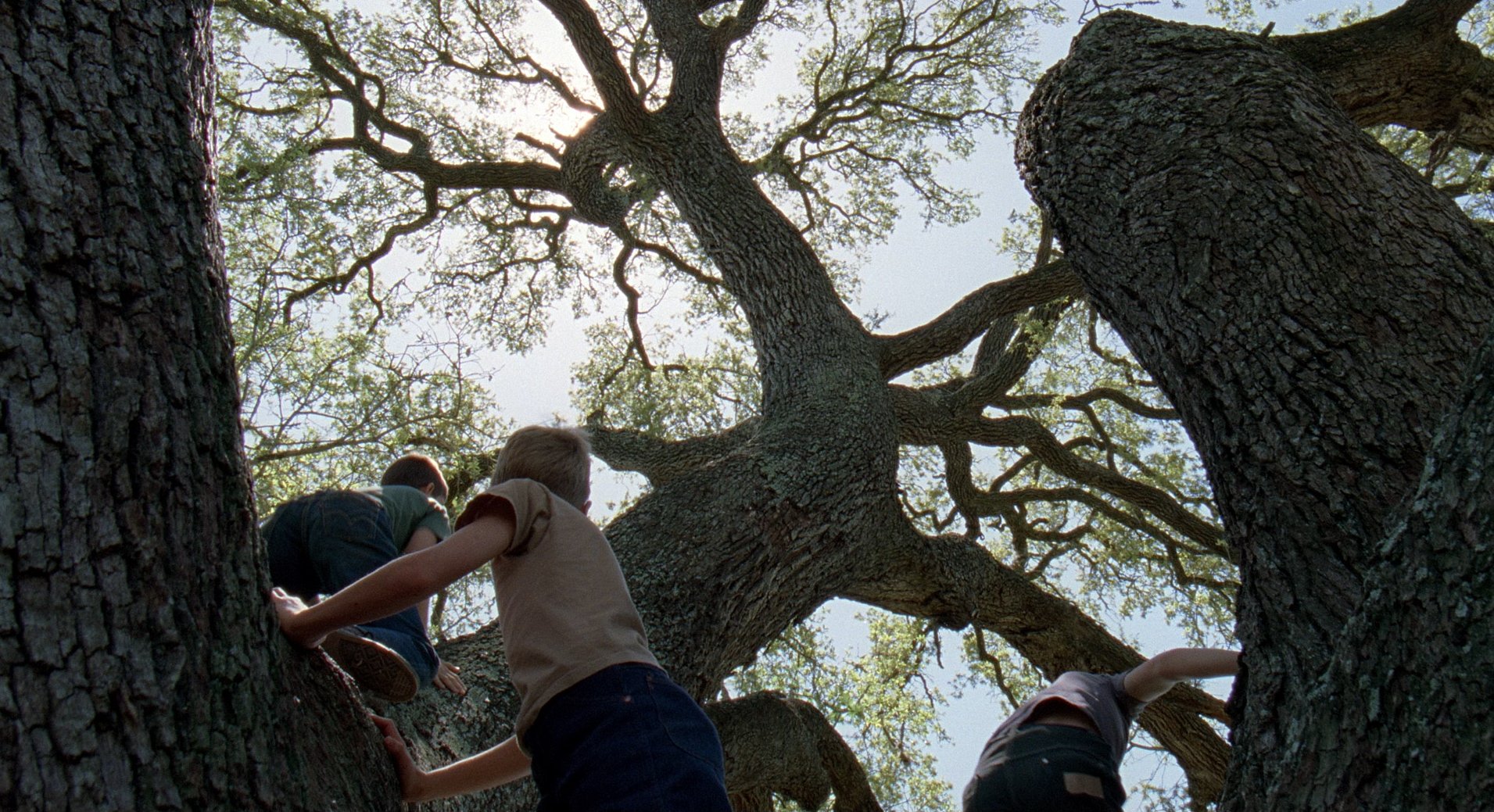 Throughout his magnum opus The Tree of Life, Terrence Malick hopscotches between past and present, from the birth of our planet to a slice of 1950s Americana, where a young boy is shaped by his mother’s “grace” and his father’s “nature”—opposing influences that will continue, for time immemorial, to course and pummel their way through his consciousness with the force of an exploding supernova. He is, like all of us, less than a blip in the universe’s timeline, and for the grownup Jack (Sean Penn)—who waltzes with depressing resignation through the chilly manse he shares with a woman he keeps at arm’s length, the steely tower where he does business, and the landscape of the afterlife—this is an admission of human inconsequence.

The Tree of Life’s fetching images are like glowing shards of glass, and together they form a grandiose mirror that reflects Malick’s impassioned philosophical outlook. It’s unquestionably this great filmmaker’s most personal work, a revelation of how he came to be, why he creates, and where he feels he’s going. And though it’s also a highly self-absorbed vision, emotionally aloof by aesthetic design, in connecting his elliptical depiction of his own spiritual making with a customarily quizzical regard for the shape of all things, from the veins of a plant to the wrinkles of the human face, Malick is sincerely asking us to scrutinize the meaning of our own creation.

Like Enter the Void, the film is structured as an intense, hallucinatory immersion that plugs us into the mind of its characters, and in turn into its maker’s own. Emmanuel Lubezki’s camera—the way it glides toward and retreats from the characters, rises above them, sometimes looks away from them—suggests a ghost visiting old haunts, an evocation of the pleasure and pain of remembrance. This avant-garde montage of moments both precious and sinister from Jack’s life, so clearly modeled on Malick’s own, gives us a bewitching sense of how childhood experience crafts adult sensibilities.

But before there was a child, an animal, even a tree, there was only darkness, which gave way to light, explosions that made land and sea, from which life first rose—a story, as one character whispers, “from before we can remember.” Malick’s fixation on the creation of our planet and the animals that first roamed it, among them dinosaurs that regard each other with almost human-like curiosity, is a gloriously and powerfully conceived extravaganza of light and sound, a space odyssey that allows the director to set up a canny parallel to the trajectory of human life. Finally settling in ‘50s suburbia to capture the waves of young Jack’s rearing, Malick’s vision regards family and relationships the way it does the planet: an organism plagued by disruptions both splendiferous and repulsive before submitting sadly to extinction.

The evolution of Jack’s life is a prismatic mosaic of holy events, each of its pieces no less instrumental to the making of the man Jack (or his brothers) will become. Mrs. O’Brien (Jessica Chastain) teaches him the meaning of grace, pointing to the sky where God resides, and with the serenity and humility of someone who doesn’t presume to know if God is man or woman, even existent. The sky simply represents a path toward personal discovery, an idea that finds rapturously poetic expression in a shot of the boys symbolically looking toward their own future, throwing baseballs into the air that come back to them, yes, probably from the other side of the street, behind their home, from the small hands of their friends, but appearing to us as if they’ve been tossed back by the grandiose hand of God.

And from Mr. O’Brien (Brad Pitt), who arrogantly condescends to his wife’s naïveté, the boys are introduced to old-time religion and subjected to the sort of spare-the-rod-spoil-the-child parenting that might have seemed cliché if the man’s sad terrorism of his boys didn’t feel as if it was being observed from the tender point of view of a growing, impressionable child. (Lubezki’s low angles tell no lies.) The father’s strictness—from the thugishness with which he tries to “man up” his boys to the please’s, thank you’s, and sir’s he instructs them to tag on to nearly all their utterances—startlingly contrasts with the openness with which the mother regards the world. Each parent represents a path, a different branch in the tree of life, and the path they choose, or don’t, may or may not spell their immediate destruction.

The Tree of Life is practically, and unapologetically, unhinged from narrative convention. From one balladic episode to next, viewers are given flashes of an era’s class resentments (a telling glimpse of Mr. O’Brien’s struggle to succeed as an inventor explains the frustration that informs his animosity toward his family) and racial realities: In school, where black boys and girls are conspicuously absent, Jack develops a crush for a vaguely ethnic girl (a descendent of Pocahontas, perhaps?); earlier, Jack and his father make a pitstop in the black part of town for some barbeque and the boy is transfixed by the difference that’s lived happily and unbeknownst to him beyond the purview of his father’s garden. These scenes are so specifically detailed, so vibrantly aestheticized, you don’t doubt that they once happened to Malick.

A tree grows in prehistoric times, in the yard of Jack’s childhood past, in between the towering steel offices of his future (an image that, for me, evoked the progress of the new World Trade Center complex), even in the afterlife where everyone who ever touched his life, however significantly, gathers together for whatever stage comes next in our spiritual evolution. We never know the older Jack in the present in any sort of concrete sense, but as he’s led toward a desert purgatory and toward the sea by his younger self, on a journey his father, his mother, and at least one brother before him once followed, we understand he chose the path of his father, the same one that informed his anger long ago to tie a frog to a rocket and shoot it into the sky, and to the great disappointment of his mother. Throughout these scenes, you gather Malick is confessing to making movies so he won’t become the man who shoots a dog in Badlands, and you hope, pray even, that Jack has finally found the peace his mother’s path might have once afforded.

The Tree of Life is overwhelming, a gorgeous kaleidoscope of light and color that can feel like a prison. Malick’s ravishing but exacting vision is more confident and cohesive than Gaspar Noé’s in Enter the Void, but it’s prone to frustrating redundancy. The images sometimes feel forced into being, too relentlessly conceived, as if Malick weren’t simply recollecting the beautiful, horrible memories of his past, but passing kidney stones, then collaging them. One shot in particular, of one of Mr. and Mrs. O’Brien’s boys riding a tricycle in an attic adjacent to a grotesque tall man, though an obvious, sinister conflation of two earlier episodes (of a boy’s fear of entering said attic and the strange lucidity of visiting the circus for the first time), is inscrutable, digressive, hermetic in a way that you understand it will never mean to us what it does for its maker. In a film about memory, this flash of almost Lynchian dreamlike abstraction feels atonal, almost kitschy.

But even Malick’s more indulgent impulses make perfect, practically cosmic sense. Isn’t life itself a prison? And what if the whispered voiceover that gives expression to characters’ secret thoughts is excessively precious, too precise in its minimalism, pestering us like a mosquito hunting for blood on a summer afternoon? After all, the tree of life—the film’s ultimate symbol—was planted in the ground of Jack’s garden, which is to say consciousness, by his own father, a broken man who once took the wrong path himself, and whose bad behavior, like Mrs. O’Brien’s goodness, colors everything Jack does. Goodness and badness are forever knotted in The Tree of Life, just as in our own lives, impossible to separate like a mosquito from summer, and like a spell, the film’s mystified, sometimes glacial grandeur is such that it’s memory becomes difficult to shake off—even, one imagines, in death.