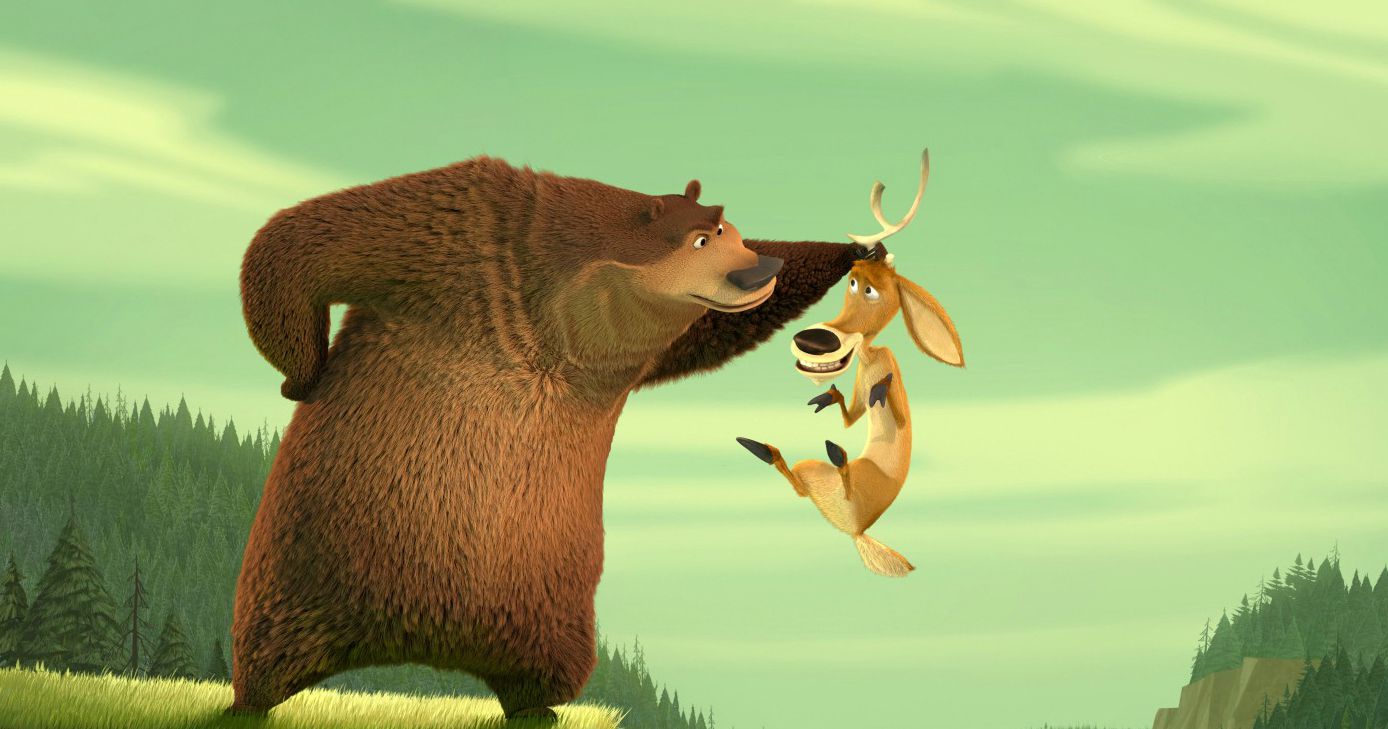 For a kid’s film fascinated by meticulously rendered spit and snot, it’s amazing to find that unlike so many of its other set pieces, Open Season doesn’t fully utilize its 3D effects (available in IMAX theaters) for its signature image: one-antlered deer Elliot (Ashton Kutcher) casually defecating on-screen. Equally surprising is that this latest CG animal romp refrains from forcefully preaching its lessons about friendship, self-acceptance, and growing up (or, in the case of its parental figures, letting go), though the reason for this restraint has less to do with Steve Bencich, Ron J. Friedman, and Nat Mauldin’s screenwriting subtlety and more to do with their narrative’s insignificance. Concerned with a domesticated grizzly bear named Boog (Martin Lawrence) and his adventures in the wild with pesky sidekick Elliot on the eve of hunting season, it’s a forgettable crossbreed of Madagascar and Over the Hedge that simply amounts to a series of slapsticky gags, and only avoids falling into a complete rut thanks to its bouncy momentum and inventive animation. Utilizing exaggerated proportions, round features, and superb hair textures for its furry protagonists and their homo sapien friends and foes, Open Season is consistently pleasing to look at, whether it be Boog’s big, soft nose, his human mommy-surrogate Beth’s (Debra Messing) oval-shaped face and oversized hiking boots, or villainous hunter Shaw’s (Gary Sinise) gnarly teeth. This vibrant visual style—and a rollicking waterfall sequence in particular—seems even more energetic when viewed through IMAX’s red-and-blue glasses, even as such three-dimensional technology continues to result in periphery-located objects and action becoming beset by irritating shimmering edges. Whereas its character models exude personality, the voice-work of its celebrity cast is uniformly bland and its drama middling, with the plot taking too long to build to a climactic showdown between animals and humans that’s then over almost immediately after it begins. Bored as parents will likely be, however, at least Boog’s infatuation with using toilets means that Open Season is an ideal film for small tykes still undergoing potty training.