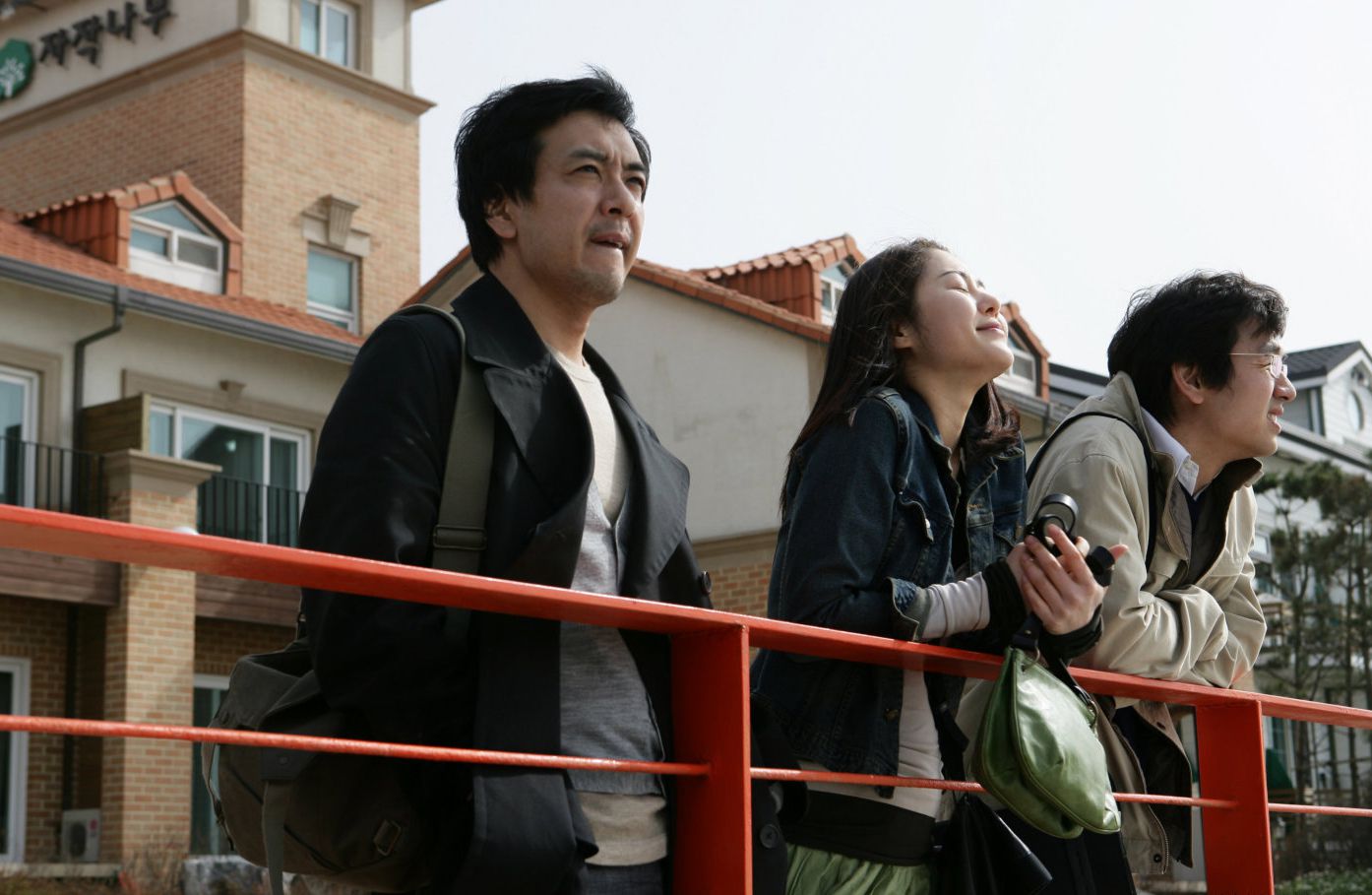 “People only believe in things that are very sound,” says movie director Joong-rae (Kim Seung-woo) in criticizing the vagaries of his new cinematic project, About Miracles, in which a man attempts to discover the invisible bonds shared between seemingly random coincidences. It’s a sentiment that Hong Sang-soo’s Woman on the Beach refutes when it comes to love and desire, both of which the Korean filmmaker depicts as being governed by impulses less rational and predictable than reckless and fickle.

In his unexpectedly accessible follow-up to last year’s Tale of Cinema, Hong examines the contentious push-pull of male-female interactions through a duo of romantic triangles. The first involves Joong-rae, his married friend, Chang-wook (Kim Tae-woo), and Chang-wook’s platonic girlfriend, Moon-sook (Ko Hyun-Joung)—all of whom venture out to gray, sandstorm-beset Shinduri beach for a getaway designed to let Joong-rae clear his head and write his new script—while the subsequent ménage-à-trois features Joong-rae, Moon-sook, and Sun-hee (Song Sun-mi), a Moon-sook lookalike whom Joong-rae falls for after spurning the actual Moon-sook. Through Joong-rae’s repetitious cycle of seduction, sex, and fearful retreat, Hong paints a piercing portrait of impetuous, confused, selfish masculinity in which the thrill of the chase repeatedly proves more enticing than the rewards of triumph.

So often reduced to one-dimensionality in Hong’s work, the female characters in Woman on the Beach (especially Ko’s profoundly charming Moon-sook) prove to be fully conceived participants in their men’s alcohol-filtered emotional and psychological struggles. Bolstering Hong’s thoughtfully constructed, modestly self-reflexive screenplay—full of subtly executed echoes and moments of light wittiness—is his trademark use of cinematographic zooms to reinforce the shifting dynamics of his protagonists’ relationships as well as to visualize conversational transitions from superficiality to intimacy.

Humming just beneath Woman on the Beach’s aesthetically serene surface is Hong’s belief in the importance of images and the act of seeing, which can be sensed in Joong-rae’s admission that what continually dooms his affairs is his insecure fixation on (embellished) visions of his paramours with Western men; Moon-sook’s statement that gazing up at the stars is what gives the universe meaning; and Joong-rae’s infatuation with romanticized conceptions of Moon-sook and Sun-hee (bolstered by the two women’s many similarities). No surprise, then, that it’s Hong’s largely stationary, yet deftly composed, camerawork that gives the film its discreet power, working in tandem with his dry, naturalistic dialogue to create an alternately humorous and forlorn mood situated somewhere amid the collision between idealism and reality.