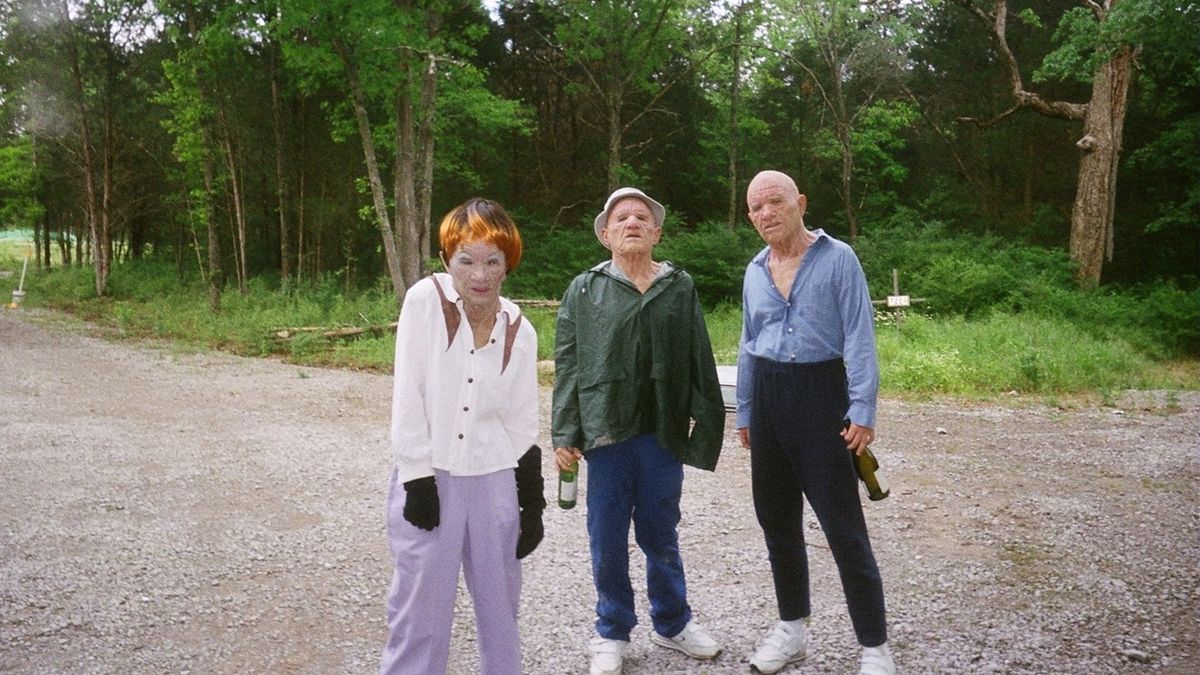 “This movie is more like an artifact, it’s like something found somewhere and unearthed—an old VHS tape that was in some attic or buried in some ditch.”—Harmony Korine

Yes, it’s fun to imagine Trash Humpers being shot on some outdated, stolen camcorder, used by some suburban mutants who seem to have slinked out of a rest home populated by the cast of The Hills Have Eyes. Director Harmony Korine’s trash aesthetic is handheld, muddy, and purposefully marred by auto-tracking issues, tape glitches and heavy duty wear and tear. The people recording are a small, motley group of prune-faced geriatrics with young people’s skinny, lithe bodies who spend their time in parking lots and back alleys hurling cinder blocks at beaten-up TV sets, smashing fluorescent bulbs and dancing on the scattered remnants, and, as the title suggests, hurrying over to the nearest garbage receptacle and humping away.

It’s a prankster film that seems to have been made on the fly by Korine and a handful of his friends (including his wife, Rachel, as the female mutant). The accents are vaguely Midwestern, but this movie could have been shot just about anywhere, in its anonymous “just outside of some inner city” neighborhoods. Scenes operate on a different level than narrative cinema, and there’s less suspense in watching a scene unfold then there is a sense of wonderment that Korine and his cohorts were more or less able to get away with what they were doing.

At one point, a mutant (I think played by Harmony himself) runs over to a telephone pole and starts humping it while, on a low-level high rise in the far background, a couple of teenagers take notice and point at him, then seem to ignore him. It’s hard to tell because they’re backlit by the sun and entirely in shadow, but it made me wish that Trash Humpers had gone more for a documentary/in-the-street approach and offered more interaction between the mutants and real people going about their normal, workaday lives. The film is at its most lugubrious during a nighttime drive through town when one of the mutants (again, I think it was Harmony himself) waxes philosophical about how much happier his life is than all these people who go to church on Sunday.

At a certain point (maybe fifteen minutes into the melee, although it’s still growing on me), Trash Humpers runs out of steam. There’s only so long you can watch obnoxious mutant tap dancers sneaking around, and even the shock value wears thin: When a cross-dresser winds up getting murdered, I’m not sure if the anti-climactic nature of the gag is meant, earned, or justified. That said, Korine seems to love his freak show assortment of supporting characters, including grotesquely overweight naked women in a hotel room who coddle the mutants while singing “O Holy Night,” and a bespectacled little boy with a mad cackle who shows the mutants how to put a little girl doll in a plastic bag and beat her to death.

Throughout, the mutant dialogue is mostly an annoying cackle and some trash-talking cussing, and their onscreen action is relentless dementia (they force a pair of strange men in hospital johnnies to eat pancakes with dish soap, and at one point the female trash humper steals a baby and takes it down the lane while singing a little ditty). A mantra for the film is the childlike war-cry, “Make it, make it, don’t fake it!”—after a while it reeks of look-at-me desperation. Trash Humpers wants to provoke, and yet much of the time it seems like its idea of getting aggressive with the viewer is in seeing how much we’re willing to accept the repetition of gestures, slogans and images. One longs for the kaleidoscopic structure of Korine’s masterpiece Gummo or the constant unpredictability of Julien Donkey-Boy (which would jump from one incredible incident to the next, from Werner Herzog drinking cough syrup from his shoe to a rap number from a “Black Albino straight from Alabama” to Julien playing tin-can telephone with his sister to the father making his son slap his own face).

Trash Humpers tries to do something different and feels more like an art installation project than a movie. While it often wears on one’s patience rather than pushing buttons, it’s a weird little artifact that might appeal to certain adventurous viewers willing to go for it. The press kit alone is a treasure trove of spooky images of these decrepit figures lurking in various industrial locales and messy rooms, with quotes from the director that evoke a kind of underground terror. (“We will always be here lurking around and looking in windows and dancing in parking lots.”) It’s a document from the inside of the American wasteland, and what’s upsetting about that diseased notion is that maybe our country really is the dumbest place on earth.

Watching Movies: You’ve Got a Friend in 3D