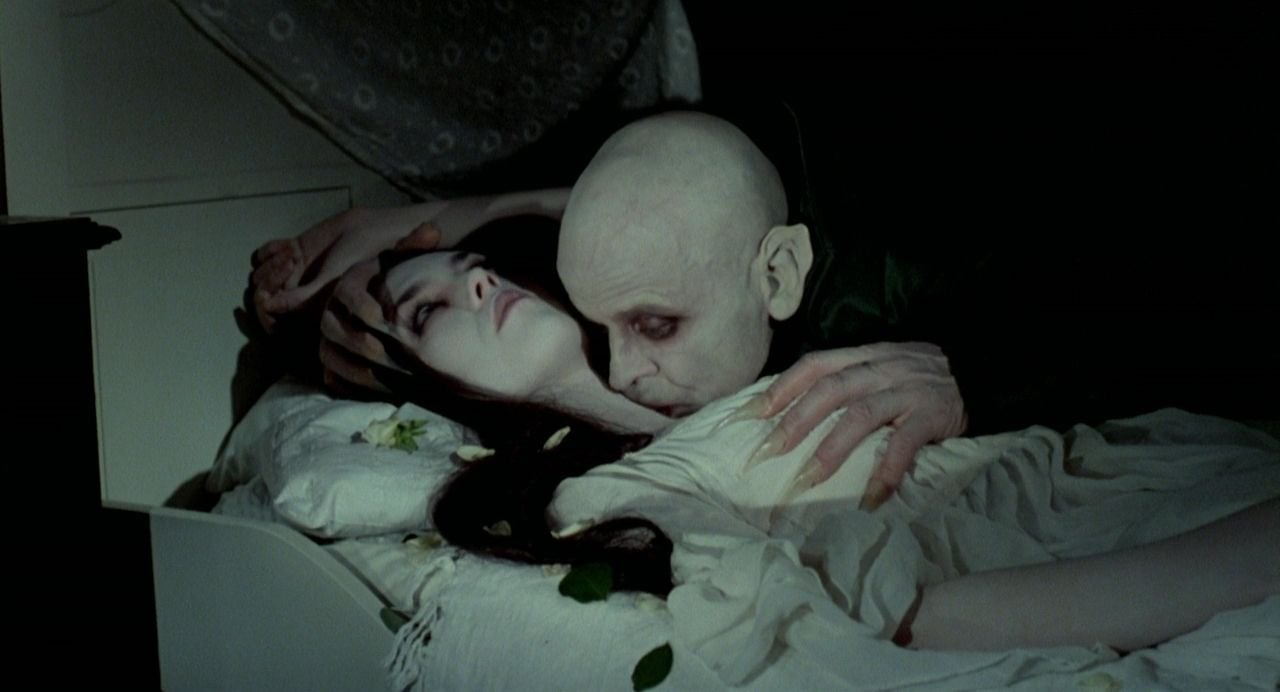 Werner Herzog’s Nosferatu the Vampyre should be an object lesson in the art of the remake for a film culture rife with an irrepressible rage for the redo. Playing to the visual and narrative strengths of the original, down to cribbing many of its iconic compositions, Herzog still succeeds in imprinting the material with his own unique sensibility. The result is an earnest homage that also bears unmistakable traces of cinematic one-upmanship.

At least, that’s one way to read the opening shots: a slow track across a row of mummified corpses that abruptly cuts to slow-motion footage of a bat in midair. Calcified tradition takes flight on the wings of Herzog’s macabre imagination. Cut to the streets and canals of Wismar, where enterprising estate agent Jonathan Harker (Bruno Ganz) spends his spare time strolling along the strand with young wife Lucy (Isabelle Adjani). He’s handed a supposedly plum assignment peddling prime real estate to an entitled Transylvanian named Dracula (Klaus Kinski) by his tittering boss, Renfield (Roland Topor, author of The Tenant). Harker’s adagio passage from bourgeois-idyllic Wismar to the Count’s haunted realm of ruined castles and tenebrous tombs has a hushed, meditative aura about it. Herzog matches his eye for mystic landscapes lifted straight from his beloved German Romantic painters (awe-inspiring shots of fog-shrouded peaks and torrents cascading through stony gorges) to the stirring strains of Popol Vuh and Wagner’s Das Rheingold.

The film’s delineation of Dracula’s castle typifies Herzog’s method throughout: an amalgam of dense poetic imagery and unadorned materiality. Caked with cobwebs and littered with the accumulated detritus of disuse, this cavernous space exudes what D. H. Lawrence called the spirit of place. Kinski’s Dracula is a fascinating creature, passionate and pestilential in equal measures, whether tossing aside the furniture to get at Harker’s bleeding finger, or delivering pensive soliloquies full of poetry and real pathos. Kinski makes you feel the unendurable weight of the years when he says, “Time is an abyss. Centuries come and go. Death is not the worst.”

Like Gary Oldman’s mutton-chopped Lothario in Francis Ford Coppola’s take on Stoker, Kinski’s rather more rodent-like Romeo is motivated by desire. “The absence of love,” he tells Harker after glimpsing Lucy’s photo, “is the most abject pain.” For all that, Kinski’s sympathetic portrayal never blunts the verminous qualities of the Count, who brings the plague with him to Wismar in the form of thousands of rats. In the film’s most haunting scene, Lucy steadily threads her way across the town square, now piled high with the coffins of plague victims and teeming with rodents, where a funereal banquet quietly going on amid the wholesale mortality is overrun with vermin.

Apart from these few flourishes, Herzog keeps his revisionist cards close to the chest until the film’s final 10 minutes, then deals out one subversive trump after another. Dracula’s demise, for instance, is much more corporeal than in Murnau’s Nosferatu. No evaporating in a puff of smoke here: Dracula collapses in a heap in the corner and there he remains. Nor does Herzog exhibit much faith in the stock authority figure: Dr. Van Helsing (Walter Ladengast) is an officious quack endlessly pontificating about investigating matters in proper scientific fashion. After he dispatches the Count with the obligatory stake, he’s promptly arrested and hauled away. Then, too, Lucy’s sacrifice has been for naught, since the vampire plague continues with her husband, who’s steadily turning into one of the rat-fanged undead.

Nosferatu the Vampyre ends on a note of malignant triumph with one of cinema’s most beautiful and disturbing final shots, a moment Herzog cheekily scores to Gounod’s solemn “Sanctus.” Loosed from his enchanted circle of Eucharist crumbs, Harker gallops across a windswept plain while overhead serene blue sky turns to lowering thunderheads—an unsettling effect achieved simply by flipping the superimposed image. In a finale reminiscent of Roman Polanski’s similarly mordant Fearless Vampire Killers, unmitigated evil is loosed upon the land, a prospect for which the film can find absolutely no remedy.