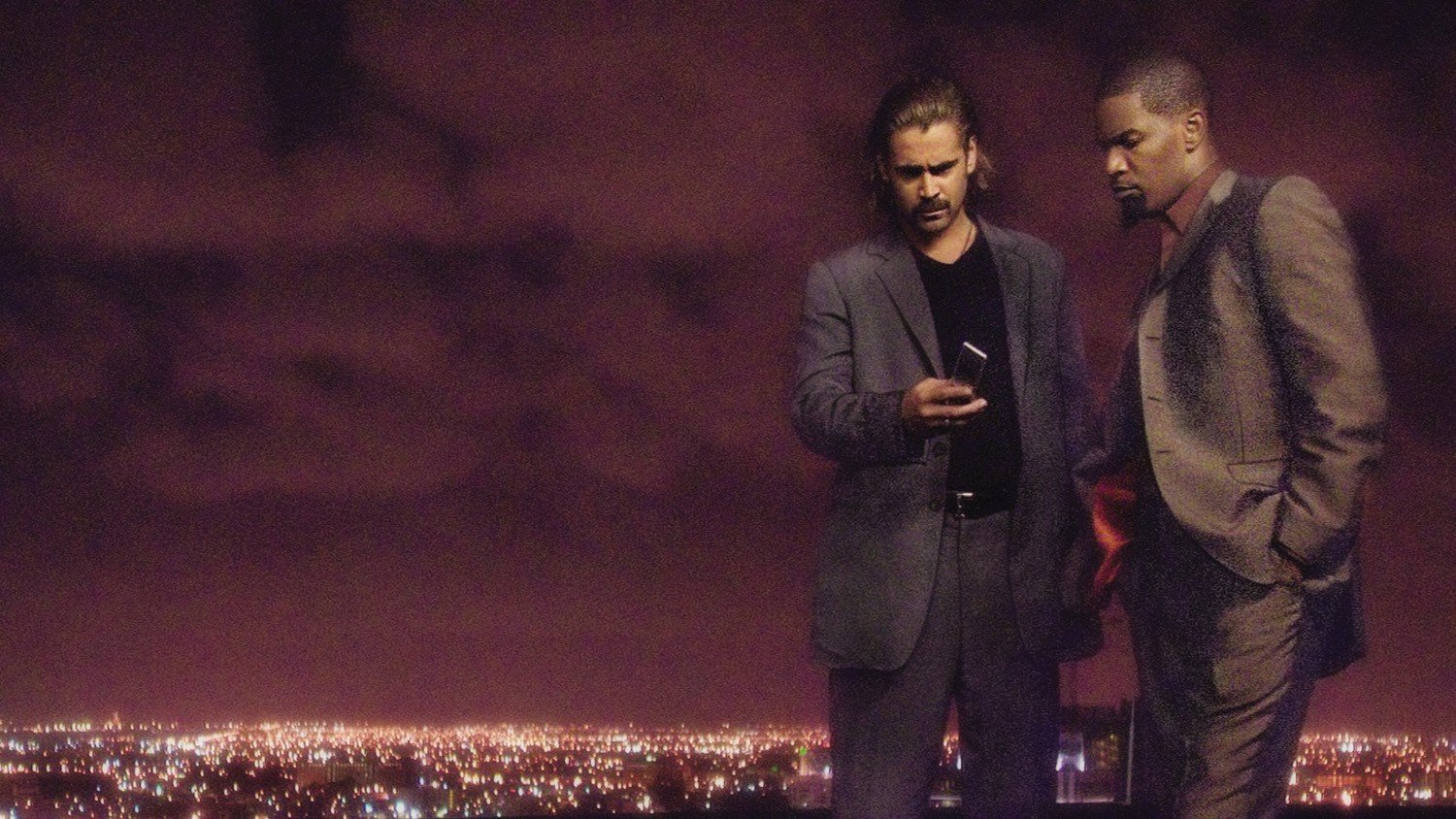 One of the great triumphs of style over substance, the 1980s cop show Miami Vice delivered the same premise week after week: Crockett (Don Johnson) and Tubbs (Philip Michael Thomas) pursue the drug dealers, looking stylish in their designer clothes and flashy cars that could never be afforded on an undercover cop’s salary. They were underscored by that week’s hit single (“You Belong To The City” or “I Can Feel It Coming In The Air Tonight”), and the quavering of singers like Glenn Frey and Phil Collins were used to suggest the inner soulfulness of the cop duo. In lieu of character development, the most memorable scenes were Crockett riding around on his boat inevitably staring into a tequila sunrise, or riding along in his car with Tubbs under the glimmering neon lights. It was all very adolescent, macho, and simple, but it was fantastic pulp. Miami Vice was boldly cinematic and splashy, awash in vibrant pastel colors, and every week viewers could plug into the fantasy of dashing rogue crime fighters in beautiful locales, with beautiful and sexy women and doomed romances, and a nihilistic mean streak where conflicts were resolved through a clip full of bullets.

The ‘80s were a decade that built up the idea that people should consume the things they want, and Miami Vice indulged that fantasy. Every frame was filled with oppressive Reagan-era technology and appliances, with immaculately clean kitchen countertops and wall-sized windows overlooking the ocean. The look of the TV show was pristine and crystal clear, dare I say spotless. And that’s the most noticeable difference between Miami Vice then and now. This time, the look is a muddy gray haze of digital pixels, with the night sky transforming into a swirling blur of video noise. The neon city lights pulsate and flicker. And the storytelling, removed from the confines of TV narrative where everything must be micro-explained to the lowest common denominator, goes in the opposite direction where all exposition is casually omitted, reducing—or revealing—Crockett and Tubbs (played here by Colin Farrell and Jamie Foxx) as men of pure, adrenaline-fueled action.

A great deal has changed in American culture since the ‘80s, and after being burned out by consumerism we’re left with a kind of newfound callousness. Crockett and Tubbs look cool, but also dark and grim. Their personalities have been distilled into a kind of void, where Crockett is defined by his scraggly moustache and the kind of drinks he orders, and Tubbs is verbose without actually saying anything of any substance. None of the dialogue is particularly memorable, and none of the private moments with these cops reveal much about them. After Tubbs quickly screws his girlfriend and makes a joke, he rolls over and falls asleep. Miami Vice finds some heat in the sexual encounters, but not much affection, and it’s difficult to empathize with this Crockett or this Tubbs. And since we only see what they do to catch drug dealers, relying on their dogged self-determination at the expense of everything else in their lives, we never admire them as detectives. They’re straightforward aggressors.

When Farrell and Foxx are in motion, they’re able to coast along on their charismatic movie star presences. They’re never more effective than when loading their machine guns or roving through a night club in pursuit of one of the drug dealers, Whenever they latch on to one of the female characters—Foxx has a steamy shower scene with fellow cop Trudy Joplin (played by Naomie Harris) and Farrell has a dangerous liaison in Cuba with ice queen drug princess Isabella (Gong Li), the sweaty sex scenes are handled with the reverence for perfect bodies that Leni Reifenstahl might have applauded. But whenever Farrell is required to suggest a deeper range of feeling, such as conflicted guilt over sleeping with the enemy, or raging when the meddling F.B.I. screws up his case, or even when ordering a drink from the bar and philosophizing on the delicious taste of a mojito, Farrell falls back on a patented sorrowful 1,000-yard stare that’s impossible to buy. Foxx, on the other hand, has an arsenal of well-timed quips (“Smooth. That’s how we do it.”) and brooding frowns.

They’re no better or worse than Don Johnson or Philip Michael Thomas, but somehow the small screen is more forgiving of an actor’s limitations. Michael Mann has always fared better when casting great actors to deliver his epic scale dialogue, and Farrell and Foxx are lightweights in comparison to Robert De Niro and Al Pacino in Heat or Pacino and Russell Crowe in The Insider, or the underappreciated Will Smith in Ali. But then again, Miami Vice is a pretty lightweight movie with a threadbare premise and, in a way, it’s nice to see Mann attacking a movie that is unpretentious pulp. If it had the smarts to get in and out of its admittedly slim storyline fast, it might have been more enjoyable than it is.

The two-hour-plus running time is a massive amount of time to be hanging around with non-developed characters in relationships with women that they self describe as having “no future” and chasing South American drug kingpins who are well-acted by the goofy, fast-talking John Ortiz and the lean, meticulously still and quiet Luis Tosar but not given any scenes that burn themselves into our memory (aside from when some of the more unlucky bad guys get their brains spectacularly blown out in the grand finale, their blood splattering across canvas-sized walls like, as Tubbs describes it, a Jackson Pollack painting). Recent examples of slim premises that boasted strong and muscular cinematic style, not to mention a sly sense of humor Miami Vice generally lacks, were Cellular and Red Eye. Like the Miami Vice TV show, they got right down to business, whereas stretched to a big canvas with a series of big drug-deal set pieces (on planes, boats, exotic islands, and so on), it only sadly reveals that it’s all rather superficial and that no amount of style or hit singles or movie star posturing or obscure camera angles can make up for it.

Review: A Farewell to Arms