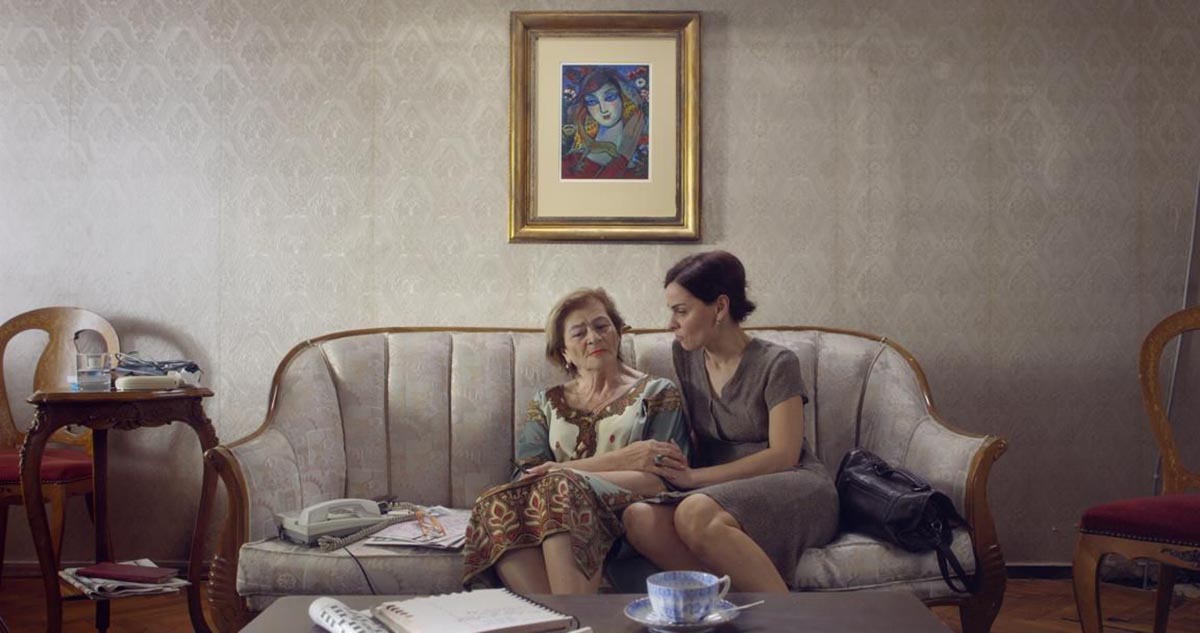 Georgian filmmaker Salome Alexi’s superb Line of Credit delicately skewers its characters’ expectations for the post-Soviet good life, walking a fine line between comedy and tragedy without revealing its hand until the bitter end. A lightness of tone is consistent across the film’s scenes, but they can turn serious on a dime; each follows a middle-aged restaurateur, Nino (Nino Kasradze), as she pursues yet another scheme to get the bills paid—even if it inevitably means agreeing to a ridiculous interest rate or pawning the family jewelry. Nino comes from aristocratic stock, and is told ad nauseam by her neighbors—either old ladies or male acquaintances who never got their chance—how well she’s managed to keep her beauty. The camera doesn’t get up close and personal to comment; her every quotidian encounter is instead photographed as if it were its own landscape. Embedded within resplendent widescreen images of the family villa’s interiors and its gilded bric-a-brac, all of which is enough for the neighbors to assume Nino is still rich, the heroine’s worried scowl stands out ever more conspicuously, as if her inability to loosen up is what’s keeping the frame locked. Alexi envisions Tbilisi as a city that bustles, but only for those who can afford it—overrun with debtors and potential debtors looking to make a quick buck.

After Nino pawns her mother’s wedding ring to pay for the old woman’s birthday party, her husband tut-tuts her, aligning the theft from Nino’s mother with her father’s habit of stealing from the Soviets. In one bruising scene, she welcomes a French tourist to her café—her first customer in hours—and, after he’s regaled with self-exoticizing myths about Georgia, a small group congregates for a toast. Nino catches herself unable to stop drinking, the tensile awkwardness of her despair only briefly threatening to derail the joint attempt at mundane pleasantries. As a neorealist drama about the middle class, Line of Credit is only subtly political: It’s revealed that Nino’s already-expensive family lifestyle became impossible following Russia’s 2008 economy-crushing incursion to South Ossetia—referenced just once in the screenplay. With or without geopolitical annotation, this is a film about life under poverty; its mix of droll awkwardness and cruel irony will resonate for anybody whose obligation to the past finds them barely managing to prop up the present.