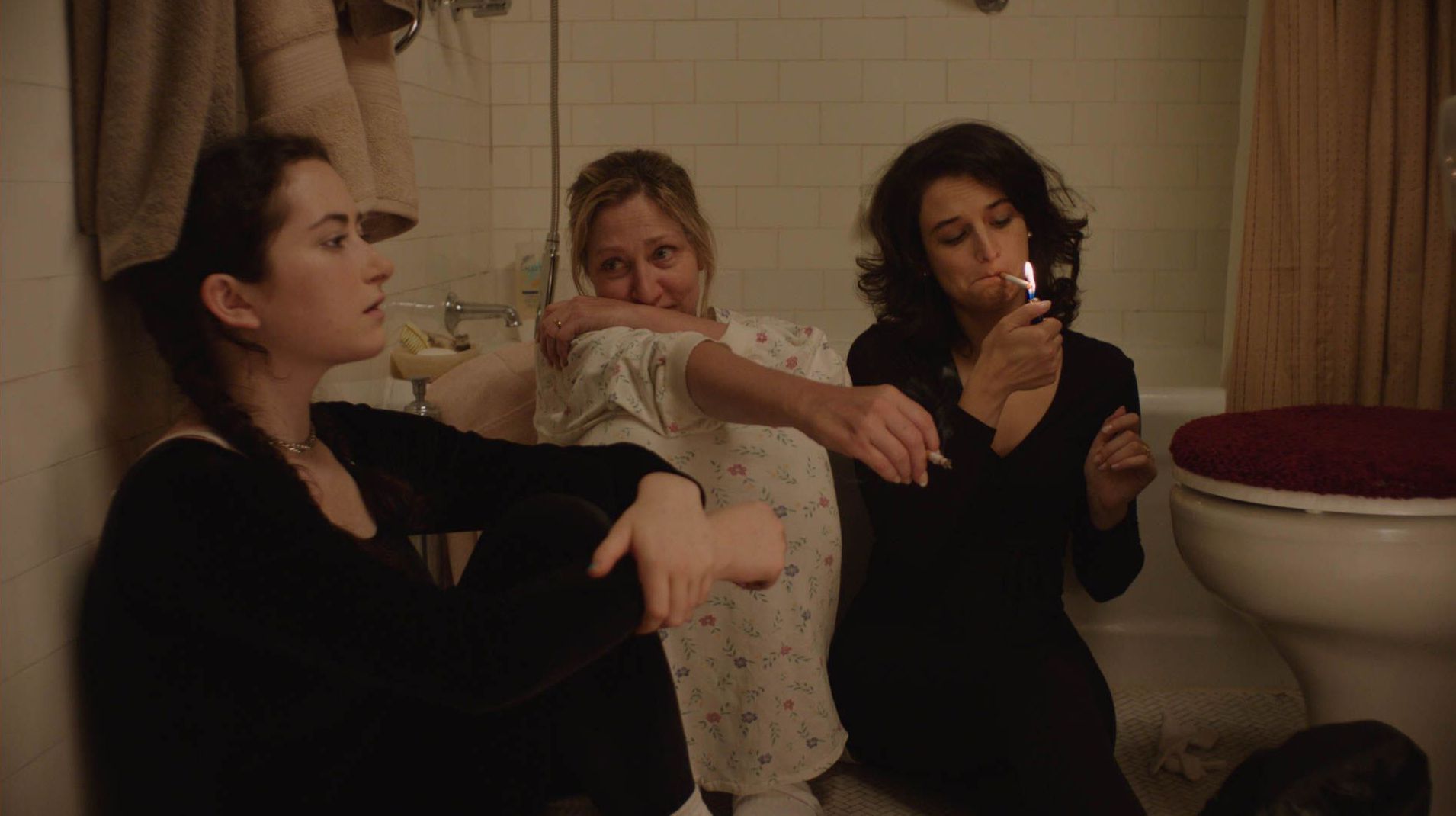 Set in 1995, Gillian Robespierre’s Landline brings to mind Edward Burns’s early films, which similarly sanitized themes and narratives that were once evocatively rendered by Woody Allen. But Burns’s films, namely The Brothers McMullen, see their clichés about New York City insularity complicated by glimpses of working-class grit, while Landline has been buffed and polished with merciless faux-indie-movie precision. The film’s plots parallel and crisscross one another with impersonal exactitude, so that the characters may learn their tidy ethics lessons on cue by the end credits.

Robespierre borrows from Allen and Burns a preoccupation with adultery as a hurdle to be cleared, confirming a relationship’s worthiness in the long haul. The potential chaos of adultery, or of anything else, is of no interest to the filmmaker. Dana (Jenny Slate) and Ben (Jay Duplass) are engaged when Dana hits it off with an old classmate, Nate (Finn Wittrock), at a party. It’s not hard to see why Dana would be tempted by Nate, who’s handsome and has a glint of contemptuous naughtiness in his eyes that threatens to inject the film with a dash of much-needed eroticism. Dana and Nate begin to sleep together, allowing Robespierre to stage a dirtier variation of a joke from Annie Hall: Nate goes down on Dana in a movie theater playing a Nazi documentary.

Dana’s affair parallels the infidelity of her father, Alan (John Turturro), a failed writer stuck in a marketing job who stores bad, horny poetry about his lover with amusing carelessness on a now ancient-looking computer. Alan feels ignored and condescended to by his wife, Pat (Edie Falco), who, in turn, resents her permanent casting by her family as the ball-busting villain. Caught in the middle of these affairs is Ali (Abby Quinn), Dana’s teenage sister, who snorts heroin while out late clubbing. Heroin is to Landline what abortion is to Robespierre’s Obvious Child: a dangerous little variable planted to strategically unsettle the pervading cutesiness.

The two affairs and the drug use cumulatively reveal a family at a crossroads, and it’s remarkable just how little any of these complications matter as staged. It feels as if Robespierre and co-writer Elisabeth Holm started at the screenplay’s conclusion, with the family somewhat reordered yet reconciled as a testament to the pervading strength of monogamy, and worked their way backward through the requisite plot turns. Any potential detail that could complicate Robespierre’s theme is discounted: What if enjoying good sex with a hot guy over dutiful sex with a prig doesn’t necessarily make one superficial? A potentially funny and resonant irony—that sex with Nate makes Dana a hungrier lover with Ben—is relegated to the film’s best scene, in which Dana demands that Ben assert himself and talk about her “pussy.”

It never occurs to Robespierre that men come in more flavors than “hot” (Nate) and “nerd” (Ben and Alan)—that men can be nerds and demons in the sack, which might’ve further complicated Dana’s crisis of boredom. In fairness, this sort of reduction gluts American cinema, even Allen’s films, though the best of them reveal a bitter id that Landline is hesitant or unable to access. It’s also long past time to call a moratorium on NYC-centric failed writers who populate films only for the purpose of underlining a family’s arty-liberal bona fides, which are reaffirmed by Ali’s requisitely biracial lover, Jed (Marquis Rodriguez), who, like the biracial girlfriend of Azazel Jacobs’s The Lovers, is on hand for no other reason than to illustrate how wonderful everyone is for never mentioning or noticing race—a rarefied Caucasian-film trope that was hopefully incinerated by Jordan Peele’s Get Out.

Landline isn’t sexist or racist, but it is thoughtless, name-dropping as it does cultural tensions that don’t ultimately interest it for the sake of courting boutique East Coast credibility, which is signified as well by the meaningless references to the Clintons. Turturro, Falco, and Quinn’s performances are so finely, precisely honed that they threaten to upset the film’s self-pleased applecart, but Landline rests on the shoulders of Slate, who’s as desperate to please the audience with her theoretical adorability here as she was in Obvious Child. As in Robespierre and Slate’s first collaboration, the studied amiability of Landline becomes obnoxious.

Review: Valerian and the City of a Thousand Planets