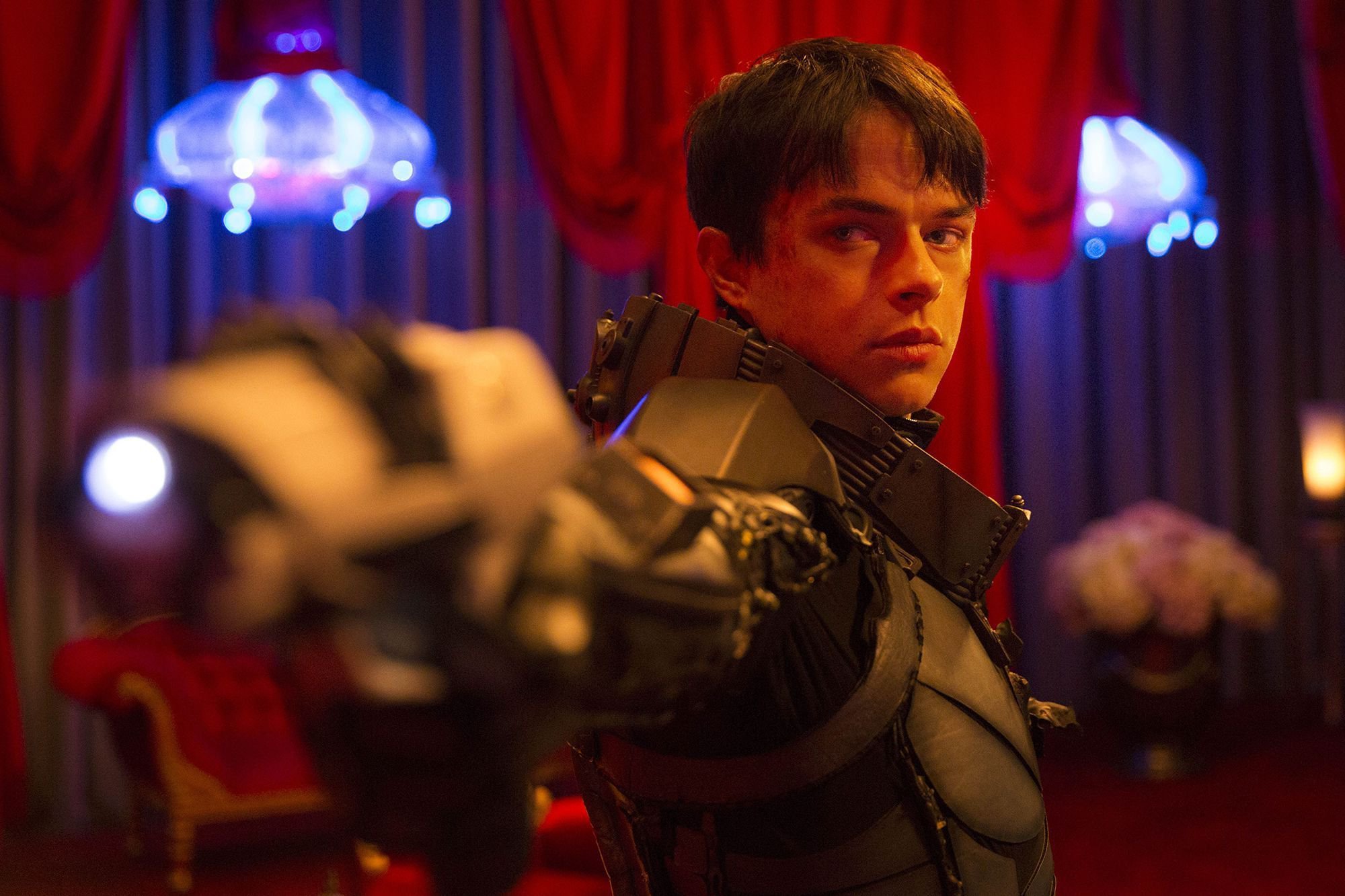 Director Luc Besson’s Valerian and the Planet of a Thousand Cities is an unabashed exercise in wall-to-wall eye candy, irretrievably drunk on the power of image-making. Within the first five minutes, the question is less whether Besson’s screenplay “works” and more whether the film’s clearly elephantine budget can possibly sustain itself for the next two-plus hours.

Such as it is, the storyline itself barely merits acknowledging: Valerian (Dane DeHaan) and Laureline (Cara Delevingne) are 28th-century space cops, armed with the expertise and tools to jump from one dimension to another as required by their missions—handed down by an inter-species federation, based in a gargantuan spaceship-complex, presided over by Commander Arün Filitt (Clive Owen). Valerian wakes with a start after a nightmare in which he witnesses the destruction of a peaceful oceanic planet, whose inhabitants resemble the Na’vi from James Cameron’s Avatar. From there on out, the screenplay is one long string of chase sequences and near-misses, action-figure-ready creature reveals, and painfully leaden one-liners.

At first glance, this film would appear to mimic any number of other sci-fi extravaganzas, but to call its world formulaic or derivative would be fairly ignorant of how it got here. While George Lucas’s original Star Wars harkened back to 1920s adventure serials and airborne World War II movies, for European comic fans it unmistakably ripped off Jean-Claude Mézières and Pierre Christin’s graphic novel Valerian et Laureline, which ran from 1967 up to 2010. Besson remedied the offense somewhat by contracting Mézières to help design his no-less-flamboyant classic The Fifth Element, whose futurist aesthetic owed as much to Mézières as it did to Jean-Paul Gaultier.

If every page in this film’s screenplay is fodder for still more CGI-swollen psychedelia, the sensibility between characters (human or extraterrestrial) is surprisingly antic, somehow undercutting the pomp assumed by an event movie of this scale. Besson is a preternatural showman, and this is one of his signatures: Even his debut feature, Le Dernier Combat, managed to undercut the pressure of its post-atomic-holocaust milieu with Three Stooges-worthy physical comedy and over-the-top sight gags.

Weirdly comparable in their elvin looks, DeHaan and Delevingne seem to opt out of the verisimilitude question, accommodating the pixelated terraforms rendered around them without betraying skepticism about the material. DeHaan at first seems painfully ill-cast, but the plucky, airheaded nature of Valerian’s interactions with Laureline (to whom he proposes in their first scene together, and who inevitably comes around to saying “yes” by the grand finale) effectively goad the audience into playing (as opposed to buying) along. The film makes it impossible to determine whether this “problem” lies with the script or the performances—and that’s a good thing. With so many hundreds of millions of euros hanging in the balance, you’d think this core of un-self-seriousness would imperil the film’s experience, but it somehow instead manages the uncanny feat of humanizing it.

Long before a gooey blue shapeshifter (embodied in her human form, and voiced, by Rihanna) has helped Valerian sneak into a Lewis Carroll-worthy sacrificial alien banquet, viewers will have had ample opportunity to decide whether this is the ride they lined up for. The critical lens to be applied here is obvious: In the crowded marketplace of mega-budget summer tent poles (which have steadily relied on militarism, mass murder, and soft-Randism to sell their tickets for the better part of two decades now), the political symbolism of Besson’s script feels facile and rushed. The androgynous denizens of the coral-reef society obliterated in the first act become refugees against the Federation that employs Valerian and Laureline; that Filitt is, in fact, one of the bad guys will surprise nobody who’s ever seen a film before.

As in The Fifth Element’s cheesy climax, capital-L love conquers all, but that’s also no spoiler: These invocations of statelessness and genocide are just means to the end of delivering state-of-the-art, soda-slurping entertainment. While Valerian and the Planet of a Thousand Cities manages that for a surprisingly brisk 137 minutes, the difference between it and its equally expensive contemporaries is probably Besson’s playful, childlike naïveté.