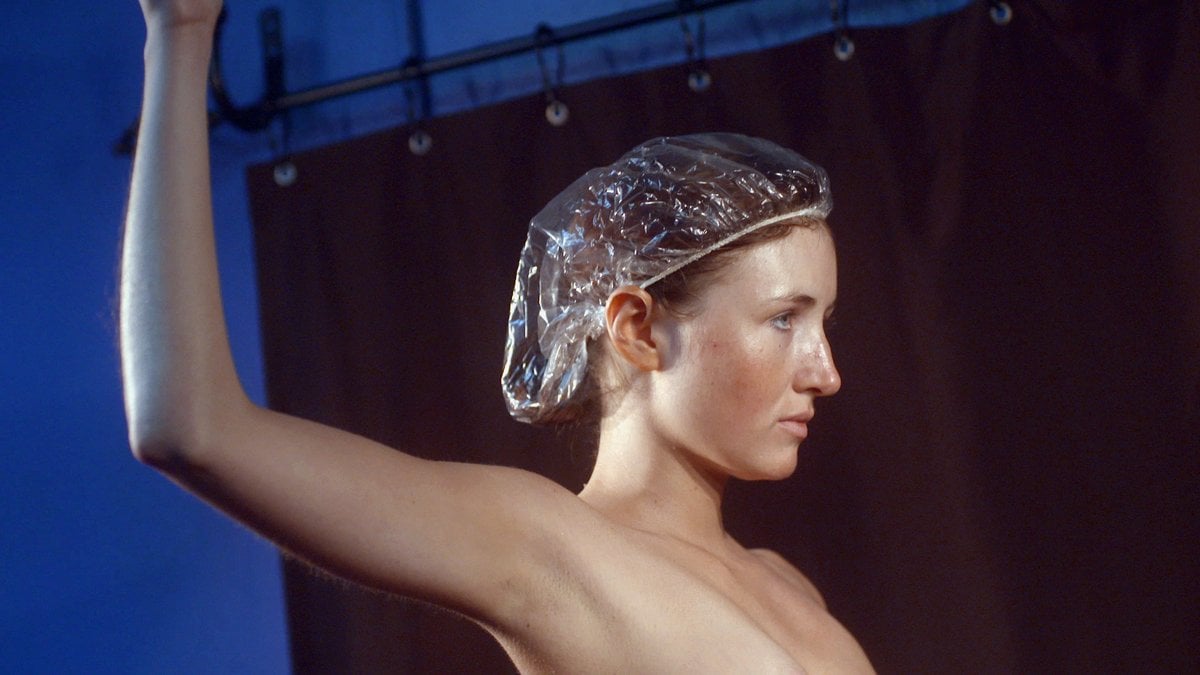 Robert Greene’s Kate Plays Christine pivots on several paradoxes: of acting, which involves self-expression via self-effacement; of media, which parasitically feeds on people, offering audiences catharsis while enslaving them with feelings of inferiority; and of the relationship between fiction and nonfiction, which is characterized by an illusion of distinguishability that affirms the greater illusion of the existence of objectivity. These paradoxes bleed into one another in head-spinning fashions in this extraordinarily rich and ambitious film, underlining the subjective fluidity of existence.

One of the commonalities between these paradoxes, as Greene chooses to wrestle with them, is their concern with the perils and limitations of empathy, as the film revolves around several intersecting quests for understanding. Greene follows actress Kate Lyn Sheil as she wanders Sarasota, Florida attempting to channel, for a film role, the spirit of Christine Chubbuck, a local television news reporter who notoriously committed suicide on the air in 1974, subsequently inspiring Sidney Lumet’s Network.

The macro of this project is Greene and Sheil’s contempt for the populace’s obsession with sensationalism, and the irresolvable fact that their endeavor exists out of the same concerns, which inspires self-disgust that they’re attempting to implicatively work through by locating in Chubbuck’s story a core of unearthed human nuance. As one of Chubbuck’s friends and former colleagues says near the end of the film, Greene and Sheil wouldn’t be interested in her if she was just another reporter who once had a news show.

Reminiscent of Truman Capote’s In Cold Blood and Bob Fosse’s Star 80, Kate Plays Christine is self-consciously structured around an opportunistic suspense device that it also relentlessly interrogates. In this case, we’re led to anticipate Sheil’s performance of Chubbuck’s suicide, which represents the ultimate sop to commercialism as well as, potentially, a fulfilling of Greene and particularly Sheil’s quest for transcendence, in which Chubbuck is triumphantly resurrected and then destroyed as a form of protest art.

Greene and Sheil’s preoccupation with the sensationalism of media parallels Chubbuck’s own frustrations with her job, which also reflect her grappling with sexism, depression, self-loathing, and sexual repression (30 years old when she killed herself, she’s said to have died a virgin). But this isn’t the most interesting element of Kate Plays Christine. At times, the film is shrill and preachy—unable to reconcile its hypocrisy with its awareness of the same. But the micro of this production, the tactile details that Greene captures of Sheil’s process of self-exploration while preparing for the role (which is shown to bear sporadic fruit in the soap-operatic film within the film that shakily blends the past and present), are often profound.

Quite a bit of Kate Plays Christine is concerned with the intimate details of preparing a performance, the things we might take for granted as instinctive to an actor’s art rather than painstakingly arrived at. Sheil plays several roles here: a highly controlled, quasi-fictional version of herself that highlights the element of performance that’s integral to documentaries; Chubbuck; and, most intensely and astonishingly, a kind of synthesis of Sheil and Chubbuck, which shows an actor in mid-transformation, revealing the vulnerabilities of their art as heightened embodiments of the vulnerabilities of being.

At the beginning of the film, as Sheil prepares to leave New York for Sarasota, it’s evident that she already feels kinship with Chubbuck, sharing the latter’s need for validation from her work, stemming from a sense of invisibility and longing that’s common to sensitive artists. Aspiring artists, particularly the introverted and the depressed, often have a fantasy of being “completed” by their art, of earning through their art the right to the happiness that they feel that everyone around them accepts as a given. For actors, this is where the riddle of self-expression by self-effacement comes into play, as they’re to command our attention by fusing their most vital elements with a misleadingly fictional pretense that’s really, perhaps, the most pure and unbridled portion of their personality: their id, their creative drive.

It may be shocking for Sheil’s admirers to hear of how dissatisfied she often is with her work. Whether or not she’s contriving this motivation to sync up better with Chubbuck’s frustration is beside the point. This emotional dimension is real either way, once it’s rendered for film and experienced by the audience, who will then internalize Sheil’s internalization of Chubbuck’s loneliness to resonate with their own loneliness. Sheil voices frustration with her critical reputation for being “subtle,” which she seems to take—wrongly—as implicit acknowledgement of her failure to command center ring, which the Chubbuck role promises to offer her, though she feels responsibility to honor a subject more fragile than herself.

Sheil visits a wig shop, where the elderly female wig maker creepily assures her that she’s better looking than Chubbuck, whom the wig maker truthfully says was so “somber and sad-looking.” Throughout the film, the wig often sits uneasily, sometimes comically, on Sheil’s head, as she navigates Sarasota, tentatively treading Chubbuck’s footsteps. Initially, the wig obscures Sheil, without bringing out another personality in her place, giving her an existentially empty and recessive quality; she’s facing an actor’s nightmare of pointless effacement before a performance has yet been forged.

In the wig, Sheil attends a Fourth of July party, talking to Sarasota locals, tellingly, about aging out of sexual desirability, which Sheil says has already happened for her. This sequence climaxes with an amazing image: Greene’s camera, positioned behind a silhouette of Sheil’s wigged head as she looks up into the Florida sky, captures fireworks exploding in slow motion, the soundtrack rhyming the explosions with bursts of gunfire from a revolver, the weapon that Chubbuck used to kill herself. Regarding this silhouette, we feel the vast distance Sheil feels from society as she channels her estrangement into Chubbuck’s own isolated essence.

In another scene, Sheil goes to a gun shop called The Bullet Hole, where Chubbuck purchased her revolver, though we’re told that this transaction occurred at a different location. Sheil has a conversation with a gun merchant that’s politically resonant precisely for how carefully non-confrontational it is. Sheil asks the man various logistical questions as herself, and then Greene stunningly cuts to another version of the scene in which Sheil is obscured by her wig, playing Chubbuck buying a gun. The poignancy of this effect comes from the fleetness of Greene’s editing, as a nearly invisible cut instantaneously turns Sheil into a sketch of Chubbuck, reaffirming the vulnerability of both identities.

Later, we learn that Chubbuck was an excellent swimmer, and so Sheil, who says she’s a poor swimmer, goes to the beach in swimsuit and wig, paddling in the ocean as the score swells. Chubbuck haunts this film as a material ghost, with Sheil almost literally trying to find her, and by extension herself, the daunting difficulty of this task asserted when the wig washes off her head in the water, floating in the ocean like a link to unfathomable past.

Greene’s triumph is a poetry of specificity. Everything Sheil does casually testifies to the tremulousness of her state of being. When she wears a stocking over her head, preparing her scalp for the wig, her skin altered by spray tan, her eye color changed by contacts, we feel from her a power of anonymity. Near the end, as she comes closer to fulfilling her version of Chubbuck, we sense the authority that springs from wrestling with interior demons, contextualizing and perhaps briefly taming them so as to gain insight into another. Sheil’s sloped, sad, sensual physicality gradually takes on the angularity that Chubbuck displays in the news footage that Sheil and Greene finally discover of her. And Sheil’s subtly inquisitive voice gains a curt hardness that shows why Chubbuck might’ve had trouble attracting friends and lovers: Her intense need manifested itself as thorniness, the need becoming a perverse and ironic repellent of what’s needed.

Kate Plays Christine movingly posits acting as a metaphor for the search for connection, through visceral texture rather than platitude. An actor wishes to connect with a role so that they might connect with themselves, and so that we might connect with their character through the various impure tendrils of corporatized media. Every connection forged in this film seems to reveal the need for further connection, suggesting that one step forward equals two steps back—an elusiveness that’s dramatized by the rigorous nesting imagery that abounds in frames within frames, offering humans within multiple intermediaries. One feels that Greene is wrestling with this project as much as Sheil, pondering his right, as a man, to make a film so tethered in female identity. That’s why he had to show his work, offering the making of a film as the film itself: Universality resides in the corporeal uncertainty of creation.

Review: The Sea of Trees