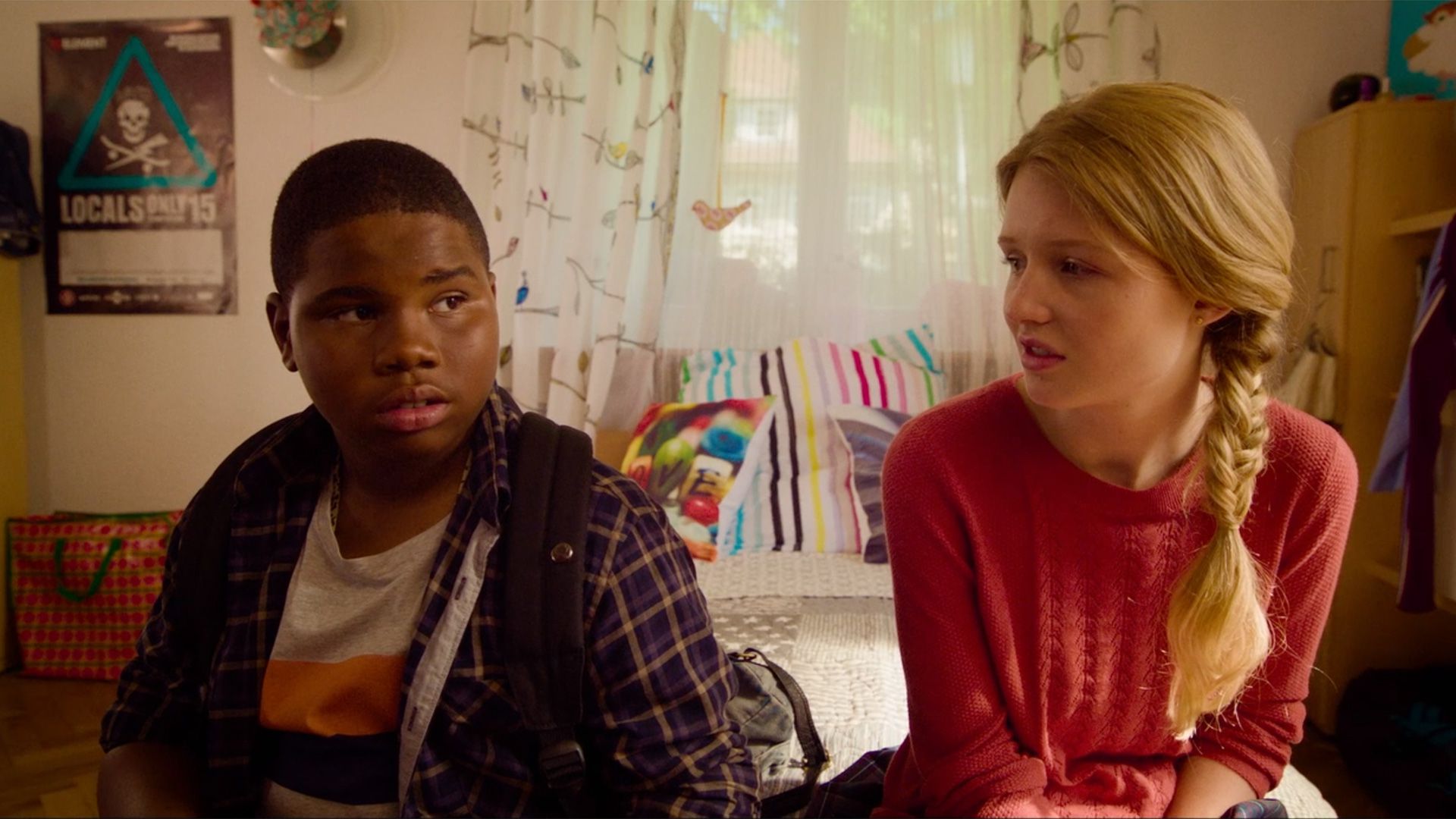 Roughly halfway through writer-director Chad Hartigan’s Morris from America comes a scene familiar from countless coming-of-age movies, wherein the eager yet inexperienced protagonist makes a stumbling entreaty toward the borders of sexual initiation. Alone in his bedroom, young Morris (a remarkably understated Markees Christmas) hastily constructs a replica of a woman from his pillow, a pair of sweatpants, and the blue cardigan left behind by the object of his affection. Makeshift woman in arms, he first engages in a prelude of slow dancing, gently squeezes and paws at his creation, then undresses it as a segue into some tender, hesitant humping.

What’s notable about this scene is how Hartigan’s tight close-ups emphasize the ragged gaps in the structure of his would-be romantic scenario; the filmmaker spotlights Morris’s messily made bed, the boxers blooming out from his low-slung athletic shorts, and the overall awkwardness of his unsure movements. The mood music (Miguel’s twisted slow jam “Pussy Is Mine”), meanwhile, is assured but not exactly romantic. These specific details form a composite image of Morris’s crude understanding of what sex entails, gleaned from a fascination with hard-edged hip hop, a wrinkled porn magazine found on the side of the road, shreds of offhand paternal advice, and a fraught flirtation with an older woman. It’s enough to sustain, just for a moment, the workable fantasy that the 13-year-old Morris knows what he’s doing, before leading to a final Cinderella-esque realization, shared by character and audience alike: Stripped of its costume, the pillow is once again just a pillow.

The care and empathy exhibited in reconstructing this boilerplate scenario, and transitioning it from potential comic mockery to a compassionately conveyed facet of an increasingly complex character, says a lot about the film’s slyness. Specifically, it signals the way in which the film’s loose conglomeration of familiar genre tropes and story beats is shaped into something shaggy but poignant, a Frankenstein’s monster of textures, gestures, and emotions that reflects Morris’s scattered mental state. The pillow scene ends up characteristic of the film as a whole, its would-be typical format skirting cliché but never surrendering to it. Guided by the stumbling progress of Morris’s development, and its distinctive fish-out-of-water scenario, Morris from America fulfills all the dramatic obligations of the heartwarming prestige indie, without falling victim to triteness or banality.

The story kicks off as Morris is transplanted by his father, Curtis (Craig Robinson), to picturesque Heidelberg, a sleepy medieval-era burg, where Curtis, a former semi-pro soccer player, has been hired on to coach the local team. Possessed with the strange freedom that marks a summer vacation spent in a foreign country, Morris spends his mornings learning German with the help of an obliging graduate student, Inka (Carla Juri), and his afternoons barely using the language at the local youth center. Surrounded by strangers, the boy transforms from a charming, amiable jokester into a taciturn outcast, the general weirdness of his circumstances exacerbated by his cruel German counterparts, who tease him for his perceived lack of basketball skills, accuse him of dealing marijuana, or taunt him about his weight.

Morris receives a different reaction from Katrin (Lina Keller), an impish, generally aloof popular girl whose physical maturity is countermanded by a childish impulsiveness. Sick of the town’s close-minded staidness and bored by her juvenile classmates, Katrin takes an interest in Morris, one that vacillates between mocking flirtation, genuine concern, and surreptitious bullying. The question of whether Katrin is toying with Morris, legitimately invested in his outsider appeal, or some mixture of both, however, is inevitably moot. Extending goodwill far beyond its central character, Morris from America doesn’t presume to know the answer, since Katrin likely doesn’t herself. Too many films of this type ascribe sympathetic confusion to their protagonists while setting the behavior of similarly aged antagonists in stone, separating “good” kids from “bad” ones in a de facto system of juvenile codification. This, instead, is the rare film that doesn’t forget the overwhelming turmoil of adolescence, and how even the most confident, adult-seeming teenagers have absolutely no idea what they’re doing.

Beyond this textured portrayal of budding angst, Morris from America is especially perceptive about the effect of external influence on personal development, particularly how a conglomeration of bittersweet moments, experiences, and lessons coalesce together to nudge a boy from blissful childhood ignorance to empirically established manhood. As the film’s primary positive role model, Robinson does great work as Curtis, balancing the character’s steady, unconditional love and patient understanding with a sense of the man’s own feelings of confusion and unease.

At the same time, Morris from America offers a substantial undercurrent of subtextual detail, quietly commenting on the trickle-down effects of a missing female role model (Morris’s recently deceased mother) onto a male household, while metaphorically conveying the plight of stateless migrants (the boy’s symbolic partners in modern Western European alienation). Stylishly telling a slim story in subtle fashion, without surrendering to narrative or formal small-mindedness, Hartigan maintains the same benevolent, low-key depiction of turbulent events as he did in 2013’s This Is Martin Bonner. This film may present a more commonly told story, tracing it out along many of the same rhythms and beats as similarly toned Sundance brethren, but the emotional space it carves out is ultimately uniquely its own.

Review: Kampai! For the Love of Sake