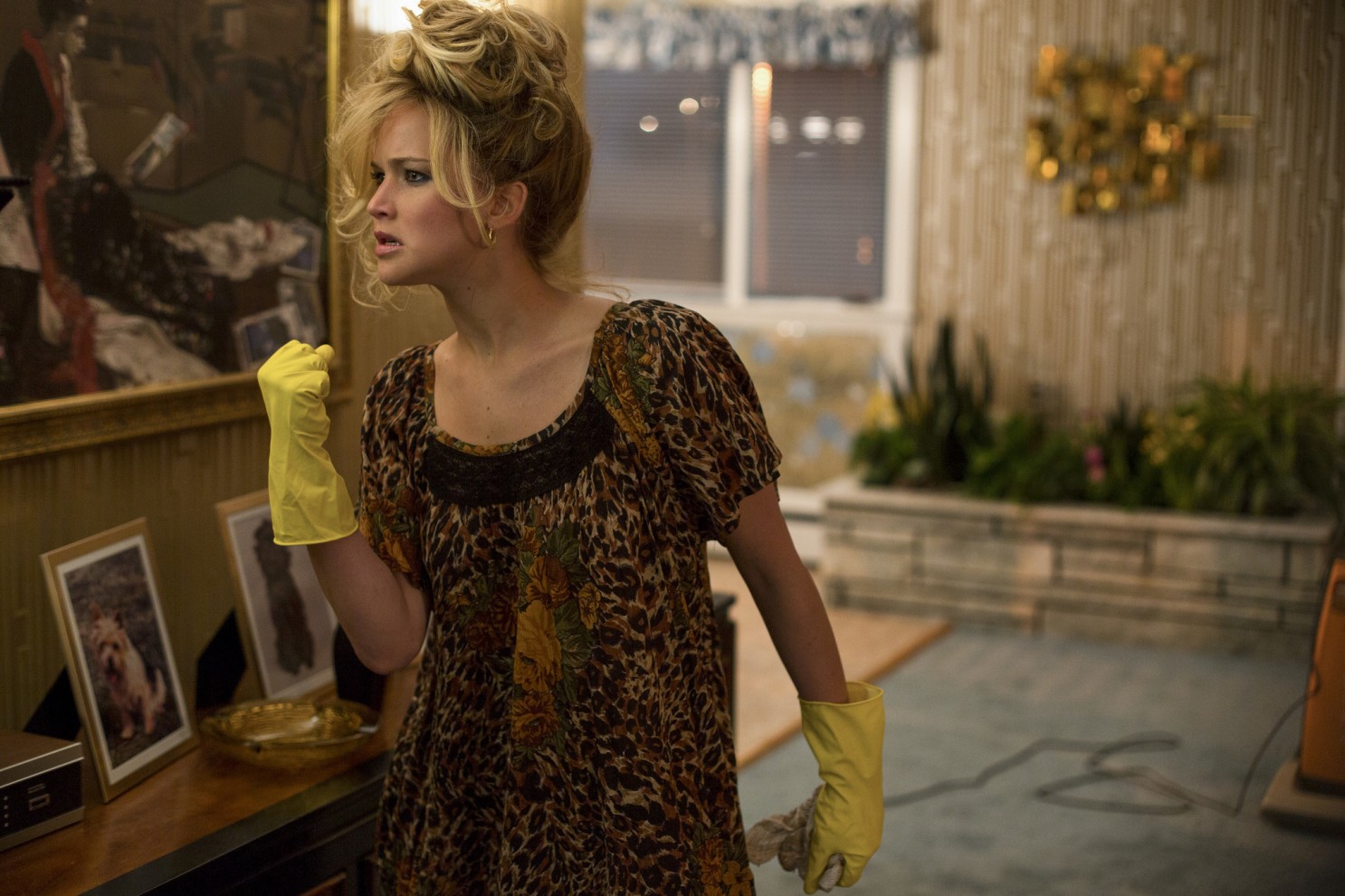 The image of women spontaneously combusting while doing housework was one of the most popular tropes of filmmaking more than a century ago. In a widely viewed early film from 1903, Mary Jane’s Mishap, a British housemaid accidentally immolates herself while attempting to light a hearth fire with paraffin and subsequently explodes out of the chimney. It was, of course, not uncommon for 19th-century women to catch fire in their own homes when their bulky hoop skirts would graze against an errant spark from the fireplace. Women spontaneously combusting in their own homes was a frequent hazard of the time that journalists then tastefully referred to as “crinoline conflagrations.”

Comical media images of women exploding provided outlets for spectators to laugh off the hazardous politics of everyday domesticity. While many aspects of the relationship between gender politics and media culture have changed since the early 1900s, we still harbor an unconscious tendency to laugh at otherwise horrific images of violence inflicted on women’s bodies. Fortunately, 21st-century domesticity isn’t quite so fraught with the perils of instantaneous conflagration. Yet, the image of women catching fire—quite simply as a metaphor for women’s ambitions to be visible at all—continues to spark our cultural imagination.

And perhaps no other movie star walks this fine line between media visibility and human calamity as deftly as Jennifer Lawrence. There’s something oddly literalistic about the actress’s star appeal. From her “electricity” with Bradley Cooper, to her near-fatal calamity with a 1970s microwave in American Hustle, to her iconic portrayal of “The Girl on Fire” in The Hunger Games trilogy, Lawrence draws on a long tradition of female combustion in cinema.

Images of women exploding on screen have recurred throughout film history, from The Finish of Bridget McKeen (1901), to Rebecca (1940), to The Stepford Wives (1975), to Silent Hill (2006), but the contexts of gendered combustion have shifted tremendously. In early 1900s movie-going and everyday life alike, fire was a paradoxically banal calamity. Women in hoop skirts would catch flame in the streets due to unextinguished cigar stubs littering the sidewalks, while high-heat nitrate film projection practices caused over 500 theater fires in 1905 alone. Fire was a commonplace incident that strongly marked the public’s associations with the volatile new medium of cinema. 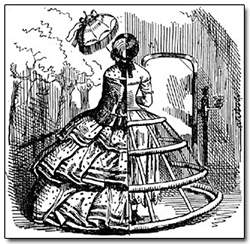 Today, CGI techniques—that provide for a seemingly limitless manipulability of the image—make media bodies appear anything but perilous. We have come to believe that no matter how many times an iconic protagonist catches fire, gets stung by tracker jacker bees, pelted with fireballs, or inundated by blood rain, any real violence done to the body can ultimately be made reversible.

For example, last winter Huffpost Celebrity reported, “Jennifer Lawrence Has Meltdown at Catching Fire New York Premiere.” Huffpost consoled its worried Lawrence fans: “After weeks of zipping across the globe to promote…Catching Fire, Jennifer Lawrence finally lost it, and we don’t blame her one bit…Take a break, girl!” Tabloid gossip culture has seized on the enduring image of women combusting as a metaphor for celebrity mental health. Just as Panem’s medical industry can piece Katniss Everdeen’s dismembered and incinerated body back together in the fictive dystopia of The Hunger Games, celebrity rehab clinics and spa resorts promise to heal the psychological traumas of incessant publicity. But Lawrence, despite tripping over her train on the red carpet, doesn’t conform, like Lindsay Lohan, or Britney Spears, or Amanda Bynbes, to the troubled starlet archetype; she picks herself right up and jokes about it during her awards acceptance speeches. As Buzzfeed puts it, she’s the celebrity gal pal you would most like to have nachos with. In other words, we feel bonded to J. Law precisely through her self-deprecating normalcy, rather than through her potential for human catastrophe.

When permanent damage encroaches on Lawrence’s lighthearted star iconicity, usually its implications are cosmetic and innocuous. Last November, Catching Fire director Francis Lawrence apologized for forcing Lawrence into her blond pixie cut: “We fried her hair, I feel bad!” He continued: “She used to give me a hard time about the hair because I was always saying, ‘Dye your hair, dye your hair. We need your hair dyed, no wigs!…And then of course, dying her hair fried her hair, so she had to cut her hair.’” Yet there’s clearly much more at stake here than a famous woman’s new, short haircut. It’s precisely because Lawrence encourages us to laugh off the real violence and damage imposed on her by a celebrity-obsessed media industry that we stand to inherit something from her dyed hair frying.

Even in a lark like American Hustle, Lawrence’s domestic run-in with a new microwave appliance—promoted by Columbia Pictures as “Jennifer Lawrence Catches Fire”—becomes a poignant moment of comedic truth telling. She reminds Christian Bale’s disaffected Irving, “You know I read that it [the microwave] takes all the nutrition out of our food; it’s empty just like your deals…You bring something into our house that is going to take all the nutrition out of our food and then light our house on fire—thank God for me.”

Of course, we know that microwaves don’t literally zap the nutrition out of otherwise healthy meals—just as we understand that Lawrence’s Rosalyn might have been feeling a bit suicidal when she decided to ignore safety warnings and heat a metal dish in the microwave. Yet, we appreciate that Rosalyn might really have a valid point. Microwaves participate in the commodification of convenient, high-sodium, empty-calorie meals: TV dinners. Her insight comes in the form of a reversal or paradox, and it takes a near-fatal kitchen combustion to jolt us into awareness.

The question remains—not, who would you rather have nachos with than Lawrence, but whose astonishing metamorphosis or even violent self-immolation would you find more awesome and inspiring? Lawrence may be hailed as “the most electric talent,” but the literalism of this electricity is perhaps not so exceptional. 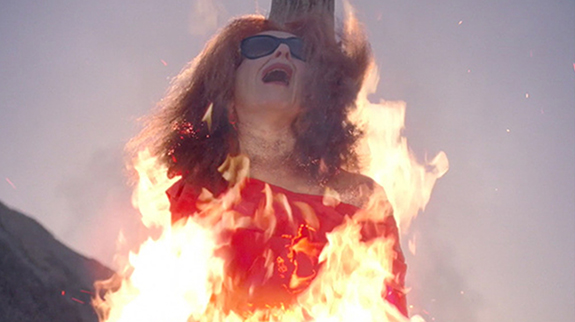 For example, in season three of Ryan Murphy’s anthology series, American Horror Story, Myrtle Snow gets burnt at the stake only to rise again and return to her coven. Myrtle’s darkly comedic immolation—harkening back to Mary Jane’s Mishap and early domestic catastrophe films—reminds us how much we love to watch instances of horrific violence inflicted on women’s bodies. Myrtle death by burning—ultimately impermanent and reversible—haunts the endless cycles of violence and redemption that we impose on women in celebrity media culture. From Judy Garland’s career lasting barbiturate addiction to Anna Nicole Smith’s yo-yoing weight gain and topsy-turvy paternity lawsuits, we seem to have a magical belief in the redemptive power of female train wrecks.

Given that the body of the woman so often stands in for the health of the nation (in metaphors such as the motherland, lady liberty, etc.), we really cannot take too seriously the implications of our utter fascination with female combustion. Culture, politics, and global economy all collude to reinforce our hunger for watching women go up in flames; only then will they learn the true meaning of responsibility and care of the self. From paparazzi-stalked celebrities, to pregnant teenagers given their own reality TV shows, to recent attempts to parlay the kidnapping of 276 Nigerian schoolgirls into an argument for homeschooling, we love to spotlight women in tight situations as a rhetorical incitement to cultural reformation.

Take the most recent installment in the Monica Lewinsky saga as a revealing example. Lewinsky has spotlighted herself again in a recent Vanity Fair article, in which she seeks final reconciliation and redemption from her scandalous past. She asserts: “It’s time to burn the beret and bury the blue dress.” Lewinsky’s choice of words suggests a bait and switch whereby the symbolic torching of her infamous intern garments would finally put an end to the tabloid publicity inflicted on her. From a White House-wrecking seductress to a witch-hunted woman, abandoned by feminists and exploited by political operatives, Lewinsky has taken up an intriguing range of gendered metaphors to try to reclaim her own media narrative. She has offered up her beret and blue dress in effigy in exchange for a reprieve from her metaphorical yet insistent burning at the stake.

As Texas Republican Congressman Pete Sessions has recently reminded us, we absolutely do still believe in witches. Responding to recent Democratic criticisms that the new Republican Benghazi committee is a “witch hunt,” Sessions responded: “Well, Mr. Speaker, that must mean that there is a witch somewhere.” Rachel Maddow has incisively debunked Sessions’s witch hunt fallacy with a combination of Salem Witch Trials archival history and a Monty Python reference. Yet, the powerful mythology that “there is a witch somewhere” has thoroughly permeated our media and political culture. This obsession has become so ingrained in what we fundamentally believe that perhaps it can no longer be simply debunked. Disproving the mythology of witches—women blowing up for our pleasure so that we can heal and ultimately improve ourselves—would require no less than an upheaval of our entire cultural system of belief and its economic underpinnings.

The interesting thing about Lawrence, despite all of her tabloid moments and embarrassing mishaps, is the extent to which she manages to shirk the gendered clichés of her own association with combustion. “The Girl on Fire” and blue mutant assassin who narrowly evades public execution on screen will not be burnt at the stake—so long as she continues to perform these lighthearted, innocuous incidents to defuse our more destructive obsessions. She will blow up her microwave from a safe distance while wearing a ludicrous blond wig, manufacture a phony teenage romance to survive a grizzly battle royale, or morph into a blue-skinned, yellow-eyed time traveler to evade a firing squad. As her character in American Hustle puts it, “Thank God for me.”

Summer of ‘89: The Evil that Five Screenwriters Do Lives On—See No Evil, Hear No Evil