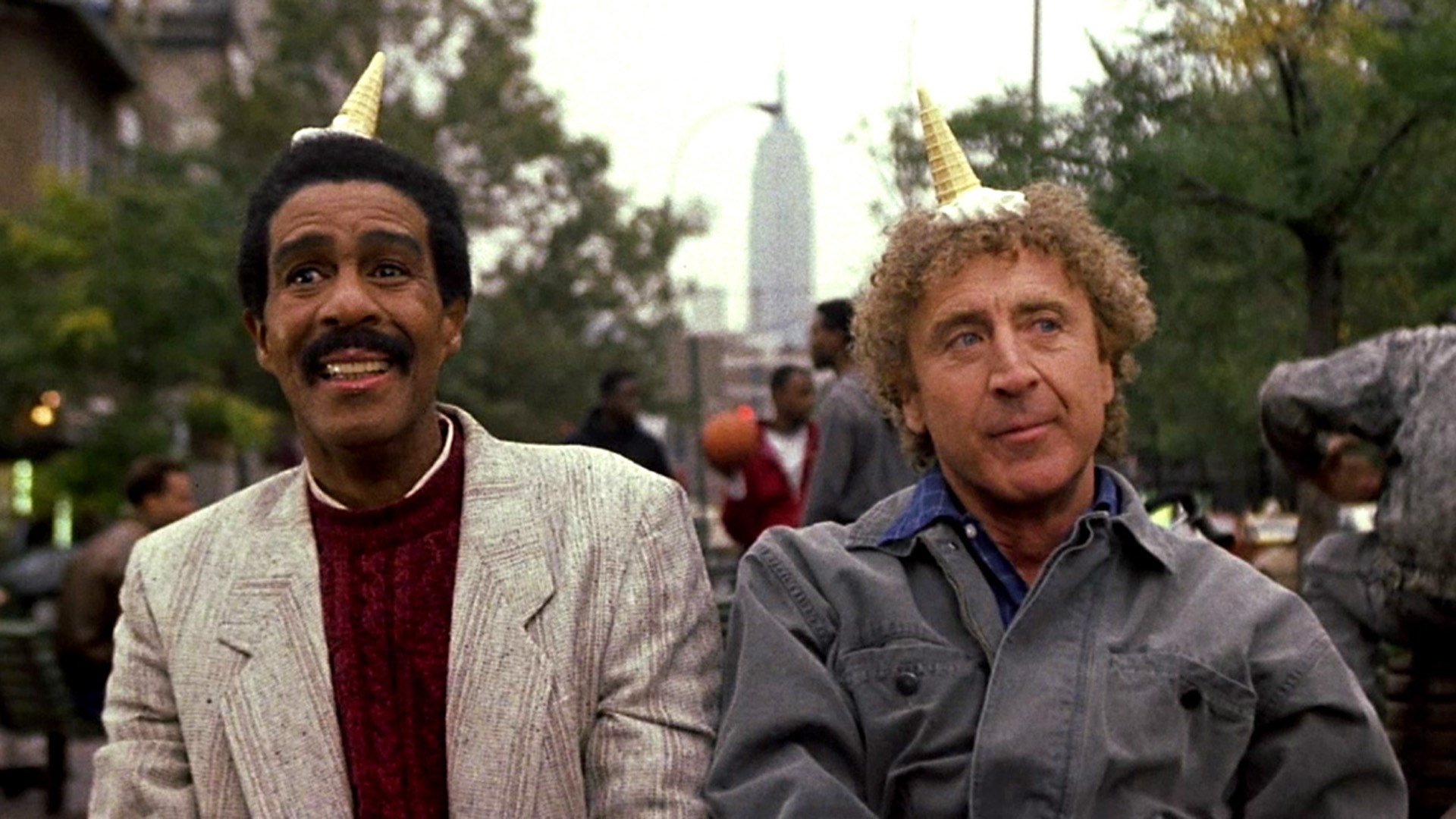 It’s hard to speak no evil about See No Evil, Hear No Evil, the third on-screen collaboration between Richard Pryor and Gene Wilder. It bears the stench of missed opportunity. Trapped inside its overwritten crime story is a breezy character study starring two men with genuine chemistry and a flair for both physical and verbal comedy. In the rare moments when Pryor and Wilder simply talk to each other, there’s the potential for a funny and poignant interracial two-hander like I’m Not Rappaport. It’s too bad that potential is squandered on a senseless murder plot.

Pryor plays Wally Karue, a blind man who constantly tries to hide his blindness. He gets a job working at a newsstand run by Wilder’s Dave Lyons, a deaf man who shares Wally’s misguided pride about his affliction. The duo do a fair job masking their missing abilities: Dave reads lips and Wally is a pro at commandeering his other senses for navigational purposes. Together, they complete one another, a dependency made palatable by the realistic friendship vibe Wilder and Pryor create on screen.

The actors are so credible together that one forgives a lot in this movie. A fight scene between Wally and some bar bullies could have easily ended with Dave punching out the guys himself, but we’d be robbed of the sheer joy of watching these guys work through a conjoined piece of physical slapstick. Later, when their attempt to impersonate European doctors goes spectacularly awry, the two work off each other so well it saves a poorly written scene. Pryor’s fake accent is a delicious cross between the Swedish Chef and the neighborhood wino from his stand-up routines.

The screenplay is a poorly stitched-together patchwork of ideas, which shouldn’t be a surprise, as See No Evil, Hear No Evil is credited to five writers, including Wilder, who supposedly rewrote it before signing on. He most likely added the extra character-based tangents to this film, elements like Wally’s gambling vice and the underlying bitterness that comes when one is suddenly robbed of hearing or sight. Both actors have effective scenes where they describe how their disabilities came about, and whether or not they’ve come to live with this reality. Pryor’s description of how he went blind is a howl of fury that the film unwisely protracts in favor of getting back to scenes of kidnapping and murder.

Arthur Hiller, who helmed the duo’s first collaboration, Silver Streak, tries to combine the suspenseful espionage of that film with the plot about an innocent man wrongly accused from Stir Crazy. Wally’s bookie stumbles into the Union Square building where Dave’s newsstand resides. He’s pursued by a tall, gorgeous woman from the Brigitte Nielsen-in-Beverly-Hills-Cop-2 school of murderous babes. In addition to setting the plot in motion with a pistol, Eve (Joan Severance) provides occasional eye candy for the half of our duo who can actually see her.

Courtesy of Eve, Wally and Dave become the proprietors of a dead body, shot in broad daylight in the lobby of a huge New York City building. They’re the only witnesses, if you can call them that; Wally only smells Severance’s Shalimar perfume as she exits the building, and Dave doesn’t hear the gunshots at all. He only sees Severance’s dynamite legs as she walks away post-murder. Neither of them know about the mysterious gold coin the bookie left in Dave’s change box, a coin Eve will return for at some point.

While Dave and Wally deal with an incompetent NYPD who thinks they’re capable of cold-blooded murder, Eve meets up with her partner in crime, Kirgo—a wonderful name for a character, but as played by Kevin Spacey, he comes off as the dramatic version of Kevin Kline’s Otto from A Fish Called Wanda. Kirgo advises Eve that she must wipe out the witnesses, and lucky for her, she’s committed murder in the least trafficked lobby in Manhattan.

Posing as their lawyers, Kirgo and Eve try to spring Dave and Wally. Their sense memories identify Eve, and the game is afoot. From here, See No Evil, Hear No Evil veers sharply into ’80-action-movie territory, with blind car chases, mistaken identities, and family members in jeopardy. It all leads to a crime boss who shares a common trait with Wally. Having a blind hero and a blind villain is a nice touch, but the crime story is rendered useless by its convoluted nature.

Audience goodwill toward the Wilder-Pryor pairing hadn’t yet run out in 1989, and this movie was a hit. It topped the chart for two weeks back in 1989, making way for the astonishingly bad fourth pairing of these two actors, Another You. In that film, Pryor looks extremely ravaged by M.S. His physical deterioration is more than hinted at in See No Evil, Hear No Evil, but the comic spark in his eyes hadn’t yet been extinguished.

Watching this again, armed with the knowledge of Pryor’s fate, I felt a pang in my heart for what could have been. As leading men, this was the penultimate film for both of them, and unlike their last film, it’s not so easily dismissible. Its wasted potential is an evil one can neither unsee nor unhear.

Interview: James Gray on The Immigrant, Joaquin Phoenix, and More