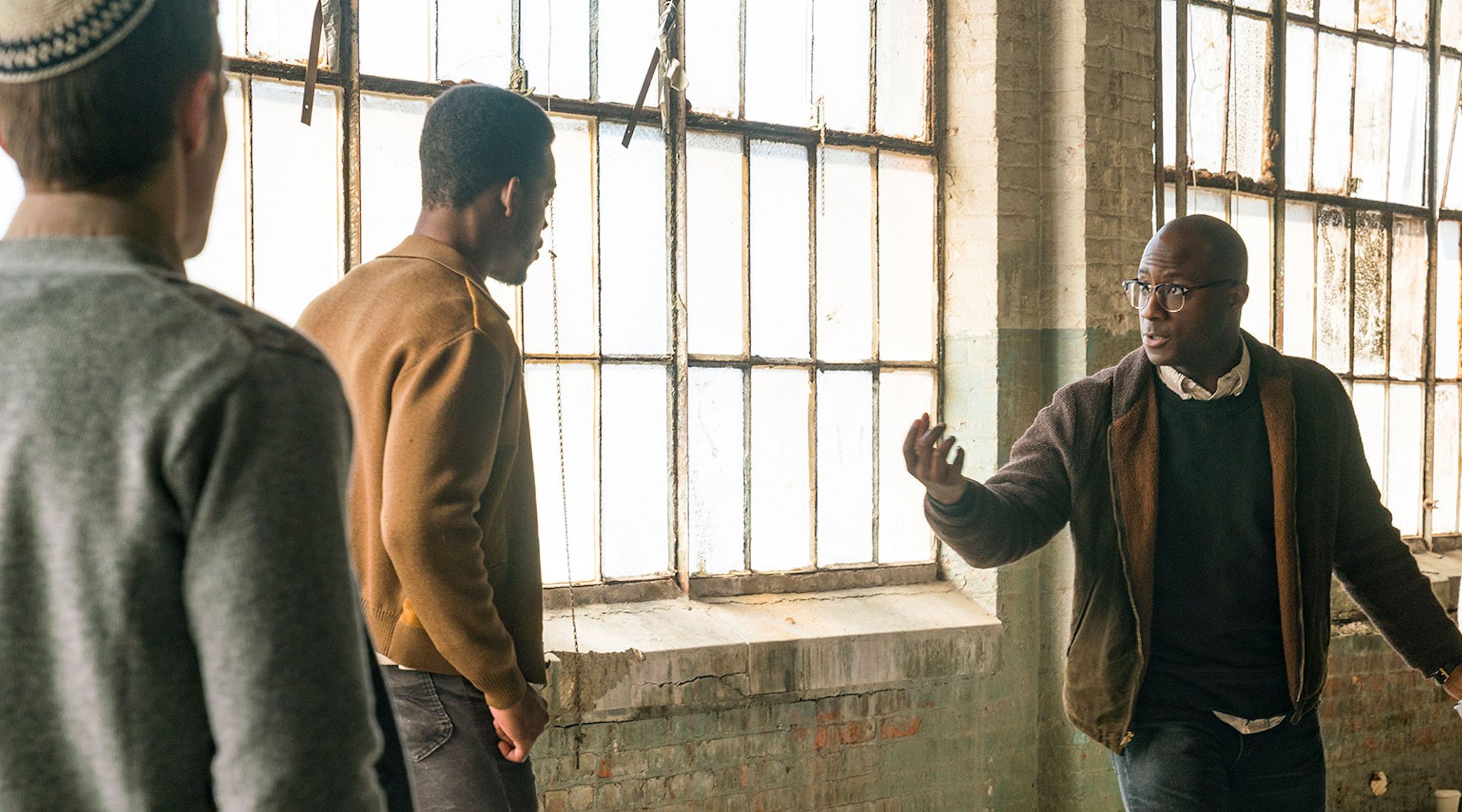 Just over a decade ago, Barry Jenkins was scrapping together $15,000 to make his debut feature, Medicine for Melancholy, with the help of his friends. He’s now an Academy Award winner for his Moonlight screenplay, as well as the first person given permission to adapt the work of the formidable James Baldwin for the big screen. What’s more, he’s emerged as an eloquent ambassador for global cinema due in large part to his ability to seamlessly merge disparate expressive qualities of the medium.

On the page, If Beale Street Could Talk juxtaposes the sensuality of Baldwin’s prose in describing two young black lovers, Tish and Fonny, with stern indignation about the racism that keeps them apart. Jenkins’s adaptation of the 1974 novel rejects “either/or” thinking and embraces “both/and,” just as the author himself did. Remaining true to the story’s novelistic roots doesn’t mean Jenkins needed to abandon his expressionistic influences, nor does it entail emphasizing one side of Baldwin’s story at the expense of another.

Jenkins proves equally adept at radiating love in a sumptuous, fleeting close-up as he is at articulating the horrors of the American prison system in the film’s extended dramatic centerpiece, a dialogue-heavy exchange between Stephan James’s Fonny and Brian Tyree Henry’s Daniel. Throughout, he deploys archival photography of ‘70s-era Harlem, wordless grace notes observing the characters in relation to the space around them, and narration taken from Baldwin’s novel to similarly potent effects.

In a phone conversation after the release of If Beale Street Could Talk, I spoke with Jenkins about his artistic inspirations, how he’s developed his cinematic voice, as well as how his film functions as a bookend to Something Good Negro Kiss, a recently unearthed, 19th-century depiction of filmed black love.

While pursuing your career as a filmmaker, you were also working as a curator and presenter at the Telluride Film Festival. Did that role ever shape the artistic sensibilities of your own work?

Going to Telluride definitely helped shape the way I work. Some of the filmmakers that I admire the most I discovered there, like Lynne Ramsay. But programming the shorts has been interesting. I think it keeps me mostly [invigorated by] a bit more aesthetically risk-taking things I see each year, some of which I see through programming the shorts. In that way, it keeps me very curious about the form. I can’t say that anything has directly made its way into my work, but I think there’s no doubt about the way we make films has a lot to do with the way we ingest films. And watching that body of work every year, well, I see films there that I can’t see any other way.

I want to ask you about Something Good Negro Kiss, the 1898 short film, because you’d retweeted a fan video where someone imposed some of Nicholas Britell’s Beale Street score over it. I actually want to quote you to explain why I think that video works so well, and this is from your Esquire essay on James Baldwin: “We don’t expect to treat the lives and souls of black folks in the aesthetic of the ecstatic. It’s assumed that the struggle to live, to simply breathe and exist, weighs so heavily on black folks that our very beings need be shrouded in the pathos of pain and suffering.” And your film and that score allow for these characters not to be defined by that, even if they do exist in it. Do you feel that, paradoxically, the future of black love on screen is in the past—more contextualization in the ecstatic?

I think it was interesting to see. I was shocked to see that footage, for one, especially working on [the miniseries adaptation of Colson Whitehead’s novel] The Underground Railroad right now. And then, I think, there was something really lovely in this connectivity. This film literally came out on Friday, and it was one of—if not the only—major release on Friday that featured a black couple in the act of love. You go from the earliest depiction of this love on screen to now, because we just came out, essentially the most recent depiction in a certain way. What was electric for me about it was the through line, the connectivity. We always talk about generational trauma, but what about generational joy? Generational love? That’s what I found in the video.

I don’t think about that Esquire too much. So, it’s interesting to hear that quote read back to me. I’m like, “Oh, yeah, that’s right.” In the unearthing of that video, the idea of the ecstatic even existing in 1898 seems to be a foreign concept to most. And an artistic depiction of black people, to see it realized in that way in this microfilm, paired with our music, is breathtaking.

You’ve spoken about your love for directors like Claire Denis, Wong Kar-wai, and Hou Hsiao-hsien. What attracts you to emulate them, and do you have any theories about why so few others are citing them as inspiration?

I don’t know! Wong Kar-wai, because of the Quentin Tarantino co-sign in the ‘90s, just kind of jumped into the vanguard. We kind of underestimate the cultural and social impact that Tarantino had on the independent film community in the ‘90s. So, for him to co-sign Wong in the way that Tarantino did just pushed Wong into this conversation, made him extremely visible. Case in point, I discovered Wong because Tarantino’s face was on the cover art for Chungking Express and was on the spine at Blockbuster.

But I don’t know why the other filmmakers aren’t cited as much. I felt the same thing in them that I felt when I first saw a Wong film, which was an expansion of the possibilities and what’s feasible within a frame. There are all these conventions about what form a story can take and how far the medium can be pushed. In Wong’s films, in Claire’s films, in Hou’s films, you see this complete disregard for convention. What comes from that is art and metaphor that can only arise in the way it does. It’s just completely singular the way they work, and that grabbed me when I initially started studying cinema.

You’re already developing a “signature shot” where a character, usually close to dead center of the frame, moves slowly but intensely against a background in shallow focus, and seems to make communion, if not outright eye contact, with the camera. How did you come to develop this shot with DP James Laxton, and was there ever a doubt after Moonlight that you’d deploy it on If Beale Street Could Talk?

No, there wasn’t. There was only doubt on Moonlight if we would deploy and if we could get away with it, to be honest. It kind of all began with Naomie Harris in a certain way. We were doing the scene with her in the courtyard where she confronts Ashton Sanders’s character, Chiron, about the money. We were filming that scene, and it just clicked in my head that the most immediate way to do it would be with her directly addressing the camera. And then, because we did all of Naomie’s work in three days, the next time we did it was when it really took root. When she and Little are standing in the hallway, when she’s just yelling at the camera, that was the first time when I was like, “Oh, this is a thing! The thing that we’re trying to arrive at, this is the perfect medium to do it.” That was where it really took root. And even doing it on that film, I understood that the best way to do it was spontaneously. It needed to be these moments where performance-wise, the remove, the distance between the actor and the character, had somewhat disappeared.

Because of the story we’re telling, and in an attempt to arrive at interiority in cinema that gets more proximal to the interiority of literature, we were going to employ it on Beale Street. It’s interesting, because James and I haven’t really worked out mathematically how far the actor needs to be from the lens and things like that. It arises spontaneously, and we do it by feel. The actors could reject it and say, “No, I don’t want to do it,” but they always agree to.

You’ve mentioned toying with the ending of If Beale Street Could Talk to make it end on a slightly more positive note than Baldwin, and the feeling reminded me a lot of the conclusion of Moonlight, as we feel a bit of hope for these characters while also recognizing the road ahead for them is going to be tough. You’ve mentioned, at least for Beale Street, that you felt the audience needed this. But is it all reflective of any of your own optimism?

It absolutely is. I will say, I speak about it in the way you reference now because the movie is screening for audiences. And oftentimes, I’m engaging with the audience and having this discussion. But when the decision was made, because that was an addendum to our main production shoot, it was a decision I had to make myself. It wasn’t about the audience’s considerations, it was about what I wanted from the film. That decision derives directly from my personal needs and wants for the work. And trying to be really diligent about what the work I’m creating says about the world. And I did want to say that, despite the story being quite heavy, there was hope in the scenario that the characters go through—and the strength that they found to endure.

Interview: Pawel Pawlikowski on the Making of Cold War