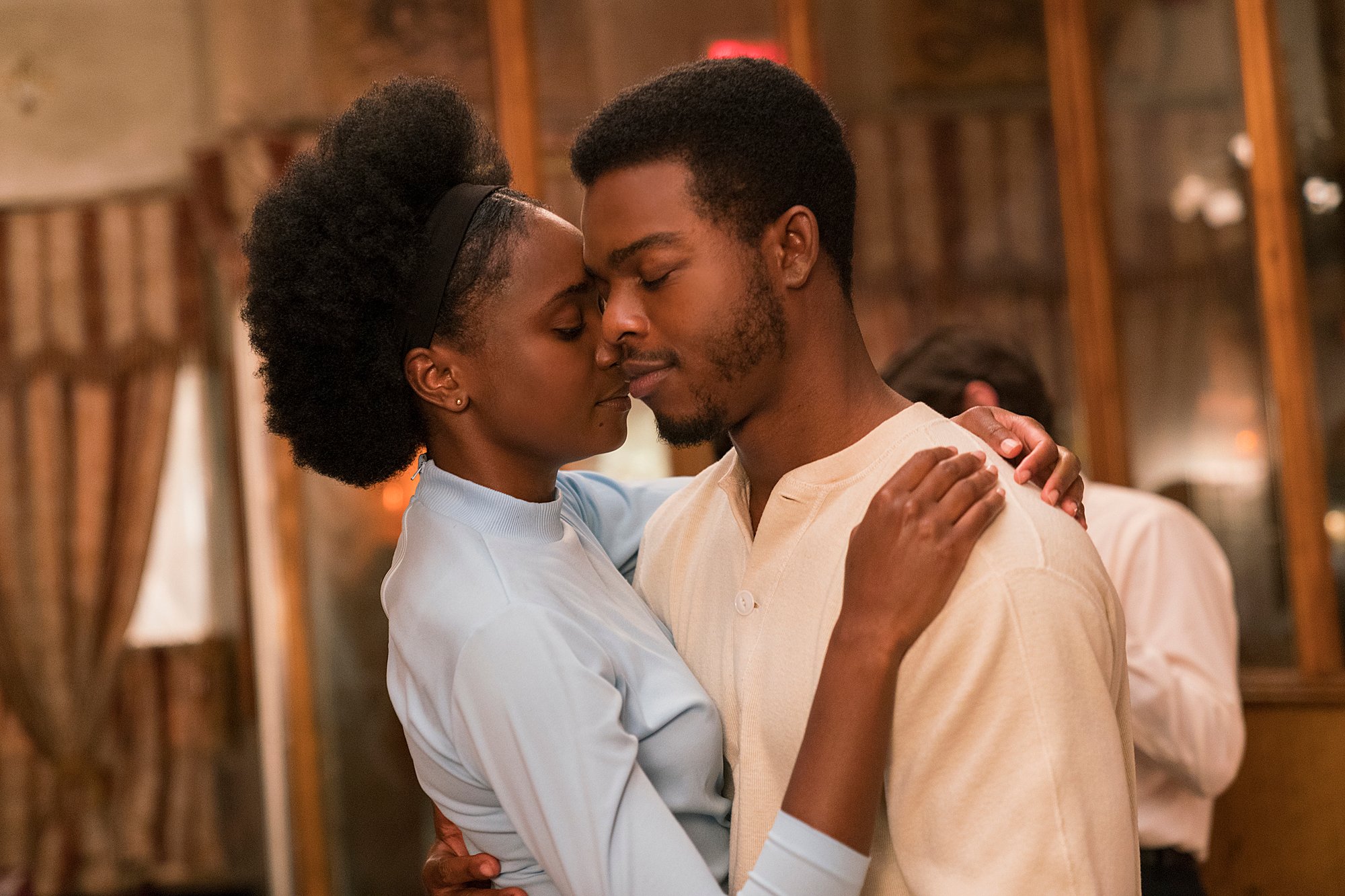 “Do this book, or die,” says James Baldwin of his creative process in the 1989 compilation The Writer’s Chapbook. “You have to go through that. Talent is insignificant. I know a lot of talented ruins. Beyond talent lie all the usual words: discipline, love, luck, but most of all, endurance.” You can sense such endurance in every frame of If Beale Street Could Talk, Barry Jenkins’s superb adaptation of Baldwin’s 1974 novel of the same name, which the writer-director penned in the same period—the summer of 2013—as the script for Moonlight. There’s a hunger, a need for imaginative expression, in both films, and it’s especially pronounced in If Beale Street Could Talk, given the tragic and tender yearnings between the two African-American youths at its center.

Tish Rivers (KiKi Layne) and Alonso “Fonny” Hunt (Stephan James) have known each other since childhood, and now, at 19 and 22, respectively, their feelings have taken a decisive turn toward the romantic. Tish is pregnant with Fonny’s child. But Fonny, an up-and-coming sculptor, is in prison awaiting trial for the rape of a Puerto Rican woman, Victoria Rogers (Emily Rios). It’s a crime he insists he didn’t commit. As in Baldwin’s novel, Tish narrates the proceedings with semi-omniscience, dipping in and out of her own memories as well as incidents involving family and friends where she wasn’t present but likely heard or knew about. In this way, the audience gets as much a sense of her keen intuition as it does her direct experiences.

One of Tish’s first lines, describing her encounter with Fonny in a prison visiting area, comes straight from Baldwin: “I hope that nobody has ever had to look at anybody they love through glass.” That about cuts to the heart of Jenkins and cinematographer James Laxton’s heartrending compositions, which often take a page from the late Jonathan Demme’s work with their reliance on gaze-into-the-lens subjective camera. (Demme’s great and still under-appreciated adaptation of Toni Morrison’s novel Beloved seems a key influence.) In the film, as in much of Baldwin’s body of work, the deepest connections are often made through overpowering obstructions, if not a literal piece of glass, then a more horrifically nebulous barrier like pain or prejudice.

Tish and Fonny’s love for each other lifts them from despairing depths, though what both Baldwin and Jenkins are exploring is how the world—America in particular—puts such romantic purity to the test and often ravages it. An early scene in which Tish and her mother, Sharon (Regina King), reveal Tish’s pregnancy to the family hints at the larger trials to come. Though Tish has clear strength of character, her body language is hesitant, especially in the presence of her father, Joseph (Colman Domingo), who seems as if he could at any moment tip over into patriarchal rage. (In If Beale Street Could Talk, male domination and white domination are infernal bedfellows.) It’s a metaphorical cliff’s edge for Tish. Then her sibling, Ernestine (Teyonah Parris), speaks up. “Unbow your head, sister,” she says emphatically, giving Tish some literal backbone. With this stunning display of communal strength, the dread-infused mood of the room shifts. We often need other people to save us.

If Tish can now better navigate the hardships of home life—as evidenced by her remarkable confrontation, taken almost verbatim from the book, with Fonny’s judgmental “holy roller” mother (Aunjanue Ellis)—both she and Fonny are much more understandably at sea when it comes to the adversities of society. The main villain in If Beale Street Could Talk is Ed Skrein’s transparently racist cop Officer Bell, who, it’s strongly implied, sets Fonny up for the rape charge. It’s arguable whether his character is shallow more by accident or by design. He embodies all the blunt cruelties of white supremacy (“I’ll be seeing you around,” he seethes at Fonny), and if recent history has taught us anything, that kind of monstrousness is invariably skin-deep and knee-jerk. What you see really is all you’re getting, which doesn’t prevent a sizable part of the population from pretending otherwise.

Jenkins is working in a primarily lyrical and expressive mode, so the one-note nature of characters like Bell or the kindly Hispanic waiter Pedrocito (Diego Luna), always at the ready with a free meal for Tish and Fonny, makes perfect sense; they’re living proof that the world is either against the young lovers or for them. Any sequence featuring King also tends toward sublime, eloquent melodrama, particularly the section in which Sharon goes all the way to Puerto Rico to seek out an alibi for Fonny. When she arrives at the airport, Jenkins films Sharon with iconic elegance; she’s the determined mother to end them all. In the next scene, he complicates her steely and regal bearing by having Sharon weigh whether a wig or her natural hair better projects the strength she needs to display—a moving moment of vulnerability.

If Beale Street Could Talk is at its most potent, however, in the scenes where human frailty and the specter of injustice come more elliptically to the surface, as in a long dialogue scene between Fonny and Daniel (Brian Tyree Henry), an old school chum. At first it’s all soothingly friendly chitchat between the two men. Then things slip into dolefully dark territory as Daniel recalls his time in prison: “The white man’s got to be the devil. He sure ain’t a man. Some of the things I saw, baby, I’ll be dreaming about until the day I die.” What hits hardest about Daniel’s recollections is his overall sense of exhaustion. If constant subjugation doesn’t kill you, it’s suggested, then your soul is forever crippled, which is in many ways a worse fate. How can anyone walk through life with their spirit so completely paralyzed?

And yet, people do. This is the great tragedy of Tish and Fonny’s story: To survive in America, they must acquiesce to its repressive strictures. Neither Baldwin nor Jenkins sees this as a necessarily permanent state of affairs though. In the novel, Baldwin cedes the final passage to Tish and Fonny’s child at the moment of its birth (”…the baby cries and cries and cries and cries and cries and cries and cries and cries, cries like it means to wake the dead”), its wailing heralding new consciousness and conscience. Jenkins departs from that, concluding his film adaptation on a deceptively quiet note between the new family after they’ve more fully adjusted to a highly imperfect reality. It’s nonetheless an ending very much in harmony with Baldwin, dually infused with rage at what has occurred (innocence crushed underfoot) and hope, via the tabula rasa expression of a child, for what might be.