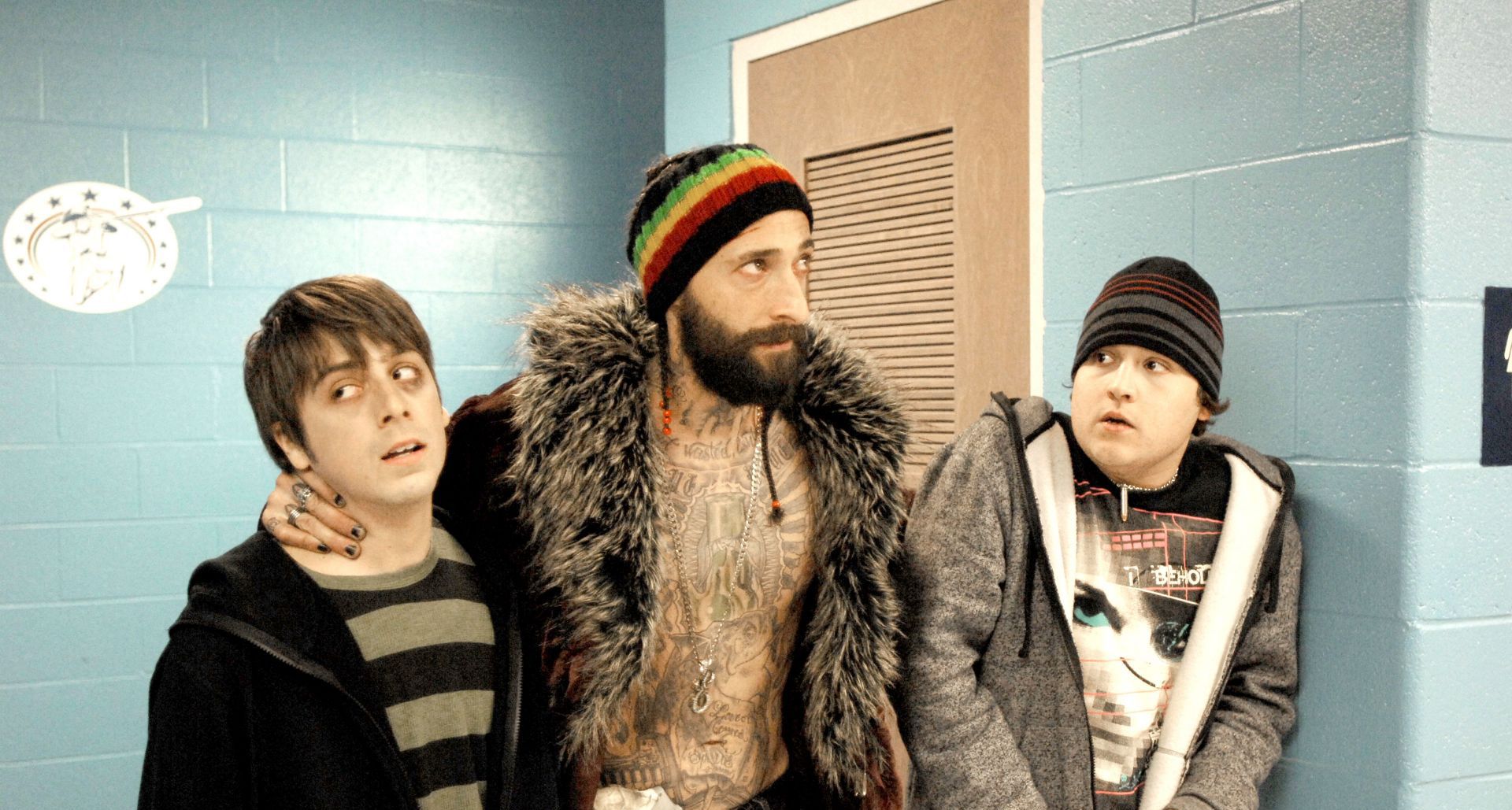 As sure as marijuana gets you high, you can count on weed-themed comedies cropping up every few years, each hoping to become a stoner-classic staple—a fate to which High School falls far short of achieving. John Stalberg’s film distinguishes itself from its buzzed brethren courtesy of Oscar-winner Adrien Brody, who for perplexing reasons—the chance to go full-on gonzo? The desire to pay back a debt? An accidental wrong turn onto the set?—co-stars as Psycho Ed, a drug-dealing lunatic with a ponytailed beard and full-body tattoos visible underneath his fur-collared coat. Brody’s performance, marked by one twitchy eye and frequent conversations with a “what?”-croaking pet toad, is strange enough to temporarily lift this otherwise standard-issue saga of potheads fighting the system. Here, that dynamic takes the form of MIT-bound potential valedictorian Henry (Matt Bush) attempting to avoid expulsion by party-pooper Principal Gordon (Michael Chiklis) after he tokes up with his pothead classmate Travis (Sean Marquette) the day before school-wide drug tests. That dilemma necessitates a daring plan involving stealing Psycho Ed’s high-powered ganja and dosing bake-sale brownies with it, which will lead to everyone testing positive for narcotics and, thus, invalidate the results, saving Henry’s future in the process.

That it does, though Henry and Travis’s path to freedom is first laced with all manner of hijinks involving kids and faculty (including Colin Hanks’s assistant dean, and teachers played by The Simpsons’s Yeardley Smith and Revenge of the Nerds’s Curtis Armstrong) acting whacked out of their minds. According to High School, marijuana makes teens sleepy and confused, and adults express their innermost deviant sexual urges. An old lady tells the off-key orchestra, “That sounded like a wet fart,” and a clueless stud spends the day trying in vain to find administrative offices, but the exaggerated behavior of young and old characters alike has a cartoonishness that’s as dreary as Henry and Travis’s rapport, which gradually develops from testy to supportive.

Chiklis brings no energy to his slow-talking pompous principal, and Adhir Kalyan’s evil nerd (a rival to Henry’s valedictorian throne) is equally one-note and unamusing. More pressing, however, is the mechanical nature of the proceedings as a whole, which have Henry land a date with his dream girl (Alicia Sixtos) by slamming Hamlet and Shakespeare, and triumph over possible security-cam footage failure via his conveniently useful hard drive-frying science project. Eventually squandering even Brody’s spazzy dealer through shenanigans so unimaginative that a dull distract-and-sneak gag is used twice, the film proves incapable of striking even a faint comedic spark.