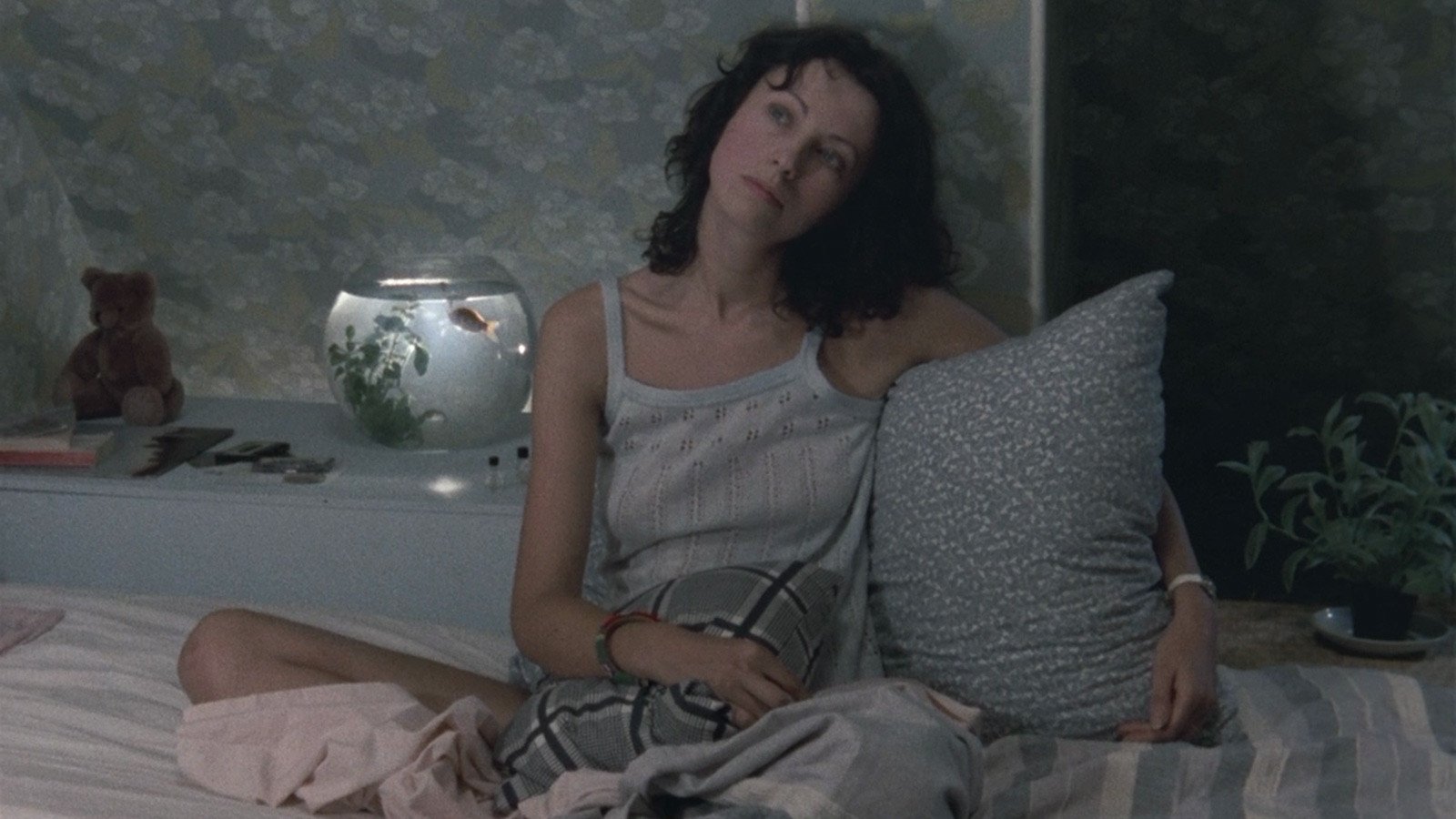 When I learned of Éric Rohmer’s death this past January, I didn’t feel sadness so much as soft, lingering melancholy, like the characters in his films do when they lose their new loves. I’d pegged the oldest of the French New Wave directors as a fuddy-duddy, the man who insisted on staying behind to edit Cahiers du Cinéma once the boys had left for the world. He was 47 years old when he directed his first feature film, 1967’s La Collectionneuse—almost a decade older than his peers, and unfurling on screens nearly a decade after their films had boldly proclaimed themselves. Rohmer’s were quieter. Unlike Jean-Luc Godard, François Truffaut, Jacques Rivette, and Claude Chabrol, who changed styles like hats in the name of reinventing cinema, Rohmer’s approach stayed relatively constant: a sun-dappled medium or long shot, a man and a woman toying with each other in the frame.

I’ve since realized that my rejecting Rohmer was an attempt to seize maturity; as Andrew Sarris has written, though, nostalgia can be a more mature approach than cynicism. Rohmer’s movies take on a nostalgic mood because their present-day liaisons are often dangerous; one of the two biggest misconceptions cinephiles hold about Rohmer (myself once included) is that his movies are all fun and games. Rohmer labeled his first six films as “moral tales,” all stories of men tempted to stray outside monogamy. They’re more than nutty neurosis: As Phillip Lopate has perceptively argued, Rohmer rarely lets his characters off easy. The men in particular radiate as pricks.

The other major misconception that viewers hold is that Rohmer’s films are all alike. Rohmer pulls off emotionally loaded material with camera movement, cutting, and line deliveries that at times feel like the pinnacle of rhythmic steadiness, so that characters even negotiate what to order for lunch at a believably haggling speed (Pauline Kael, with customary crankiness, wrote that Rohmer directed to a metronome). That said, the emotion changes drastically from movie to movie. The terrifying smugness of the hero’s smile at the end of 1971’s Claire’s Knee, triumphing at his conquest of a jeune fille, differs drastically from the hero’s forced peeled-orange grin at the end of 1969’s My Night at Maud’s, trying to convince anyone who’ll look at him that he’s chosen the right wife. These looks in turn differ from the relieved, open faces the reunited lovers throw at each other at the end of 1992’s A Tale of Winter, the first film in Rohmer’s “Four Seasons” series, which clashes with the knowing smirks the older women share in Autumn Tale, the last entry—suggesting that, yes indeed, love can wait. One could say that though the movement in Rohmer movies generally holds steady, its direction and intent changes from film to film.

In this sense, 1981’s The Aviator’s Wife is valuable for being perhaps the most stifled movie that Rohmer ever made, by which I mean the one where characters’ eyes meet the least. As in other Rohmer films, the artist privileges the two-shot, but that doesn’t mean the two people are engaging each other. Either one of the would-be lovers is looking down or up, avoiding the other person’s eyes, or else looking at another couple, jealously and longingly, off screen.

The Aviator’s Wife is a movie about people on screen worrying about off-screen characters; its title character, for instance, never speaks a single line. I don’t want to give away too much more than that, since the pleasure of the thing lies in its twists and turns and curlicues, in the way that the movie leads you to believe characters are two-timing, then three-timing each other, then makes you wonder whether anyone has been betrayed at all. I wouldn’t call it a mystery in the conventional sense (even though the 20-year-old protagonist frequently walks down city streets alone, like a noir hero, and the 22-year-old lead actor, who died a few months after the film’s release, is named Philippe Marlaud). What works so well about it—this is all I’ll say for plot—is that, though the movie is structured as a series of long scenes between amoreuses, at the end of each you’re still not certain of how they feel about each other, or whether they’ll see each other again. By the end of the last shot, like in Children of Paradise, the possibility emerges that they’ll just each recede separately, into a crowd.

Rohmer made the movie at a transitional moment. He’d finished the “Moral Tales” and two historical epics; his prior film had been Perceval, a medieval musical. The Aviator’s Wife was the start of a new series called “Comedies and Proverbs,” each film based on a saying. In this case the proverb is, “It is impossible to think about nothing.” While in the “Moral Tales” Rohmer had made movies about men obsessing over women, in Aviator’s Wife he broadens the scope to show women obsessing over men. (This paves the way for later films like Summer, told entirely from a female character’s point of view.) His heroine (Rohmer regular Marie Rivière) pines for the titular aviator for much of the movie before his hero arrives pining for her. I wouldn’t dare call the film deeper than a single-POV drama like My Night at Maud’s, a masterful exploration of an individual’s wriggling choice, but it does seem to me to be rounder; by shifting his perspectives, Rohmer gets to deal more with the process of how a couple’s members choose or don’t choose each other. “I’ll be back, but I won’t be seeing you,” one character tells another. “Even if I could, neither of us would want it.” It’s a testament to the movie that I don’t know if he’s right.

Though not quite in danger of leaving audiences comme ça, the New Wave filmmakers are at a transitional moment now themselves. A mini-theme that emerged at this year’s Film Comment Selects was a state of the Vague: Godard shorts and trailers, culminating in his most recent shorts masquerading as trailers; Luc Moullet’s playful new essay film, Land of Madness; and the one-film Rohmer tribute. It’s amazing to consider that, aside from two early deaths—François Truffaut’s and Jacques Demy’s—the New Wavers have been making movies well into their 80s. But Agnès Varda has announced that last year’s The Beaches of Agnès will be her last film, and rumor has it that Godard and Rivette are at career’s end themselves. Yet I don’t believe, as some alarmists do, that cinema will die with them. If anything, cinema’s more vibrant than ever, and we’ve partly the French New Wave to thank.

Alain Resnais popularized shifting time schemes, Godard the jump cut. Rohmer filmed long conversations like Dreyer did in Gertrud, but loosened them and shook them up. Godard was right: Now, more than ever, cinema has multiple histories, and multiple storylines. (This festival alone has proved world cinema’s variety, with entries from Russia, Romania, China, and indeed France.) For the rats of the Cinématheque, it was Chaplin one night, John Ford the next; for me it’s Frederick Wiseman, Pedro Costa, Frank Borzage, and Apichatphong Weerasethakul.

Yet every work gets its ideas from somewhere, and it’s safe to say the sit-and-talk films of artists like Richard Linklater, Hong Sang-soon, and Andrew Bujalski wouldn’t exist without Rohmer. Rather than decry derivatives, we should be grateful for new work. I see The Aviator’s Wife, then I watch Beeswax, with its bright, witty twentysomethings trapped in an even more ambiguous ending. I see afternoon Paris becoming lunchtime Austin and, in the process, I catch history being formed.