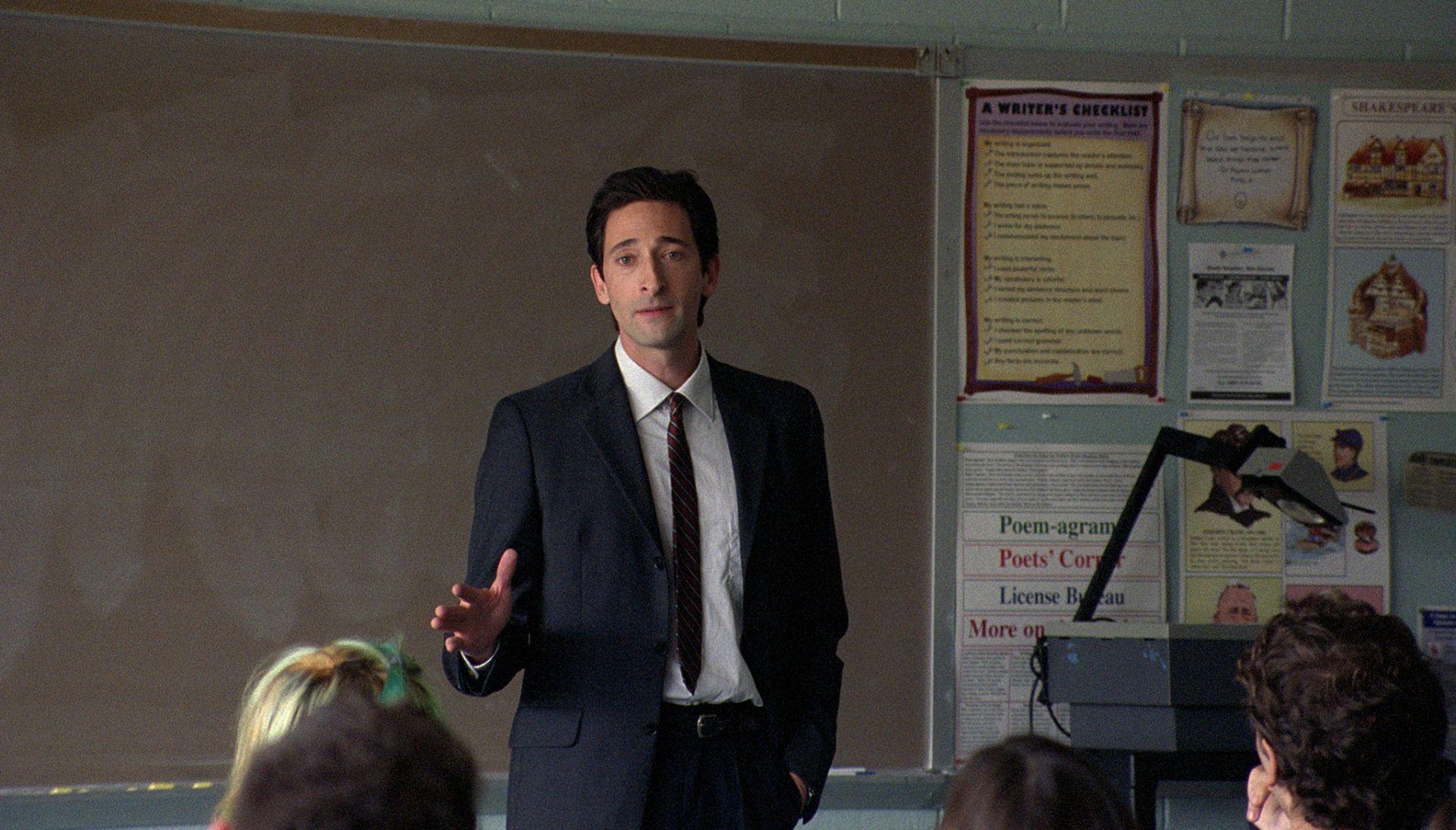 Auditing a variety of approaches to the urban high school social drama before settling on risible bathos, Detachment is enigmatically billed as a “Tony Kaye talkie,” but the director’s trademark shrillness renders its dialogue in all-caps hysteria. Conversation is neglected in favor of speechifying, as substitute teacher Henry Barthes (Adrien Brody, trying to make lines like “The ‘s’ is silent” carry metaphoric illumination) brings a Zen-like affect to his latest assignment at an outer-borough New York City institution where his duty is implicitly understood to prevent mayhem rather than educate. After Henry faces down a truculent delinquent who tosses Teach’s satchel at the door by intoning, “That bag has no feelings,” Kaye, teacher turned screenwriter Carl Lund, and Brody pelt us with everything from the actor’s interstitial, unshaven improvisations (reciting Bob Dylan’s “My Back Pages”) to innumerable numbing meltdowns by the school’s burned-out staff (James Caan, Lucy Liu, Blythe Danner, lame-duck principal Marcia Gay Harden) and scenes, striving to be transgressive, of black parents screaming “bitch” at Liu and at Henry’s shellshocked colleague and potential love interest (Christina Hendricks).

Aside from stabs at comic relief via Caan’s gruff counselor—he riffs on a malcontent’s threat to “fuck your shit up tight” in a lame resurrection of the old-white-man-talks-gangsta gag—and an anvil-heavy sequence condemning No Child Left Behind and funding dictated solely by state test scores, Kaye whizzes past American History X, his big-screen Afterschool Special on neo-Nazism, in setting standards of humorless, sensational shamelessness. And it’s not the damage to youth caused by bad education policy that Kaye and Lund put front and center, but the Secret Past Hurt carried by Brody’s sad-eyed martyr (an easily guessed hot-button issue), and the twinned, chaste relationships he develops with a wounded, artistic student outcast (Kaye’s daughter Betty, raw and valiant under the circumstances) and a homeless, pixieish teen prostitute (Sami Gayle) to whom he opens his spartan Brooklyn apartment. Even more absurdly than the Ryan Gosling junkie-teacher vehicle Half Nelson, Detachment is all about the cute teacher’s crises and his babbling about “this sea of pain we’re all in,” and even before its jaw-dropping tragic climax at the worst cupcake sale ever.