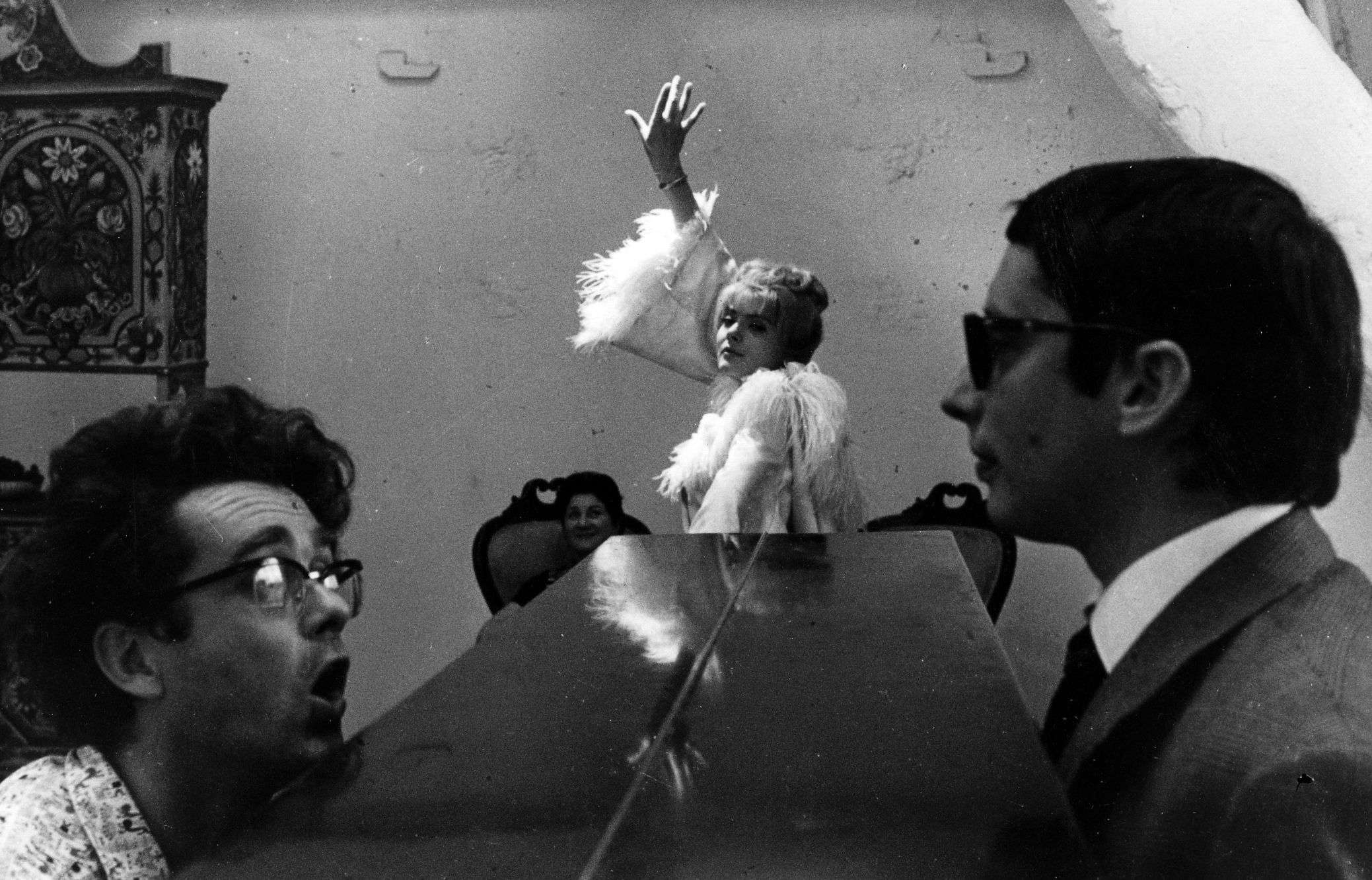 The beret brigade of French New Wave film directors may have been socially progressive and intellectually inclusive, but when it came to gender lines, Jean-Luc Godard and François Truffaut were decidedly less interested in channeling Dorothy Arzner, Ida Lupino, or any other esteemed female Hollywood directors than they were in paying tribute, in both their Cahiers du Cinéma criticism and film pastiches, to the hyper-masculinity of Howard Hawks and John Ford. For whatever radical advances they were responsible for (and, make no mistake, they’re countless), the ditch-diggers of the Nouvelle Vague were still responsible for crafting prototypal movies for guys who like movies. (Wasn’t Anna Karina more Audrey than Katherine anyway?) By most accounts, photographer turned director Agnès Varda is considered the archetypal girl who crashed the big boys’ clubhouse, and Cléo from 5 to 7 was the film that paid her membership fee.

Cléo (Corinne Marchand), a Parisian pop singer with three minor hit singles to her name, begs a wild-haired psychic to tell her something good about her future. The soothsayer’s first deal of the cards is a lackluster one, and the only finite detail she can relate is that a dark stranger will enter Cléo’s life sometime in the near future. She eventually draws the death card—which may imply an impending personal upheaval, she assures Cléo—and then the tower, indicating what could be a violent expulsion of false beliefs and assumptions. Now frightened out of her wits and presumably interested in her lifeline, Cléo asks to have her palm read. The woman hesitates and then refuses. After an unsatisfied Cléo leaves, the customers outside glaring at her as if she’s messed with their auras, the fortuneteller confides to her roommate that Cléo is doomed. Indeed, as the film unspools in real-time conveyor-belt fashion, Cléo from 5:00 to 7:00 awaits the results of a biopsy that will determine whether or not her cancerous stomach tumor is inoperable.

Despite the dire premonitions that point to the titular heroine’s grueling psychological marathon, Cléo from 5 to 7 moves with grace from one emotional extreme to the next. Whenever she finds herself drifting too far into melancholic self-pity, she blithely puts on a devil-may-care grin—most stunningly in the penultimate scene in the park when she sashays Marilyn Monroe-style down stairs in the Parc Montsouris in order to face her impending diagnosis. And when she reaches the cusp of true giddiness, she quickly reverts back to superstitious pessimism. Varda’s protagonist truly embodies a pop star’s theatrical flair, as she seemingly passes time by going through emotions for only as long as she senses her friends (her captive audience) are willing to pay attention.

All throughout, Varda captures the fairy-tale essence of early-‘60s Paris with a vivacity and richness that rivals Godard’s Breathless. Unlike her New Wave compatriots, whose talents were reared in part at film schools, Varda was trained in the field of photography and consequently films the city with a completely unique vision. Her framing teems with life at every corner: kittens wrestling in Cléo’s apartment, a child playing a tiny piano in an alleyway, and quarrelling lovers in a café. She demonstrates an unerring eye for complex compositions that still manage to delineate between foreground and background planes. And in the bargain, every one of the film’s gorgeously designed set pieces enhance our understanding of the character and amplify Cléo’s understanding of herself.

There’s a heightened urban suavity to an early scene inside a trendy hat shop that tips its, well, hat to Citizen Kane. Varda allows a group of mirrors to reflect images off each other until Cléo appears to be shopping in a giant kaleidoscope—a prelude of sorts to the geometric fantasias of Tati’s Playtime. In multiplying Cléo, the mirrors predict the wide variety of emotional masks she will wear and learning experiences she will go through during her two-hour wait. As the tower card from the tarot predicted, some of Cleo’s inner discoveries are potentially shattering, as when grotesque street performers call to Cléo’s attention the vulgarities of artistic performance. The film’s camerawork is so ravishing that some of Varda’s isolated shots have more to say than some of the more famous New Wave montage effects (though Varda does use the jump cut during a few choice moments).

The push-pull effect of Cléo’s good looks alternately builds and destroys her credibility as a feeling, free-thinking woman, a force set into motion as she walks away from the fortuneteller’s parlor and exclaims in an inner monologue that she will always consider herself healthy as long as her looks are intact. In fact, a clever Varda uses to her advantage the notion that the audience is likely to ignore or reason away Cléo’s extremely superstitious persona when, in general, most of her superstitious beliefs are physically validated. This cavalier approach to understanding Cléo as a person places the burden of her dilemma—not being taken seriously as an assembly of beliefs, attitudes, and behaviors—square in the laps of the audience. (If we can’t take Cléo at face value, why should we expect any of the films’ characters to?) Without admonishing, Varda manages to let the audience in on how frustrating it can be for characters like Bob (Michel Legrand, the film’s musical composer) and Angèle (Dominique Davray), who largely fuels Cléo’s obsession with superstitious beliefs, to deal with someone as high-maintenance as the singer. And only then does she plunge the audience headlong into the oft-terrifying world of being constantly watched. Varda evokes this paranoia through a celebrated montage of first-person shots from Cléo’s point of view as she walks down the street.

One of the most provocative aspects of Cléo from 5 to 7, at least for modern audiences accustomed to more prickly feminist statements (Baise-moi and the works of Catherine Breillat come immediately to mind), are the unresolved hints of feminism that are sometimes countered with anachronistically traditional gender politics. Hardcore feminists are likely to be alienated by the final chapter, in which Varda seems to be making the case that a reliable guy (here, Antoine) is really all Cléo needs to make right in her world. The ending is actually much trickier than that, but it’s certainly food for thought that the Legrand songs that Cléo earlier derided as misguided attempts to mold her persona also happen to underscore her emotional epiphanies in the park.

Finally, what does one make of the fact that this real-time film, which purports to detail two vivacious and harrowing hours in the life of its title heroine, is actually 30 minutes short of said two hours? In reel time, Varda’s scenario is actually Cléo from 5 to 6:30. So what fills the last half-hour? There are a number of interpretations one could make, and all of them cast into doubt any notions that the conclusion is overly tidy (probably the most frequently leveled charge against the film). One is that the film comes to an abrupt and unadorned halt following the revelation that Cléo’s condition is not life threatening, suggesting that she lives life from crisis to crisis. As Bob and Angèle allude to earlier, Cléo is a non-entity when she’s not making a scene. When the film’s impetus is removed, Cléo simply ceases to be, cinematically speaking.

Another interpretation, and one that stems from that idea, is that the missing minutes following Dr. Valineau’s diagnosis are left unrepresented as a comment on the inevitable change in Cléo and Antoine’s budding relationship. Cléo has just made a connection with someone outside her circle of comfort and shared a moment of total emotional candor. But that moment still seems to depend on Cléo’s nigh-pathological dependency on the concern of strangers. When that concern dissipates, then it’s Cléo’s turn to step into the role of compassionate caretaker. The uncomfortable silence that precedes the terse “fin” end title seems to suggest that Cléo still isn’t ready to interact with paramours at that level. This interpretation challenges the belief that Cléo from 5 to 7 is either a consciousness-raising feminist primer or a socio-sexual retrograde by eliding easy categorization into either (detractors would say “disappointing”) bin.

In the four decades since Cléo from 5 to 7, Varda has directed many films, and created at least three other esteemed masterpieces: 1977’s One Sings, the Other Doesn’t, which is the overtly feminist message movie Cléo from 5 to 7 is often given credit for being; 1985’s Vagabond, one of the key art-house films of the ‘80s; and recently, 2000’s The Gleaners and I, a widely lauded essay film somewhat in the style of Chris Marker. In a way, Marker was probably always the Nouvelle Vague/“Left Bank” filmmaker that Varda perhaps most strongly resembled, in their shared love for the power of photography, their completely unforced attitudes toward interpretation, and a warm sense of cinematic playfulness. One can’t help but compare Marker and Varda to the curious and rambunctious kittens, a significantly entrenched motif in Marker’s canon, in Cléo’s apartment. Those kittens would grow older and direct the world-wise A Grin Without a Cat and The Gleaners and I, but Cléo from 5 to 7 serves as a reminder that even the most cunning, ruthlessly intellectual filmmakers can also create wondrous playgrounds, so long as they’re in touch with their own giddy paradoxes.