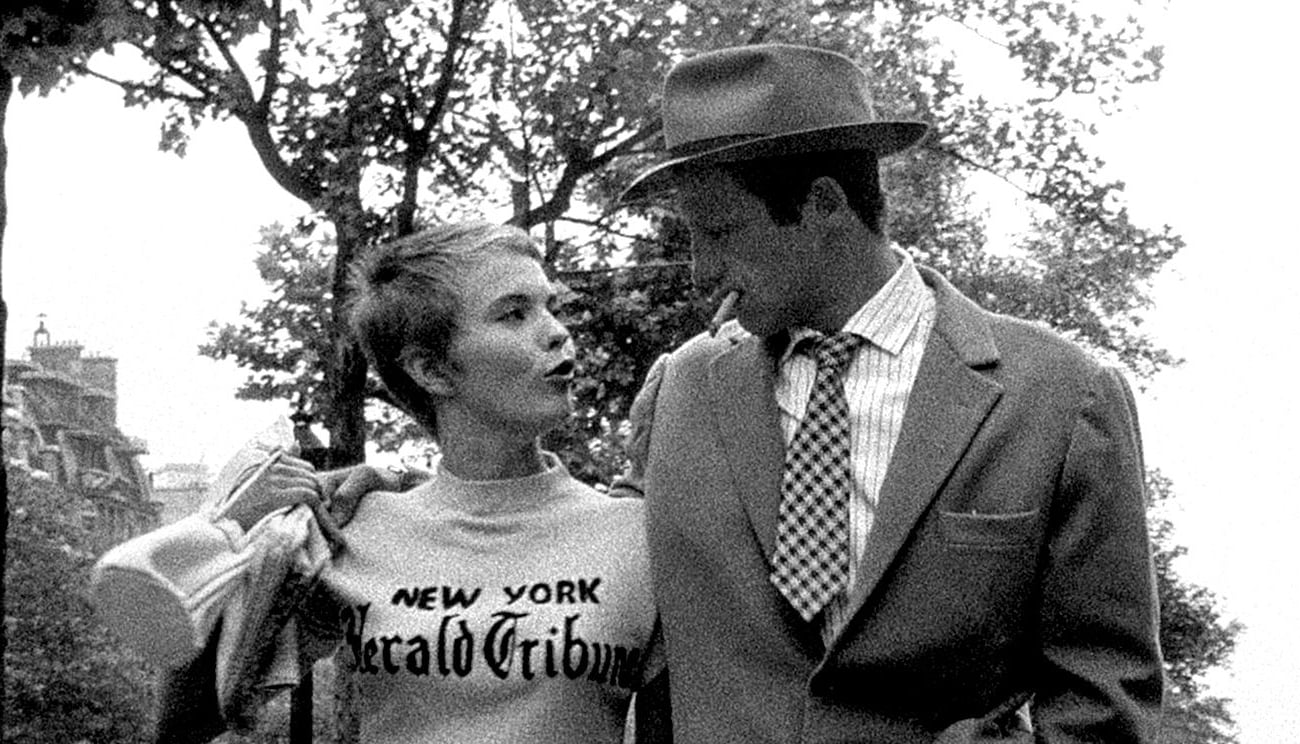 It’s not surprising that Breathless remains fresh some 50 years after its Paris premiere in March 1960—if by “fresh” we mean somehow still in sync with contemporary cultural trends and mores. With its too-cool-for-school bevy of film and literary references, Jean-Luc Godard’s masterpiece both foresaw and helped to launch the now-dominant notion of pop-culture obsession as badge of honor. We may smile at Jean-Paul Belmondo’s rapt idolization of Bogart, for instance, but it’s more knowing grin than disconnected smirk. Then there’s the ooh-la-la chic of Raoul Cotard’s black-and-white cinematography; the simmering yet self-aware dance of seduction enacted with such arch grace by Belmondo and Jean Seberg; the casual fatalism that never seems to go out of style, especially when spoken in French and accompanied by swirls of cigarette smoke. As a source of modish pleasure, Breathless retains its appeal to a remarkable degree. You still want to be Jean-Paul Belmondo, or sleep with him, or both. You still want Jean Seberg’s New York Herald Tribune T-shirt.

It wasn’t until I sat down and re-watched Breathless—in a beautifully restored new 35mm print—that I remembered that its sleek surface charms, while hardly insubstantial, don’t really account for why we keep watching it so many decades later. Rather, what remains most striking, and most moving, about Breathless is its sophisticated yet largely guileless faith in the filmic medium, a cinephilia untainted by smugness or cynicism. Of course, such affection did not stop Godard from throwing out a slew of established filmmaking rules, from the continuity editing system to the notion that a film had to be inhabited by psychologically-consistent “characters” acting out a linear, cause-and-effect “plot.” But watching Breathless, one never gets the sense that Godard breaks these conventions out of anger or disgust—at least not yet. It comes from a place of jittery excitement and possibility, the double vision of appreciating so deeply the riches of cinema’s past and seeing so vividly what shape its future could take.

Don’t get me wrong: Godard remains as cool a customer as you remember. But even the sleekest of scenes can carry unexpected depth charges. Take the famous press conference set piece, where Seberg’s Patricia Franchini has been sent on assignment to interview famed author Parvulesco (the revered French director Jean-Pierre Melville). As reporters pepper the unflappable writer with queries on the nature of love and intimacy in contemporary society, Patricia keeps trying to get a word in edgewise, finally speaking up loudly enough to ask Parvulesco about his “greatest ambition.” After a pause, Parvulesco—what a great name, with all the vaguely European menace of a Sydney Greenstreet underworld kingpin—removes his sunglasses and answers famously, “To become immortal, and then die.” It’s a great line: gnomic and terse, emblematic of the film’s love of tough-guy nihilism.

But what follows is even more interesting. Godard cuts back to a close-up of Seberg, who removes her own sunglasses and looks away puzzled. Martial Solal’s infectious score punctuates the shot, which lingers just long enough as Seberg slowly turns toward the camera in a look of meditative uncertainty. The scene ends with a delicious slow dissolve, her visage lingering in the frame as she gazes out enigmatically at the viewer like a grad student Mona Lisa. The point is not really to contemplate Parvulesco’s words along with Patricia, or even to really consider what Patricia thinks and feels about it herself. It’s about film’s ability to shape a stray moment seemingly devoid of content into an ambivalent and searching experience: how the close-up pulls us in and pushes us away simultaneously; how the dissolve makes us long for just one more second of contemplation. There’s hardly a moldier cliché in the movie lover’s handbook than to claim that a film is “about film itself,” but in moments like this, Godard foregrounds the medium without succumbing to empty flourish. He doesn’t weld style and substance so much as insist that style itself is a kind of substance, one that is suggestive and complex in its own right.

Certainly, this spirit animates Belmondo and Seberg’s performances. The actors don’t inhabit characters so much as occupy a middle ground where play-acting and fan ardor replace the embodiment of set emotions and personality traits. Patricia and Belmondo’s Michel Poiccard both do some pretty questionable things throughout Breathless (he steals a car and shoots a cop; she turns him in for personal expediency), but as Geoffrey O’Brien pointed out in a recent Film Comment essay, we don’t really think of these actions as revealing or even important to who Michel and Patricia really are. They are the acts of the hard-boiled loners and femme fatales from which Michel and Patricia—and, most importantly, Godard—find their animating spirit, and to recreate their world of violence and betrayal is more a matter of aesthetic fidelity than moral query. What’s remarkable is how compelling their performances end up being, grounded not in psychological complexity, but an appreciation for the complicated pleasures of inhabiting a fantasy cine-world. Watching that great extended duet between Belmondo and Seberg in Patricia’s apartment, it’s striking to what extent we come to know them and their relationship through the books they love, the gestures they appropriate, the music they dismiss and swoon over. I remember being so annoyed by this scene when I first viewed Breathless, because I falsely expected this to be a moment of traditional exploration between two characters. To babble on repeatedly about where to hang a poster seemed beyond irrelevant. But Godard knows that the repetitions, the asides, the quotes from Faulkner and Thomas, all form a language in their own right: a secret code of pop-culture references and digressions through which moments of genuine flirtatiousness and melancholy flicker through. Yet again, Godard’s skill is matched only by his prescience. It wasn’t until subsequent viewings that I not only grew to love the scene and its inhabitants, but made the now-obvious connection that this was not unlike how I and the people I know speak to one another today—just, you know, not as cool.

That Godard finally makes it out of that apartment and back onto the streets, though, proves crucial to why Breathless doesn’t asphyxiate in a cloud of cigarette smoke and self-absorption. The film may have cinema encoded in its DNA, but it is also very much a movie of the world, catching the glories of Paris on the fly via Godard and Cotard’s restless handheld camera. Watch the play of light and shadow as Belmondo and Seberg stroll from one side of a darkened building to another, or follow the syncopated rhythms of Godard’s jump cuts of Seberg’s profile as they drive through the city streets. These pleasures are, of course, uniquely tied to the cinematic apparatus that presents them. Still, it’s that most bounteous of movie gifts: moments that both gaze out into the world with wonder, and remind you that film’s ability to do so is wondrous as well.

Godard’s attitude toward the outside world would become more complicated and explicitly political as time went by, just as the formal means by which he engaged this world would become more knotty and abstruse. In some ways, then, Breathless represents a simpler moment in Godard’s oeuvre. It certainly feels less self-reflexively critical in its embrace of cinema’s older politics of gender and power. Many have cast an uneasy eye on Godard’s framing of women throughout his career, and Breathless certainly carries with it the uneasy hint of unthinking misogyny. Godard recognizes how men objectify Patricia, but his camera does a certain amount of objectifying itself, as does a screenplay that ultimately paints her as a calculating backstabber. And yet, one must make room for her funny-sad ruminations in her apartment, and the way she feels so much like an equal to Belmondo as they cajole and annoy and eventually fall into bed with one another. There’s no pat way of characterizing the film’s attitude, particularly when Godard is drawing so explicitly from American genre movies that, let’s face it, had their own issues with the fairer sex.

In this way, Breathless feels very rooted in a specific time and place within the career of its creator, as he attempted to reconcile convergent and sometimes conflicting passions: old movies and new politics—the satisfying richness of classic Hollywood and the exuberant volatility of the French New Wave. We now know that he would figure it out splendidly—except when he wouldn’t. But in March 1960, everything was up for grabs save for the love and understanding of the medium that infuses every frame of Breathless. Such a blast of high-wire artistry can justifiably be deemed “fresh” by today’s standards. Watching it, however, you cannot help but reach for another overused yet occasionally perfect descriptor: timeless.