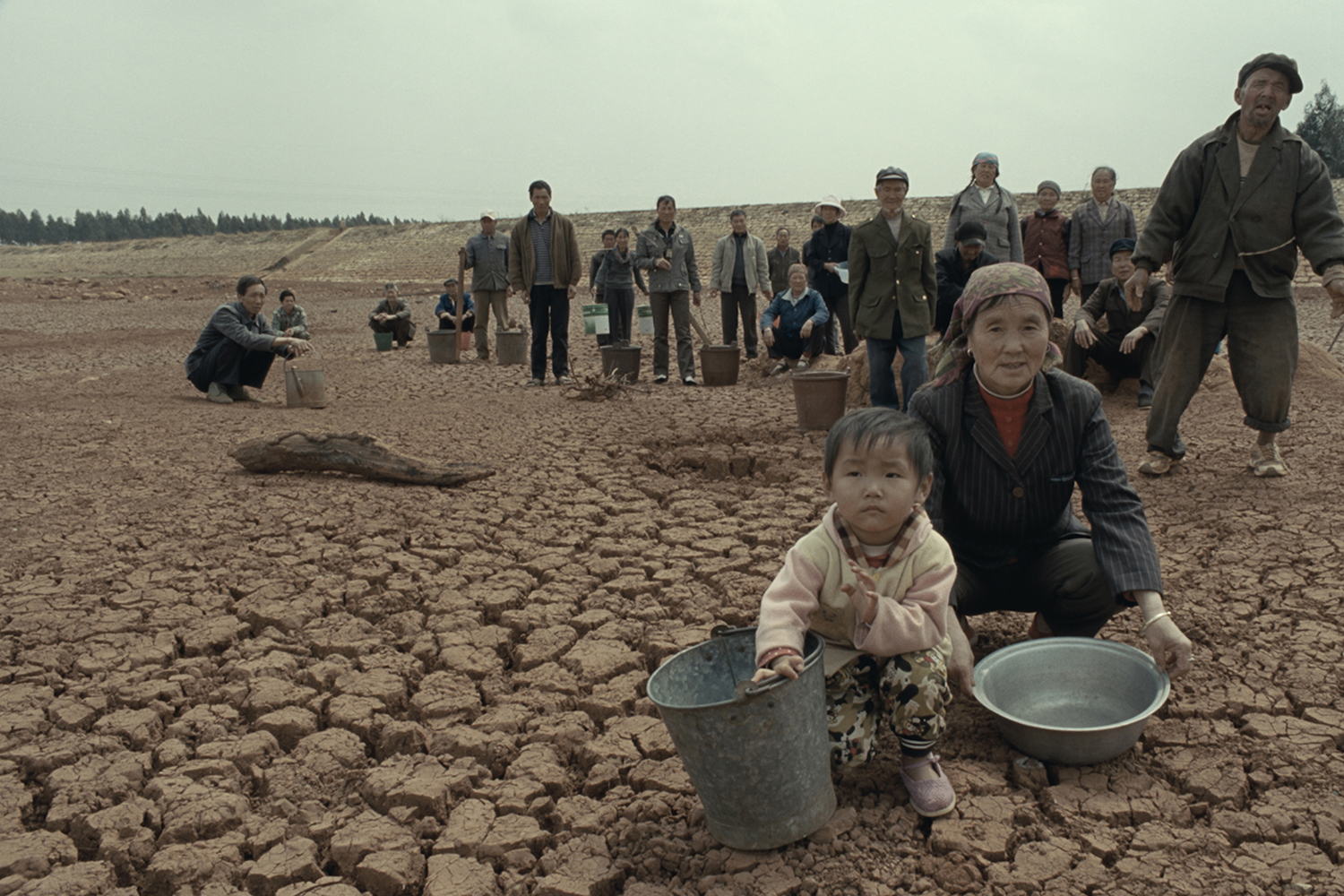 As a recording apparatus, the camera no longer disturbs or announces its presence. It’s a ghost in the room, as banal as a limb. Xiaoshuai Wang restores the exceptional status of that most revolutionary of technical devices in Chinese Portrait, a series of short-lived tableaux vivants for which the gravitational pull of the camera is re-staged.

The simplicity of bodies barely moving before a camera that brings their quotidian temporality into a halt is nothing short of a radical proposition in our digital era—in the context of a culture obsessed with using cameras precisely as anti-contemplation devices, and a film industry still so invested in producing artificial drama in order to tell its stories. In Chinese Portrait, there’s no need for storylines, tragedy, or spectacle for drama to emerge. The drama is in the minutia of the mise-en-scène, in the gap between bystanders who return the camera’s gaze and those who don’t. The drama is in the camera’s de-escalating force, its ability to refuse the endless excitation it could provide in favor of one little thing: elderly people stretching in a park, black and brown horses in a field, two of them licking each other’s backs. This is the camera not as a Pandora’s box, but as a sharp laser beam with curatorial intentions.

The drama here is also in Chinese Portrait’s very concept, which is similar to that of Abbas Kiarostami’s 24 Frames, where motion is born out of prolonged stillness, and to that of Susana de Sousa Dias’s works on the effects of Portuguese dictatorship, Obscure Light and 48, where stillness is all there is, photographs namely, and yet so much moves. Wang’s film also bears a kinship with Agnès Varda’s later work, where a human being is made singular in a fast-moving world by standing still and recognizing the device that records them. Both Varda and Wang seem to see sacrilege in taking the camera for granted. A couple of tableaux in Chinese Portrait derail the notion of the individual embossed from their habitat by the camera’s insistent gaze, as in a group of men kneeling down to pray, their backs to the audience, and a later segment of a crowd standing entirely motionless in the middle of an abandoned construction site, sporting scarves and winter jackets, staring at the camera in unison.

Something remains quite alive and oddly “natural” within the documentary’s portraits as Wang’s mostly still subjects inhabit the gap between staging and posing by appearing disaffected. Or perhaps they’re stunned by modernity’s deadlock. Everyone seems perpetually in transit yet perpetually stuck. Wang’s fleeting portraits feature Chinese folk confronting the lens in their everyday environments, but not all of them react to the camera’s might in the same way. Some stand still and stare while others look away, but they’re all largely aware of the recording device singling them out as muses of the landscape.

The portraits offer evidence of differing temporalities in this numbingly fast world, too convinced of its universal globalism. Evidence of conflicting temporalities within worlds, too, as some subjects in the same frame bother to stop and others go on about their lives. In a provincial alleyway, various men sit on stoops from foreground to background. Some stare into the horizon—that is, a cemented wall, the film’s most recurring motif. Others refuse to allow the viewers to be the only ones looking. Several bathers on a sandy beach stare at the off-camera ocean, except for one man wearing a large fanny pack, certainly staring at us behind his shades. At a construction site, an excavator digs while another worker sits on a slab of concrete, gawking at us as we gawk at them. A man rests his hands on his hoe to look at the camera with a half-smile, like someone from the 1980s, who may approach the cameraperson to ask what channel this is for and when he can expect to be on television.

Through the sheer power of blocking, the methodical positioning of elements in the frame, Wang reaches back to a time when there was an interval, a space for waiting and wondering, between an image being taken and an image being seen. Another temporality, indeed, captured by cameras, not telephones. That was back when sharpie scribbles would don the tail end of film reels, which are kept in the frame here by Wang, as one portrait transitions into the next. The filmmaker’s urgent reminder seems to be that it’s not all just one continual flow. Time can actually stop, and we can choose to look or to look away.

Review: Jumanji: The Next Level Finds a Series Stuck in Repeat Mode

Review: Bombshell Is a Series of Quirks in Search of Trenchant Criticism