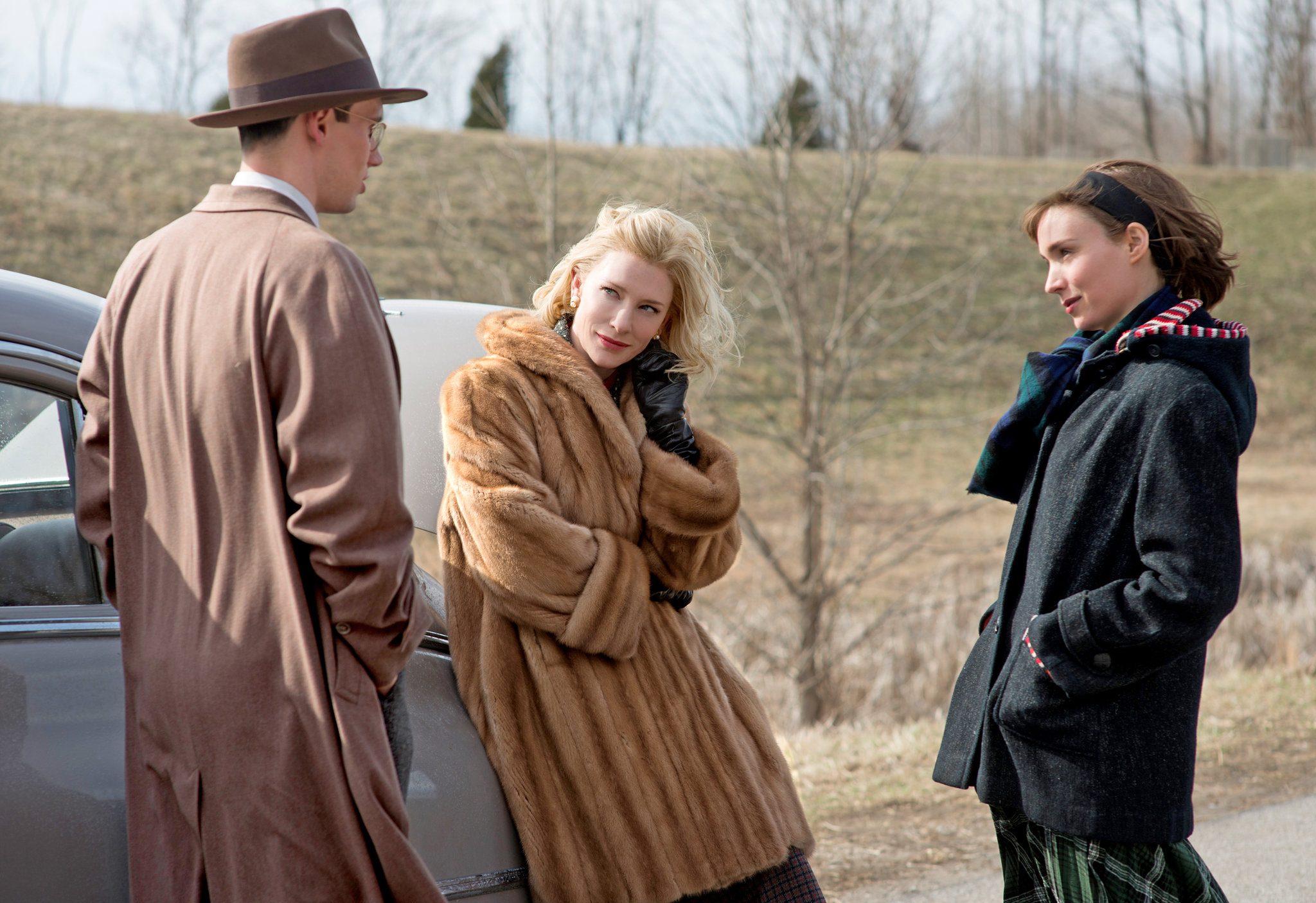 Adapted by Phyllis Nagy from Patricia Highsmith’s The Price of Salt, Carol is a continuation and refinement of Todd Haynes’s signature concerns, slotting into his filmography like a wintry, understated cousin to Far from Heaven. While the normative forces of society once again threaten a burgeoning love affair, this time around it’s the wistful glances, passing touches, and wordless complicity of love itself that take center stage.

It’s Christmas 1952 and Therese Belivet (Rooney Mara), a smart, unassuming wannabe photographer, is making ends meet by working at an upmarket department store. One customer cannot help but catch her eye: the older, married Carol Aird (Cate Blanchett), who follows her sales suggestions without hesistation and just happens to leave her gloves on the counter as she walks off. The return of the items ushers in a lunch, which in turn ushers in drinks at Aird’s country house, with Carol’s angry, soon-to-be ex-husband, Harge (Kyle Chandler), the only real fly in the ointment. The growing attraction between Carol and Therese is never verbalized, but rather emerges with organic grace in gazes and gestures. The most ravishing example of this comes when Carol drives Therese to her estate for the first time, Therese’s eye wandering across the landscape of Carol’s face as the car enters a tunnel, its gleaming lights illuminating and obscuring Blanchett’s smile in equal measure, before one immaculately gloved finger presses the necessary button and the strings on the soundtrack merge with the song that now starts up on the car radio.

While Haynes may periodically flirt with adding extra layers to the narrative, with jealousy, class difference, and violence all presenting themselves as potential complicating factors, Carol is only really about one thing, namely whether these two women will be able to find a workable framework for their desire. As befits this deliberately narrow focus, Haynes works with an equally concentrated set of formal ideas, constantly placing his characters behind glass, hemming them in within almost wall-to-wall medium shots, and cutting again and again to detail shots that zero in on the feelings betrayed by hands and fingers—all in all, an inobtrusively intelligent way of depicting a world where things must happen indirectly and where expansiveness is unseemly. Aside from this formal subtlety, the washed-out palette and unusually spartan production design also gently push Carol out of the orbit of the standard costume drama, as if an Edward Hopper painting had been stripped of unnecessary furnishings and allowed to yellow.

With such an unadorned plot and an emphasis on the indirect and unspoken, the task of carrying the film was always going to fall to the actors. Both Blanchett and Mara generate a whole universe of feeling and tension with even the tiniest of facial tics or eye movements, two perfectly expressive faces so well matched that, in one early date scene between Carol and Therese, it’s as if they can’t help overlapping. The bond between the women is so captivating that as the film progresses and Harge begins to turn the screws, each fresh obstacle feels heart-wrenching precisely because it carries the prospect of their faces being parted. Perhaps Haynes’s most provocative idea is to withhold the close-ups that might otherwise satiate our desire for these two entwined visages, each guarded medium shot thus requiring all the more scrutiny from the viewer.

As Terence Davis can probably tell you, festival juries (or indeed selectors) aren’t always enamoured of delicate formalism and quiet subtlety, particularly in comparison to the more straightforward appeal of big statements and easy sentamentalism. But as a friend of Therese’s says as her cinephile buddies watch a film from the projection room of a theater, perhaps the best sort of cinema is about the gaps between what characters say and what they actually feel.

The Cannes Film Festival runs from May 13—24.