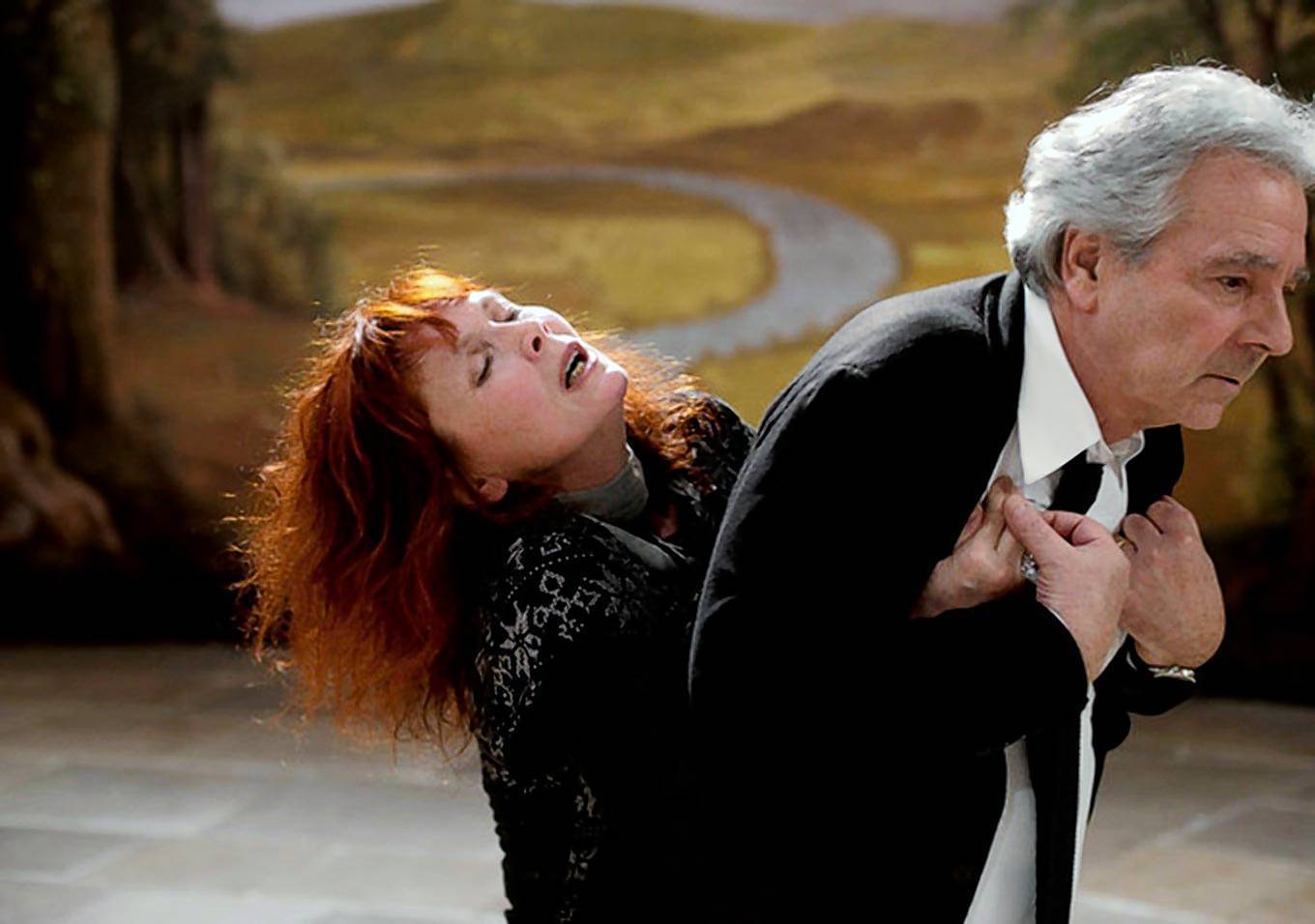 “Words must be spoken. We must say them all. And there are so many.” Within the storyline of You Ain’t Seen Nothin’ Yet, this sentiment refers to words of mourning, a eulogy spoken over lost love. (Indicating, at least in this regard, Alain Resnais’s latest and reportedly last film makes for strange bedfellows alongside Michael Haneke’s Amour.) Within the wider context of the film, these words might just as easily refer to the two Jean Anouilh plays on which it’s based. More intriguing to consider after the fact than it’s to actually sit through, You Ain’t Seen Nothin’ Yet is, at bottom, excessively wordy and a bit of a drag. Luckily, the film is enlivened somewhat by inventive mise-en- scène, as well as some lissome camerawork. The staging is so endlessly, even incestuously, self-referential as to earn the epithet mise-en-abyme, a term derived from what happens when you place two mirrors opposite each other, producing an infinite reflection, as in the famous hallway shot from Welles’s Citizen Kane.

You Ain’t Seen Nothin’ Yet opens in a playful enough mode, with mock-dramatic music and pieces of classical art superimposed over a dry ice-shrouded stage. The film introduces its repertory cast (a veritable who’s who of contemporary French cinema) by name as each receives identical phone calls reporting the death of legendary, entirely fictional, playwright Antoine d’Anthac. The great man’s dying request: assemble at his remote mountain chateau for the reading of his will, which further stipulates the viewing of some test footage for a new production of d’Anthac’s Eurydice. Actors in twos and threes arrive at the chateau, framed in identical shots, with identical gusts of wind blowing the same leaves around, set to the same mock-ominous musical cue. The screen that hides the movie screen reproduces the establishing shot of the chateau. The assembled actors watch the actors on film acting the play they’ve previously acted for d’Anthac. Over the course of the film, these repetitions becomes the play of difference and similitude, as three generations of actors assume various roles, playing to the on-screen troupe and each other, each rendition alike and yet not the same. In other words, to paraphrase Heraclitus, “You can’t step into the same role twice.”

For the first 15 minutes or so, you’re lulled into expecting another freewheeling cinematic lark like Wild Grass, which, whatever its other faults, never committed the capital sin of taking itself too seriously. You Ain’t Seen Nothin’ Yet, conversely, casts a funereal pall with its earnestly intentioned performance of Anouilh’s Eurydice. (If the audience isn’t subjected to the entire play, it sure enough feels like it.) The kind of affected, willfully artificial artwork that was all the rage back in the 1940s, Eurydice now just seems stilted and protracted, which doesn’t bode well for You Ain’t Seen Nothin’ Yet’s long-term vitality. Ultimately, it isn’t hard to see the appeal of this material for Resnais, especially since You Ain’t Seen Nothin’ Yet will stand as his curtain call. Near its own terminus, the film lays bare its raison d’être: The simulacrum of a stage death strengthens the bonds of solidarity among Antoine’s friends, in stark preparation for an all-too-real event. As the old folios used to put it: exeunt omnia.

Migrating Forms 2012: L’Impossible and May They Rest in Revolt