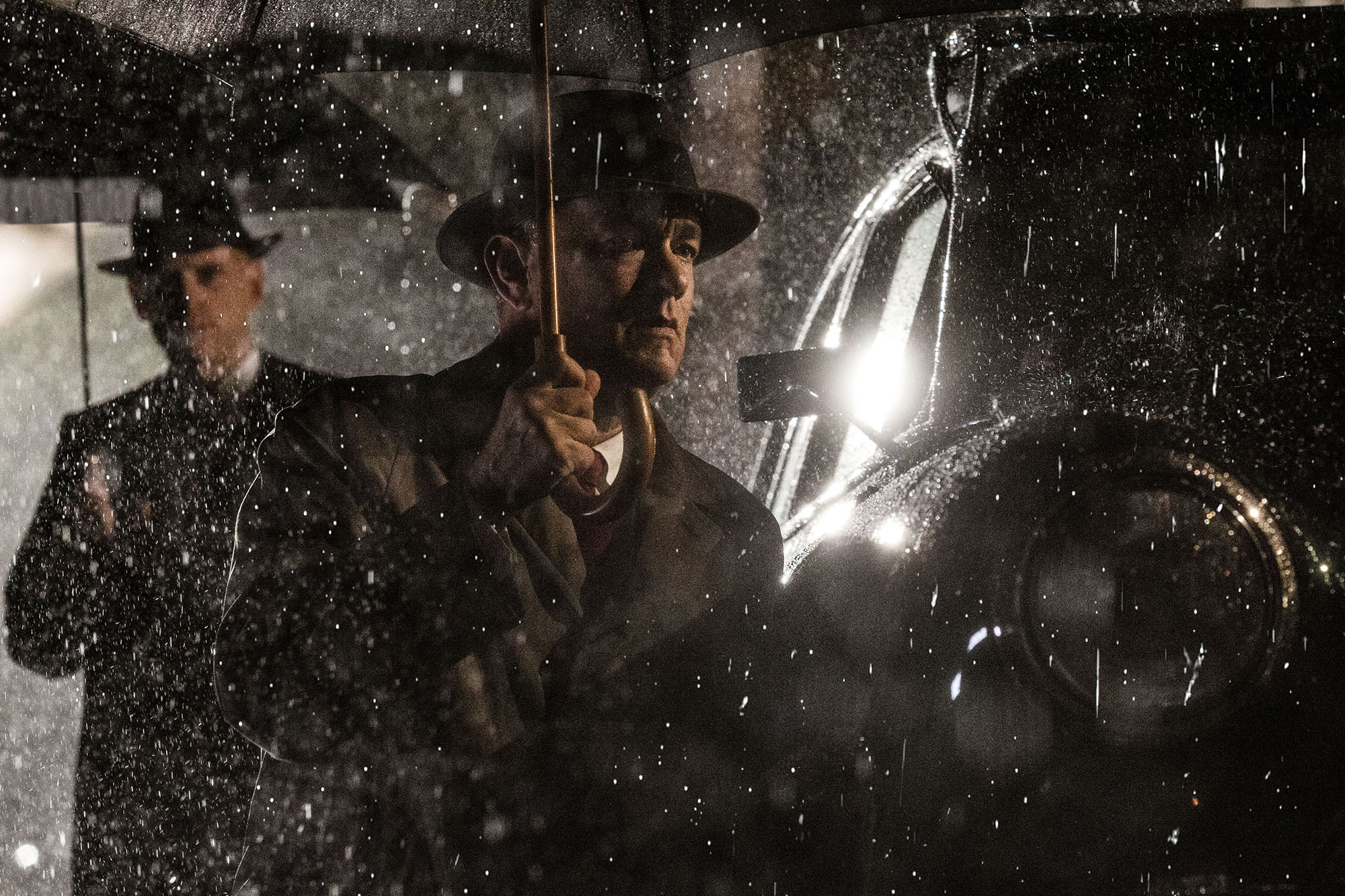 Spycraft and stoic self-reflection merge fitfully, but to great effect, in Bridge of Spies, Steven Spielberg’s taut Cold War thriller. In the film’s opening shot, Rudolf Abel (Mark Rylance) leans back into a mirror as he paints a picture of himself. Both the man and his representation are devoid of expression, framed in a dusty backdrop and only distinguished by shirts of different colors. After Abel silently takes a phone call, he emerges into a world where he has a persona imposed from without: as a foreign invader at the peak of the Cold War, a KGB spy living at the foot of the Brooklyn Bridge.

In the film’s masterful, nearly wordless opening reel, Bridge of Spies correlates Abel’s secretive lives with artistry. He lives in a building full of musicians, and twice he looks away from his easel to reveal the trinkets of double-agency: a stack of radio receivers and transmitters, and a hollowed-out nickel containing a secret microphotograph. His pursuers, meanwhile, are a mass of mid-century men in suits holding newspapers. Cinematographer Janusz Kaminski glides through and among the feds, tracking their trousers and trench coats, highlighting their anonymity and their mass. When they capture Abel at his home, he has the first notable words of the film (“Mind if I fetch my teeth?”), but he’s not interested in talking.

James Donovan (Tom Hanks), the lawyer assigned to defend Abel, talks for a living. He enters the film speaking in cocksure, screwball patter (the script was co-written by the Coen brothers), offering a master class in the deceitful defense of insurance companies. Donovan is given a primer of ethical dexterity, but he quickly becomes the ideological lodestar of Bridge of Spies. “Everyone deserves a defense. Everyone matters,” Donovan tells co-workers and family in order to justify his newfound status, as the unpopular advocate of a vilified criminal. In a series of jailhouse meetings, where a quietly commanding Rylance plays Abel with the serenity of Hannibal Lecter and the round, mundane countenance of Elmer Fudd, the duo acknowledge each other’s common humanity, even as Donovan faces the disdain and occasional wrath of the American vox populi.

Rife with Donovan’s plainspoken moral authority, Bridge of Spies is a good movie that suffers from a lack of anxiety about its convictions. Spielberg counters the false binaries and nuclear bogeymen of Cold War America with an argument built from equal parts liberal humanism and earnest pleas to Constitutional law. Only rarely does the director observe how queasily at odds our patriotism is with our humanity: A stunning series of cuts segues from an audience rising in a courtroom to a group of schoolchildren reciting the pledge of allegiance, and then watching an educational video about how to defend oneself in the event of a nuclear holocaust. The impact of this sequence is blunt, but stirring. Elsewhere, Donovan’s pleas to due process are broadly phrased to allude to contemporary matters of jurisprudence and war posturing, but these political allusions lack the fraught, pinpoint pungency of Spielberg’s work in Munich, which managed to explore the Israeli-Palestinian conflict and the aftermath of the collapse of the World Trade Center with an urgency that continues to astonish and unsettle.

Bridge of Spies gracefully pivots into the second half of its bifurcated narrative with a miniature story arc, about a group of air pilots recruited by the C.I.A. to fly a new U-2 spy plane high above the Soviet Union. When one of their planes is shot down, pilot Francis Gary Powers (Austin Stowell) refuses to follow orders that he end his life, and is captured by the Soviets. After Donovan’s commitment to Abel’s case ends, he’s sent to Eastern Germany as a non-governmental agent. He’ll negotiate for Powers’s release in exchange for Abel’s return to Soviet custody. This smooth transition, to what might otherwise feel like an entirely different movie, is a credit to Matt Charman and the Coens’ well-structured, if slightly on-the-nose, screenplay. The film cleverly positions Donovan to learn from Abel: Donovan’s art is negotiation, but Abel’s influence assists his spy work. When an American student detained in East Germany complicates Donovan’s mission, it doesn’t compromise his convictions.

The final half of Bridge of Spies features more than enough double-crossings and tense stand-offs to satisfy, but the film seems to run out of artistic and thematic gas once it crosses into enemy territory. Spielberg’s politico-humanistic concerns fail to deepen or expand in a frozen East Germany, captured in a disappointingly bleak and unimaginative grayscale. Thomas Newman’s score uses his trademark minor-key piano chords accompany the martial notes of John Williams’s recent work with Spielberg, and the flaccid mimicry is palpable. Worse, an underplaying Hanks never really defines Donovan as much more than a constitutional crusader or a family man. As such, his rather solitary struggles to reckon with a prisoner’s dilemma on both sides of the Berlin Wall never conjure any existential heft.

Instead, Donovan loses his jacket and sniffles, complaining of a cold. He looks like the Llewyn Davis of Alexanderplatz. What’s he searching for? With a Norman Rockwell family as the supporting cast of his unerring straight-man routine, the character comes to feel like a mushy amalgam of previous and distinct Spielbergian protagonists: equal parts Munich’s reluctant globetrotter, Schindler’s List’s reluctant savior, and Lincoln’s wary but warmly paternal warrior for righteousness. Likewise, Bridge of Spies has a streamlined efficiency, but it feels like the work of a master who wants to please rather than probe.