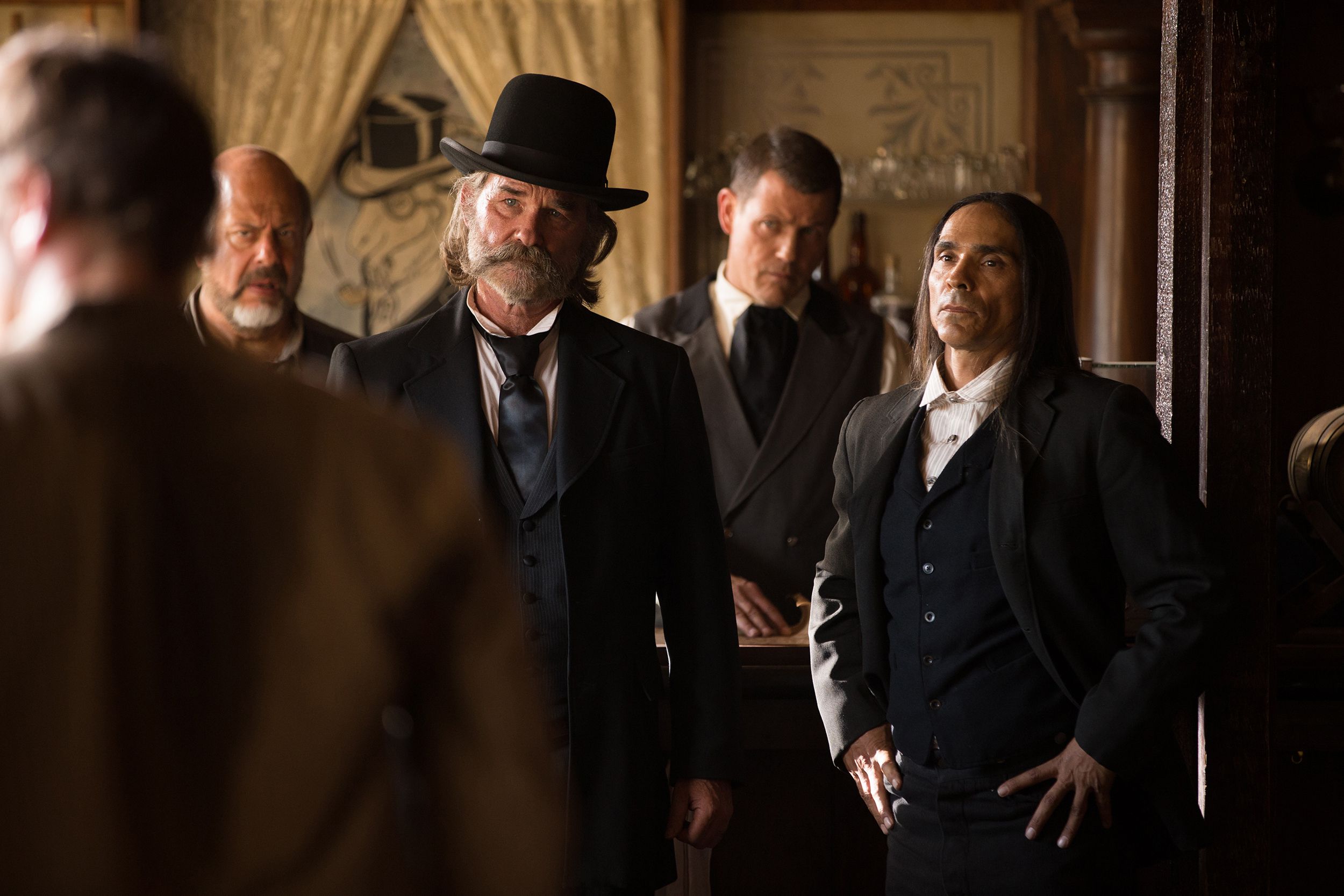 An early scene in Bone Tomahawk offers telling testament to the political tightrope on which writer-director S. Craig Zahler knowingly walks. The setting is somewhere in the American West in the 1800s, and a small town has been attacked by a tribe of warriors meant to embody European settlers’ most nightmarish fears of the Native Americans who understandably chafe at their invasion. Attempting to head the film’s inevitable charges of racism off at the pass, however, is a recognizably human American Indian character, The Professor (Zach McClarnon), who explains that the savages who attacked this town, who have a mystic burial ground several days’ ride away, who eat their victims, and who’re vividly shown bisecting an unfortunate deputy, are positively not the Native Americans whose near-annihilation we associate with the history of the formation of the United States.

Instead, the bad guys here are “troglodytes,” to quote The Professor, an inbred race of monsters left to their own and abandoned by mankind. With their prodigious height and armor of bones, these cannibals appear to have more in common with the creature from Predator than with any documented inhabitants of the West. The scene with The Professor is meant to give us permission to root for the killing of “savages” again, as we might while watching a 1940s-era western produced in less overtly race-conscious times. Zahler goes to great pains to dehumanize the villains for the sake of de-politicizing the film. The “troglodytes” are huge, painted in albino makeup, and often given to wearing chilling animal skulls as masks. They also sport an inventively gruesome hallmark: The male warriors sew a piece of bone jewelry in their throats that emboldens them to produce battle cries that resemble, well, that of the creatures of any reasonably atmospheric horror film.

The de-politicizing is more offensive aesthetically than morally, leaching Bone Tomahawk of urgency. The western, like the horror film (and Zahler is essentially fusing the two here), is at its best when operating as a subterranean response to political moors, even if the response its offering proves disreputable. Contemporary filmmakers put too high a premium on political correctness now, often failing to understand that an unapologetic reveling in subject matter, a willingness to get dirty to expose social fears and pressure points, is usually more evocative, more resonant, more revealing, than a bounty of obvious, polite platitudes. Bone Tomahawk is skittish about its racism, self-conscious in a manner reminiscent of Django Unchained.

But it’s also intense on its own superficial terms. Zahler has a talent for action scenes that unfold counter to the beats one typically anticipates. The troglodytes descend on their victims with a frightening sense of rhythmic purpose, and the director has the shrewdness to keep them off the screen for most of the running time, leaving us with a gallery of veteran character actors who know just how to chew this well-worn material.

As the decent sheriff of few words, Kurt Russell commands the film with his confident willingness to recede into the background, knowing the audience will look to him anyway. Richard Jenkins uses his natural gravitas to imbue an antiquated sidekick routine with poignancy, producing a very fine Walter Brennan impression to complement the gifted Russell’s riffing on John Wayne. Matthew Fox and Patrick Wilson have comparatively thankless roles, but they hit their alternatingly passionate, callow notes with salty commitment, giving two of the more appealing performances of their respective careers, though the western genre truly flatters men either old in age or temperament. Taking measure of Russell and Jenkins’s poetically weathered faces, one wishes that Zahler had more explicitly faced the cultural demons lingering within his premise, attempting to exorcise them.