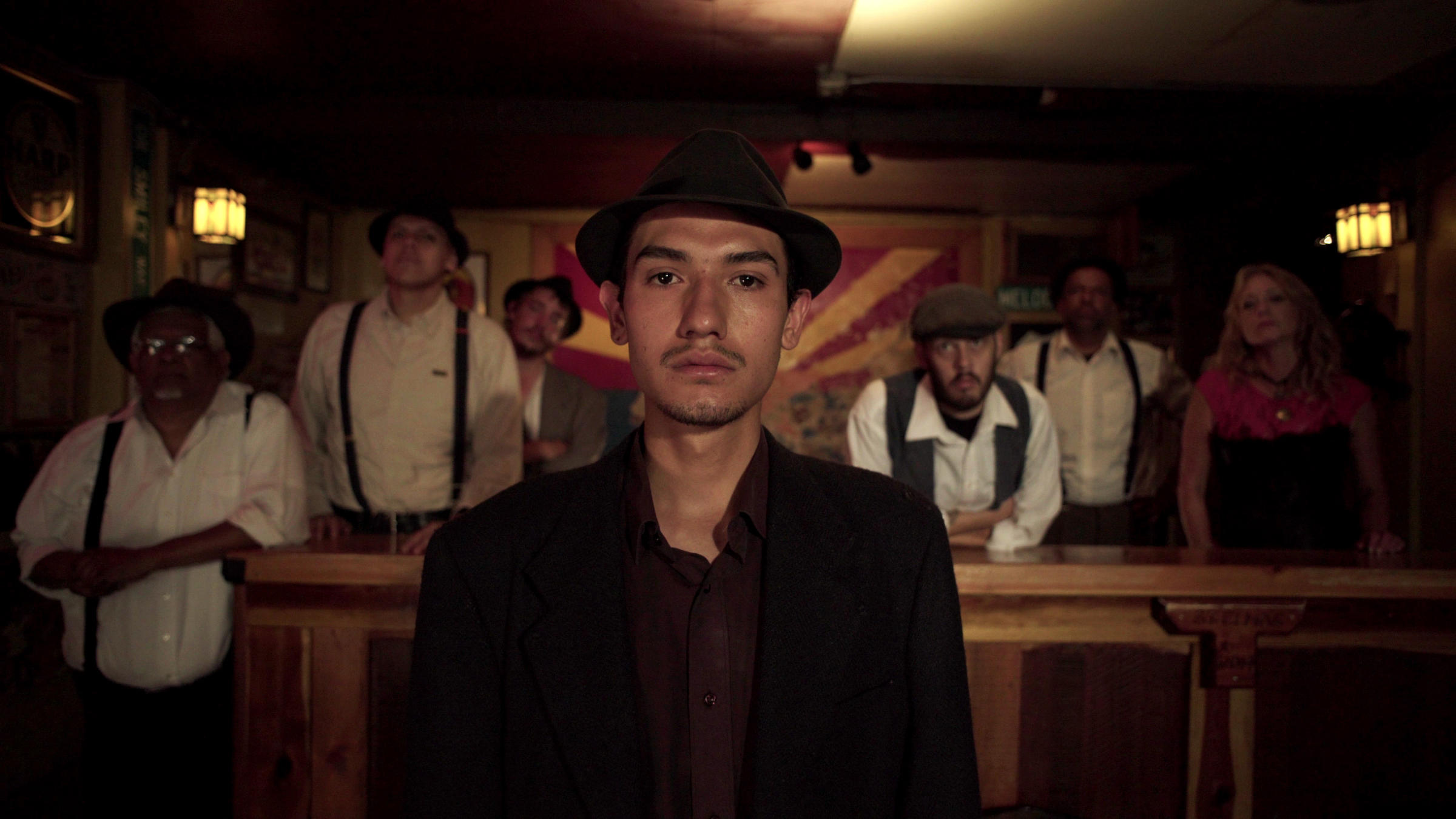 Robert Greene opens Bisbee ‘17 with a text crawl outlining the contours of the documentary’s heart of darkness. On July 12, 1917, the Cochise County sheriff, Harry C. Wheeler, collaborated with the Phelps Dodge Corporation to illegally deport 1,300 miners from the border town of Bisbee, Arizona. Phelps Dodge owned several large copper mines in Bisbee, and the miners, many of them Mexican immigrants, complained of discrimination, poor pay, and hazardous working conditions. World War I was raging, and copper was important not only to the war effort but to Bisbee’s existence. The Industrial Workers of the World, one of America’s fiercest labor unions, radicalized the miners, compelling them to go on strike, which was brutally rebuffed by Wheeler and his deputies. The miners were rounded up at gunpoint in a baseball field and forced to walk hundreds of miles without food or water, eventually left without any resources in the middle of the New Mexican desert.

This text is set against a red screen, while Keegan DeWitt’s score informs the exposition with plaintive dread. As a quotation from Colin Dickey’s Ghost Land: An American History in Haunted Places affirms, Greene is contemplating a place wrought by a double existence. Via the mine, this small western town is integral to American history in fashions that are admirable, namely for the role Bisbee played in providing munitions for WWI, as well as revolting, from Bisbee’s formation via warfare with the Apache to the race hatred and paranoia of the deportation incident. America is tormented by such a double existence at large, of course, as a theoretical bastion of freedom that’s built on slavery, land theft, and multiple campaigns of genocide.

As Fake It So Real, Actress, and Kate Plays Christine attest, Greene is overridingly obsessed by the possibility of multiple existences. For him, acting is a process that obscures and reveals truth simultaneously—or, more idealistically, clarifies a performer’s empathy by revealing the bottomless contradictions of even an ordinary role. Yet Greene doesn’t exalt acting with banalities about its mystery and majesty, as he’s a democratic artist who appears to believe that acting is an incantatory pastime that can and should be practiced by professionals as well as laymen. This idea—of acting as a simultaneous lie and a truth—corresponds with the ultimate double existence driving Greene’s films. It’s reductive to pigeonhole his work as belonging either to the documentary or fiction genres, as he understands that his subjects are “performing” whether they’re giving interviews in front of his camera or playing roles within a conventionally re-creational framework.

In his prior films, Greene wrestled with either a singular consciousness or with micro-communities. By contrast, Bisbee ‘17 is concerned with a town and a country’s soul, finding the filmmaker working within an epic framework. Greene interviews politicians, historians, and citizens intimately connected with the Bisbee Deportation on the sides of the mining companies as well as the miners, while vividly mapping out the town’s geography and political infrastructure. Greene utilizes this footage as a foundation for a morality play, in which contemporary citizens bring ghosts back to life, dramatizing their own demons in the process, though many of these citizens are already conjuring the past with works of performance art that include tours, audiobooks, and radio shows. Art is shown by Greene to be an alternate dimension, a realm in which we try to summon ghosts.

In an agonizing episode, a family is split between both sides of the deportation, as Sue Ray recalls how her deputized grandfather, Edward Cook, helped to haul her uncle Archie away for collaborating with the miners. Like many of the people Greene interviews throughout the film, Sue sympathizes with the mining company, likening the strikers to communists, socialists, and other “subversives” while nevertheless nurturing a lingering love for Archie. In one of the film’s most astonishing moments, two men in Sue’s family, Mel and Steve, play the respective roles of Edward and Archie, in scenes in which brother betrays brother. At one point, the men move to the side of the frame, revealing that Sue has been watching the dramatization aghast. We aren’t told if the scene has altered Sue’s sympathies, but she appears to have had a catharsis. Unless Sue’s performing a role that she suspects Greene may have anticipated of her: of an old-school conservative who sees the error of her ways. Such mysteries give Bisbee ‘17 a thorny intensity.

Greene shot Bisbee ‘17 in July 2017, in tandem with the 100th anniversary of the Bisbee Deportation, and the film gradually builds to a reenactment of the incident. As Greene works his way toward dramatizing an act of bigotry and fear-mongering that’s symptomatic of how America keeps its populace in check, a mystery dogs the film, and it’s the same mystery that dogs American politics: Why do conservative voters so reliably side with industry over workers when they belong to the latter party? And why do so many of these individuals continue to fall for transparent dog whistles, such as “communists,” “socialists,” “welfare cases,” and, well, “immigrants”?

Bisbee ‘17 suggests that such misplaced loyalty springs from an addiction to the myth of America as a realm of unsullied self-governance, as embodied, in this case, by the rampant fictionalizing of the so-called shootout at the O.K. Corral in nearby Tombstone. Such a narrative requires an ignorance that people are willing to indulge, as it’s demoralizing and exhausting to face the possibility that one’s system of values is a lie. It’s easier to accept the Man’s standard of excellence, no matter how imbalanced it may be, and gauge one’s own sense of self-actualization by it. Which is to say that a threat to the Man is a threat to many citizens’ very sense of identity, which almost intuitively complements the ingrained racism that often corresponds with such values. At one point in the film, one person even tells Greene that the deportation already happened and is therefore none of his own business.

Greene, though, doesn’t judge or condescend to those who support the mining company, as he recognizes the emotional value of a system, no matter how diseased, that affirms sense of self. (This primordial need to do well, by a mass populace’s standards, is probably humankind’s greatest strength and ultimate source of evil.) When Dick Graeme describes himself as a “company man” who climbed the ladder from scrubbing mud to a supervisor’s office, his pride is poignant, even if he’s the sort of person who would’ve helped run the Bisbee workers out on a rail. Aptly, he gets to play one of the deportation’s architects at the film’s climax, telling a group of rebels that they’re “profaning” the “Battle Hymn of the Republic” by turning it into a union song. The scene offers another catharsis, allowing townspeople to materialize their bitterness and uncertainty, and the intensity of Graeme’s convictions is powerful, seemingly revealing the bedrock of American neurosis.

When Graeme says he ascended the corporate ladder, he’s implicitly asking the strikers: “I did it, why can’t you?” This question is at the heart of conservative politics and refuses to account for racism, sexism, and the mistreatment that Graeme himself probably endured. Such a question also refuses to hold a corporation accountable for hoarding its riches. But if Graeme were to question his beliefs, he might slide down a rhetorical slope in which his achievements, perhaps unfairly, were concluded to mean less than he thought. And not all the “company men” are elderly white people either. Mary Ellen Dunlap, for example, is the first person to be elected in Bisbee to clerk of superior court not only as a Hispanic but as a Republican. Her boyfriend, James West, is a handsome “good old boy” who clearly sympathizes with the mining companies, and who’s recruited to play one of the men who drives the protestors out of town, while Mary Ellen plays the mother of one of the Mexican deportees. The ironies and contradictions are head-spinning.

This epic canvas invigorates Greene, who fuses a procedural documentary, in the key of Frederick Wiseman’s films, with tableaux that wouldn’t be out of place in a horror western. The mines haunt the poverty-stricken Bisbee, as rendered in compositions that reveal them to be weirdly beautiful scars on the land as well as the fabric of the American psyche. When Fernando Serrano, a young Mexican-American who eventually comes to play Mary Ellen’s son in the reenactments of the deportation, first emerges in the film, Greene follows him in a sophisticated tracking shot that honors western tropes while underscoring the artificialities of Bisbee ‘17 itself—as this long sequence, which follows Fernando into the depths of a historic theater as he assumes the skin of his role, was almost certainly planned beforehand. The theater itself is a metaphor for the past that’s hidden underneath the present, which Greene unsettles, refashioning a disgraceful national incident into a communal reckoning that offers a deeply qualified hope for discourse. Greene obliterates notions of objectivity to find the manna of a town’s emotional identity, fashioning a searing work of American folk art.