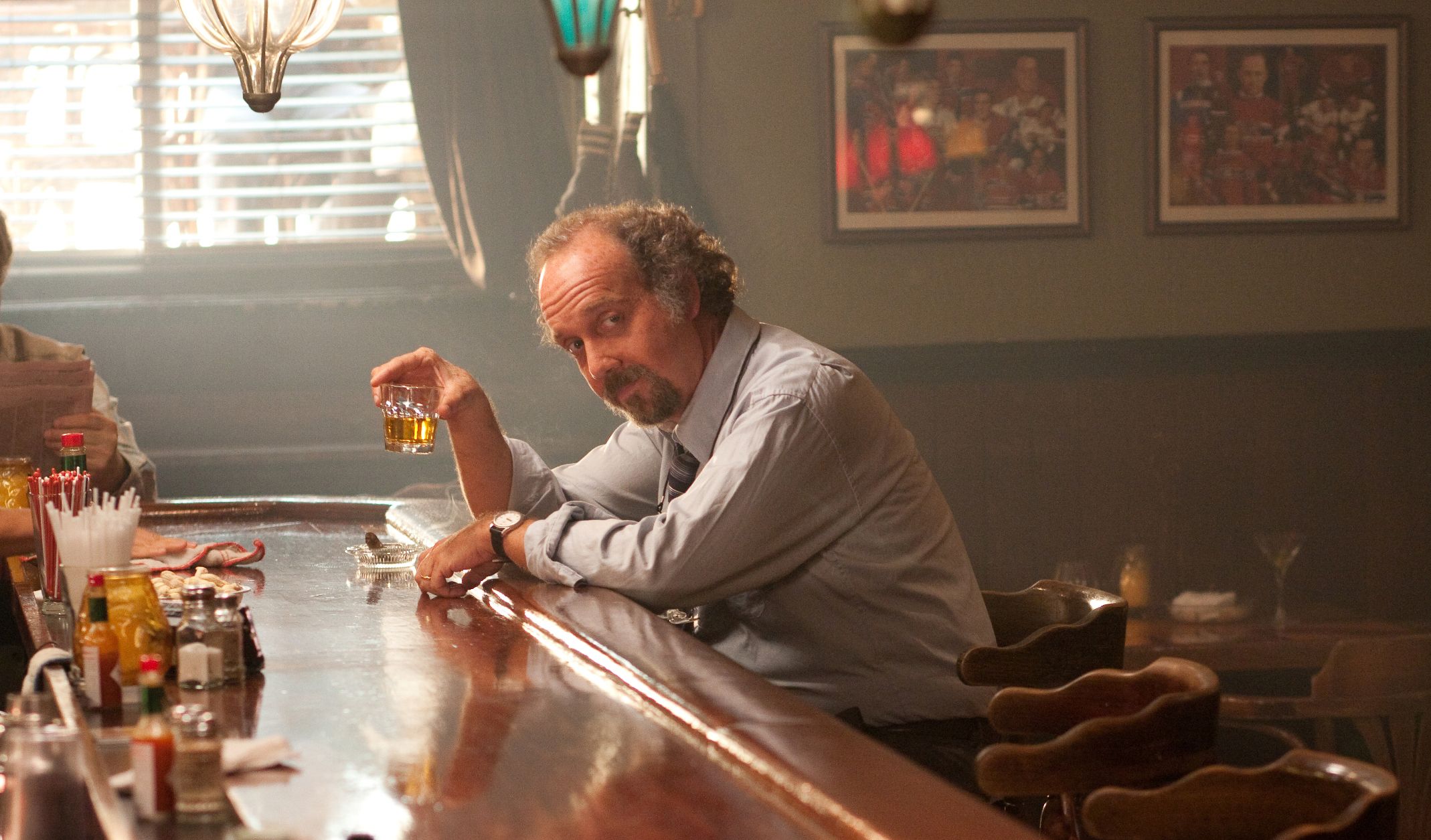 An adaptation of Mordecai Richler’s acclaimed novel, Barney’s Version attempts a sprawling vision of unruly, outsized, sloppy life through the particular tale of Barney Panofsky (Paul Giamatti), a Canadian TV producer who in his waning days reflects back on his three rocky marriages. Or, at least, that seems to be what it’s after, as Richard J. Lewis’s lengthy but aimless saga generally goes about its funny-serious business without a guiding purpose, detailing the ups and downs of Barney’s matrimonial days and nights with so little verve or intention—and with so little of the unreliable-narrator ambiguity implied by its title and flashback structure—that the effect is like reading a dead man’s day calendar. Certainly, dutiful recitation of events is the film’s primary calling card. Michael Konyves’s script takes great pains to schematically lay out Barney’s dying memories of how, in 1974 Rome, he married a beautiful, unfaithful bitch (Rachelle Lefevre), then after her suicide he wed the daughter (Minnie Driver) of a condescending wealthy family, and after experiencing love at first sight with Miriam (Rosamund Pike) on his second wedding night, he eventually tied the knot with her, had two kids, and ultimately destroyed that union via infidelity. Oh, and he was also accused of murdering his best friend, Boogie (Scott Speedman), whom he caught shtupping his second wife.

Lots of material, to be sure, and in longtime TV director Lewis’s hands, none of it the least bit meaningful or energetic. Barney is introduced making a prank call at three in the morning to Miriam’s new husband Blair (Bruce Greenwood), thus immediately marking the character as a loutish rascal, and the man’s ensuing crude, sometimes cruel, and self-interested behavior make plain that he’s flawed. Yet when Barney’s grown son, Michael, describes him as “a miserable ungrateful prick,” it seems a tad harsh given the preceding material, in which Barney’s affection for, and jealousy over, Miriam seems born from genuine affection, not to mention the depiction of his previous two spouses as shrill, repugnant harpies.

Barney’s Version’s inconsistent conception of its protagonist is exacerbated by a larger unevenness of tone, with the film’s tepid humor weakened by a perpetual undercurrent of sorrow, and its grave drama made trivial by the absence of an overriding thematic objective to the proceedings. Barney does this, then that, then something else, and along the way comes to understand what? That his two destined-to-fail marriages actually failed, and that he botched the one he cherished? So what? Lewis’s film wants to elevate its protagonist’s grief to something tragi-comically significant, but the incidents, conflicts, and catastrophes that befall its characters never rise above the mundane, and prove insightful even less frequently.

Overstuffed and yet underwritten, Konyves’s screenplay shoehorns in subplots in an attempt to remain “faithful” to the novel, including the aforementioned murder-suspect thread (which feels teleported in from another script) and Barney’s relationship with the aging star of his company’s popular soap opera. All these scenarios, however, merely call attention to the story’s floppiness and to the director’s inability—unlike David Fincher with The Curious Case of Benjamin Button—to enhance and enrich the material’s concerns with time and regret through deft aesthetics. Barney’s Version looks and sounds like every other perfunctory piece of awards-season mush, right down to a score that soars, swells, and twinkles for maximum emotional manipulation.

Giamatti similarly hits all the predictable notes as Barney, the actor regularly tilting his head while talking, prefacing every sentence with an introductory “eh…,” and generally doing the same wacky-yet-somber shtick he’s been recycling, every year or two, since Sideways. He’s not awful, nor is Speedman, Pike, Driver, and Dustin Hoffman as Barney’s loyal, dissolute former cop father. But none of them are engaging either, what with each role defined in such limited and often unbelievable terms—especially Miriam, whose attraction to Barney and grief over his betrayal is never sufficiently dramatized—that they, like the film and its descent into Alzheimer’s-is-sad bathos, remains an emotionally and intellectually one-dimensional affair.