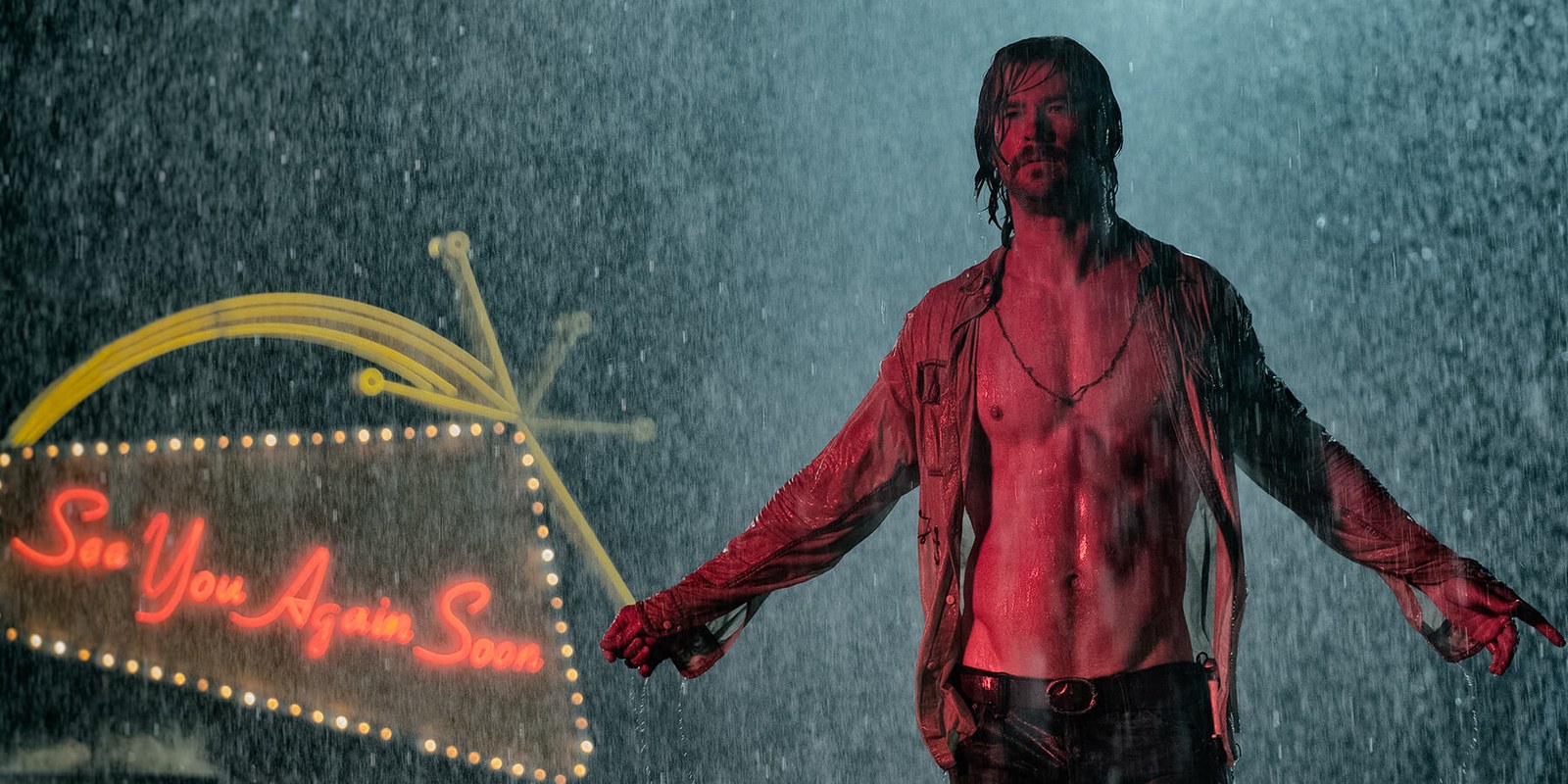 Set at a hotel that straddles the California-Nevada border, writer-director Drew Goddard’s Bad Times at the El Royale immediately announces its obsession with duality. In 1969, the El Royale is a shadow of its former glory as a bustling gambling hub popular enough to be sung about by Dean Martin. Gambling is now outlawed on its premises, and the mostly vacant hotel is run almost single-handedly by a bumbling greenhorn, Miles (Lewis Pullman), who’s obligated to tell everyone who walks through the door about its proud history and singular offering of rooms on both sides of the border. The kitschy appeal of the place may be gone, but someone, somewhere, seems very invested in Miles’s gleeful act of keeping up appearances.

The El Royale stands as a character unto itself, a triumph of meticulous period detail from floor to ceiling, including a wondrous array of gaudy carpets and wallpaper, extravagant lobby fireplaces, vibrant neon signs, and a grandiose jukebox that pumps out the ‘50s and ‘60s R&B hits that largely make up the film’s soundtrack. The pop-psychedelic spirit of the era is infused in every inch of the hotel, but you can also feel it depressingly fading. Indeed, this place almost seems preternaturally aware that the flower children are about to wilt under the dark and looming shadow of Nixonian paranoia.

Goddard’s film gradually doles out the sordid details of the El Royale’s past, including the unscrupulousness of its construction, on a night when four strangers arrive separately at the hotel, each one requesting a room that meets particular specifications. These types—a priest (Jeff Bridges), a hippie (Dakota Johnson), a soul singer (Cynthia Erivo), and a traveling salesman (Jon Hamm)—suggest the players in a walks-into-a-bar joke. Naturally, only one of them is really who they say they are, but like these seemingly stock characters and the El Royale itself, the film is more complex than it initially appears, and what begins as a cheeky retro chamber drama morphs into an often expectation-busting blend of noir and pitch-black comedy.

Soon we learn of a secret corridor that runs along one side of the hotel, complete with two-way mirrors and optional speakers, meaning the El Royale is a playground for the voyeur—or anyone wanting to, say, blackmail high-level politicians who may have passed through and stayed in the area. While Miles eventually cops to the fact that “management” forces him to record certain guests, the film teases a conspiracy-fueled plot that ultimately never comes into complete focus. In one sense, it’s a disappointment to see the film ultimately do so little with such a juicy storyline, but in eliding the more far-reaching scope and full-blown psychedelic paranoia of something like Paul Thomas Anderson’s Inherent Vice, Goddard is better able to milk some electric drama from the contradictions and complexities of his characters’ beings.

As the film’s camera follows numerous characters as they wander through the hotel’s back corridor, often catching glimpses of things meant to remain behind closed doors, the audience begins to see these individuals in different lights. It’s impressive to behold the ease with which Goddard takes to this thorny and prismatic view of his characters’ troubled pasts and secret agendas, effectively forcing us to continually question the nature of our preconceptions. And the compositions throughout these scenes, some of which we view through reflective surfaces such as mirrors, work to further implicate us in the film’s voyeuristic tendencies. That most of these sequences are set to Erivo’s Darlene Sweet belting out doo-wop a cappella as she practices in her room only adds to their offbeat allure.

As he moves Bad Times at the El Royale from the hotel’s dark hidden passages to the warm glow of its elaborate lobby, Goddard continues to peel back the layers of his characters’ experiences, tightening the screws on them while also breathing some fresh life into the tiresome structural gimmickry that drives, and often sinks, so many postmodern thrillers in the quarter-century since Pulp Fiction. The film’s use of chapters, a novelistic device that’s fairly overplayed as of late, is particularly effective for the way it at once elucidates the moral dilemmas that grip the characters and the social and political spectacles of the day in which they’re caught up, including the Vietnam War, F.B.I. overreaching, and the rise of cults. The timing of these chapter breaks also brings a propulsive sense of urgency to the Bad Times at the El Royale, creating a rich emotional chiaroscuro that distinguishes Goddard’s film from other works blatantly inspired by Quentin Tarantino.

Soon after Chris Hemsworth’s Billy Lee, a Manson-like hippie cult leader, shows up on the scene, guns a-blazin’ and obliques a-poppin’, he goes into a lengthy speech that literalizes the film’s themes of duality and notions of right and wrong and good and evil, Goddard risks slipping into straight-up soapboxing. But Goddard still manages to even wind this one-note baddie toward a cutting scene that brings an unexpected emotional weight to his seemingly invincible megalomania. As the moment comes after Darlene, the victim of racist and sexist harassment on several occasions, finally calls him on his bullshit—she dismissively declares, “I’m bored of men like you”—after he forces everyone to indulge in a series of power-grabbing mind games, we’re treated to one of the more subtle and unexpected nods to the dynamics of the #MeToo movement. And it’s in its ability to upend expectations, both in terms of narrative and depth of characters, that Bad Times at the El Royale overcomes the shortcomings of its sprawling, messy narrative.