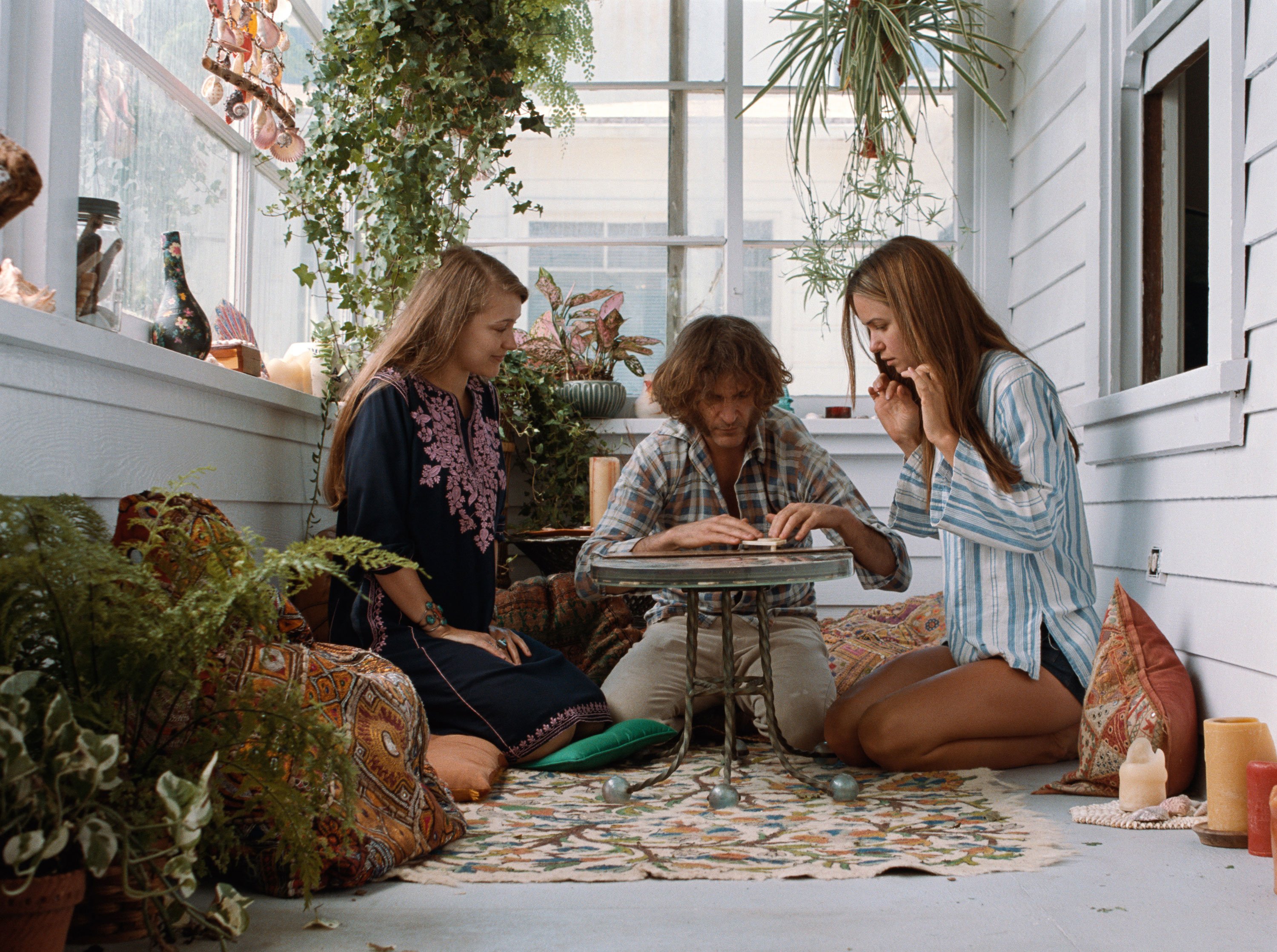 Like the 2009 Thomas Pynchon novel on which it’s based, P.T. Anderson’s Inherent Vice is set in 1970 in the fictional town of Gordito Beach, California. As filmed by the writer-director, the locale suggests the West Coast of Robert Altman’s The Long Goodbye and other New Hollywood lamentations on the death of 1960s counterculture. It’s familiar but irrefutably different, seen distinctly through Anderson’s lively, rambunctious style, riddled with hypnotic dissolves, push-ins, tracking shots, and close-ups. Likewise, one could see Pynchon’s novel as a reminiscent yet unique take on the works of Dashiell Hammett and Raymond Chandler. In the book, Pynchon infuses his own memory, his own view of history and pop culture, into a Sam Spade world, and in turn, Anderson has transformed Pynchon’s world into his own raucous trip through the come-down of the Nixon era, one which speaks to the filmmaker’s personal and vast cinematic memory, philosophies, and politics.

The film begins with Joanna Newsom’s Sortilège, working as both ethereal on-screen presence and narrator, reading directly from Pynchon’s novel, an element of fidelity in a very loose adaptation. Her charge, eternally high private investigator Larry “Doc” Sportello (Joaquin Phoenix), is tossed into unknown danger when he decides to help out Shasta Fay Hepworth (Katherine Waterston), his troubled ex-girlfriend. In her time away from Doc, she’s gotten mixed up in some bad business with Mickey Wolfmann (Eric Roberts), her real-estate-tycoon lover, and a shady organization called the Golden Fang. And as one might expect from hardboiled pulp, the story quickly grows wild and convoluted, complete with toothless recovering addicts, attentive maritime lawyers, blackmailing cuckolds, vampiric hit men, drug-fiend dentists, and “Bigfoot” Bjornsen, a violently sad Joe Friday type played with astonishing comic energy and control by Josh Brolin.

For the many narrative alleys Anderson’s film ducks down, the relationship between Bjornsen and Sportello remains crucial, a tenuous partnership between a brooding, buzz-cut hippie-hater and a humanistic dope-head with an office in a doctor’s practice. Though Inherent Vice is a far more slippery and volatile work than arguably any of Anderson’s previous work, it builds off the same sort of relationship that denoted his two previous films. The gruesome capitalist and the power-drunk preacher depend on one another in There Will Be Blood, as does the ferocious, impulsive animal and the articulate, repressed charlatan in The Master. In this case, two opposing views of how the promise of America in the 1960s started to decay are juxtaposed, one that sees drugs as the root of all evil, and another that sees the rise of justifiable violence and municipal corruption as the beginning of the end.

Of course, both are self-serving fictions, vague memories molded, dulled, or replaced by movies, books, music, news, gossip, and folklore. Anderson’s characters are broad comical caricatures that have grown from these fictions, not unlike the ones you could find in Ralph Bakshi cartoons. And much like Pynchon’s love of language and words animated his hazy sketch of Nixon-era California, Anderson enlivens his world by letting his actors play with the language, drawing out and abstracting their deliveries, and allowing them physical free reign. Each performer brings their own personal verve to their character, from Owen Wilson’s thought-dead saxophonist to Maya Rudolph’s nurse-secretary to Martin Donovan’s ruthless facilitator. Of course, Anderson’s technique remains stunningly sharp and acute, resulting in images equally beguiling and gorgeous, but he’s never balanced this control with such subtlety to get at the heart of his antic, uproarious vision of the past.

Inherent Vice is itself an attempt to recapture a memory, of the revolutionary moment of the New Hollywood and a time when it seemed film culture was at its very peak, and Doc’s calamitous world both mocks and mourns that idea. The filmmaker reportedly found much of his inspiration from the likes of Airplane! and Top Secret, films fueled by rampant comic invention, and it’s that very element that roots the film in the present, by never letting the drama feel as if it’s been set in the amber of nostalgia. Orpheus was told to not look back, and Anderson’s viewpoint seems to be the very same, as Doc’s attempts to chase after his memory of Shasta as much as the woman herself lead him further away from his current life.

These thematic concerns are echoed in the treatment of both Bjornsen’s violence and corruption, and Doc’s drug addiction. They’re both looking to recapture a moment of clarity, and shield themselves from the fact that neither of them have any claim to reliability anymore. The dangers of filmmakers trying to replicate a golden era rather than embrace the present are part and parcel of Inherent Vice, but the ramifications are political as well. Trying to find out who was at fault for the corruption and discontent of the Nixon era, of trying to find the blame for what squandered America’s promise, is as pointless as trying to figure out what exactly the Golden Fang does, or even is. It’s all lost to tainted, addled, disparate perspectives, recollections hardened or malformed by prejudice and resentment, a point underlined when a jittery doctor explains away a patient’s Swastika tattoo as if it were a Hindu symbol, which it actually is. And there are plenty more symbols and allusions to unpack in Anderson’s radical, unsparing comedy, but they never get in the way of the constant sense of discovery and creation. Late into the film, Doc insists a friend not attribute a saying to a historical group, but own it as his own thought. Anderson’s suggestion is simply to find yourself in art and history rather than seeking absolute truth, which allows you only to be ruled by the contours of someone else’s memories and beliefs, and adapt to someone else’s fiction.