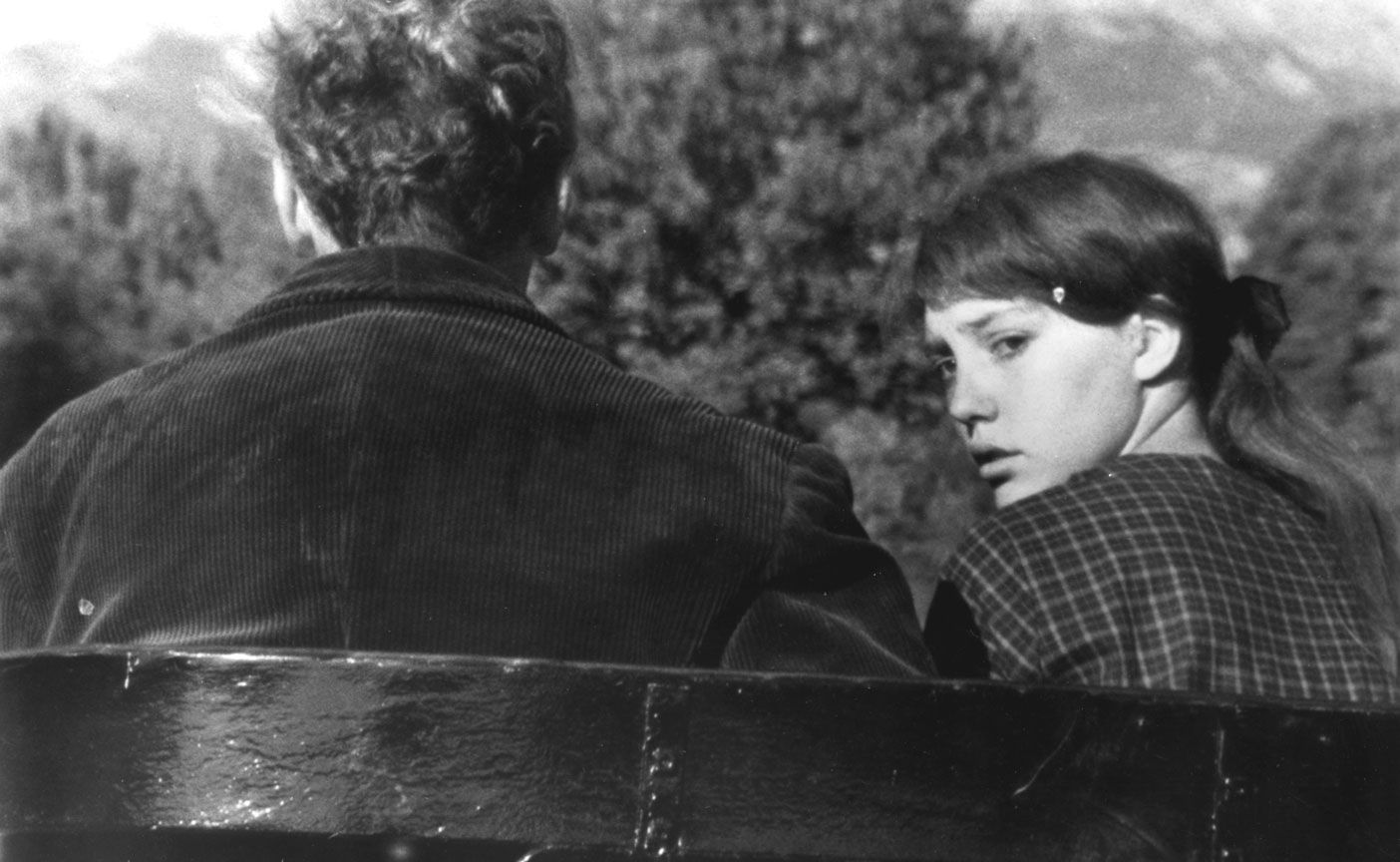 Somewhere in the fabric of Chris Marker’s eternally astute Sans Soleil, the female narrator orates from her cameraman pen pal’s observations from Japan: “I have returned from a country where death is not a partition to cross through but a road to follow…The partition which separates life from death does not appear so thick to us as it does to a Westerner. What I’ve read most often in the eyes of people about to die is surprise. What I read right now in the eyes of Japanese children is curiosity, as if they were trying, in order to understand the death of an animal, to stare through the partition.” Robert Bresson’s 1966 masterpiece Au Hasard Balthazar is a film about a donkey who embodies the essence of Marker’s “partition.” And like Marker’s sanctified chatter, Au Hasard Balthazar possesses a strictly balanced, bemused-unto-neigh-indifferent attitude toward delineating between the wry and the glum, the sacred and the profane. Separating those elements, Bresson seems to demonstrate, only robs each element of its consequence and mystery.

But let’s take just a moment to set aside all due praise for what might be the most rewarding film in the upper reaches of virtually every last “greatest film ever” poll—if it can be said that being the most transcendental provides the richest repayment plan—to reflect on the indescribable oddness of Bresson’s film. It’s a quality that almost gets glossed over in the hunt for the buffet of “pure cinema” (as though one needed to search to find it) and the quest for the deliverance of cinema from vulgarity, to the approval of both Paul Schrader and Thomas Aquinus. I’m not merely referring to Bresson’s celebrated formal extremity: the tight, oblique framing; the hot Foley-sound collage; the disorienting clarity of the editing. No, the “oddness” of Au Hasard Balthazar can be summed up in the question: Why a donkey? More to the point: Why a donkey that’s treated, on the surface anyway, as a character over being presented as a symbol or cipher?

The film begins with a sonic gesture of equanimity between human concerns and the animal kingdom when, under the credits, the music of Schubert is brought to an abrupt halt to allow a donkey to have its crack at accompanying the title scroll. It provides the blueprint for the rest of the film, in which a young French farmgirl, Marie (Anne Wiazemsky), and her companion donkey, Balthazar, grow up together, learn the rules of the game separately, and ultimately fall victim at the hands of vice.

That “vice” is embodied mainly in the character of Gerard (François Lafarge), a young punk prone to throwing firecrackers on the ground in front of Balthazar and leering at Marie and whose presence in the film could almost be said to interrupt the oasis of idyll of the film’s opening 10 minutes like the braying donkey interrupts Schubert. Gerard is the first character in the film who seems conscious of his own capacity for abuse, though to characterize the beginning of the film as idyllic would be to ignore the more benign disappointments of life represented, for one, in the form of a terminally ill girl whose family seems to be “caring” for mechanically, waiting for her to die as the cards of chance (the “hasard” of the title) have dealt.

The handling of Gerard, who at one point smashes up an entire bar simply because he knows the town bum-cum-noveaux-riche-heir will write a check in his drunken revelry to cover the damages, proves Bresson is still careful not to pass easy judgment on the character, just as he appears to attribute very little Christian significance to morality. (The baptism of Balthazar is staged as a moment of muted slapstick, when the ass’s tipped-forward head allows the holy water to run off of his gargantuan forehead in a steady stream.) By binding any emotional lattice and stripping even the most harrowing passages from reactionary justifications, foremost when Marie’s mother, very late in the film, sits on a hill with her back to both the camera and the gang of thugs led by Gerard, exclaiming flatly that they shouldn’t take Balthazar away from her because he’s “a saint.” It’s a proclamation that invariably gets taken at more than face value, but Bresson’s staging of Balthazar’s final moments among a flock of guileless sheep is without a single trace of martyr signifiers.

If saintliness is to be equated with undiluted acceptance, then the proposition turns Au Hasard Balthazar into the rare spiritual film that lowers the bar for saintliness, rather than elevating its chosen characters above the din of humanity. So, why a donkey? It’s the mundanity, stupid. To turn back to the ruminations from Sans Soleil, the lens of dispassion that Bresson invites us to look through during Au Hasard Balthazar embodies “a prayer which slips into life without interrupting it.”