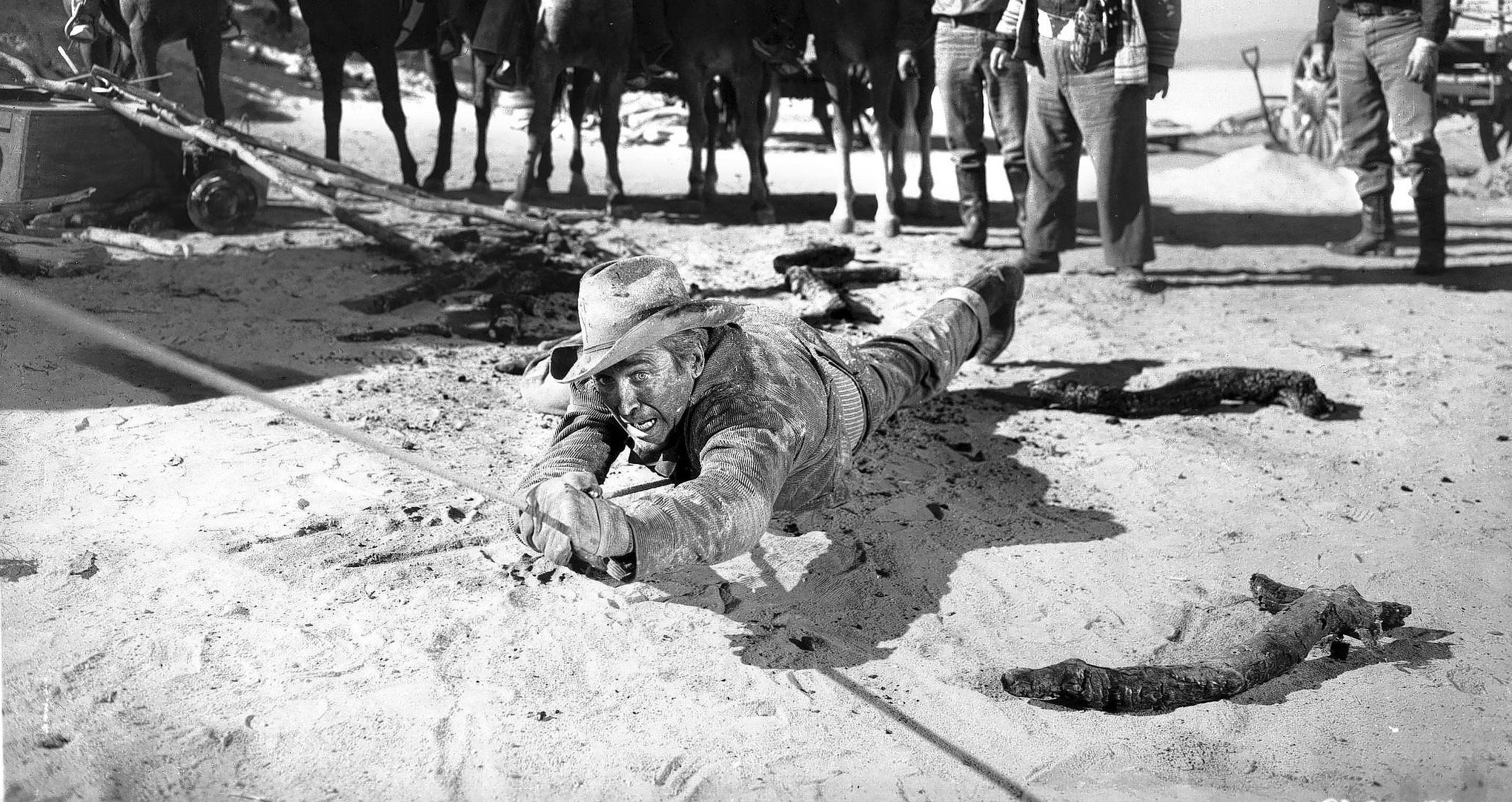 Early in 1952’s Bend of the River, there’s a startling swish-pan that segues from a resplendent arboreal landscape to a close-up of a man’s face, contorted by a lynching party’s noose. The elements of this scene—environment, violence, terse and ruthlessly expressive camerawork—are the DNA of Anthony Mann’s cinema, whether indoors amid the shadows of his early, low-budget urban thrillers or in the open air of his celebrated 1950s westerns. The subject of a thorough, 32-film retrospective starting this week at the Film Forum, Mann was an impeccable image-smith and a pitiless choreographer of brutality. Film noir was seldom blacker and the Old West never more severe than with him at the helm, yet his three-decade career displays a steely cinematic intelligence that transcends the facile “tough-guy” label his films were originally stuck with. Though it can be broken down into stages by genre, his is a remarkably consistent worldview of betrayal, pain, and the physical-spiritual toll of men obsessed with conquering nature and each other. “Modern disenchantment and bitterness crack the classical cement,” Jacques Rivette once wrote of the director’s modernist proclivities, and, indeed, is there a more striking sign of the darkening of classical American film than James Stewart facing a jagged ravine, unsure whether he’s the movie’s hero or its psychotic beast?

Born in 1906, Mann started out as a Greenwich Village stage actor and director before entering Hollywood as a talent scout and screening-test supervisor. His first films were a jumble of apprentice assignments, ranging from faux-Damon Runyon sentimentality (Dr. Broadway) to patriotic musicals (The Bamboo Blonde). Even here, however, there’s the atmosphere of cruelty of The Great Flamarion (starring Erich von Stroheim) and the nightmarish patterns of light and shadow of Strange Impersonation, both of which would find fuller expression in the string of noir thriller kicked off in 1947 with Desperate. As hard and dark as asphalt, these Poverty Row marvels (T-Men, Raw Deal, He Walked by Night) are fiercely situated in the anxious hangover of postwar America, where subterranean organizations must be perilously infiltrated and John Alton’s cinematography gives dazzling, ominous visual form to free-floating paranoia. This noir aesthetic is also detectable in Reign of Terror and Border Incident, a pair of stunners from 1949. In the former, the French Revolution is evoked with a ferociousness that keeps the painterly compositions from hardening into tasteful historical tableaux; in the latter, a hands-across-the-frontier procedural about federal agents and undocumented workers is enriched as the Mexico-California border becomes a two-sided mirror reflecting the viciousness from garden and desert alike. Both films are implacably lucid in their views of a world split, then, now and forever, into bloodthirsty gangs.

Mann came to the western in 1950, with no less than three electrifying oaters. The Devil’s Doorway humanizes Robert Taylor’s Native American rebel without condescension or pious speechifying, while The Furies captures the complex, crazy synergy between Barbara Stanwyck’s prairie Electra and Walter Huston’s cattle-ranch patriarch. It was in Winchester ’73, however, that the filmmaker located the ideal actor for his dissections of cowboy heroism. Here, the James Stewart who rides into town seeking “the gun that won the west” is a baleful, haunted version of the actor’s earlier dawdling sopranos, a man who’s been to war and seen horrors and, now back, expects to see more. During a barroom showdown, Stewart damn near decapitates his outlaw opponent with a sucker-punch; there’s a streak of nasty unease, of coiled violence, in this beloved actor that’s still shocking to see spring out. In the astonishing quintet of westerns they made together between 1950 and 1955 (Bend of the River, The Naked Spur, The Far Country, The Man from Laramie), Stewart is never a clear-cut “good guy.” Playing avengers, bounty hunters, and loners in fragile, budding communities, his characters come to heroism grudgingly, and then only as a way to externalize and exorcise the traumas crawling within them. No bronze frontier effigies, the Mann-Stewart protagonists are warped brooders negotiating the impending collapse of terrain, body, and mind.

Mann loved the west like he loved Greek tragedy or Shakespeare (Lears abound in his ranches), as an arena for moral and visceral conflict, so intense as to become mythical. Nature plays an integral role in these films, and Mann could film landscapes that were not just awe-inspiring sights, but also reflections of inner states: Gelid mountaintops, raging rivers, woods alive with hope and danger. At times nature can be a dispassionate observer, its splendor mocking the violent disputes of the characters. And violent they are. In this world, taking a bullet is getting off easy: People get dismembered under tractors, are scarred by scissors, burned, drowned, branded, have their mouths blasted off, and are crushed by boulders. (Manny Farber, one of the director’s earliest champions, dubbed him a “tin-can De Sade.”) Mann’s tactility, so sensual with nature, turns horrifying when dealing with violence. Think of Stewart agonizing in close-up while his right hand is shot off in The Man from Laramie, a moment as obscene as a castration. The impulses of heroism and brutality are often braided in his films, which is why 1958’s Man of the West remains Mann’s masterpiece. Here the Frank Capra knight placed among barbarians is not Stewart but Gary Cooper, whose sagging face must acknowledge his own nobility and savagery. It’s a proto-Peckinpah vision of shadow sides, exhaustion, and tainted paradises. Nature weeps and rejoices.

In addition to Mann’s non-westerns with James Stewart (The Glenn Miller Story, Thunder Bay) and his non-Stewart westerns (The Last Frontier, The Tin Star), Film Forum’s extensive retro also gives cinephiles the chance to catch many of the director’s less well-known works. There’s the solid guns-on-a-mission thriller The Heroes of Telemark, the barnyard-broad Erskine Caldwell adaptation God’s Little Acre, and the magnificent battleground drama Men in War. (The one worthless Mann item, the 1956 Mario Lanza lox Serenade, is blessedly nowhere to be seen.) And there’s also the epics, which curtained his career, starting with 1960’s Cimarron. Even today, there’s the tendency to downgrade the sweeping, all-star projects Mann shot for producer Samuel Bronston because of their sheer size, but that would be missing their sobriety, melancholy, and intimacy, qualities scarcely associated with the genre’s standard elephantine pageantry. Suffice to say that El Cid caps the filmmaker’s career-long interest in courage and its price with a trenchant act of faith, while The Fall of the Roman Empire achieves genuine grandeur in its portrait of a crumbling civilization’s cruel and moral sides canceling each other out. Splendid spectacle, and all Mann.

The Anthony Mann Festival will run for three weeks, from June 25 to July 15, at New York City’s Film Forum. For details, including ticketing information, click here.