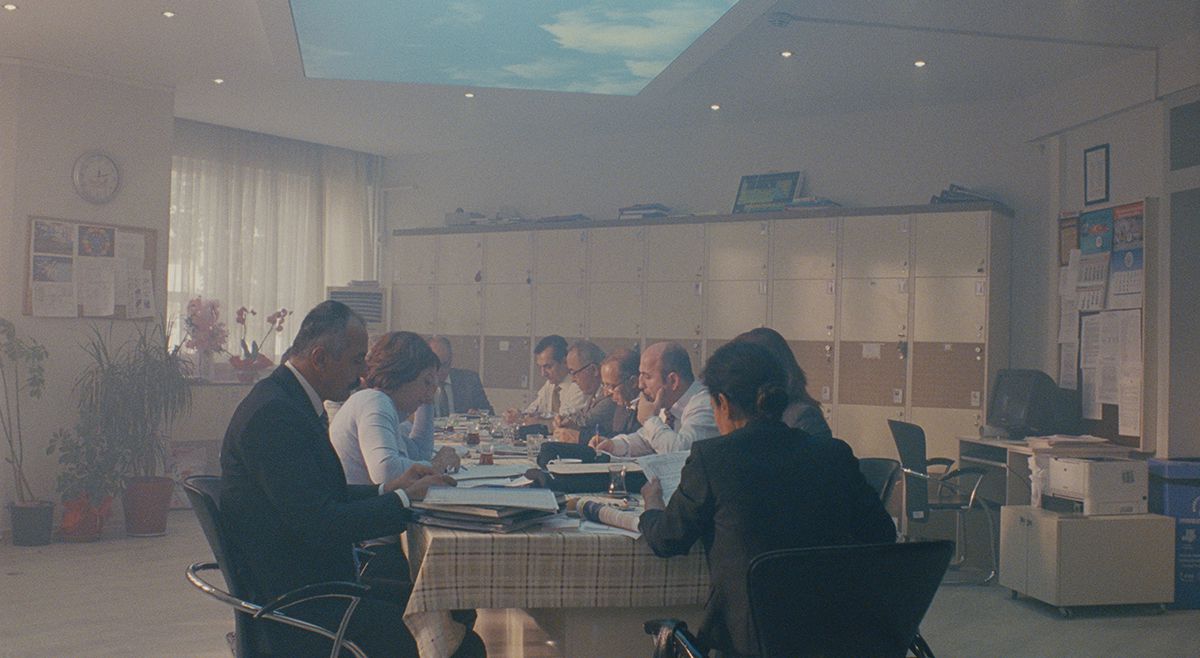 The prologue to Albüm functions as a kind of mise en abyme for the film as a whole. In a series of wordless scenes made to resemble a documentary, the entire process of artificial cow reproduction is shown in clinical detail. In a state-of-the-art barn, a bull is led to a cow but fails to copulate with her. Next, audiences glimpse a scientist artificially inseminating a cow egg under a microscope. A cow then gives birth in the same barn, as two men matter-of-factly pull the calf out of her by jerking ropes tied to the newborn’s feet.

In its hyper-realistic depiction of this procedure, these scenes bring to mind the scene from In a Year of 13 Moons set inside a meat factory. In Rainer Werner Fassbinder’s equally unsentimental film, unvarnished footage of meat being processed serves as an ironic commentary on a transgender woman’s sex-change operation, while also contrasting the woman’s emotional sensitivity with the brutal circumstances of her life. In Albüm, the unembellished portrayal of the synthetic reproduction of cattle serves to prepare viewers for the detached, caustic, and almost anthropological view of childrearing offered by writer-director Mehmet Can Mertoğlu.

The cow and bull of the opening scene symbolize Bahar (Sebnem Bozoklu) and Cüneyt (Murat Kiliç), respectively, a middle-class Turkish couple in the process of adopting a child after failing to conceive. Likening Cüneyt to an inept bull and Bahar to a cow is a harsh comparison, but Mertoglu implies that this is how Turkish society views barren, childless couples. Adoption is their only hope to avoid this stigma of failure, though even that’s not enough, as this is also frowned upon in their culture. As a result, they feel obligated to create the illusion of conception, gestation, and childbirth to mask the adoption. Bahar dons a fake belly and the two create a photo album made up of pictures of them on vacation and at the hospital to provide proof of pregnancy. When the adoption finally goes through, the couple moves to a new town where no one knows them to start a new life as a family.

The film’s deadpan humor adds real tension to several uncomfortable moments, many of them involving Cüneyt and Bahar lying to self-serving bureaucrats in order to maintain their secret. The result is a kind of comedic nightmare, as the state apparatus, while made up of civil servants who are more inept than sinister, forces everyone in the film into a series of increasingly convoluted falsehoods and relationships based wholly on mutual deception. This portrait of an anxious contemporary Turkey is a depressing one, gently but consistently pointing to the increasing sense of oppression, tension, and antagonism underlying the country’s social and political order.

The society revealed in Albüm is seemingly on the verge of dystopia. The casual racism of Bahar and Cüneyt, who pass on a potential adoption because the girl is too dark-skinned and resembles in their minds a Syrian or Kurd, points to Turkey’s ongoing political crises. Though never alluded to directly, the government’s involvement in the Syrian quagmire and its ongoing war with Kurdish separatists forms the backdrop for Bahar and Cüneyt’s tribulations. They’re shown to be infected by the bitterness and violence sown in Turkish society by these conflicts. When the couple is forced to flee their new home, they’re shown crossing a waterfall like refugees traversing an invisible border to start a new life. In comparing this couple to the Syrians who’ve swamped Turkey in recent years, Mertoğlu suggests that the authoritarianism that refugees try to escape can tag along with them across borders.

Review: By the Time It Gets Dark