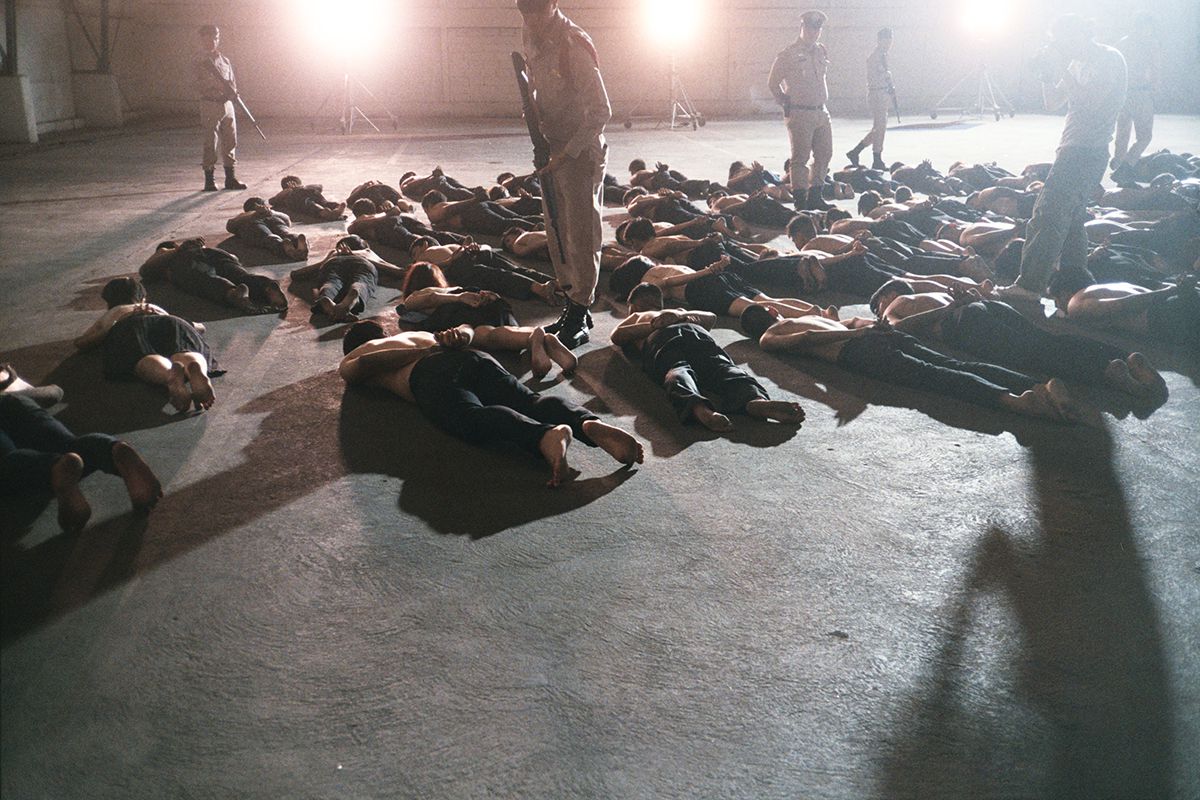 Anocha Suwichakornpong’s By the Time It Gets Dark is obsessed by prismatic motifs, in which images are embedded within other images. One of the film’s first shots is of a window in a country home, composed of opaque panes that block out a view to the outside, except for a square in the top left that’s missing a pane, affording one a glimpse of a lovely tree. In this context, the tree suggests a hidden world, barely in sight, obscured by human-forged bric-a-brac. Later, a filmmaker observes to her interview subject that their reflections in the TV are beautiful, commenting on another prism. Mushrooms are a recurring symbol in this film as well—and what’s their nature? They’re industrious fungi, which grow and tunnel through a variety of surfaces, and some kinds are known for their hallucinogenic properties, which suggest yet another expansion of worlds within worlds via altered consciousness.

Suwichakornpong earnestly and ambitiously attempts to redefine cinema’s conventional grasp of consciousness, in which we often follow characters through a seemingly preordained narrative structure. Like any young artist, she leans on the work of her elders, particularly in the film’s nevertheless visionary second half. Busy, debauched Thai cityscapes are contextualized in a manner reminiscent of Chris Marker’s cinema, as the settings are implied, through a cumulative editing structure, to distract mass consciousness away from a primordial cultural atrocity that’s alluded to in the opening scenes. An image of a woman cleaning a toilet in a public bathroom has a chilly, dehumanizing, and, yes, prismatic symmetry that would make Stanley Kubrick proud, and that also affirms Marker-esque preoccupations with luxury as evil. First-person images of highways as they’re navigated in darkness—another kind of transition motif—unavoidably recall David Lynch’s oeuvre.

Yet, the film distinctively eats itself alive, or perhaps grows out from within itself in new directions, sprouting its own mushrooms. After three opening vignettes that establish the film’s “reality” as being vast and malleable (people pray at a house, protestors concoct a revolt against their militaristic regime, a mass killing is revealed to be a film within the film), Suwichakornpong settles for a time on a comparatively straightforward narrative in which a filmmaker (Visra Vichit-Vadakan) stays in the countryside with Taew (Rassami Paoluengton), a famous protestor who was present at the Thammasat University massacre in 1976. The filmmaker is young and given to clueless patronizing, calling Taew “living history,” which the latter greets with the haunting insistence that she’s merely a “survivor.”

By the Time It Gets Dark gradually enters a free-associative state, as the on-screen filmmaker takes a trip into the woods, encountering a potential magic mushroom, thinking of the mushrooms of Georges Méliès’s A Trip to the Moon, later waxing for an interminable length about an early brush with telekinesis. Then, Suwichakornpong introduces a new protagonist, Peter (Arak Amornsupasiri), a handsome young man working in a tobacco farm, which leads to a gorgeous montage of the plants as they’re dried and harvested, as Suwichakornpong takes great care to show us realms that neighbor other realms, perhaps unnoticed by those distracted with their own thoughts. (Never mind the Thammasat University massacre, would the unnamed filmmaker in the narrative be able to truly see this tobacco plant, in her myopia, which is our collected myopia?)

By the time Peter is also revealed to be an actor, the tobacco footage is shown, like so much of the film, to be a fiction within a fiction (a realm within a realm), and we begin to grasp that Suwichakornpong is after philosophically robust aesthetic game. Peter is connected very tangentially to the film that’s being conceived around the massacre—an atrocity that looms over Thailand and By the Time It Gets Dark like an enormous not-quite-seen elephant. Suwichakornpong explores the limitations of art to adequately capture the unimaginable violation of mass atrocity, in this case the murders of student protestors by Thai state forces; more agonizingly, she wrestles with the insidious distracting properties of art, which might not capture anything of its subject but still impart to us a misleading sense of knowledge. In other words, the film is concerned with its own predestined failure and hypocrisy.

By the Time It Gets Dark pointedly loses sight of the Thammasat University massacre, ironically growing more hypnotic, rapturous, and overpowering, discarding conventional narrative to hunt for wild emotional shards, picking them up like fragile mushrooms from among the great woodland of narrative obligation and platitude. Peter is an actor, and so a long reverie of him smoking a cigarette in a car is retrospectively revealed to be acting, yet that simulation is revisited by its architects (other filmmakers) in a moment of astonished silence that grants the sequence a kind of rebirth—its fakeness captures the truth of the elusiveness of truth.

When Peter dies, the filmmakers watch this scene to try to find him, wrestling with existential frailties that’re brought into stark clarity by their inability to do so. It’s logical, then, that this film must end with its own literal dissolution, relaxing its grip on us so that we may revel in how much we’ve felt and in how little we’ve learned. There’s a gap between those two interrelated sensations, which Suwichakornpong frequently dances around, in which one might glimpse an ecstatic valley of intuition that’s greatly sought by formalists.

Interview: Kore-eda Hirokazu on After the Storm