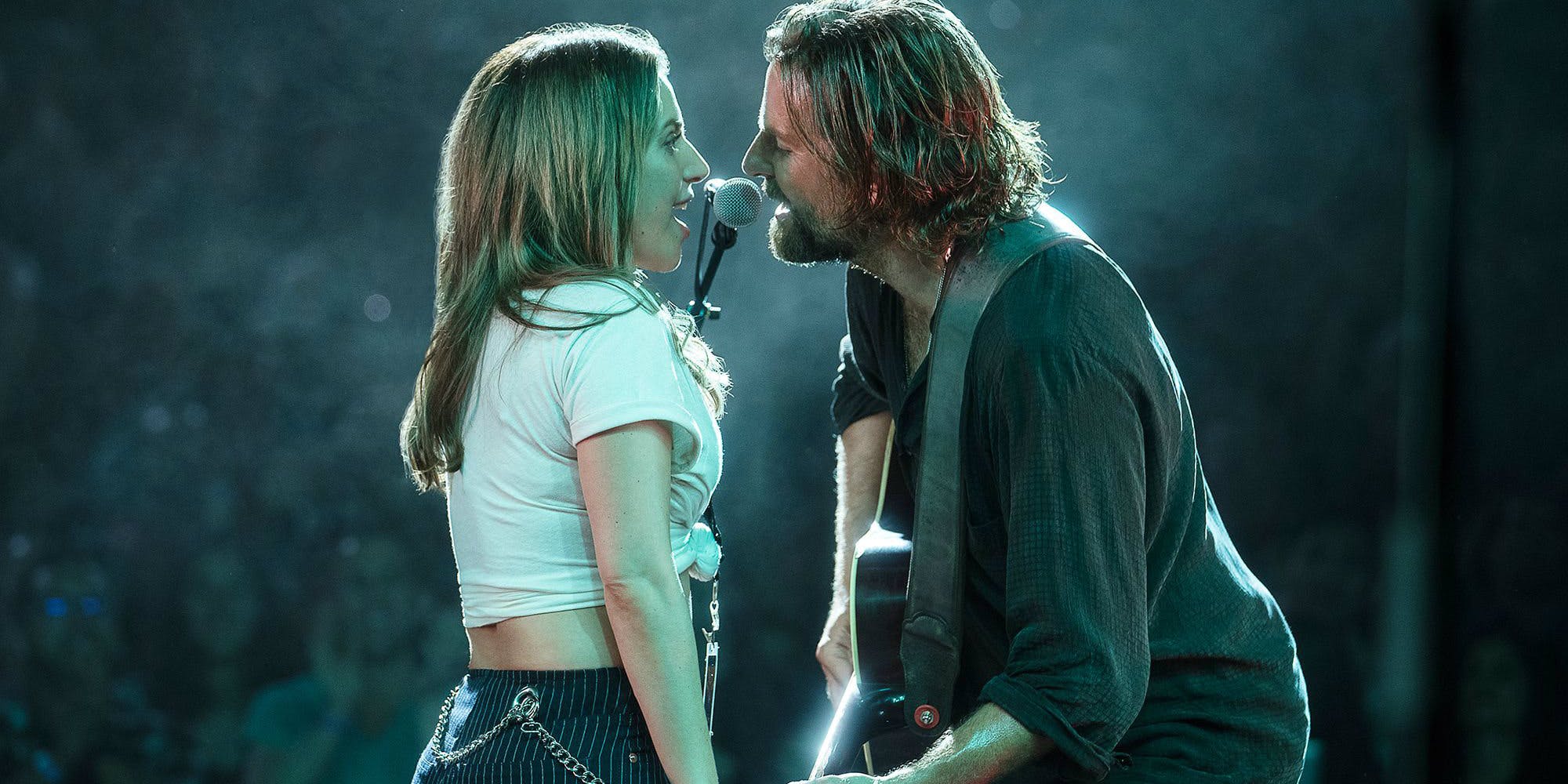 Don’t futz with a good formula. That’s the main thing the latest remake of the 1937 golden-era Hollywood melodrama A Star Is Born does spectacularly right. Whether you’re wedded to the original William Wellman production starring Janet Gaynor and Frederic March, or to the subsequent two versions from 1954 (starring Judy Garland and James Mason) and 1976 (starring Barbra Streisand and Kris Kristofferson), you’ll see that the bones of this tragic love story are unabashedly the same. And familiarity, in the case of Bradley Cooper’s A Star Is Born, shouldn’t breed contempt.

It starts, as it must, with a fateful meeting, here between Jackson Maine (Cooper), an adored but fading country rocker, and Ally (Lady Gaga), a waitress by day and singer by night whose star is on the rise. Jackson is an addict who uses booze and drugs to combat an ever-encroaching case of tinnitus. While searching for a pub, any pub at all, after one of his gigs, he stumbles into a drag bar where Ally is the sole female performer. She emerges on stage in full Edith Piaf finery, crooning the signature tune, “La Vie en Rose,” of the singer many have referred to as the French equivalent of Judy Garland.

Already it’s clear that Cooper, who also co-wrote and directed, understands and respects the source texts and the often queer sensibilities from which his take on the story stems. But the fealty can only go so far. The filmmaker also needs to create a believable milieu that’s appropriate for the current era, as well as conjure a palpable chemistry between himself and his leading lady.

To those ends, there’s more success on the latter than the former. This Star Is Born doesn’t have anything especially interesting to say about the current state of the music industry, though an effort is certainly made with all the large-scale performances shot at Coachella, a trip behind the scenes at an Alec Baldwin-hosted episode of SNL, and the tensions that naturally arise between Jackson’s down-home music sensibility and Ally’s poppier style. On the level of (bad) romance, however, Cooper’s film most certainly excels.

Jackson shuffles around like a hirsute little boy lost and speaks in a mock-Sam Elliott drawl, which is appropriate since Elliott plays the character’s much older brother, Bobby, and the siblings’ vocal similarities come to be an emotionally potent plot point. Jackson is a walking parody of virile masculinity, so having his and Ally’s crucial meet-cute take place in a drag bar counteracts any domineering, male-oriented silliness that might occur. Machismo is just another pose in the film; everyone’s wearing what they believe to be their best face, though that doesn’t mean it actually is.

Regardless, when Jackson and Ally lock eyes for the first time—Gaga swoons backward on the bar and turns her gaze toward the camera, letting Cooper’s baby blues do the rest—it’s positively electric. Who knew that Will Tippin from Alias and Mother Monster had this much spark between them? From there it’s a smooth ride into increasingly rough waters. Jackson senses Ally has talent and slowly coaxes her out of her shell. Soon enough they’re co-performers. Then the bigwigs come calling, mainly in the form of a supercilious British music manager, Rez (Rafi Gavron). Jealousy, marriage, success, failure, public embarrassment, reconciliation, and tragedy soon follow. And Ally, of course, has to have one transcendent final moment in which she memorializes her tempestuous love for all of eternity before a giant assembly.

Elliott’s character sums up the film’s thematic thrust in a scene in which he talks about Jackson’s love of the 12-note octave. Once you get past one octave, Bobby says, the notes repeat. It’s each individual artist’s job to use those same notes in a different way. As a meta justification for the existence of yet another A Star Is Born, the observation is trite and shamelessly on the nose. But as delivered by Elliott, in his uniquely sage and world-weary tones, the platitude becomes profound. Cooper understands that a message is only as resonant as its messenger, so he surrounds himself with collaborators, old and new, who can sell even the hoariest cliché.

Cooper pays it forward by giving his former Alias castmates Greg Grunberg and Ron Rifkin small but pivotal roles as Jackson’s driver and his rehab doctor, respectively. Cooper also tasks the terrific cinematographer Matthew Libatique with creating a visual palette that proves to be very much in the vein of Darren Aronofsky’s The Wrestler (sticking close to the leads most of the time so that we get a sustained sense of celebrity lifestyle tunnel vision), though minus that film’s more masochistic tendencies. And he quite rightly and sensitively treats Gaga as a person first and an icon second, which allows her to open up in ways, both at the microphone and in the film’s more intimate dramatic moments, that are constantly raw and surprising. The aim is to jerk tears and, the more cynical among us might say, to win awards. But when an old saw is this well told, it proves hard to resist.