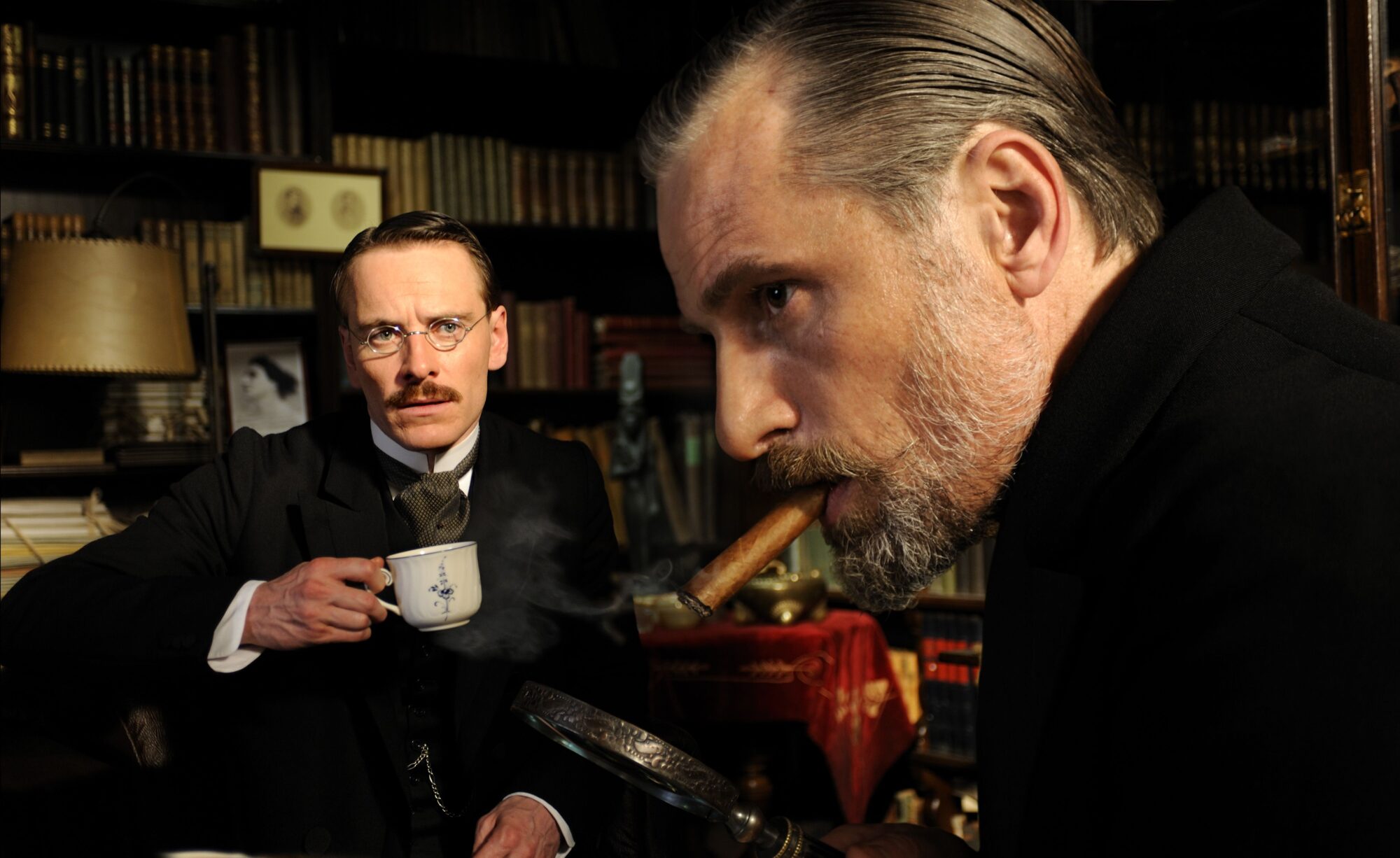 Repression runs rampant in A Dangerous Method, with sexual and romantic desires subsumed beneath societal and ethical constructs in a manner echoed by David Cronenberg’s expertly composed direction. For his tale of the intellectual relationship—and, later, battle—between Carl Jung (Michael Fassbender) and his idol/mentor Sigmund Freud (Viggo Mortensen), Cronenberg employs a cool, refined period-décor formalism, his camera movements as deliberate as his characters’ external appearances are polished and restrained, and yet his placement of figures within his frame—always slyly conveying their shifting dominator/subjugated dynamics—boast the same electric charge as his subjects’ roiling thoughts and passions. Despite its turn-of-the-century setting and visual/tonal modesty, however, Cronenberg’s focus remains, as always, on issues of mind/body invasion, corruption, and rebirth, which here revolves around Jung’s increasingly knotty relationship with patient Sabina Spielrein (Keira Knightley), who, over the course of the next decade, eventually takes Jung into her bed before finding herself inadvertently in the middle of his war with Freud.

In his story’s fixation on Jung’s eventual embrace of a more carnally liberated view of psychotherapy, Cronenberg’s latest plays not unlike a Merchant Ivory-ish version of Rabid, another film intimately concerned with abandoning conventional reason in favor of a new psychosexual paradigm. Constraining its characters aesthetically just as they constrain themselves cerebrally and erotically, A Dangerous Method (adapted from Christopher Hampton’s 2002 play The Talking Cure, which was based on John Kerr’s 1993 book A Most Dangerous Method) begins with Sabina’s arrival in 1904 at Jung’s Zurich clinic, screaming and flailing and jutting her jaw out with spittle-flying ferocity that borders on the cartoonish. Sabina’s physical contortions are, as Jung discovers, the byproduct of abuse by her father that revolved around spanking (which excited her), thereby placing her neatly within the confines of Freud’s everything-is-sexual-in-nature theories, but Knightley’s facial spasms and bodily contortions don’t quite sell this idea; the actress, while wholly committed, pushes too hard into mannered-gyration territory, thereby reducing Sabina to something of a caricatured freak show.

Knightley’s unconvincing early performance is all the more glaring given that Cronenberg’s stewardship and Fassbender’s performance are so patient and collected. Yet as Jung’s efforts to cure Sabina through Freud’s “talking cure” begin to pay dividends and her seizures subside, the film becomes more even-keeled, and able to concentrate less on show-offy histrionics than on Jung’s transformation, which is initiated through his efforts to treat Dr. Otto Gross (Vincent Cassel), whose belief in polygamy as a vehicle for true “freedom” increasingly speaks to Jung’s detachment from his loyal wife, Emma (Sarah Gadon), and his eagerness to lie with Sabina. As Jung falls headfirst into a relationship with Sabina, he also strikes up a personal relationship with Freud, here conceived of as a somewhat menacing father figure to Jung (his figurative son/apprentice), whom he scolds for wanting to push the nascent field of psychotherapy into more supernatural, mystical realms.

That dichotomy between pure science-versus-superstition is encapsulated by a dryly witty scene between the two men involving a wood bookshelf making a cracking noise, with Cronenberg exhibiting an understated drollness that helps lend levity to what is otherwise a rather static affair dramatized through calm conversations and written letters. In a certain vital sense, Jung, Freud, and Sabina’s affairs revolve around notions of patriarchy and efforts to liberate one’s self from it, be it Sabina from societal expectations (unlike housewife Emma, who’s despondent at not giving Jung a baby boy, Sabina relishes having a daughter and, also, a psychotherapist career) or Jung from Freud’s domineering shadow. Yet as rigorous and stimulating as its thematic inquiries are, A Dangerous Method ultimately rests as much on its performances, and in that regard, it succeeds far more than it fails, with Fassbender giving pensive, profound depth to the impressionable Jung’s conflict with himself and Freud, and a prosthetic nose-adorned Mortensen exuding imperious intimidation as Freud. They capture their historic figures’ relatable humanity and larger-than-life brilliance with subtlety and grace, and ultimately do much to offset Knightley’s early wild-eyed, overbiting mannerisms.