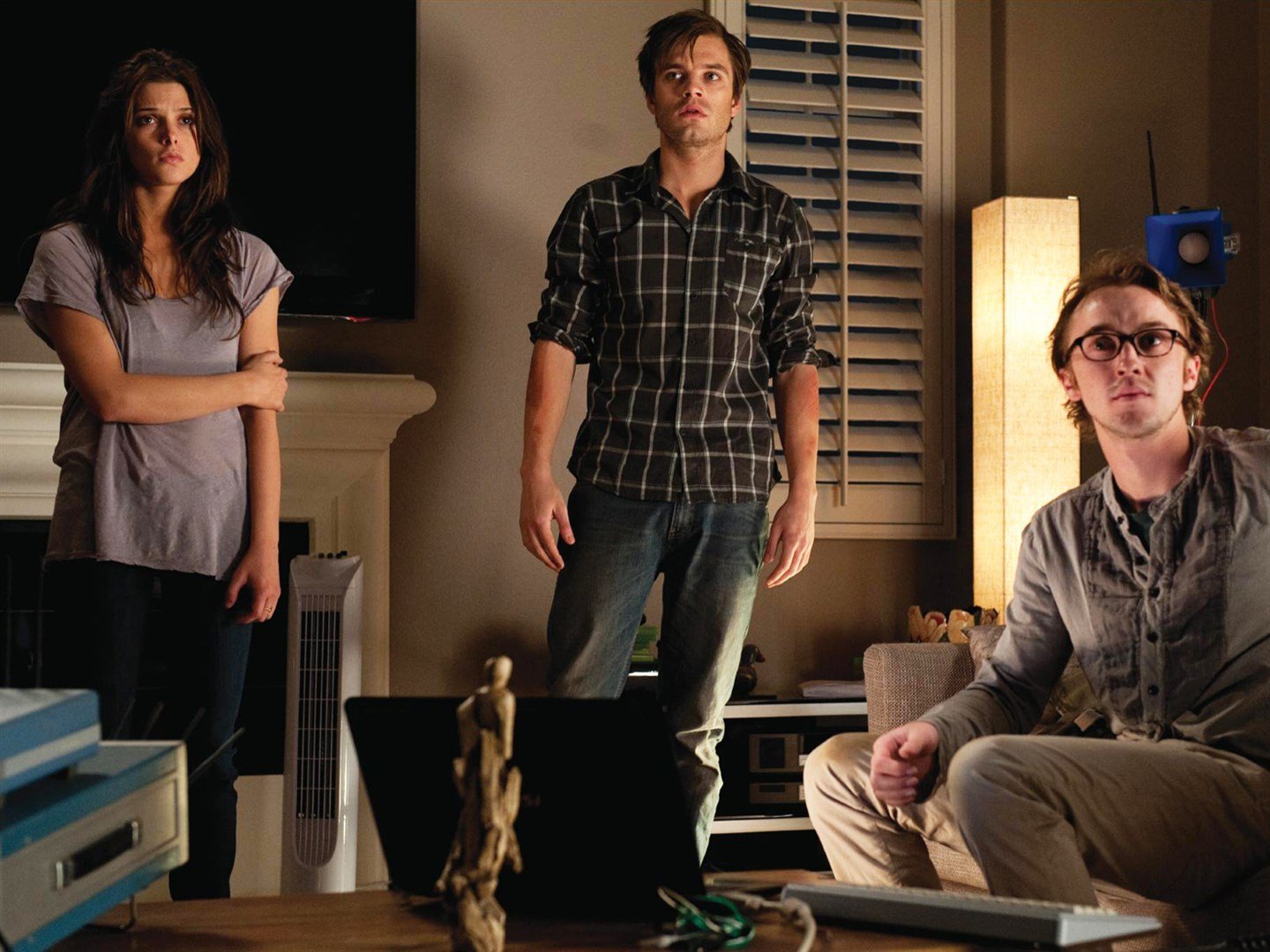 This weekend, your antidote to R-Pattz/K-Stew gossip is the sure-to-be throwaway ghost flick The Apparition, starring the crumbling couple’s Twilight co-star, Ashley Greene. Serving as Greene’s first star vehicle, the new thriller tells of a haunting presence derived from a shady parapsychology experiment, and sees a young woman (Greene) and her hunk husband (Sebastian Stan) scream their guts out before, naturally, calling in an expert (played by Lucius Malfoy himself, Tom Felton). There are plenty of memorable movie specters who’ve preceded Greene’s floorboard-creaking houseguest, and they’ll still be planted in viewers’ minds long after The Apparition dissolves into oblivion. Who to expect on this week’s list? Let’s just say that Carmen Maura, Jennifer Jones, and Bill Cosby have more in common than you might have thought. 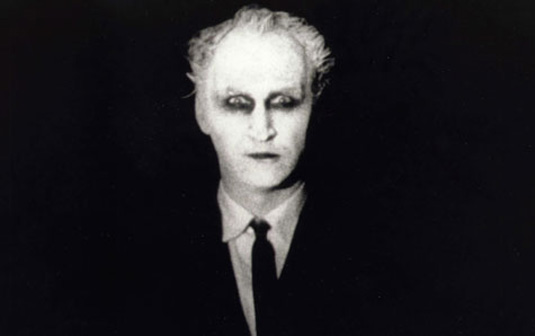 A surprisingly atmospheric and influential cult classic (David Lynch and George A. Romero are among its fans), Carnival of Souls is truly brought to life by its quadruple-threat creator, Herk Harvey, who wrote, produced, directed, and also stars as The Man, a pasty, highly eerie figure who appears to Candace Hilligoss’s mysterious crash survivor, Mary. Showing up everywhere from a park to outside Mary’s car window, The Man appropriately looks like death incarnate, for there’s more to Mary than meets the fearfully half-covered eye. 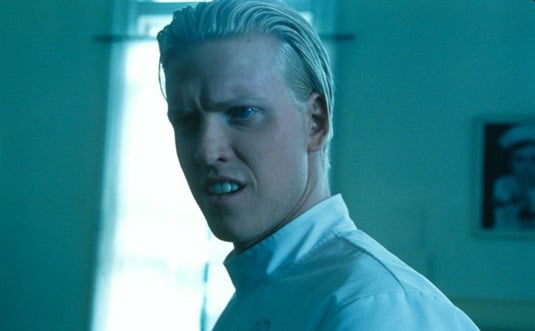 Back when Peter Jackson was still a small-name director tackling unabashed genre projects, he gave us The Frighteners, a neat little horror-comedy lark that’s ably scary and funny in bursts. The film’s key baddie, played by Jake Busey with his inherited chompers fearsomely gleaming, is Johnny Bartlett, a slain mass murderer equally dangerous in death. Having come back from hell to claim souls, Bartlett wants protagonist Frank Bannister’s (Michael J. Fox) most of all, and he’s got psycho backup from the twisted lover (Dee Wallace) he left behind. 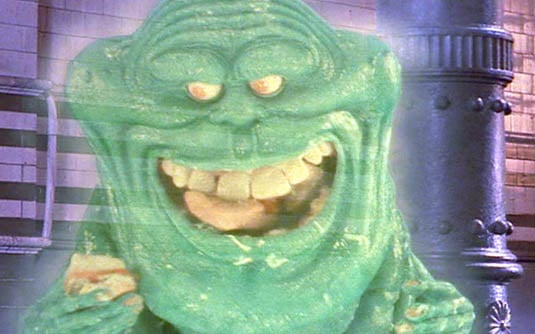 An early take on modern visual effects, the green, iconic ghost Slimer makes an introductory appearance in Ivan Reitman’s Ghostbusters, which gave way to the animated series that would boost the gooey character’s onscreen profile. The Real Ghostbusters, as the show was called, focused more on Slimer as the titular team’s mascot, as opposed to simply a comical menace. Slimer soon became the brand’s most popular asset, even spawning what may have been the most consumed juice box flavor of the 1990s, Ecto-Cooler. 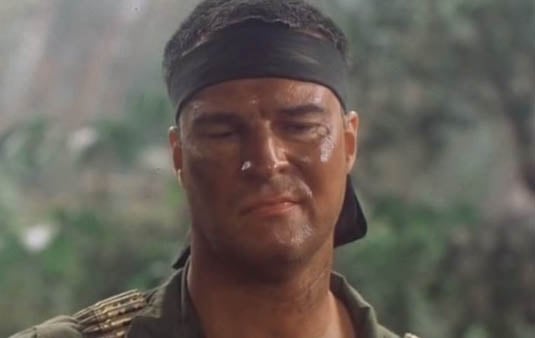 Another comedy-horror flick from the mid-1980s, Steve Miner’s House follows troubled novelist Roger (William Katt) as he struggles to write his latest book and moves into his late aunt’s home, which, among other things, inspires nightmares of Roger’s fallen Vietnam comrade, Big Ben (Richard Moll). Surely best known for his work on Night Court, Moll makes a memorable appearance near the close of the film, his half-decomposed corpse confronting Roger as the author escapes a portal-accessed underworld. The pair’s encounter constitutes the film’s climax, where an old mistake will either destroy or liberate Roger for good. 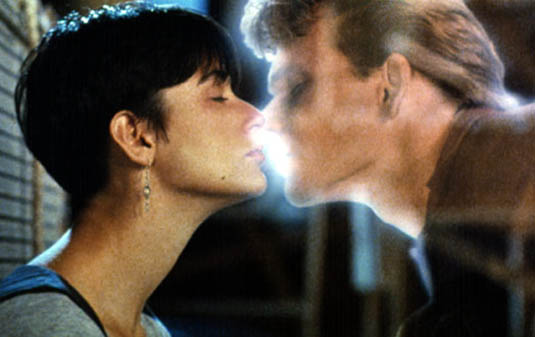 When Patrick Swayze succumbed to pancreatic cancer in 2009, the clip that replayed on news stations and in the minds of fans everywhere was one kinky little pottery-making session, in which Swayze and Demi Moore get dirty in more ways than one. The scene is one of many iconic moments in Ghost, a tearjerking afterlife romance that gained a certain prescience when its leading man passed. Killed by a double-crossing friend, Swayze’s Sam Wheat has to master postmortem living in order to convince Molly (Moore) of the truth about his death and the power his enduring love (awww). You say you miss Swayze’s rugged smolder? Ditto! 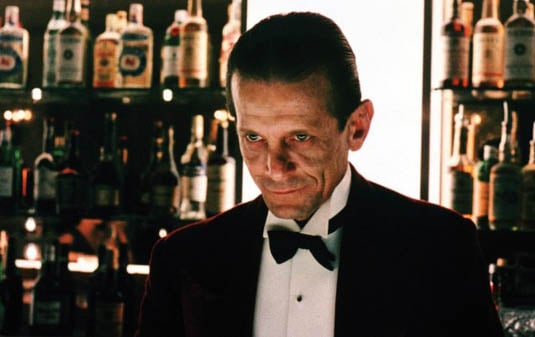 Odds are there are two types of Joe Turkel fans out there: those who love him for his bespectacled portrayal of Dr. Tyrell in Blade Runner, and those who cherish his turn as Lloyd the bartender in Kubrick’s The Shining. In the latter, Turkel wears a wonderfully creepy grin as he serves Jack Nicholson’s Jack Torrance a friendly amount of scotch. Unfolding in the Overlook Hotel’s Gold Room, the exchange, of course, isn’t really happening, but ghoulish Lloyd nevertheless listens to Jack’s marital troubles—and helps to encourage the madness that ensues. 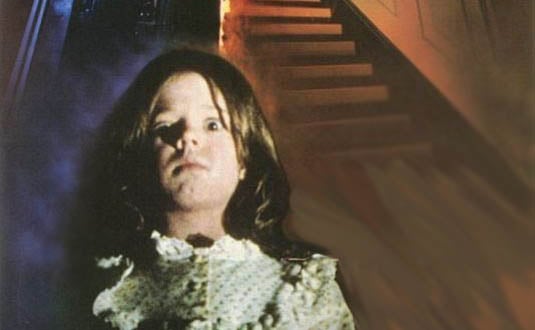 This convoluted Canadian import stars George C. Scott as John Russell, a new York City composer who moves all the way to Washington state when his wife and daughter perish in a car crash. In Seattle, John’s Victorian-era digs turn out to be haunted by the ghost of Joseph Carmichael, a murdered child whose death by drowning was perpetrated by a U.S. senator posing to be the heir of the boy’s wealthy family. But wait, there’s more: discovering that no inheritance would come in the event of the boy’s death, the senator produces an orphan doppelganger that he tucks away in treatment, and the real boy’s ghost haunts John to sort the whole mess out. And you thought Angelina Jolie’s Changeling was a handful. 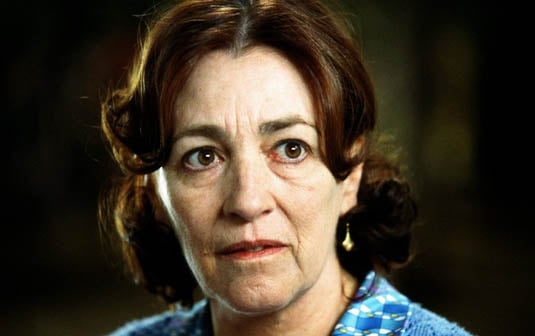 It’s thanks in large part to Carmen Maura that the six head ladies in Almodóvar’s Volver won a collective Best Actress prize at Cannes 2006. The embodiment of the meaning of the title (“volver” translates as “return”), Maura plays the presumed ghost of Irene, who’s come back to Earth to reconcile matters with her daughters Soledad (Lola Dueñas) and Raimunda (Penélope Cruz). But what’s the whole truth? Almodóvar spins a characteristic whale of a melodramatic story as he slowly unfurls Irene’s true nature and intentions. Maura, meanwhile, delightfully reminds us of the enduring luminosity of her director’s muses. 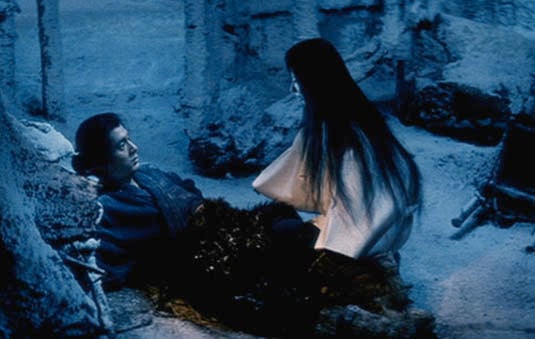 A quartet of ghost stories based on traditional Japanese folklore, Masaki Kobayashi’s Kwaidan is filled with many memorable ghoulish images, including the revelation in the “Black Hair” segment, wherein a husband discovers his ex-wife is no more than a skull, hair, and clothes. But some of the most striking shots come in the “Woman of the Snow” portion, adapted from the classic tale of Yoki-Anna. Played here by the ethereal Keiko Kishi, the Japanese legend is said to appear on snowy nights, her beauty juxtaposed by her terrifying gifts, and her hovering abilities matched by a tendency to vanish into mist. Oh yes, and she breathes white smoke. 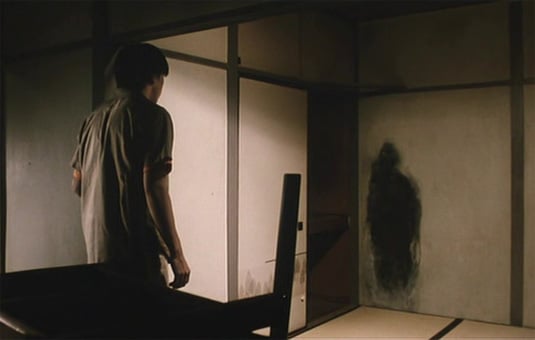 No, it’s not the 2006 U.S. remake that starred a post-Veronica Mars, pre-Dax Shepard Kristen Bell. This J-Horror original, initially released as Kairo, came from celebrated fright auteur Kiyoshi Kurosawa, and made a powerful, chilling impact as a commentary on the alienating trends of modern technology. The film kicks off with the unexplainable suicide of a computer user, whose friends discover both a ghostly face peering out from one of his monitors, and spectral black images on the wall near his suicide site. Plenty more ghosts soon appear in Kurosawa’s film, about loneliness in a world filled with people. 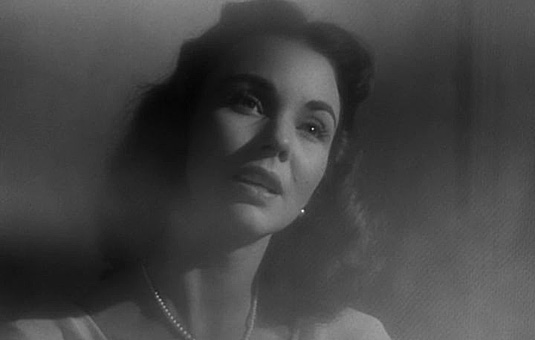 Jennifer Jones in Portrait of Jennie (1948)

A romantic rendering of Robert Nathan’s fantasy novel, William Dieterle’s Portrait of Jennie was developed by its director as a star vehicle for Jennifer Jones, who’d recently won an Oscar for The Song of Bernadette. Jones plays the lovely subject of the title, a young woman seeming to be of another time, and who presents New York painter Eben Adams (Jospeh Cotten) with life changes as spiritual as they are creatively enlightening. Producer David O. Selznick insisted on shooting Eben and Jennie’s supernatural encounters outside of studios and in real New York and Massachusetts locales, drastically hiking up the movie’s budget. It paid off. 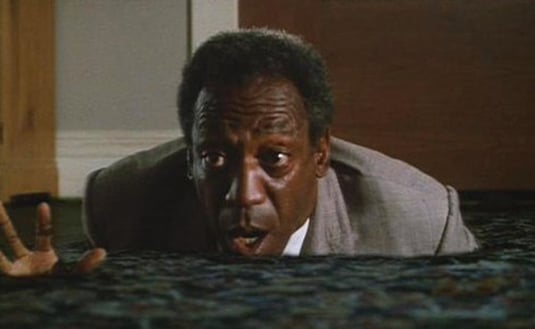 Many probably know of Ghost Dad, that panned, early-‘90s comedy about a workaholic widower (Bill Cosby) who posthumously connects with his oft-neglected kids. What many likely forget is that the film was helmed by Sidney Poitier, becoming an infamous low point in the respected vet’s career, and winding up on a whole lot of “worst-of” lists. It remains amiable Saturday-afternoon viewing, with Cosby engaged in various invisibility stunts, his character’s death the result of a cab ride gone very, very awry. 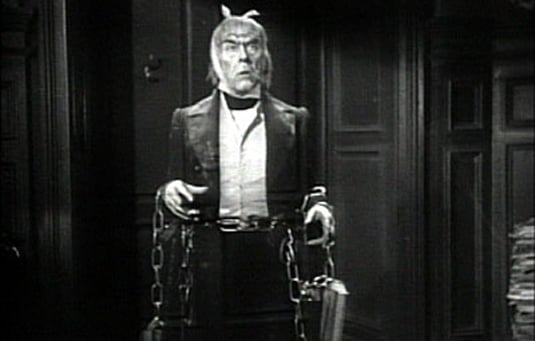 Jacob Marley’s getup would make a mean Halloween costume, provided you were willing to lug around dozens of pounds of books and chains all night. Though not one of the big three, Marley is the first ghost to visit Scrooge that fateful Christmas Eve, and Leo G. Caroll’s portrayal set the precedent for many Marley performances to follow. Bound up like a walking condemned library, Caroll’s ghoul warns his old partner of the other specters to come, and the fate that awaits him if he doesn’t wise up and give the whole penny-pinching miser thing a rest. 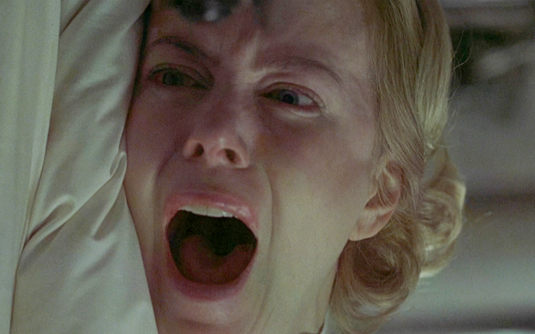 Nicole Kidman, Alikina Mann, and James Bentley in The Others (2001)

“This house is ours!” hollers upright Grace (Nicole Kidman) and her heavily-homeschooled rugrats (Alikina Mann and James Bentley), who just had the displeasure of learning that, yep, they’re dead. It’s a pull of the rug you really don’t see coming in Alejandro Amenábar’s atmospheric, existential gem of a thriller, which uses the trick that the so-called “others” in Grace’s echoey manse are the unwanted, netherworldly guests, and not vice-versa. A watch-it-again twist flick actually worth watching again, The Others sees do-gooder Grace undergo the ultimate terrifying transition. 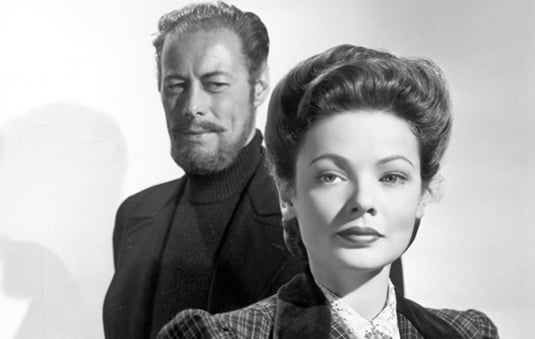 Rex Harrison makes whispy, yet dashing, entrances and exits as the titular spirit in The Ghost and Mrs. Muir, a charming, decades-spanning romance that sees Gene Tierney’s Lucy fall for Harrison’s deceased sea captain Daniel Gregg. The rare benevolent ghost on this list, Daniel remains visible only to Lucy (protecting her daughter Anna from fear), and even leaves when Lucy heeds his advice and engages in an (ill-fated) romance. But the star-crossed pair do ultimately reunite, as Gregg greets Lucy on her death bed and takes her weightless hand, when soul leaves body.