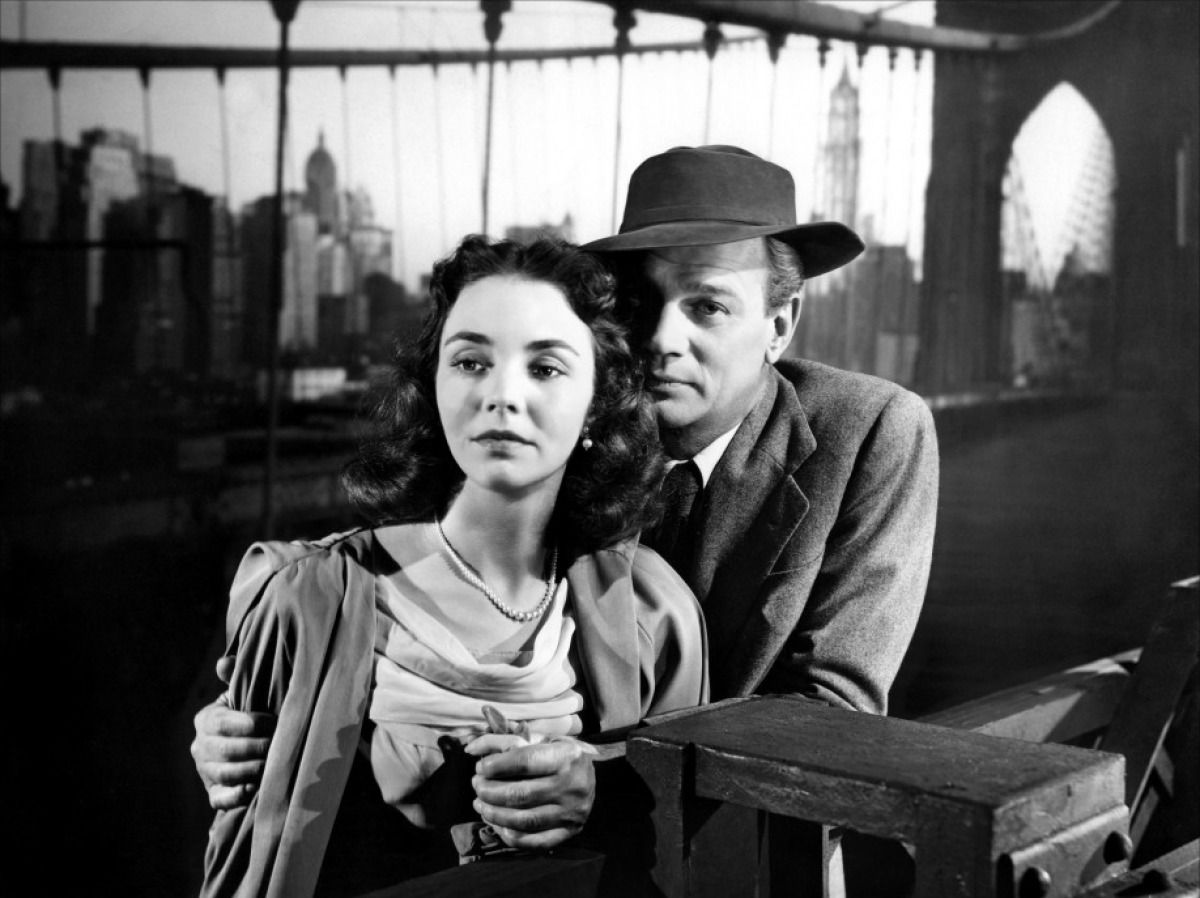 Salman Rushdie’s Orphic-inspired novel of love and death The Ground Beneath Her Feet is told through the eyes of a photographer inextricably bound to two lovers. Rushdie’s art-loving hero is particularly fond of 1953’s Ugetsu Monogatari, Kenji Mizoguchi’s imperial ghost tale ripe with autoerotic disruptions. Rushdie’s analysis of the Mizoguchi classic is particularly interesting because he targets the self-serving nature of Genjurô’s relationship to the film’s ghost, the Lady Wakasa. William Dieterle’s 1948 masterpiece Portrait of Jennie also supports this idea. Like the impoverished Genjuro, Eben Adams (Joseph Cotton) isn’t so much avaricious as he is lacking in self-worth, and his relationship to the eponymous Jennie is seemingly summoned by his need to transcend the desperation of his loneliness and poverty.

A struggling and disillusioned painter, Eben lives penny-to-penny in a New York City apartment he can’t really afford. He walks into an art gallery supervised by Miss Spinney (Ethel Barrymore), a wise older woman who’s instantly drawn to Eben’s emotional plight, and she does more for the young man than most gallery owners ever would. A mere compliment provokes a spurt of creativity and seemingly ushers in his spiritual awakening. Walking through Central Park, he comes across a playful young girl, Jennie (Jennifer Jones), who happily tells Eben of her many relationships with friends and family. She leaves a scarf behind, tucked inside a newspaper mysteriously dated from the early 1910s, the first of many clues that she may not be of this world. Eben, though, ignores this ghostly evidence, using it instead as a means to stir his creative process.

Portrait of Jennie is a haunting evocation of one man’s pained artistic process, and the genius of the film is how Dieterle delicately equates the creative impulse to an ever-evolving spiritual crisis. (Is it any coincidence then that the film was a favorite of atheist auteur Luis Buñuel?) Once Eben learns to channel his artistic spirit via his paintbrush, he realizes he can only draw if Jennie pays him a visit beforehand. He walks through the park and sleeps on the park bench where he met the girl, hoping that his muse will appear and inspire yet another creative catharsis. Eben’s relationship to Jennie becomes an addiction of sorts and, therefore, an obstacle he must conquer. This is all part of Dieterle’s god-like master plan: Eben is repeatedly tested until he can create without the temptation that Jenny comes to represent.

Dieterle establishes a difficult duality between art and life. How does Eben channel Jennie into the reality of his paintings without loosing himself to her ghost? Jennie is seemingly conscious of her not-being but even when Eben goes to visit the locale where Jennie supposedly met her doom, he still refuses to believe that she is not of his world. Not since Murnau’s Sunrise had a film so fascinatingly and tirelessly concerned itself with the nature of obsession as Portrait of Jennie. Eben is forced to acknowledge Jennie’s true identity by having him witness the recreation of her death. What is Jennie then but a metaphor for supreme creative (read: spiritual) enlightenment? A quick glance at Eben’s portrait of Jennie shows that he has yet to finish drawing her left arm. The shot evokes a devastating foreshadowing that isn’t lost on Eben. Indeed, he is very conscious of the fact that if he finishes the arm, Jennie will disappear soon after.

Dieterle forces Eben to experience Jennie’s death before he can transcend her memory. As such, the film is a unique testament and tribute to every artist who’s had to brave creative stasis. By film’s end, not only can Eben paint without visits from his muse but he also learns to appreciate the simple pleasures and joys of the world around him. Dieterle’s remarkable use of color compliments Eben’s spiritual evolvement. The once-dreary New York City milieu comes to life by film’s end. For added effect, Dieterle shoots the film’s final scenes in color, but perhaps most remarkable is the way his mise-en-scène and rigorously self-reflexive compositions bring to mind the malleable surface of a canvas. Dieterle’s stylistic choices also call attention to Eben himself as a work-in-progress. Not until the release of Abel Ferrara’s Driller Killer would another film pay such profound and careful attention to the creative process in such spiritual panic.

Review: In a Lonely Place