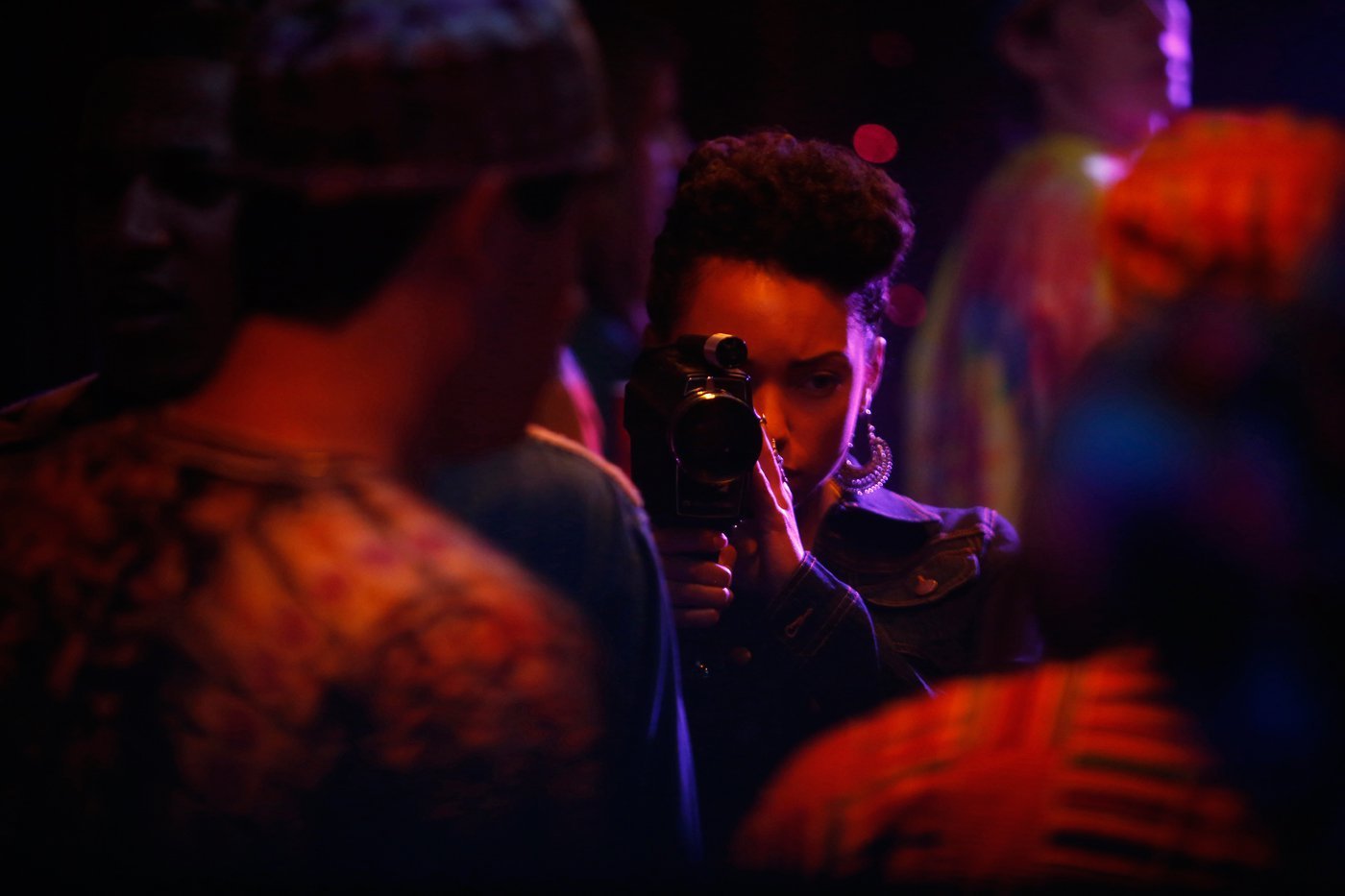 Since as early as Donald Trump’s election, it was natural to wonder just how quickly art would reflect the anxieties of the majority of Americans who disapprove of this historically unpopular president. On television, the response seemed immediate. The Trump Age gave The Handmaid’s Tale and The Americans additional gravitas and relevance, and Last Week Tonight with John Oliver became an indispensable salve. But the strongest statements of the past year have been intensely personal auteurist creations that now feel like declarations of anxiety and exasperation.

Better Things, Insecure, One Mississippi, and Broad City are related only as idiosyncratic realizations of the personalities of their female creators. They’re unmistakable products of singular sensibilities which have allowed us to inhabit perspectives made vital by their newness. And alongside concept-driven series like GLOW and The Girlfriend Experience, they constitute a new preponderance of female characters and perspectives on television. If our list reflects a pattern, it’s that, as a reckoning has reached powerful men in many professions, women are now the vanguard of the crowded TV landscape.

Aziz Ansari’s Master of None reached a poignant height with “Thanksgiving,” an episode about a young black lesbian wrestling with her family’s repressive, conservative values. That Emmy-winning episode was, notably, co-penned by Lena Waithe, reflecting the emergence of female voices even in shows from well-established men. The Deuce is another trenchant urban polemic from David Simon but one focusing on female sex workers in New York, and co-written by women (a first for Simon). The Good Place, Michael Schur’s fantastical rendering of the afterlife, is notable not only for its diverse cast, but for Kristen Bell’s leading role as Eleanor, a character alternately narcissistic and vulnerable, and like no other woman on TV.

Of course, the year also provided a slate of pedigreed shows from male creators—among them the return of David Lynch’s beloved Twin Peaks and the debut of David Fincher’s serial-killer series Mindhunter. And while the final season of Damon Lindelof and Tom Perrotta’s The Leftovers cemented that series as a niche classic for HBO, dour shows focused on difficult men that aspire to the label of prestige now feel like an exception instead of the rule. This was the year of wrestlers, activists, murderers, immoral angels, single parents, estranged children, cancer survivors, and handmaids—all of them women. We can stop waiting for powerful voices of resistance to emerge, because they’re already telling their stories. Michael Haigis 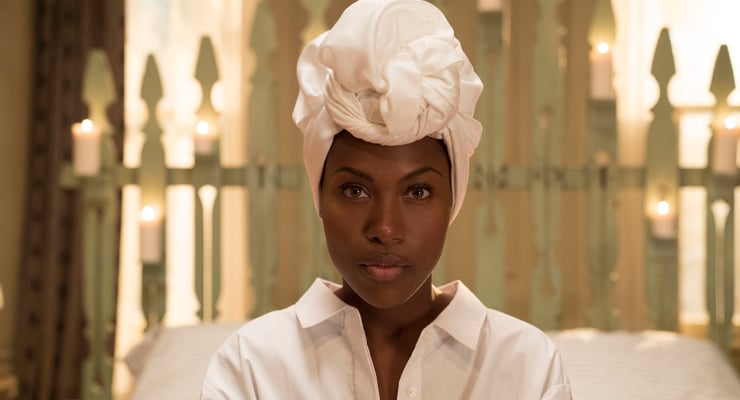 There’s a sense in Spike Lee’s filmography of a scolding intellectual seeking to outrun his demons with the cathartic power of style. As with many recent Lee productions, Netflix’s She’s Gotta Have It is so formally exhilarating that the sensorial often overrides the textural. Updating the adventures of Nola Darling (DeWanda Wise) for woke millennials, the series is awash in bursts of expressionist color, on-screen text, the breaking of the fourth wall, and riffs that allow Lee to revel in the actors’ chemistry and in the intuitive power of his own imagination, leading to tones that daringly crash into one another as satire, agitprop, and melodrama merge. Lee’s a preacher who can get down with the get down, and his simultaneous sense of control and of free-wheeling spontaneity suggests a weary common sense born of experience. It’s an experience that the filmmaker hadn’t yet attained when he made the original She’s Gotta Have It in 1986. Now, more than 30 years later, his sensibility offers hope for a country riven by ignorance and hatred. Chuck Bowen 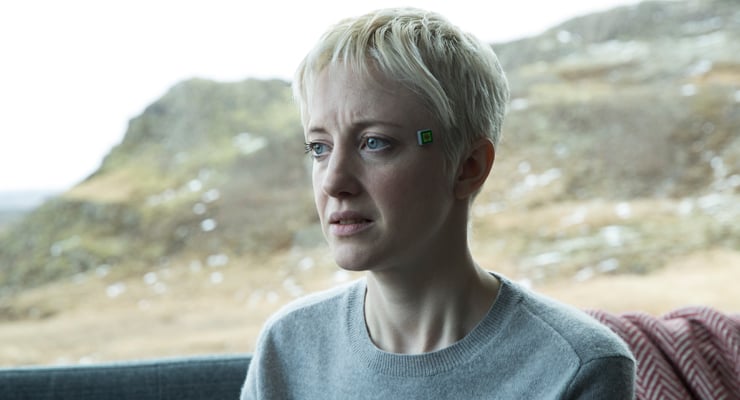 Much of the fourth season of Black Mirror employs a formula that the series has honed with devastating efficiency: Insidious tech is introduced, context is revealed, premises are flipped, and we’re left gobsmacked and terrified, retreating into our own heads. Yet while the series still stuns in moments of harrowing wit, Black Mirror has most improved on the estimable storytelling achievements of landmark past episodes such as “San Junipero” and “An Entire History of You” by rapidly building seamless worlds and developing character complexity without feeling rushed or cursory. The series is as gymnastic as ever, toggling genres between installments while maintaining its characteristic level of thoughtfulness and imagination, and occasionally even spurning the twist-ending tradition of its most beloved episodes. “Arkangel,” a melancholic episode about protective parenting, is more focused on relatable maternal folly than mind-bending paradigm shifts, and “Metalhead” is essentially a filmmaking exercise in tension with notably little of the sci-fi themes that have come to define the series. No matter. With its consistent mastery of genre, wit, and ruthless efficiency, Black Mirror has become a farm not just for penetrating commentary, but for truly moving storytelling. Haigis 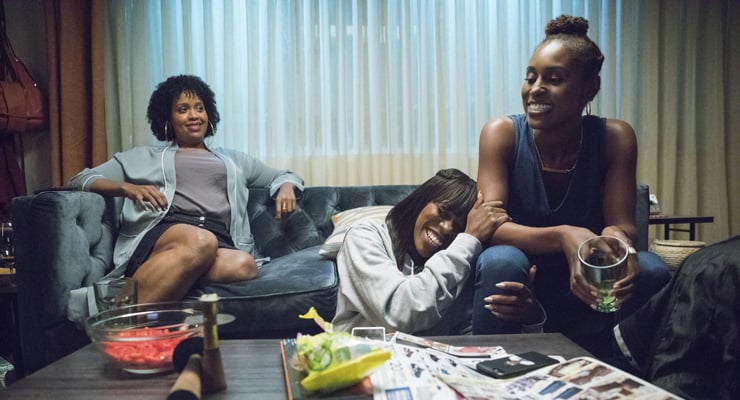 There’s always risk involved in making a TV show that tackles daily minutiae and not much else. Rather than focusing on a single romantic relationship or dramatic incident, Insecure is a series about an entire milieu, and its second season is all the better for it. The series continues to explore the romantic and professional lives of Issa (Issa Rae), Molly (Yvonne Orji), and Lawrence (Jay Ellis) with specificity and nuance while maintaining its characteristic observational humor. In this way, Insecure is as much an auteurist dramedy along the lines of Fleabag and Atlanta as it is an homage to black sitcoms like Girlfriends and Living Single. The crux of season two features our protagonists encountering the thorny world of casual dating, which incites as much laughter as it does frustration. Not much may happen on Insecure, per se, but it’s the sort of series that values watching women figure things out one step at a time, even if they’re not wholly empathetic or selfless along the way. Julia Selinger 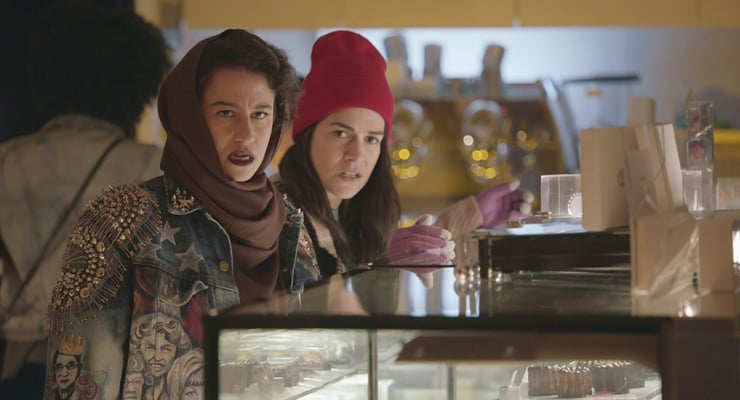 Broad City is still gut-busting, but there’s a sad undercurrent to its fourth season. One episode acknowledged that Ilana (Ilana Glazer), unbelievably, hasn’t come in four months, and in an uproarious centerpiece, the horndog speaks directly into her stubborn vulva and realizes that her inability to satisfy her libido is directly linked to every horrible thing that our commander in creep said about more than just women on the campaign trail. Elsewhere, Abbi (Abbi Jacobson), knowing that she needs a heater, chooses to spend money on a Botox injection because of how her first gray hair has made her insecure about everything she thinks she hasn’t accomplished. The season’s through line was very quickly understood to be Abbi and Ilana’s weaponizing of their bodies in response to what men force on them, or take away from them (it’s telling that “Witches” features a smash cut to a Trump Tower window cracking in response to the energy of an all-ladies party in the woods). And to the end, they remained comrades in arms, understanding that their kinship is crucial to fighting the good fight against any man, like the New York City Snipper from the impeccably structured “Sliding Doors,” who dares to make a woman feel like she has no identity beyond the sum of her parts. Ed Gonzalez 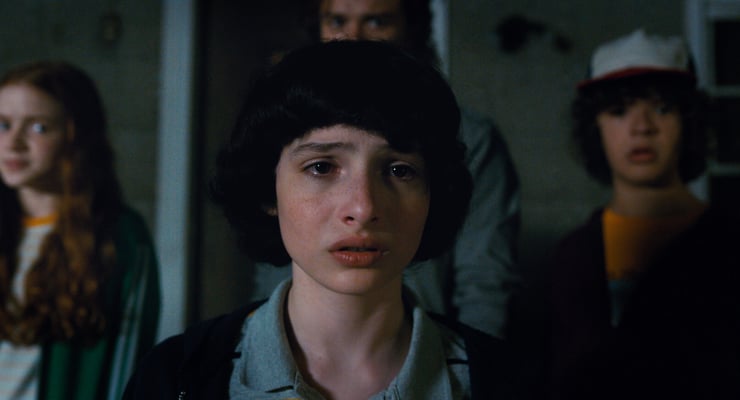 Jonathan Rosenbaum once described Luis Buñuel’s The Milky Way as coming “dangerously close to being all notations and no text.” The same could be said about the first season of Stranger Things, practically a rollcall of references to the Duffer brothers’ favorite pop-cultural artifacts. But in Stranger Things 2, the notations are more intricately intertwined with the text. In the season’s first episode, when Max (Sadie Sink) walks into class on her first day of school and takes her seat, Mike (Finn Wolfhard) and his three best buds all turn in unison to look at her—and Gary Paxton’s “Spooky Movies” drops on the soundtrack, to comically underline the point that the boys have been simultaneously haunted by a new crush. Later, when Max’s abusive older step-brother, Billy (Dacre Montgomery), arrives at school, the camera joins two female high schoolers in leering at his behind—a spectacle of tongue-in-cheek objectification that’s hell-bent on flipping the script on the representational politics of, say, a Whitesnake music video. And throughout the season, such cheekiness was perpetually in service of complementing the show’s still-obsessive and often haunting fixation on kinship and the after effects of trauma. Gonzalez