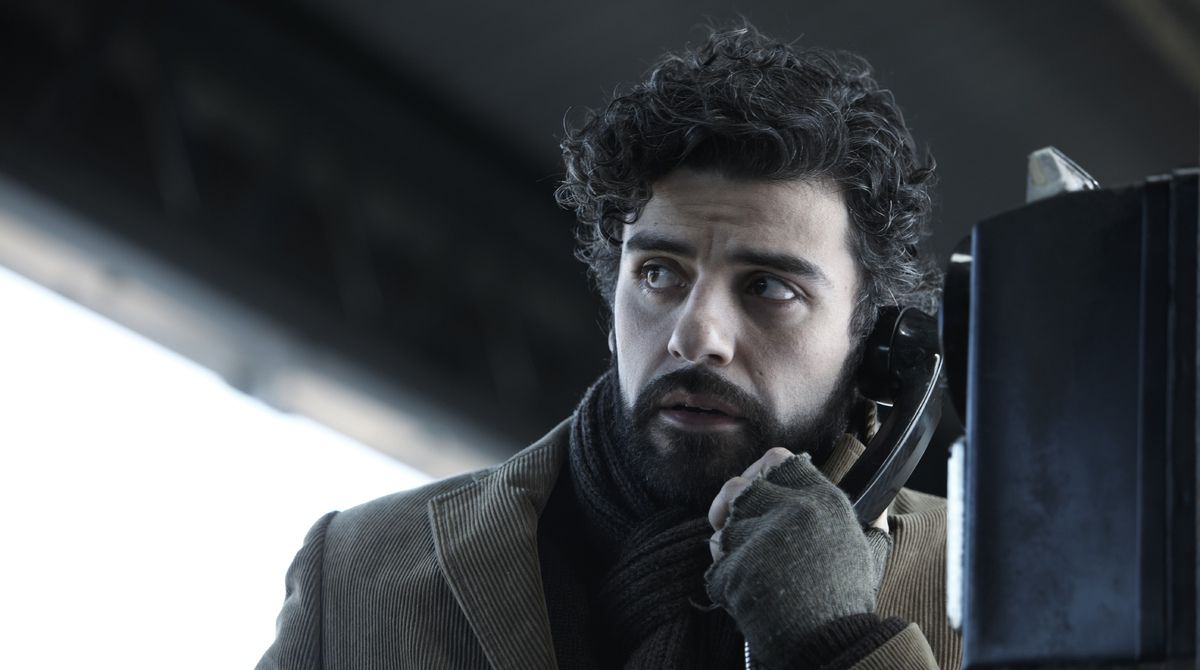 There’s a deeply soulful quality to Oscar Isaac. In films as disparate as Drive, W.E., and 10 Years, his lines seem infected by a certain deep-seated longing, an unexplained despair even. Isaac is a ruggedly masculine actor with an unmistakable star quality, who puts twice as much emphasis on his vulnerability as he does on his tough-guy affectations, and it isn’t hyperbole to say that he brings to mind James Dean. That quality defines Joel and Ethan Coen’s new film, Inside Llewyn Davis. The title character is abrasive and unlikable on the page, but Isaac turns him into a wounded creature, playing him as a man who croons because he finds it impossible to open himself up to people in any other way. The musical inclusions become more than just performances, as Isaac positions them as semi-regular emotional exorcisms. On the verge of his would-be mainstream breakout, the actor spoke to us about bringing those talents to a film that’s both inspired by real events and distinctly Coen-esque.

The film has obviously been influenced by a real scene, and the real people who populated it, but it also takes place in this universe that is unmistakably that of the Coens, with their banter and wit and everything-goes-wrong character arcs. How do you toe the line between real and fictional influences?

I think what they’re interested in isn’t necessarily what life looks like, but what it feels like. So there’s something impressionistic about it. Llewyn is a stranger in a strange land; the characters in their films often feel isolated and alienated from the rest of the world. So I never thought of it as…a heightened state. Yet the circumstances do make it heightened. And because it’s an exploration of existence, and of how existing can really suck sometimes, a lot of shit has to go wrong in a short period of time. It’s not a hyper-realistic thing, and it’s not cinéma vérité. And I actually remember asking them, “So, is this going to be, like, cinéma vérité?” And they go, “No. Definitely not that. That’s not what we do.”

A film I enjoyed.

I’m laughing because, yeah, that couldn’t have been a looser shoot. It’s like, they’d shuffle you from the bar over to the set, “time for a take,” then bring you back over to the bar. And I watch that movie and I think we captured a bit of that energy on screen. With the Coens, though, it’s actually not like a painting. I think, with great directors like them, they don’t want you to feel like they’re dictating everything. They want to guide you on your way to the performance they need.

So it’s about confidence?

Confidence in their artistic decisions?

Yes. They storyboard, but they trust their own instincts. They may change their plan or their shot on the day of. It’s about their sensibilities.

Inside Llewyn Davis has a loose, almost plot-less vibe, but there seems to be a lot of camera setups, so the shooting must have been anything but loose.

The Coens don’t do a lot of takes, so it didn’t actually feel too grueling. We’d always end on time. It was actually the most efficient set I’d ever been on as well. There was very little room for chaos. The way to tell the difference between a very experienced director versus an inexperienced one is when shit goes wrong, because it always does. You just don’t really notice it with someone who knows what’s going on, because they’ll either roll with it or adjust very quickly without too much screaming and yelling about it. It was just incredibly relaxed, the whole environment. People were very happy to be there. Also, I remember Tony Gilroy doing this a lot: They’re really good at including everybody. In conversations, or just by the simple fact that they print out the storyboards every morning for everyone to see as well. There’re a lot of directors that will have secret conversations with the DP in the corner, leaving everyone feeling as if they’re not on the same page. That happens when there’s insecurity.

Well, I mention it because I feel like there can’t be many things harder to record for a feature film than live singing.

Well, usually. The playback and all of that is what makes it really complicated. But the fact that we were able to do it without really needing anything—nothing in my ear, no lip syncing, no trying to match anything—and the fact that I was able to stick to the tempo at all times without any of that stuff meant that we could just film it like a dialogue scene.

I had to go and audition for the casting director and then she told me to record “Hang Me,” which was a part of the criteria of the audition. Everyone had to do a version of “Hang Me.” So, I went home and did 30 takes of it to find out which one I liked the best, and I found the best one and sent that. What I lack in talent I make up for in obsessiveness. The Coens saw that, and they showed it to T-Bone, and then they brought me in for a second audition. Then I got the role.

You’re pretty well dug into the independent scene. You’ve also been doing these movies like this and Drive that are kind of on the borderline between studio and independent. Could you talk about the state of the industry, considering how hard it is to make mid-level movies, and that you’re in so many of them?

It’s hard to get movies made the way that people want to make them, because fear drives so much of it. And the reason that fear drives so much of it is because money drives so much of it. And money and fear are completely intertwined. Working on a film with the Coens, though, there’s just zero fear. There’s no reason for them…they haven’t been burned. Sure, they’ve had slightly more difficult situations than others, but they’ve always done things the way they wanted to do it, and they’ve had the good fortune of being able to nourish their genius. I don’t use that term lightly, as I think they’re geniuses, and lucky geniuses.

Have you given any thought to live performances beyond the film?

We’ve done a few. We’re going to be doing one soon in Los Angeles as well. I’ve been playing live for a long time though. The last two years even, before starting this, I was playing at a lot of coffee shops all over the place. There was a lot of solo stuff, as I’ve been writing music for the last 20 years, but I also did stuff with a band. I’m definitely interested in that, and I have been for a long time, but it is difficult with the schedule. There’s a lot of stuff that I still want to personally do in the pictures. And for me, it’s more about asking, “Do I have a repertoire of songs that I feel I want to share with people?” I think the first step would be, get into a studio, start recording, and see what happens.

How difficult is it doing a period piece in terms of words that you have to say or the way that you carry yourself? Is it difficult as an actor, or—working with the Coens, who’ve done period pieces before—is it the same old job?

I don’t know if it’s easier, but there’s something there that’s an easy thing to go to. I always try to make a vastly different character, and get very specific with their rhythm of speech, and how they talk. When you have a particular period, you know where to go. “Okay. Late ‘50s. Early ‘60s. What’s that like? What’s that sound like?” Sometimes, when it’s a film that’s set now, it’s a little bit harder to have perspective, and you ask yourself, “Well, where do I even start?”

So, in some ways, it allows you to get extra specific, but you just treat it like anything else. The only things that I think I specifically thought about as “period” were speech and generosity of tone, because I think the modern way of speaking in the United States is generally from the back of the throat. You don’t move your lips very much, because everyone’s so guarded nowadays. Back then, there was much more generosity.

Like when you watch Marlon Brando. For some reason [drops voice low] everyone thinks Marlon Brando was back here, [his voice pops up] but actually he was talking all the way out here. He was very generous with his air, and his melody. There was much more melody back then. Sometimes, I think it’s an overpopulation thing that caused this. That’s why people say “like” so much, nobody wants to say anything definitively. Now that it can be fact-checked right away.

How do you view Llewyn Davis as a person?

I think he’s probably a very generous, kind, and happy-go-lucky guy—just not this week. I think that, in this movie, you’re just catching Llewyn in a really bad week. He’s struggling, and he’s having an existential crisis where he doesn’t know why he’s doing what he’s doing anymore, and the thing that he’s doing is causing him so much pain that he’s trying to figure out if he should keep going or quit. And even when he wants to quit, something drags him back in. He’s a hamster on a wheel.