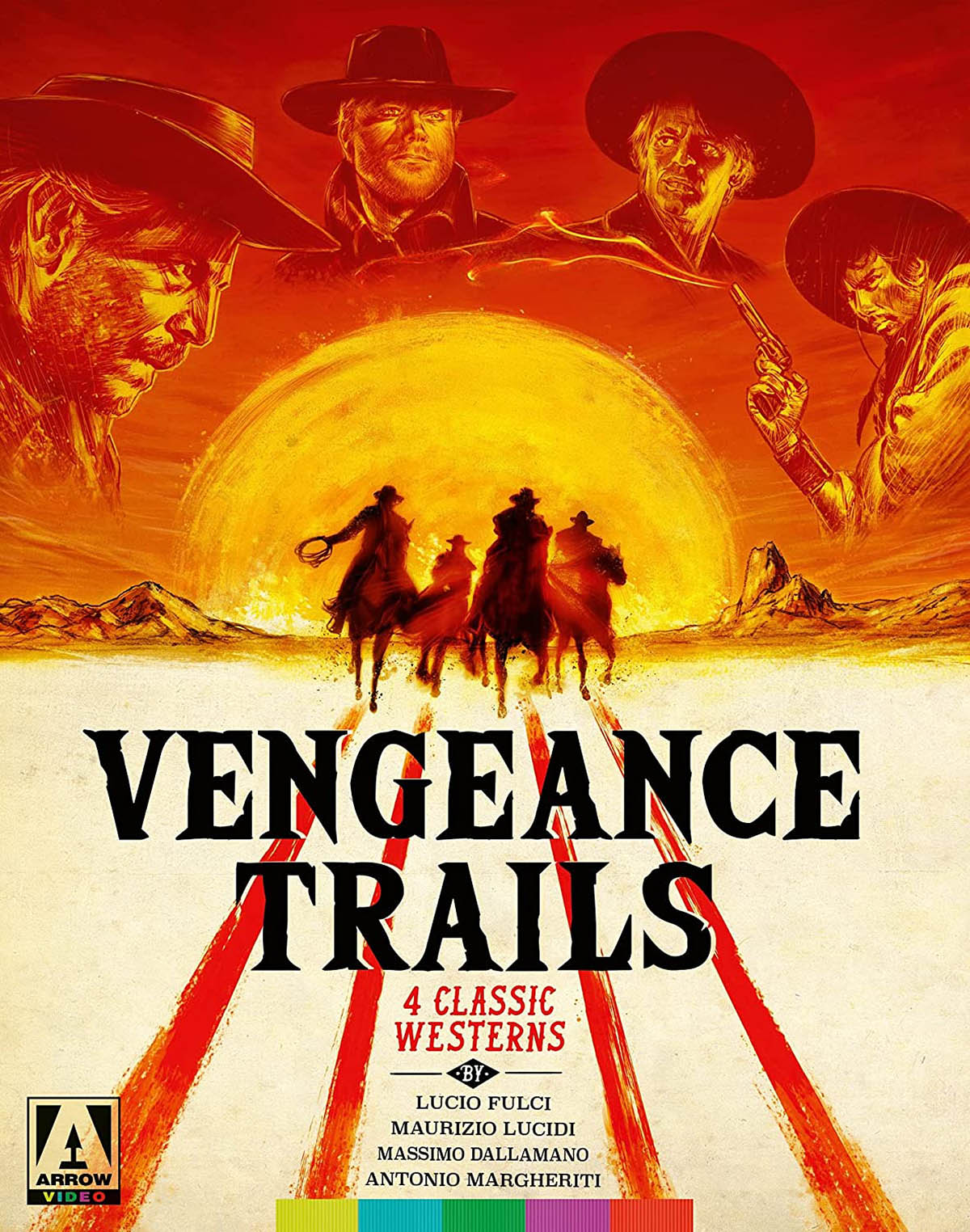 One of the most profitable and fascinating B-movie movements to emerge in the 1960s, the spaghetti western saw Italy’s filmmakers taking iconic cowboy tropes for a ride. After the runaway success of Sergio Leone’s Dollars trilogy, many journeyman filmmakers worth their salt left swords, sandals, and comic happenstance behind for the world of spurs and stallions, bringing a uniquely European edge to the most American of film genres. From the mid ‘60s to the early ‘80s, spaghetti westerns reignited interest in six shooters with their makeshift Southwestern settings, moral gray zones, and leftist political leanings—all elements that set them apart from the often stuffy, unambiguous, law-and-order-above-all-else attitude of American westerns in their heyday.

Arrow Video’s latest box set assembles a quartet of lesser-known Italian westerns united around the most archetypal of themes: revenge. More unusually, these westerns were made by directors who are better known for their work in other genres, from the giallo to the poliziottesco: Lucio Fulci, Maurizio Lucidi, Massimo Dallamano, and Antonio Margheriti.

Fresh from his star-making turn as the eponymous black-clothed gunslinger in Sergio Corbucci’s Django, Franco Nero stars in Fulci’s Massacre Time, from 1966, as Tom Corbett, a gold prospector who receives a mysterious summons to return to his hometown. Discovering that his birthplace has been taken over by a wealthy business magnate, Jason Scott (Giuseppe Addobbati), and his depraved son, Junior (Nino Castelnuovo), Tom enlists the help of his drunkard brother, Jeff (George Hilton), to loosen the family’s iron grip on their town.

Massacre Time is from a transitional period in Fulci’s career. As his first western, it marks a sea change from his days as a comedy writer and director and foreshadows his evolution into the Italian “Godfather of Gore,” as he’d come to be known, with such films as Zombie and the Gates of Hell trilogy (City of the Living Dead, The Beyond, and The House by the Cemetery). Though not overly bloody, Massacre Time is certainly sadistic, opening with a day laborer hunted on horseback and devoured by dogs, and its centerpiece, a nearly seven-minute sequence in which Junior mercilessly whips Tom within an inch of his life, is as breathtakingly excessive as the finale that more than lives up to the film’s title.

Lucidi’s My Name Is Pecos, also from 1966, stars Robert Woods as the titular character, a Mexican wanderer who seeks to settle a score with Joe Clane (Pier Paolo Capponi), the man who slaughtered his family. To complicate matters, Clane and his gang are on the trail of a large sum of money, stolen from them by a cohort gone rogue, providing Pecos with an unexpected opportunity to get one over on the cruel outlaw and exact his revenge. Though My Name Is Pecos proved popular enough to spawn a sequel, its protagonist lacks the panache of Django, Trinity, Ringo, and even Sartana, and while it doesn’t lack for righteous, biblical fury and a few corking lines, the film ends with a literal bang and a bit of a whimper.

Dallamano, who did the cinematography for the first two installments in Leone’s Dollars trilogy, graduated to the director’s chair with 1967’s Bandidos, which teams up Enrico Maria Salerno (The Bird with the Crystal Plumage) and Philip Raymond (Paint Your Wagon) as Richard Martin, a maimed gunslinger turned showman, and Philip Raymond, an escaped convict framed for murder. Seeing a mutually beneficial opportunity for them both, Raymond agrees to train under Martin as an apprentice to clear his name and get back at the crook who wronged his master. Dallamano may not put enough of an original spin on the familiar beats of the spaghetti western, but between its stunning visual compositions and Salerno and Raymond’s sturdy performances, the film is a rousing good time.

Last but certainly not least is Margheriti’s arresting And God Said to Cain, from 1970. A surprisingly reserved Klaus Kinski stars as former Confederate officer Gary Hamilton, who, having been framed for a crime he didn’t commit, has spent the decade following the Civil War on a chain gang. Pardoned suddenly, he makes his way to his former home, hell-bent on dismantling the life of the man who framed him, and with an almost supernatural fervor.

Margheriti is best known for directing 1980’s Cannibal Apocalypse, but he was already well-versed in gothic horror by the time he saddled up to direct And God Said to Cain, what with Castle of Blood (co-directed with Sergio Corbucci) and The Long Hair of Death, both from 1964, already under his belt. He brings a stylistic bravura to And God Said to Cain’s slasher-film-like violence, with details big and small—a tolling bell, an encroaching tornado, a hall of mirrors—not only perfectly rhyming with Gary’s feral, ever-churning anger, but also casting an unforgettable shroud of doom over the proceedings.

Arrow presents all four films in Vengeance Trails in their original 2.35:1 anamorphic widescreen aspect ratios, with brand new 2K transfers from the original 35mm camera negatives. The restorations for Massacre Time, My Name Is Pecos, and Bandidos were all undertaken specifically for this box set, while Arrow did additional work on a previous refurbishment of the Italian version of And God Said to Cain, buffing the visual and sound elements. From the lush greens of the Treja Valley to the dusty corridors of Elios Studios’s western street set, to the quarries and gorges of the Italian countryside and Rome’s Villa Torlonia (the one-time residence of Il Duce himself), this set presents some of the genre’s most indelible locales and vistas with picture-perfect clarity. The mono Italian and English language tracks for the first three films were remastered from the optical sound negatives, and while all And God Said to Cain also boasts a mono track of similar quality, this film’s ambient sounds, from the cracks of whips and brays of horses, sound especially intense to these ears. And, of course, the charmingly overblown title tracks, crooned by the likes of Sergio Endrigo and Bob Smart, are made to ring out loudly in all their brassy schmaltz.

Given Arrow’s track record, Vengeance Trails is unsurprisingly stuffed to the gills with extras that add immensely to the enjoyment of the four collected films. Historian Fabio Melelli is present on each disc in a series of video interviews, providing worthwhile analysis of the films, and a handful of critics and authors show up to provide insightful commentary tracks, including C. Courtney Joyner, Henry Parke, Kat Ellinger, and Howard Hughes, who also authors the included booklet. Actor Robert Woods joins Joyner on the My Name Is Pecos track, and though he’s the only cast or crew member to appear in this capacity, various other important figures crop up throughout in new and archival interviews, such as Franco Nero, George Eastman, and Bandidos assistant director Luigi Perelli, all of whom providing entertaining anecdotes about the making of the films. It’s almost impossible not to note the advanced ages of the interviewees, which makes Vengeance Trails feel even more essential in light of our increasing distance from this era of Italian filmmaking. Rounding things out are photo galleries, Italian trailers, and even an alternate end title sequence for Bandidos. The set also comes with a fold-out, double-sided poster featuring newly commissioned artwork by Gilles Vranckx, and reversible sleeves for each disc featuring original artwork. And all the discs are housed in a handsome slipcover box, also featuring art by Vranckx.

Vengeance Trails is one of Arrow Video’s most substantial box sets in recent memory, and while the collected films aren’t the best that the genre has to offer, fans of spaghetti westerns and newcomers alike will find a lot to enjoy here.