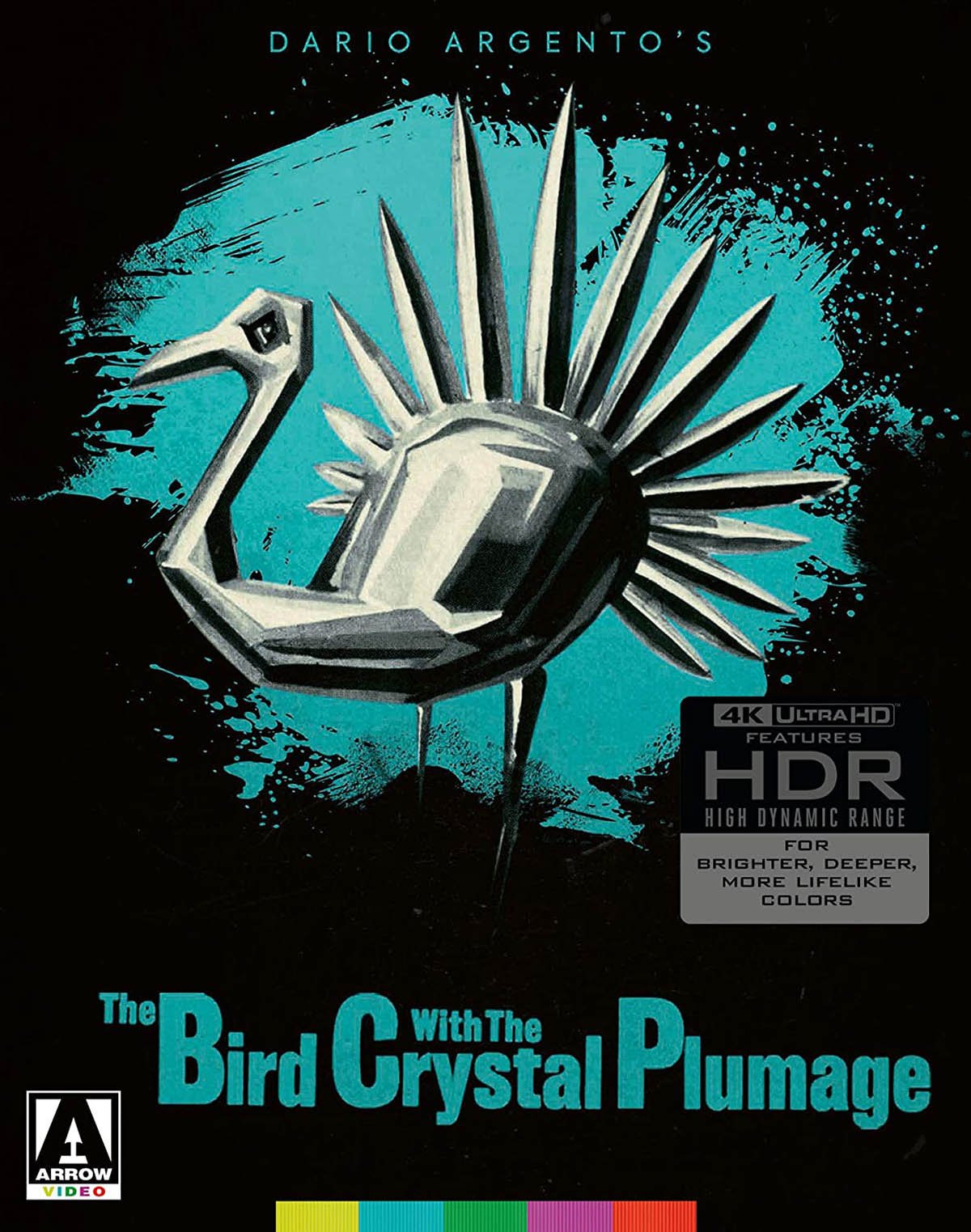 Dario Argento’s The Bird with the Crystal Plumage begins with a set piece that beautifully condenses the relationship between theme and function in the classic giallo. Sam Dalmas (Tony Musante), an American writer trying to rejuvenate his creativity in Italy, stumbles upon an apparent murder being committed in a posh art gallery. A faceless figure in gloves and a raincoat is accosting Monica Ranieri (Eva Renzi) on the top floor of the building. An exterior shot of the gallery is so transfixing—so rife with prismatic visual variables—that we’re as stunned as Sam, forced to drink everything in at the rapid rate with which Argento provides the stimuli. Monica and the assailant struggle over a knife and the latter escapes down the stairs while she tumbles to the ground floor at the entranceway of the gallery, bleeding from a stab wound. The assailant pushes a button to open one but not both of a nearby exit’s automatic doors, trapping Sam in the glass entrance to the gallery as he witnesses Monica’s suffering.

This image of Sam’s entrapment is also one of emasculation, as his powerlessness is emphasized for all to see, and of voyeurism, as our protagonist is held captive, watching a lurid narrative unfold before his eyes. Argento’s early gialli are preoccupied with women as the true, albeit warped, bearers of social power. The killers in these films are often women, dressing in masculine sadomasochistic garb for murder and toying with male heroes who chase their own tails, engaging in ultraviolent wild goose chases that serve as perverse role reversals. And the male characters are often emasculated before the narrative commences, as broke and creatively blocked artists are traditional Argento protagonists, and so the killings echo their fears of uselessness, while empowered and attractive women take over the men’s lives, only to be undone by their own gender-specific inferiority complexes.

Argento’s obsessions and neuroses are rooted in evolving gender roles of the era, and partially in the films of Mario Bava and Alfred Hitchcock, whose analyses of sexual tensions were well ahead of their respective times. In turn, Argento showed American directors of the 1970s, particularly Brian De Palma, how Hitchcock’s templates could be updated for an overtly chilly and sexual contemporary age. There’s also a strong relationship between the giallo and Michelangelo Antonioni’s films, which inspired a less horror-minded and more existential strain of American film with emasculated male characters at their center, the finest examples of which are Francis Ford Coppola’s The Conversation and De Palma’s Blow Out.

The art gallery in The Bird with the Crystal Plumage itself serves as an apt symbol of Argento’s aesthetic. Trapped behind a wall of glass, which resembles a movie screen, Sam looks in on a scene of gorgeous, decadently rapturous terror. The art on display includes sharp, dangerous metal sculptures that might have been pilfered from the House of Usher’s private collection. This gallery, like Argento himself, makes a show of aestheticized violence. The suspense and murder set pieces of Argento’s great films are disturbing, but they’re also sumptuously staged and delicious to behold, in a manner that isn’t particularly moral. The Bird with the Crystal Plumage was Argento’s first film, which is astonishing considering its authority and polish, and how firmly it set the stage for the first wave of the director’s filmography, which would include The Cat o’ Nine Tails, Four Flies on Grey Velvet, and Deep Red.

A key to Argento’s aesthetic is his unique way of conjuring simultaneous notions of fullness and emptiness in his frames. The Bird with the Crystal Plumage is deliberately curated to be visually tickling, taking us back to the self-conscious metaphor of the gallery. There’s always vivid bric-a-brac in any given setting, whether it’s the J&B scotch in Sam’s apartment or the creepy triangular roof above a woman who’s killed, or the Victorian fog in a scene when Sam’s nearly beheaded, or the almost comically sexual mesh nightie worn by another female victim. Even a simple setting, such as a police office, is furnished with a map of Rome in the background to prompt the viewer to perform work of detection and discernment.

Yet there’s also massive expanses of negative space within most of the images that deliberately isolate characters and emphasize their vulnerability, inspiring discomfort on the part of the audience. Argento mines even exposition scenes for this sort of tension, such as when Sam’s speaking with Inspector Morosini (Enrico Maria Salerno). The filmmaker places each man on a different side of the room, filming them from the vantage point of the ceiling and gradually panning to accommodate the men as they move around the setting. Such a dynamic composition is usually reserved in conventional films for pivotal scenes, and so we’re subconsciously primed to expect more than peaceful trading of plot information.

Argento links us empathetically to his heroes, as we become nearly as eager for resolution as they are. And The Bird with the Crystal Plumage’s wicked punchline complements the conceits of emasculation and passivity with another irony that would become a significant element of Argento’s artistry: The solution to the mystery is right in front of us all along, obscured by a spit-second elision that represents Sam’s crushing failure of perception.

Arrow Video already showed off the strength of the film’s 4K restoration on their 2017 Blu-ray release, but their UHD upgrade expectedly brings out the full splendor of the transfer. The eye-popping primary colors positively glow thanks to the Dolby Vision boost, while the contrasts between deep shadows and glinting light refractions on glass and metal are even more pronounced. The sharp clarity of the image really brings the geometrical precision of all the interior and exterior spaces to the home video screen in all its glory. The lossless mono Italian and English tracks are ported over from the Blu-ray and still sound lush and clear, particularly in rendering the full richness of Ennio Morricone’s score.

The supplements on this 4K UHD set, all ported over from Arrow’s 2017 Blu-ray release, collectively elaborate on the giallo at large and on The Bird with the Crystal Plumage’s place in the genre. There’s plenty of overlapping information, though even this tendency reveals how certain events can be colored by the perspective of a given individual. The audio commentary by Troy Howarth, author of So Deadly, So Perverse: 50 Years of Italian Giallo Films, offers an efficient one-stop shop, as Howarth walks through the story of how Sergio Leone, who collaborated with Dario Argento on the script for Once Upon a Time in the West, recommended Frederic Brown’s pulp novel The Screaming Mimi to Argento for a film adaptation. Argento thought of himself as a screenwriter at the time, but eventually came to direct what would be called The Bird with the Crystal Plumage, fusing the Brown novel with his own interests and proclivities. Along the way, Argento clashed with producers but was saved by his father, the established producer Salvatore Argento.

Howarth also riffs on motifs and symbolism, which is covered succinctly by “The Power of Perception,” a visual essay by Alexandra Heller-Nicholas that discusses the recurring symbols and motifs throughout Argento’s career, such as an obsession with paintings as repositories of truth. An interview with critic Kat Ellinger persuasively highlights the gender complexities and ambiguities of Argento’s films, refuting the knee-jerk claims of misogyny that have dogged them over the decades. Most excitingly, we get to hear straight from the horse’s mouth, so to speak, as Argento discusses The Bird with the Crystal Plumage at length in an interview recorded specifically for the 2017 Blu-ray release, telling familiar stories, such as his tension with lead actor Tony Musante, with a weary wit that provides a glimpse at the emotional dimensions of a great filmmaker. There’s also an interview with actor Gildo Di Marco, as well as an archive interview with actor Eva Renzi, who seems to believe this film, like all films apparently, was below her talents. A number of odds and ends round out this wonderful package: a beautiful fold-out poster, recreations of lobby cards, reversible art, theatrical trailers, and a booklet with essays that go deeper into Argento’s themes and techniques.

Improving upon what was already one of Arrow’s best Blu-rays, the UHD presentation of The Bird with the Crystal Plumage is quite possibly the label’s best 4K release to date.