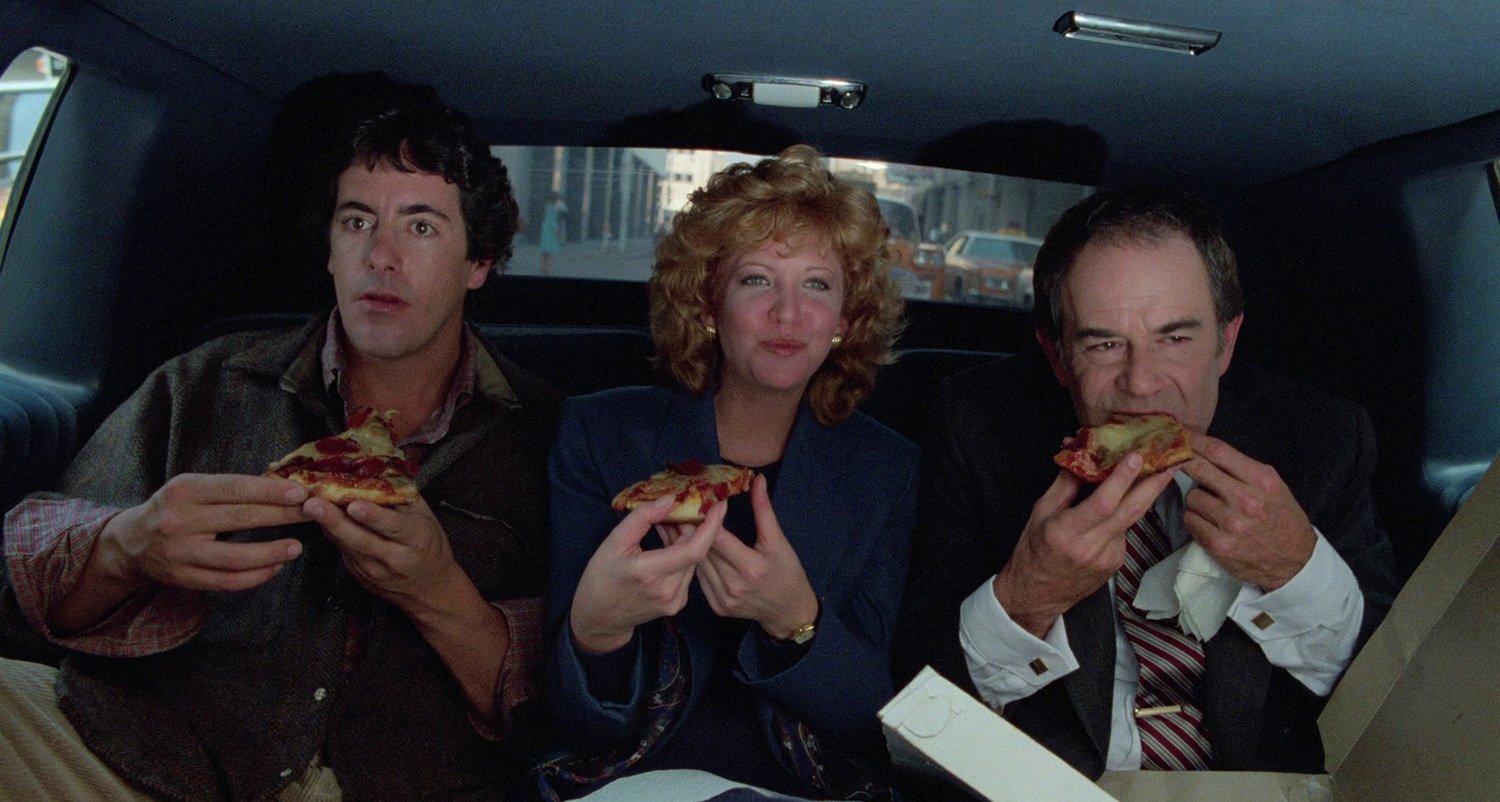 In the wake of the critical and commercial success of his blackly satiric Eating Raoul, writer-director Paul Bartel got the greenlight (and a significantly higher budget) to make Not for Publication, a sporadically successful attempt at a throwback to the screwball comedies of the 1930s and ‘40s. Given its setting amid the unscrupulous demimonde of muckraking journalism, the film could be seen as a spiritual successor to William A. Wellman’s Nothing Sacred. But the humor here straddles the fine line between subversively absurdist and just plain goofball, with individual gags not infrequently landing on the wrong side of that divide. Fortunately for viewers, several legitimately amusing set pieces sprinkled throughout the 1984 film manage to stick the landing reasonably well.

Not for Publication opens with a surreal non sequitur: Aspiring “serious” journalist and tabloid columnist Lois Thorndyke (Nancy Allen) attempts to interview Hugh Hefner-wannabe Cy Katz (Don Peoples) as he flees a mob of gun-toting waitresses from his nightclub. In lieu of Playboy bunnies, we get the Tigresses, replete with cat ears and paste-on whiskers. The off-kilter weirdness is compounded when it’s revealed that Lois travels around in the back of a milk van that doubles as a mobile news unit, accompanied by her little-person sidekick, Odo (Cork Hubbert). These opening scenes establish a wild, free-for-all vein of satire that’s a lot closer in tone to Bartel’s earlier Death Race 2000 than what this film actually ends up delivering.

Lois and new recruit shutterbug Barry Denver (David Naughton) are soon hot on the trail of crime and corruption that eventually leads to the office of Mayor Franklyn (Laurence Luckinbill). Along the way, the investigative duo encounter a cast of broadly sketched caricatures like Signor Woparico (Barry Dennen), a high-class “peemp,” and Barry’s mother, Doris (Alice Ghostley), whose mediumistic skills can channel the dead—quite literally, as when we find out that she runs her own pirate radio station. Adding a dash of welcome grit to the proceedings are a few street scenes that were shot around Times Square circa 1984.

When it comes to notions of fair play and civic responsibility, Bartel’s cynicism steadily ramps up over the course of the film. The ironic finale gives everybody exactly what they want—but only as long as they capitulate to the mayor’s crooked agenda. Such self-serving complicity suggests the direct inverse of All the President’s Men, where journalistic grunt work and dogged determination help topple a corrupt administration in the end. The film seems to say that all the hard-won victories of the ‘70s (like Richard Nixon’s ouster) have been eclipsed in the early ‘80s by Ronald Reagan’s reactionary “Morning in America.”

Scenes from the Class Struggle in Beverly Hills, from 1989, reunites Bartel with Mary Woronov and Robert Beltran, his Eating Raoul stars. The script was written by Bruce Wagner, who seems to delight in taking wildly aimed potshots at L.A.’s rich and famous in works as tonally disparate as the TV miniseries Wild Palms and the David Cronenberg-directed Maps to the Stars. Given its sprawling cast of characters, the film can afford to spread its comedy around with greater generosity than the more tightly focused Not for Publication, and it hits its targets with greater frequency as well. In fact, listening to Wagner’s elegantly couched invectives, laced liberally with inventive profanity, and delivered by a top-shelf assembly of admirably game actors, comprises one of the film’s greatest pleasures.

Events are set in motion by the sudden death of tycoon Sidney Lipkin (Paul Mazursky), even though his passing doesn’t exactly put a stop to his relationship with his widow, Clare (Jacqueline Bisset), seeing as how he reappears on occasion as an apparition in a vain attempt at a sort of postmortem seduction. Equally bereft of a husband—though he will also return, albeit by less than supernatural means—is Clare’s friend and next-door neighbor, Lisabeth Hepburn-Saravian (Mary Woronov), who decides to celebrate her husband’s desertion by having the house fumigated. And so the two households end up temporarily cohabitating, in a canny fusion of The Brady Bunch and Lifestyles of the Rich and Famous. The stage is thus set for the wholesale war of all against all, like Thomas Hobbes’s Leviathan…only with jokes.

The ensuing storyline is labyrinthine and highly episodic, with characters caroming off each other in ever-shifting permutations, each of them intent on pursuing their own self-absorbed agendas. The central engine of motivation is a bet between rival domestics, Juan (Robert Beltran) and Frank (Ray Sharkey), as to who can first seduce the other’s employer. The morality of the wager is dubious, to say the least, but the way each man responds is telling. Juan succeeds, then lies about it, claiming he failed. Frank does fail, but arranges things, in truly sitcom fashion, so that it seems like he has succeeded. The film as a whole occupies an equally liminal position with regard to moralism: It invites us to laugh at horrible people doing and saying horrible things to each other, but also to care just a little bit about them as they do.

Paul Bartel’s Not for Publication and Scenes from the Class Struggle in Beverly Hills are now available on Kino Lorber Blu-ray.

Review: Céline Sciamma’s Portrait of a Lady on Fire on Criterion Blu-ray