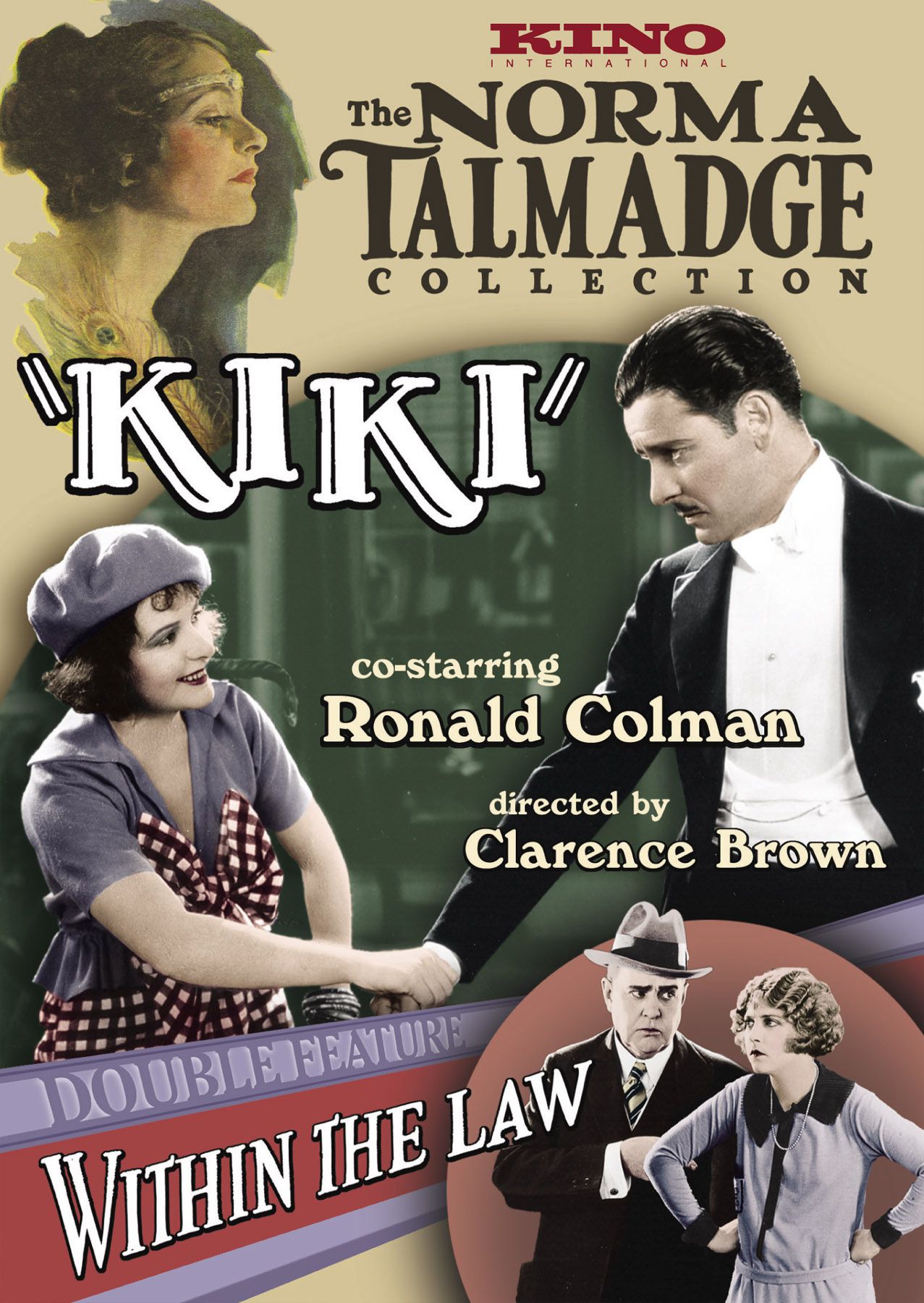 By 1920, Norma Talmadge had eclipsed Mary Pickford as the top worldwide female box office performer. Today she’s barely remembered. Unfortunately, Kino’s single-disc release of Within the Law and Kiki under the title The Norma Talmadge Collection doesn’t do much to further an understanding of her appeal. The inclusion of the frothy backstage comedy Kiki particularly does a disservice to Talmadge neophytes, because her subtle, naturalistic performing style—rarely emoting with more than her eyes—finds its most elegant expression in melodrama, not farce. Both of these films, though, still hold one’s interest as studies of a pre-feminist 1920s women’s lib.

Within the Law, though dealing with the plight of a department store clerk named Mary wrongly accused of theft by her boss and sentenced to three years in prison by a judge straight out of Les Misérables, doesn’t actually code Mary’s suffering as gender specific. She’s not just another pitiable shopgirl, and Talmadge’s under-acting doesn’t cry out for sympathy. In fact, the film is mostly a devastating critique of the judicial system’s inherent class biases. Mary gets three years, even after the jury recommends leniency, only because the prosecutor wants to set an anti-theft example to the working masses. However, a rich banker’s wife who is caught shoplifting is let go immediately, with not even a warning, so as not to create a scandal. Mary self-consciously deploys her feminine wiles, however, after being released from prison, by ensnaring wealthy married men and then taking them to the cleaners with breach-of-contract suits. As she puts it, “I intend to use the methods employed by the unscrupulous rich—in other words, I will always keep within the law.”

Her plan to exploit her womanhood for revenge against the patriarchal order that imprisons her suggests the potential for a protofeminist revenge fantasy as imagined by Alexandre Dumas, but alas, as the previous on-the-nose quote suggests, most of the narrative action is conveyed merely through the intertitles, in bold declarations of intent by Mary. Sadly, the film comes off mostly as a political tract rather than drama. And the fact that Mary herself is presented as utterly innocent of the crime of which she is accused undermines the force of her (and the film’s) argument when she says to her accusatory boss, “[The girls] want decent food and warm clothes—a little happiness—the things they cannot get honestly and decently with the wage you pay them.”

Kiki is a particularly strange yet ultimately generic film. Though made in 1926, it resembles very much the 1930s backstage musicals that offer up both wish-fulfillment images of glamour and success, but also dramatize the economic reality underlying many would-be-stars’ desire to “make it.” Talmadge’s Kiki is a Parisian gamine hoping to make it on the chorus line of a big-time musical producer, Renal, played by an impossibly suave Ronald Colman. Sadly, the biggest selling point this film has to offer cinephiles is as an opportunity to see Colman work without his greatest asset—his velvety voice, still the apex of masculine sophistication in the movies and such a hit in films of the ‘30s and ‘40s like A Tale of Two Cities, Lost Horizon, and The Talk of the Town.

Prefiguring ‘30s screwball conventions, Kiki, not content with finally earning a place on the chorus line, sets out to win Renal’s heart as well, but decides to do so through a series of appalling pranks, including feigning a cataleptic coma just so she can stay in his home indefinitely. Carole Lombard in My Man Godfrey and Katharine Hepburn in Bringing Up Baby could perhaps both use psychiatrists more than husbands, but their charming quirks ultimately redeem their borderline psychoses. Talmadge exudes no such offbeat appeal and casts off her typical understatement for broad pantomime, bugging her eyes, flailing her arms, in a bizarre attempt to both seduce Colman and ruin his stage show, as if some unfunny, silent-movie version of Lucy Ricardo.

This being the kind of product that it is, it’s no spoiler to reveal that they do indeed end up in each other’s arms, but it’s difficult to consider it a happy ending for Renal. Still, director Clarence Brown’s sweeping tracking shots seem refreshingly cinematic after the stagy literalness of Within the Law. He also employs a subtle image system of doors opening and closing as metaphors for opportunities gained or lost, then subverts it when Kiki opens a door only to see Renal embracing another woman.

Though both these films are disappointing and call to mind superior analogues (Baby Face in the case of Within the Law and Gold Diggers of 1933 for Kiki), the most that can be hoped for is that, if this set is successful, Kino may release Talmadge’s genuine classic, the Frank Borzage melodrama Secrets from 1924). Only then will one be able to truly appreciate Talmadge’s forgotten talent.

Kiki’s restoration is far more successful than that of Within the Law, which is unfortunate because Kiki is mostly brightly lit, while Within the Law features some more naturalistic lighting effects, meaning that the grain, lines, and scratches show up painfully clear against any shadows. Kiki features a competent jazz accompaniment by the Biograph Players, and Within the Law features an original piano score composed and performed by Makia Matsumura.

Kino is well known to disappoint with their often paltry special features, and The Norma Talmadge collection is no exception, only offering up movie posters, production receipts, and still frames from the movies.

Kino’s disappointing two-film set does little to shed light on the forgotten talent of Norma Talmadge.