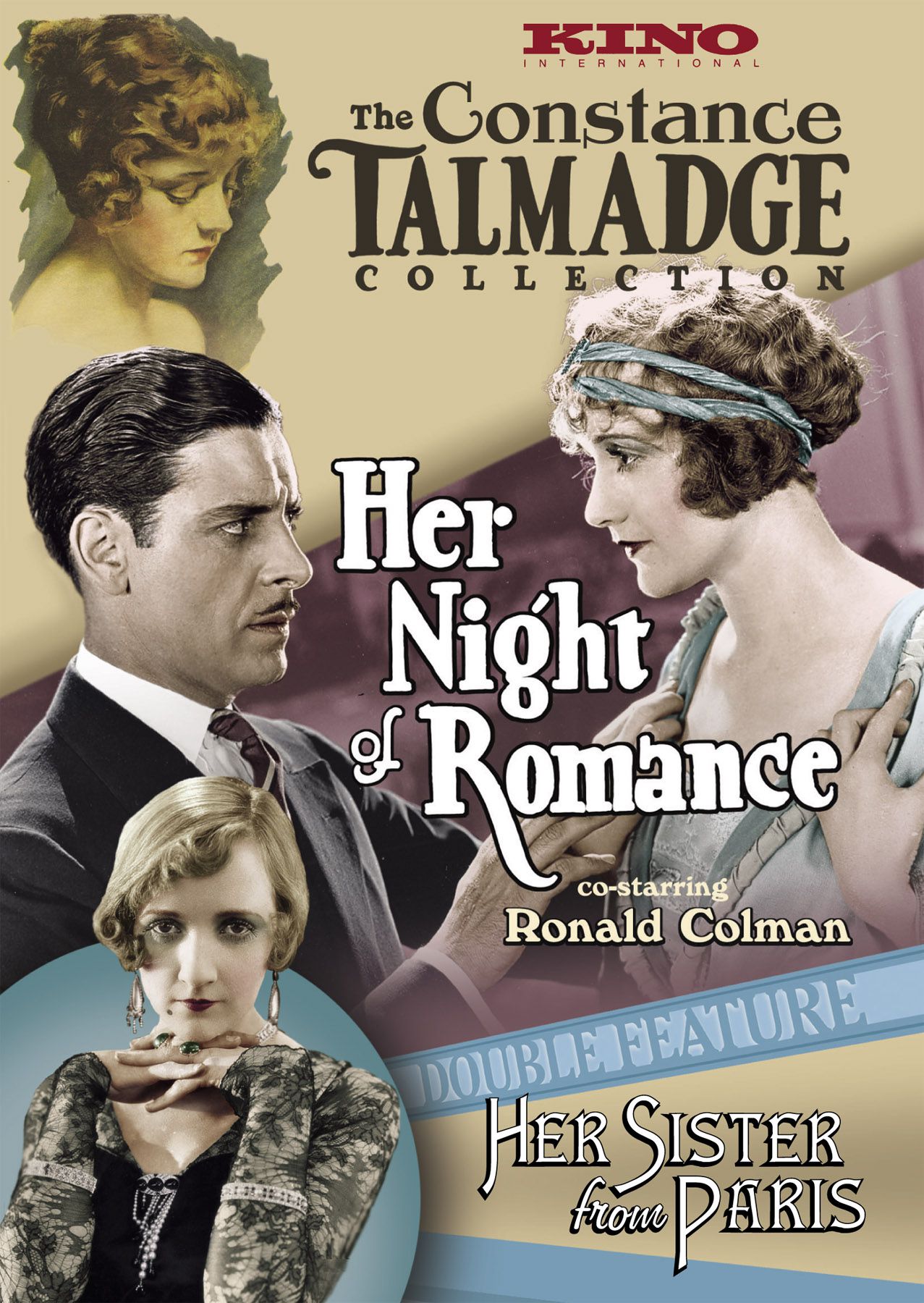 Constance Talmadge acted mainly with her face, especially with her eyes and mouth. When she first appears in the 1924 silent film Her Night of Romance, the actress is pressing a fur to herself tight as a straitjacket, but the memorable thing about her is her pale melon head, spectacles smashed against eyes. She only loosens the bolts to flap her lips up, bare her teeth, and crook her tongue out, all for the purpose of looking awful for a photo. She de-spinsters in the following year’s Her Sister in Paris, where, shocked and horrified, she folds her mouth into a flapjack jeepers expression; her opal-eyed fear leads her to weeping, and as she tucks her head down, she exposes layers of chin fat. Her man’s got her blue, of course, and her get-him-back journey ends with one of the best closing shots in film history: Connie presses the man’s head against her shoulder, stares directly at us with a trace of a sneering smirk, and shuts the door. The camera, getting it, tracks out.

This daring, delightful moment follows 73 minutes of corn. Romance and Sister form the double-feature on a new Kino release, itself timed to come out with DVDs of films starring Constance’s melodramatically swooning sister Norma. Both Romance and Sister follow the same formula. Connie—rich, strange, young, and innocent—falls for an unrepentant cad who eventually repents. They move past intertitles of feigned sophistication and awful wisecracking (“Let us leave Paris to the Parisians, Cairo to the Chiropractors”), through the corridors and hallways of a studio-built Europe where each column’s lines are clearly, thickly delineated. So are the behaviors, most of which are captured in fourth wall-respecting living rooms, with theatrical medium-range setups.

It makes sense that the movies would be so alike, since the same team worked on them—not just Talmadge, but also leading man Ronald Colman (young, still mustachioed), director Sidney Franklin (who worked with Talmadge at least nine times in the silent era and directed award-winning schmaltz like The Good Earth in the sound days), producer Joseph M. Schenck (married to Norma), writer Hanns Kräly (who also worked on a few silent Lubitsch films), and set designer William Cameron Menzies (the eventual mind behind the 1936 sci-fi H.G. Wells adaptation Things to Come). They operated less like an artists’ enclave, though, and more like a factory unit, churning out goods to fit a formula. This was true even of Talmadge, both literally and figuratively wiggling with little room. As Dave Kehr recently and wonderfully wrote, much silent film acting aimed to convey “significant surfaces—a repertory of gestures and facial expressions, with agreed-upon meaning.” For Talmadge, the meaning was caricature of the upper classes; as she herself said, “I try to handle a comedy role much the same way that a cartoonist handles his pencils.”

Human cartoons like Chaplin, Lloyd, and Keaton (coincidentally married to sister Natalie Talmadge) are better remembered today than her. It’s true that, while they each made better movies than she did, they also had better material. In the silent days, for the most part, men could be funny, women pretty. This was largely because men could more comfortably possess outsider status (think Chaplin’s Tramp), with women kept indoors.

An actress like Talmadge, though, seems to assert that women can smash society in a different way from men. For the male comics, the attacks are often on legal or political systems—stealing groceries, or spilling soup on party bosses. For Talmadge, the attacks are sexual. If the physical expresses the ideological in silent comedy, then the freedom with which people move on screen expresses their own level of personal freedom. For women, slinky mobility defies male attempts to keep them cooped up as trophies. To reach out is to push back. Someone like Jean Harlow could flaunt the goods because her characters were lower class or came from lower-class backgrounds, where their behavior was less codified. Talmadge, among the aristocrats, could only move bit by bit. When Harlow lays on a divan, her body sprawls; by contrast, when Talmadge lies on a chaise in Romance, you can practically see a box drawn around her.

Much of Talmadge’s humor comes from her constriction, and from the sight of what happens when she meets people even more constricted than her. Colman’s an effective foil for her because of his, for lack of a better word, stiffness; there’s a scene in Sister where she kisses him so hard that he snaps his pencil. This is a chaotic scene, so far as the film permits one (a Shakespearean comic plot of the heroine switching identities with her looser twin sister milks surprisingly few jokes). Toward the end of the film we know that order’s been restored from the way she repeatedly strokes his perfectly coiffed hair without mussing it. Yet wispy strands stand up from her hair, expanding the amount of space she would normally take up, and so subtly enforcing her mounting control. In the battle of the sexes, Connie’s fighting for inches.

You have to look for moments like these though. Jonathan Rosenbaum has distinguished between silent and pre-sound films, and both parts of the double-feature are definitely the latter, slogging through title cards that in sound films would be turned into dialogue delivered like tennis volleys (the kinds of jokes the films employ are also funnier spoken than read; for a reference to “a light supper of oysters and aspirin” to really work, it needs Herbert Marshall’s Continental drawl). There’s not much original about them visually, and indeed Franklin seems most engaged when he’s aping German expressionism. I’m not even entirely sure that either film is a case of performer as auteur, though by calling the disc The Constance Talmadge Collection instead of The Joseph M. Schenck Collection, Kino clearly intends them both to be thought of that way. Talmadge doesn’t shape or dictate the frame so much as operate within it. In theory, the thought of subverting boundaries is interesting, but life is short, and I’d rather watch forces of nature.

That said, it’s partly to Talmadge’s credit that those forces came about—as with any movement (social, not physical), the pioneers need to lay the groundwork before the most exciting work can be done. Talmadge’s sketches of subversions made it possible for later actresses to paint landscapes. To name an immediate example, the power dynamic between her and Colman, with the sly woman stroking the shy man’s hair, seems an important precursor to Barbara Stanwyck’s extended toying with thunderstruck Henry Fonda’s scalp in The Lady Eve.

Talmadge’s work ripples in subtler, less direct ways too. The way her eyes grow and shrink, then bounce around inside her head like pinballs, helps create the conditions for actresses like Harlow to use the rest of their frames. There’s a moment in Romance where a priest asks if she’s to be married. “Yes, I am the happy bride!” she cries, nodding emphatically, so much so that she starts weeping, then takes out her handkerchief and turns. Regardless of whether ensuing actresses knew of it, you don’t have Carole Lombard in My Man Godfrey without this moment, nor Holly Hunter in Broadcast News, nor Amy Adams in Enchanted. A Rosetta Stone’s been uncovered. Generations of comic heroines tumble forth with a nod.

With silent films, the state of the surviving materials is always a huge question. Fortunately, both films seem to be presented in relatively complete prints, a few action jumps within shots the only noticeable exceptions. The action is clear for most of the time, but in brief stretches the print turns bubbly or goes white (this is much more of a problem in Sister than in Romance). Scratches galore too, but so be it—these are all irritations that patient viewers can overcome. The films are still completely presentable. Their musical scores are both effective. Bruce Loeb’s Romance score is forgettable but unobtrusive, and Judith Rosenberg’s Sister job, with multiple piano keys pressed at once with singular emphasis, is actually quite fun.

A collection of still images, largely production photos, of which most are posed stills. One vintage promotional sheet promises that “If Norma is the emotional queen, sister Constance is the comedienne supreme of the shadowland world.” The sweetest treat is the very first image, though, a Romance poster with “Oh! Boy! It’s L-U-V!” in the top lefthand corner, “But it’s funny too!” in the bottom right, and Constance Talmadge and Ronald Colman walking across the moon in between.

A silent film actress widens her eyes and viewers’ minds.