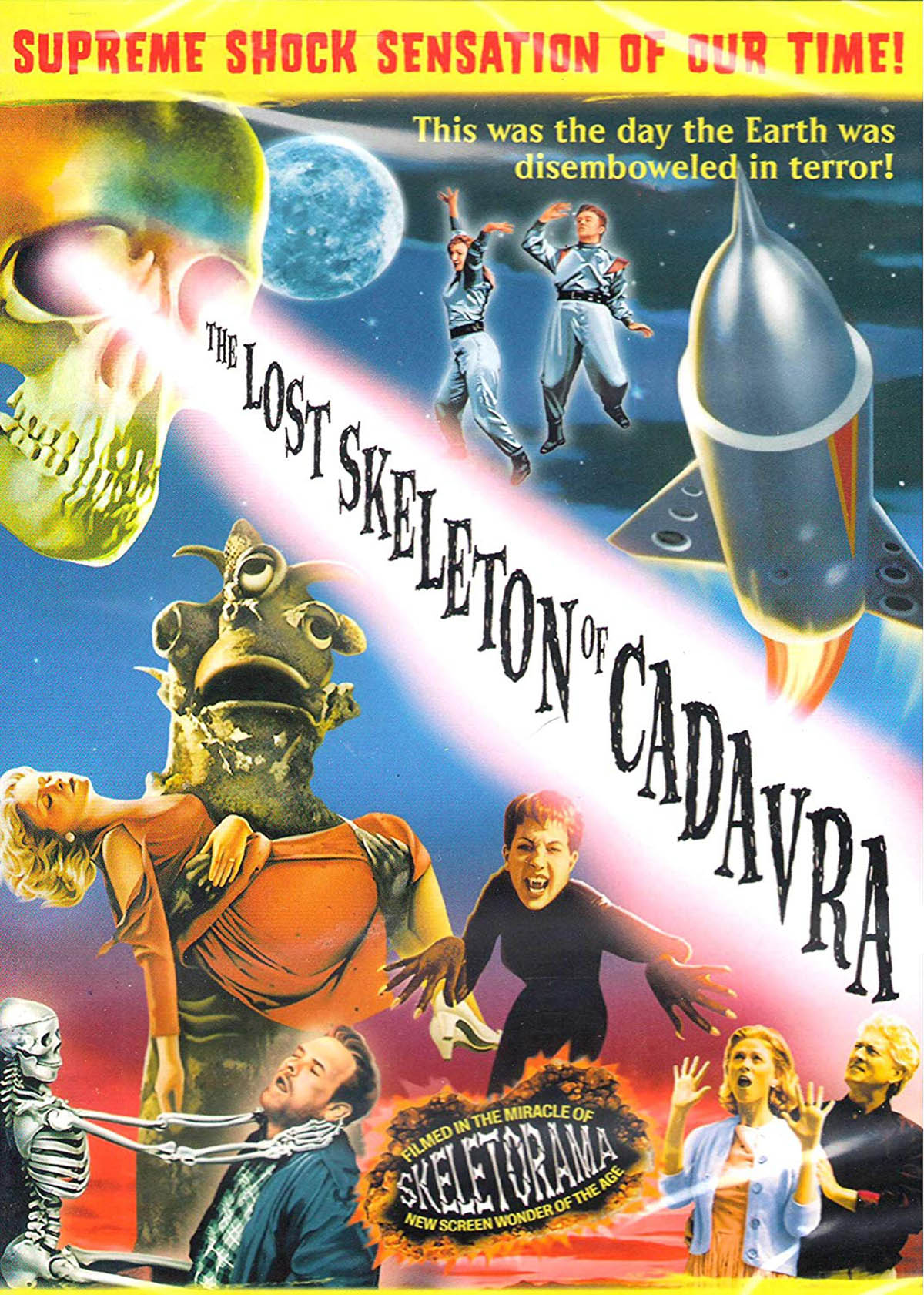 Look to the skies! What Far from Heaven was to Douglas Sirk, The Lost Skeleton of Cadavra is to those lovable Grade-Z monster movies of the 1950s. Told with poker-faced glee, the film is an “it came from another world” saga featuring a rubber suit mutant, a skeleton intent on conquering Earth (pulled along on a not-so-invisible string), a cat-woman (Jennifer Blaire, whose sensual hypnotic dance number that lures the hero to near-death is a showstopper), and formal speaking alien visitors dressed in cover-alls and glitter.

Writer-director Larry Blamire has a genuine taste for this material, right down to his performance as the “man of science” whose peppy wife (Fay Masterson) succumbs to alien mind control. Set in and around Lake Arrowhead and Bronson Canyon, California (that famous no man’s land from Robot Monster), and scored with vintage music from the period, The Lost Skeleton of Cadavra is a nostalgia coup and, frequently, a real hoot.

The title fiend’s Johnny Carson one-liners quickly grow tiresome, but he’s thankfully off-screen for most of the running time. That’s a small price to pay among zingers like a climactic battle for world supremacy between what’s obviously a stuffed rag monster and a medical school skeleton. The perilously low budget plays to The Lost Skeleton of Cadavra’s advantage, and the scant 90-minute running time assures that it doesn’t wear out its welcome. It may be a one-gag premise, but it’s told with affection and an “aw, shucks” reverence.

On this DVD edition, The Lost Skeleton of Cadavra looks and sounds the same as it did in theaters, but that can’t take away the fact that director Larry Blamire’s visual palette is all wrong. Because of Blamire’s small budget, the film had to be shot on digital video, which doesn’t exactly make the black and white any more credible. The images are muggy and textureless, and the noise on the screen isn’t so much evocative of real film grain as it is of video several generations away from its original master.

Starting things off are two way-overcrowded commentary tracks, one with director Larry Blamire and six other crewmembers and a second with the entire cast (sans Robert Deveau, who played the farmer in the film). Because Blamire discusses his influences on the former, that’s the way to go for techies. MSTK3 fans, though, will want to choose the latter. For those who saw the film in the theater, you’ll no doubt remember the awesome Skeleton Frolic short that preceded the film, inspired by Disney’s famous Silly Symphony The Skeleton Dance. And for anyone who wants to learn more about the making of the film, you’ll want to check out the “Obey the Lost Skeleton!” featurette and the very involved Q&A at the American Cinemathéque. Most impressive though is the Virtual Skelectables section, a section devoted to fake promotional items (lunch boxes, board games, trading cards) inspired by the film as if it really had come out in 1961. Finishing things off are trailers for The Lost Skeleton of Cadavra, Hellboy, Memories, Tokyo Godfathers, 13 Ghosts, Homicidal, Monty Python and the Holy Grail, Tingler, and a completely unnecessary promotional clip celebrating Columbia TriStar Home Entertainment’s colorized-bastardizations of old classics. First up will be a collection of Three Stooges funnies, which the studio will release on one disc but make available in both their original black-and-white and “funnier-in-color” versions.