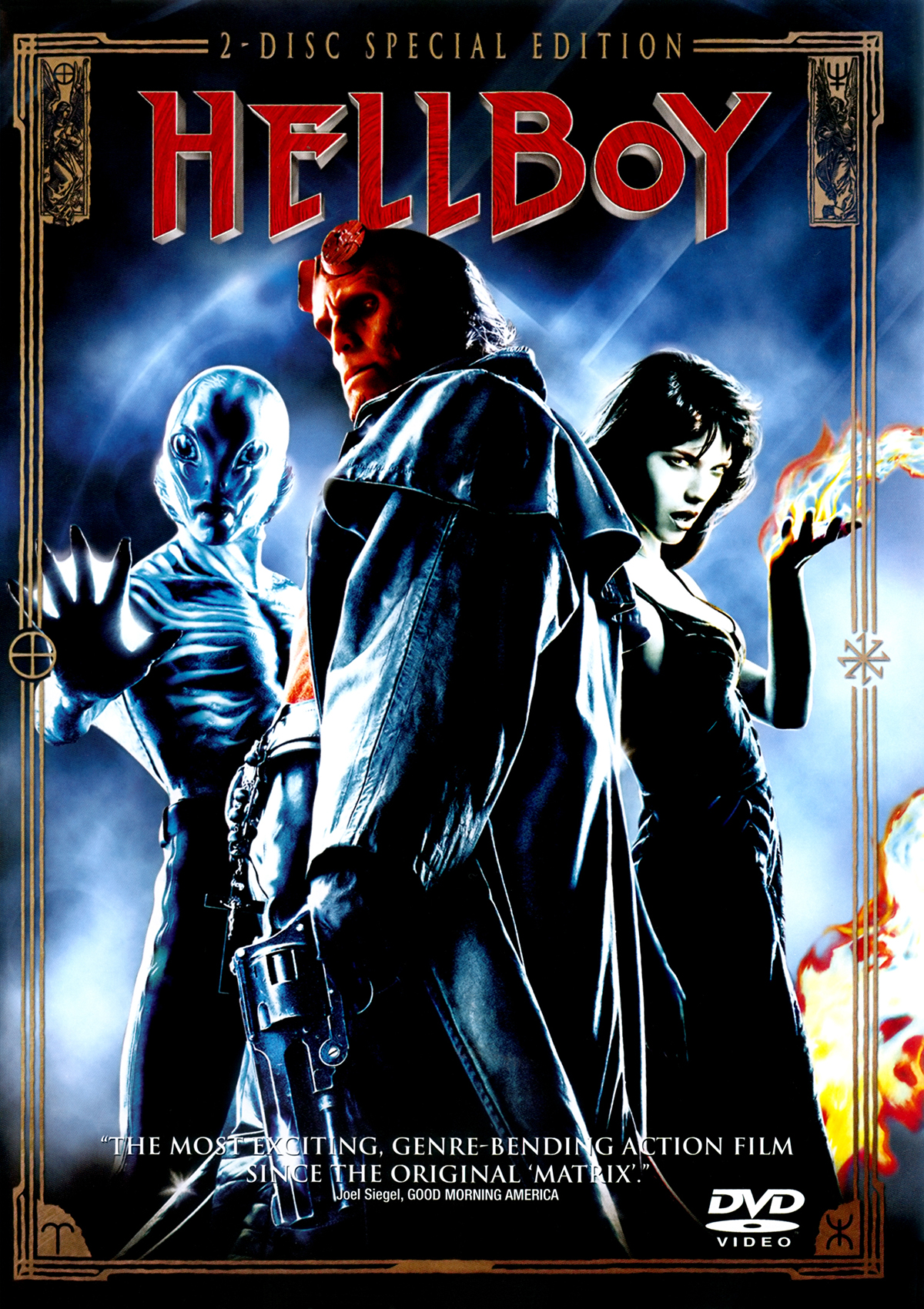 It’s easy to see what attracted director Guillermo del Toro to Mike Mignola’s Hellboy comic: its hopeful humanity. The little boys in the director’s allegorical spooker The Devil’s Backbone are gripped by an oppressive political regime just as Hellboy (a remarkable Ron Perlman) is born from the burning embers of another. Consider this paranormal detective an insurance policy against post-war angst.

I’ve never laid an eye on Mignola’s comic, but I know a good del Toro film when I see one. Not unlike the night crawlers from Blade II, evil in this action-packed extravaganza is crazy, sexy, cool. Del Toro understands the allure of evil, and he evokes its pull in the way madman Grigori Rasputin’s minions move through the frame. In many ways, Hellboy is a companion piece to Blade II, as del Toro likens in both films the threat of an ancient evil to a pestilence born from a kind of cultural recklessness (the grooves on the floor of an ancient Maldavian temple are aesthetically intravenous, and a vial of ancient powder is one character’s protective condom), and he recognizes how this carelessness manifests itself in his “mixed” outsiders.

Hellboy’s intro is on the cheesy side, but it adequately sets up the nature-nurture anguish that underlines every action Hellboy takes in the film. Born to do evil, an adorable Hellboy is rescued and raised by Professor Broom (John Hurt), founder of the Bureau for Paranormal Research and Defense (humorously located in Newark), and essentially reprogrammed to combat the very thing he represents. And that the filmmakers allow the character to finally choose what works best for him is a sign of their generosity and moral clarity.

Behold del Toro’s startling use of color (namely during Broom’s monochrome funeral), which frequently emphasizes the isolation that grips Pearlman’s multi-dimensional über-Santa Claus. Because the colors in the film do not easily bleed into each other, this makes a kiss between Hellboy and the lily-white firestarter played by Selma Blair especially touching. Naturally, love conquers all, but it’s the ever-so-fleeting indentation of a burnt cross on Hellboy’s fire-resistant hand that connects him to the very will that keeps him alive.

Let me go out on a limb and say that Hellboy may be the best-looking DVD to be released by Columbia TriStar Home Entertainment. The monochromatic opening sequence is an example of the reference-quality shadow delineation on display throughout the DVD. Most of Hellboy takes place at night, and as such Guillermo del Toro gives the folks at CTHE a lot of room to mess up, which makes it all the more impressive that the interplay between light and darkness and color and blackness is never compromised. Colors are vibrant, contrast is remarkable, and edge enhancement is nonexistent. I’m surprised the studio didn’t go all out with a DTS track but the Dolby Digital 5.1 surround track is near-perfect: dialogue is crystal clear and the aggressive surrounds are truly enveloping, using the whole of the track’s soundstage and boasting excellent separation.

Disc one begins with a video introduction by del Toro, who shares a commentary track with co-executive producer Mike Mignola. For cinephilles and serious fans of the Hellboy comic, this is the track of choice. Less serious aficionados will want to opt for the more MSTK3000-friendly commentary track with Ron Perlman, Selma Blair, Jeffrey Tambor, and Rupert Evans. Next up is the piece de resistance of the whole set: a remarkable, interactive collection of DVD comics drawn by Mignola and written by del Toro. Everything after is slim pickings: a “Right Hand of Doom” collection of eight set visits, a storyboard track which I couldn’t get to work, a collection of four Gerald McBoing animated shorts. (Look for the Easter Egg on the opening title screen by moving all the way to the left.) Selma Blair introduces disc two. Inside the Egg Chamber you’ll find three deleted scenes, the exhaustive, two and a half hour “Hellboy: The Seeds of Creation” making-of featurette, and character bios and filmographies. Move into Kroenen’s Lair for a look at a scene progression, animatics, board-a-matics, and storyboard comparisons. Next up is the impressive Maquette Video Gallery for an up-close-and-personal look of baby Hellboy, among other things. Inside the Bellamie Hospital you’ll find details about the film’s print campaign including poster explorations, two theatrical trailers, and nine TV spots. Rounding out the disc are trailers for The Forgotten, Seinfeld, Spider-Man 2, Spider-Man: The New Animated Series, White Chicks, 13 Going on 30, Stephen King’s: Kingdom Hospital, Anacondas, Kaena: The Prophecy, and Resident Evil: Apocalypse.

Hellboy has a little bit for everyone, from comic book aficionados and muscle queens to fans of Gerald McBoing Boing and Selma Blair’s icy glare.