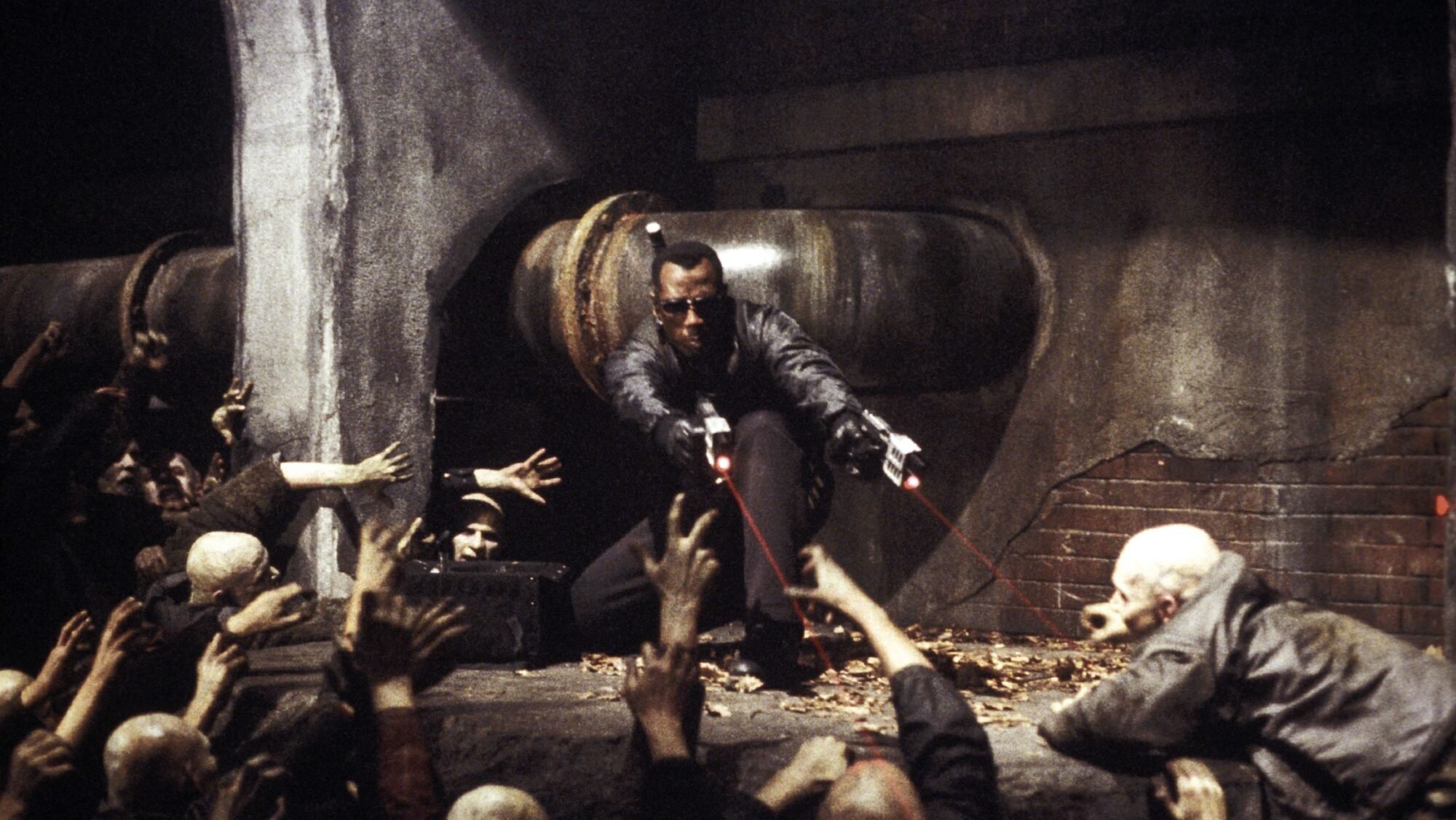 Stephen Norrington’s Blade offered a techno-hungry nosedive into a sultry vampire bloodbath. Blade is the pimp daddy of all comic-book heroes, an African-American superman trying to save humanity from a vampire apocalypse. With Blade II, Mexican horror maestro Guillermo del Toro morphs allows the titular vampire hunter into the king of all insects. Even when del Toro is under studio control, there’s no suppressing his spiritual, entomological freaky-deakyness. The director has become a tortured lover of myths. He’s the fallen Catholic easily enamored by the stained-glass worldview of fairy-tale empires at the brink of destruction. In Blade II, signature del Toro obsessions are on fierce display: a monarch’s fear of aging, his incessant desire to suspend time and his messianic opponent’s own conflicted sense of past and future.

Del Toro’s The Devil’s Backbone was the haunting tale of a Franco-era orphanage whose inhabitants are forced to reconcile their past indiscretions and nationalist ideals. Adapted from the popular Spanish comic Paracuellos by Carlos Giménez, Backbone comes to resemble a comic-book panel show courtesy of the director’s startling use of aggressive, sepia-toned primary colors. Similarly, Blade II relates the mythic saga of two opponent groups (vampires and daywalkers to Backbone’s leftists and rightists) engaged in a war for cultural survival. And just as Santi’s ghost blurred Backbone’s sociopolitical battle lines, Blade II’s voracious pack of Reapers also seem to posit the threat of third party underdogs.

The Reapers—a strain of bloodsuckers that feeds on both humans and vampires—force daywalker Blade to forge an alliance with vampire overlord Damaskinos (Thomas Kretschmann), a throwback to Claudio Brook’s ageist ghoul Dieter de la Guardia from Cronos. This virulent breed of vampire slithers through the film’s Prague as if making their way through a labyrinthine beehive. Sewer stones come to resemble the walls of a technological bee colony scaled by the diseased minions of Patient Zero, Jared Nomak (Luke Goss). Damaskinos is a vampyric Dr. Frankenstein who yearns for the purity of his race only to have his guinea pig creation turn on its own master/father. Del Toro sympathizes with Nomak if only because the half-breed’s über-AIDS pestilence becomes the tragic byproduct of cultural carelessness.

Blade and his vampiric enemies form a Bloodpack alliance that seeks to save humanity (Blade’s brethren, a.k.a. vampire food) from a plague that threatens cultural stasis. Del Toro subtly exposes a resentful Nomak’s instinctual need to propagate his own vampyric Aryan agenda, hinting at a double-cross within the alliance where a lesser, gimmick-hounding director might have kept mum until the last act. Del Toro’s night crawlers are the awesome composites of vampire archetypes and insect metaphors—they’re androgynous feeders that nonetheless display all the skills of sexed-up vampire dancers. A kick-ass fight sequence inside a Prague factory pits Blade against a duo of black-clothed vampires whose metal swords look and sound more like the hyper-swishing wings of sexy insect monsters.

As much as Blade II seems to stand on its own, screenwriter David S. Goyer wastes a good 15 minutes referencing events from his original story. Del Toro has fun with the film’s cornball title sequence yet its difficult to buy into its utter superfluousness. While the flashbacks may be crucial in explaining Whistler’s (Kris Kristofferson) return, Goyer’s revisionist back-tracking exposition feels an awful lot like a soap opera’s Monday recap. Del Toro also spends dubious time replicating visual flourishes more authentic to Norrington than to the original Marvel comic. Indeed, fast-motion shots of blue-tinted horizons were more effective signifiers of Norrington’s fast-approaching apocalypse than del Toro’s grimy descent into a pestilent tomorrow. Snipes’s Blade is considerably more aloof while his blood-draining enslavement seems routine despite its necessity to the plot—still, it’s a forgivable flaw considering how much subtext del Toro affords his vampire world.

Blade II is gooey and dank, yet del Toro recognizes the allure of the original’s techno pulse. Sans Traci Lords and meat hooks, Blade II’s rave sequence may not be as fresh as Norrington’s original but the music is still hot. Norrington’s journey through the vampire party circuit became a silky, potent jab at Euro-trash elitism, one that had to nonetheless lie in shame behind a more popular culture’s fetishized dance halls—Blade had to pass the knee-sock-wearing Asian school girls to get to his bloodsuckers. Del Toro places less emphasis on the decadence of the vampire lifestyle than he does on the societal effects of its widening plague. Nomak asks in one scene: “Is the enemy of my enemy my friend?” What first seems like a cut-and-dry moral dilemma becomes an awesome, cautionary tale against cultural homogenization.