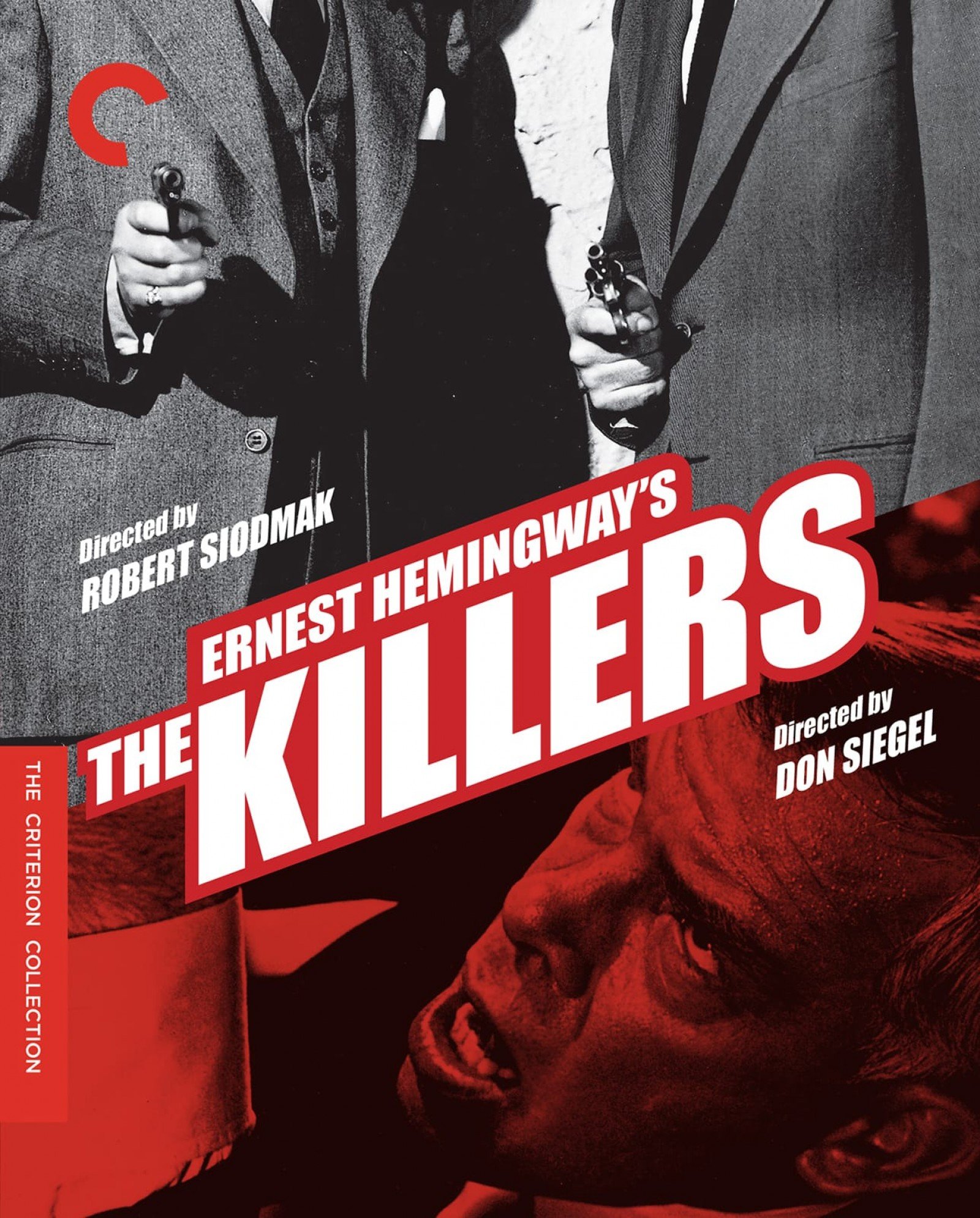 It sounds like a joke: Two men walk into a diner and bicker with the manager running the counter about what to eat. One orders the pork, applesauce, and mashed potatoes, though the manager says that dish belongs to the dinner menu, which isn’t ready until six o’clock. The other man orders the chicken croquettes with peas, only to hear the same answer. Seems like everything’s on the dinner menu, one of the two potential customers says. Eventually, they both order eggs, until it becomes clear that the men are here to kill someone. The joke begins to curdle, particularly as the characters continue to refer to the cook in the back by the n-word and to the killers’ intended victim as “the Swede.” The hoods don’t find their Swede, but we understand that it’s only a matter of time before they do. The potential violence hangs thick in the air, disrupting a counter, and a society’s, illusion of tranquil bonhomie.

That’s all that happens in Ernest Hemingway’s 1927 short story, “The Killers,” which is a marvel of implication and showing rather than telling. In a few thousand words the author says more about America than many could in a sprawling novel, offering a diamond-sharp microcosm of a society’s pecking order. The killers casually uproot the power of the comparative innocents, who insidiously wield control over people like the black cook or the Swedish ex-boxer, who’re perceived to be outliers to the divine American experience. “The Killers” is also a crackling, greatly influential suspense story, with Hemingway’s legendarily pared prose melting in your mouth like butter. You can retrospectively discern the entire future of the American crime genre within this story, from Raymond Chandler to Donald Westlake to Elmore Leonard to countless more in between and afterward.

“The Killers” doesn’t yield enough narrative to fill out three acts’ worth of a conventional feature film, however, at least not one that moves and behaves like an American crime movie of the 1940s. Robert Siodmak’s 1946 film of the same name opens with a beat-for-beat adaptation of the Hemingway story that neatly functions as a self-contained short, elegantly alluding to the oppression that’s evident in the nooks and crannies of the lunch counter’s interiors, which suggest a figurative diner of America’s collective imagination more than any singular restaurant. (It’s difficult, for instance, to watch this movie and not think of Edward Hopper’s iconic Nighthawks.) The dialogue is delivered with a perfectly blunt staccato that’s ideal for the story, particularly the lines uttered by the killers (superbly played by William Conrad and Charles McGraw), and Siodmak’s leisurely, unpretentiously modern, prismatic long takes connote a sense of evil that’s gathering in claustrophobic real time.

Unfortunately, Hemingway, despite a possessory acknowledgement in the title, can only be credited with the first quarter-hour of the movie’s running time. The remainder of the film’s 102 minutes were cooked up by screenwriters Anthony Veiller, Richard Brooks, and John Huston (the latter two uncredited), who filled in the specifics of the Swede’s (Burt Lancaster) downfall. The Swede, or Ole Andreson, is shown to be murdered shortly after the hostage situation at the diner, the film subsequently backtracking to dramatize his blossoming involvement with gangsters in a tricky narrative that inescapably recalls Citizen Kane’s chronologically scrambled structure.

Siodmak’s The Killers earns significant points for ambition and influence, but the incessant flashbacking doesn’t command our attention as it does in the Orson Welles film, which has an obsessive, neurotic undertow that renders the rickety plot beside the point. The American crime genre is generally a forward-moving beast driven by a terse, heavily symbolic sense of present tense, but Siodmak’s film is forever filling in details that we accept as a given. The Swede fell on hard times, became infatuated with a traditionally duplicitous “dame,” Kitty Collins (Ava Gardner), and was pulled into a troublesome heist. You wait for the film to put a bow on all this background detail so as to move forward, but it keeps retreating back in time to further belabor the obvious. The Killers is a svelte, vividly directed film, with a remarkable grasp of physicality, both human and locational (particularly displayed in a breathtaking heist scene that’s staged in one long master shot), but the fancy plot gymnastics keep needlessly cluttering up Hemingway’s original, evocatively streamlined setup.

Don Siegel’s 1964 remake somewhat attempts to smooth out its 1946 predecessor’s convolutions of plot. Siegel’s direction is elegantly inelegant, favoring ostentatiously quick cuts and bluntly canted angles to Siodmak’s lush, proto-noir craftsmanship. The colors are alternatingly bold and washed out, to the point of resembling certain 1960s-era comic strips or productions made directly for TV (the medium this film was originally intended for), with reds and yellows that particularly sing to the eyes. This Killers has an overheated, self-consciously nihilistic intensity, which is immediately signaled by the filmmakers’ bold decision to dump Hemingway’s story altogether for a new opening set in an institute for the blind, which culminates with the titular hit men (now played by Lee Marvin and Clu Gulager) assaulting and nearly strangling a blind woman so as to discern the location of their prey, Johnny North (John Cassavetes). The assassins find North and gun him down, but something troubles them: This was too easy.

That’s the best, funniest touch to this newer Killers: the idea of a couple of rent-a-hoods investigating a murder they themselves committed. It’s a sly, anti-authoritarian deviation from the Siodmak film, which had a square insurance man (played by Edmond O’Brien, with too much relish) looking into a murder for reasons that never made much sense. And the final scenes, with Marvin’s character killing the bad guys before suffering his own inevitable, memorably pathetic death, represent a classic fusion of Siegel, Marvin, and Hemingway’s sensibilities. (Siegel was originally considered for the version that Siodmak helmed.) Yet the director’s modernist touches ultimately scan as grace notes dotting another unconvincing, flashback-riddled dude-meets-dame story. Siegel’s film goes to sleep at the same place that Siodmak’s does, because the victim at the heart of these narratives isn’t interesting; both narratives lose something when their killers recede from the limelight. Lancaster’s physical grace gives the Swede majesty, but he barely has a character to play, and Cassavetes is palpably uncomfortable, as always, playing an uncomplicated patsy. One senses his constricted desire to bring something weirder to the party.

The Killers redux packs one lasting, significant, retrospective jolt of perversity that far eclipses any possible artistic intentions on the part of its creators though: the sight of future American President Ronald Reagan playing a baddie in his last film role before entering politics. History has turned Reagan’s excellent performance into a surrealist joke in which pop culture appears to collapse in on itself, offering a subliminal X-ray vision of one of our most divisive leaders as a banal, vindictive, business-suited agent of terror. This inadvertent punchline is as good as anything that Hemingway dare dream.

Robert Siodmak’s The Killers is a thing of formal beauty—a significant title in our blossoming awareness of collected stylistics that are now called “film noir.” The blacks of this transfer are rich and luscious, which is of great importance to a film that’s essentially a painting of shadows. Whites can be a little shrill on occasion, but it’s not a big deal, and probably inherent to the source materials. Close-ups are also occasionally soft. But, generally, this image is clean with good density and a terrific sense of dimension that’s due to remarkable interplay between the foreground and background details. Don Siegel’s Killers isn’t meant to be as attractive, as his film is a cynical rebuke to the sort of studio professionalism that Siodmak’s picture notably embodies. But this transfer gracefully honors the film’s curt, hothouse poetry, particularly in terms of primary colors, which emit a fevered intensity. Grain is well-modulated, and textures are detailed, sometimes startlingly so (look at the pained, creased faces of John Cassavetes or Lee Marvin’s characters as they die). The monaural soundtracks for both films are clean, though the Siodmak sounds richer than the Siegel—a distinction that, once again, scans as inherent to the diverse source materials. These are tip-top restorations of key American crime films.

These are the same supplements that were included in the DVD that Criterion issued in 2003, with the exception of the disappointing absence of Paul Schrader’s “Notes on Film Noir.” Otherwise, this is still a wonderful package that justifies the carry-over into Blu-ray. The most significant inclusion, of course, is Andrei Tarkovsky’s adaptation of the titular Ernest Hemingway story, which he co-directed while in college. The film is stiff, unsurprisingly for such an early work, and Hemingway’s pared dialogue doesn’t quite have the same punch in Russian (for an American, at least) that it does in English. But Tarkovsky and his co-directors confidently play with cinematic frames-within-frames, and the atmosphere is distinctly grubby and surreal.

Also included is the Screen Directors’ Playhouse radio adaptation from 1949 of the 1946 film, starring Burt Lancaster and Shelley Winters, which is to say that this single disc features a total of four adaptations of one story, inviting a potentially informative game of compare and contrast. If that isn’t enough, actor Stacy Keach is on hand to read aloud the story itself, reminding viewers that he would’ve made a great “killer” himself. The interview with Clu Gulager and the audio excerpt from Don Siegel’s autobiography offer pungent slices of Hollywood self-mythologizing. Rounding out this package is an assorted collection of trailers for other Robert Siodmak films, an interview with writer Stuart M. Kaminsky, and essays by Jonathan Lethem and Geoffrey O’Brien.

There are no new supplements on hand, but Criterion’s beautiful assemblage of all things Killers-related remains a vital packaging of several flawed, intense, historically notable noirs.