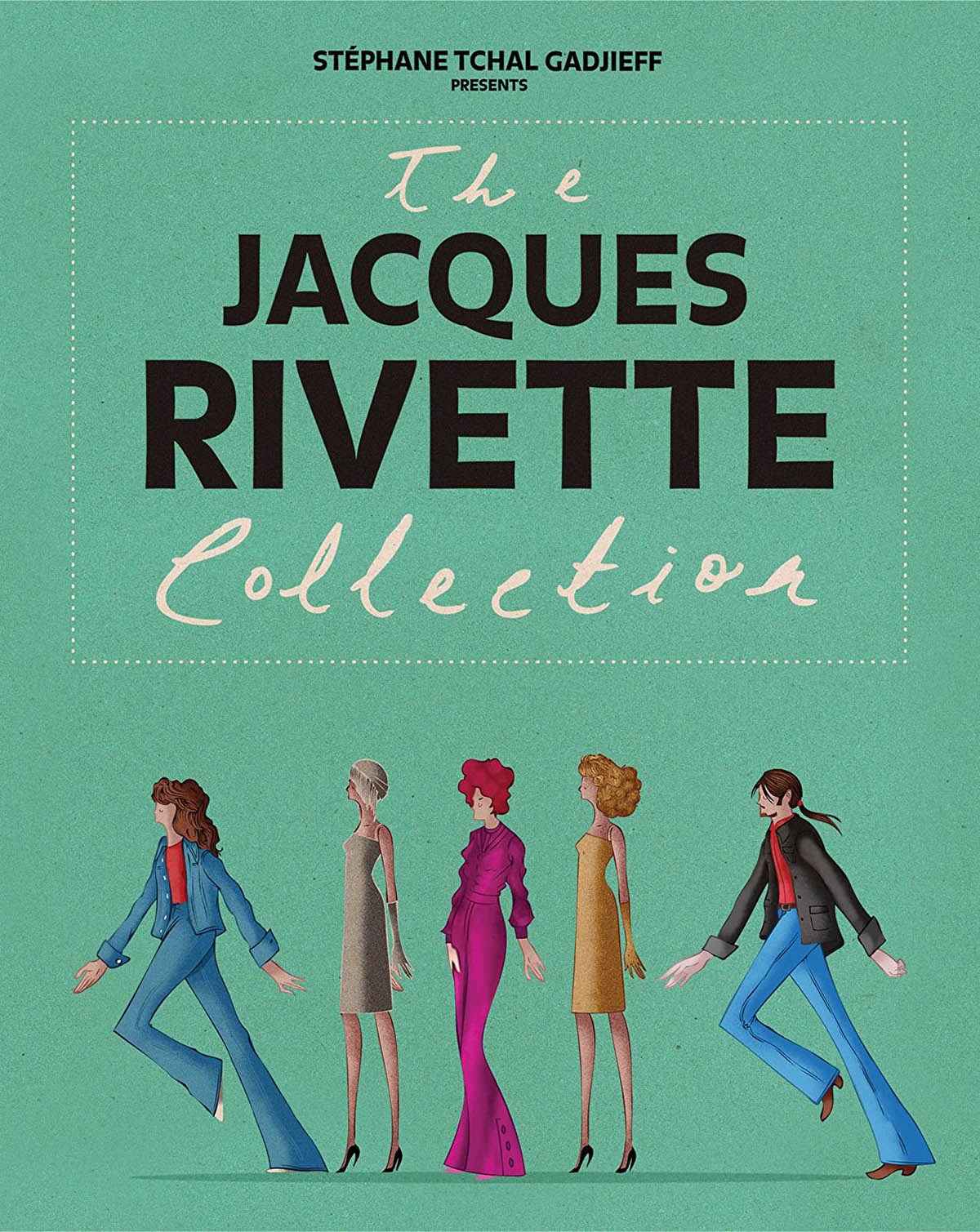 In the wake of Celine and Julie Go Boating’s critical success, Jacques Rivette undertook an ambitious new project: an interconnected series of four films with the collective title Scenes from a Parallel Life. These films would have expounded, through a heterogeneous blend of genres, an idiosyncratic mythology about two goddesses—one solar, one lunar—whose sphere of influence over humanity extends only through the 40 days of Lent. Each film was also meant to incorporate incrementally more music (performed live on set) and dance routines, culminating in a full-fledged musical for the fourth film. But Rivette only made it through the back-to-back shooting of Duelle (Une Quarantaine) and Noroît (Une Vengeance) before collapsing from exhaustion days into the production of the third film.

Duelle hews closest to the stated intentions of the series. Leni (Juliet Berto), the dark-haired Daughter of the Moon, faces off against Viva (Bulle Ogier), blond-tressed Daughter of the Sun, for control over an enchanted diamond that will permit its owner to hold sway on Earth indefinitely. Rivette counter-intuitively couches this florid fairy-tale material in a hard-bitten film-noir framework, going so far as to toss in explicit visual references to The Lady from Shanghai and The Big Sleep. There’s even a callback to Celine and Julie when trenchcoat-clad taxi dancer Elsa (Nicole Garcia) inexpertly trails Viva through the streets. Duelle achieves its most surreal and poetic effects through the cognitive dissonance of this sort of generic juxtaposition.

DP William Lubtchansky’s cinematography is impressively fluid and intricate. The camera seems to be constantly on the prowl around the film’s disparate locations, which run the gamut from elegant salon to the seedy nightclub where Jean Wiener plays piano, tracking the goddesses and their recently recruited acolytes, siblings Pierrot and Lucie (Jean Babilée and Hermine Karagheuz), through the shadowy Parisian demimonde. In stark contrast to the film’s often-stagey interiors, the finale takes place in the open air of the Parc Montsouris, once Lucie discovers a way to defeat the divine adversaries. Ultimately, Duelle proves to be a sort of delightful bagatelle: intoxicating in its surface textures, intriguing in its moments of offhand surrealism, yet lacking the psychological depth-charge that turns even the most bowdlerized fairytales into perennial objects of fascination.

Noroît lashes together the blood-spattered Jacobean drama The Revenger’s Tragedy and a swashbuckling tale of lady pirates, with Fritz Lang’s Moonfleet providing the operative visual reference. For the most part, the series’s overarching mythological concerns remain embedded in the background. There’s only the vaguest sense, until the film approaches its surreal finale, that the requisite pair of mortal enemies, Morag (Geraldine Chaplin) and Giulia (Bernadette Lafont), possess anything more than human abilities. Even then, their final confrontation comes across more like a modern dance recital than a magical melee, which Rivette renders even more bizarre by alternating between monochrome film stock and harsh red filters.

The filmmakers make the most of their location: a 12th-century castle perched atop the rocky, tide-tossed Brittany coast that had previously been used in The Vikings. Blue skies and fields of vibrant flowers imbue the film with much-needed color. The costumes and furnishings are an intentionally anachronistic union of past and present, and the live musical accompaniment comes courtesy of a trio who improvise on a wide range of medieval instruments. More than in Duelle, the interplay between actor and musician is paramount here, swapping rhythm and syncopation like a jazz ensemble.

In the film’s most intricately choreographed scene, Morag and Erika (Kika Markham) entertain the band of brigands by enacting onstage (and in English) a histrionic murder plot lifted more or less directly from The Revenger’s Tragedy that deliberately echoes their recent poisoning of Regina (Babette Lamy). Over the course of their performance, the camera executes several 360-degree pans that register the bandits’ reactions slowly turning from amusement to alarm, until a brawl breaks out between rival factions within the pirate camp. The scene is an exquisite fusion of formal sophistication and Rivette’s ongoing preoccupation with theatrical preparation and performance.

More than the other titles in this collection, Merry-Go-Round’s production history seems to bear directly on the slapdash quality of the finished film, wherein even the obligatory on-screen musical accompaniment feels merely tacked on. In an attempt to recoup some of the losses producer Stephane Tchalgadjieff suffered from the proposed series’s collapse, Rivette went into production without much of a script, so that Merry-Go-Round seems in some superficial ways closer to Rivette’s earlier improvisatory films like Out 1. Bearing in mind the fact that Merry-Go-Round was hampered by financial limitations, not to mention the constant friction between costars Maria Schneider and Joe Dallesandro, it’s hardly surprising that the film’s paper-thin narrative winds up endlessly chasing its own tail.

Yet there’s something intriguing and oddly endearing about the film’s willful collocation of signifiers: games of chance recur throughout; doubles and imposters are abundant; and a nursery rhyme-like incantation, “Cadet Rouselle,” yields significant clues to the whereabouts of a hidden treasure. A parallel narrative has Dallesandro running through the woods, pursued by a knight in armor, or else fleeing another woman (Hermine Karagheuz) dressed exactly like Schneider’s character, referred to cryptically as “The Other” in the credits. Whatever connection there may be between the two storylines remains deliberately opaque, though it does provide this hectic and often harried film a wonderfully still final shot: Karagheuz and Dallesandro sit cross-legged atop opposing sand dunes, regarding each other in tranquility, accompanied only by the rhythmic slap of the sea upon the shore.

Arrow’s 2K restorations look clean and vibrant overall. Duelle has the most issues, with some persistent fluctuations in color density and skin tones in an already muted color scheme, and occasional compromise to image sharpness and clarity due to dense grain during lower-light scenes. The color palette in Noroît is frequently vivid, and the fine details of costume and décor stand out clearly most of the time, with only a few nighttime scenes marred by thick clouds of grain. Merry-Go-Round fares the best, with a clean, clear image, strong color and skin tone delineation, and well-resolved grain structure. The PCM mono tracks for Duelle and Noroît betray some tintinnabulation in the upper registers, but at least the direct-recorded scores play quite nicely in tandem with the dialogue. Merry-Go-Round sounds fuller and stronger on the whole, but sometimes the interpolated score and other ambient sound effects overwhelm the English-language portions of the dialogue, rendering it completely unintelligible.

In “Remembering Duelle,” Hermine Karagheuz discusses the novelty of working from a script after participating in Jacques Rivette’s Out 1, and Bulle Ogier talks about how the filmmaker psychologically manipulated the relationship between Juilet Berto and herself to more closely reflect the enmity between their characters. Jonathan Rosenbaum shares some recollections from visiting the sets of Duelle and Noroît, and cogently delves into the films’ technical and thematic elements. Two interviews with Rivette done for German TV in 1990 and 2004 explore the impetus behind the films, their invented mythology and other connective tissue, and Rivette’s working relationships with cast and crew. Rivette also speaks candidly about the collapse of the project. The perfect-bound book includes an overview of Rivette’s career from Mary Wiles, a quartet of on-set reports from the autumn 1975 issue of Sight & Sound, and an appreciation of Merry-Go-Round from critic Nick Pinkerton, as well as technical specs on the restorations.

The films in The Jacques Rivette Collection, three fascinating fusions of diverse genres and mythological fantasies, have been given satisfying transfers and some eye-opening supplements.