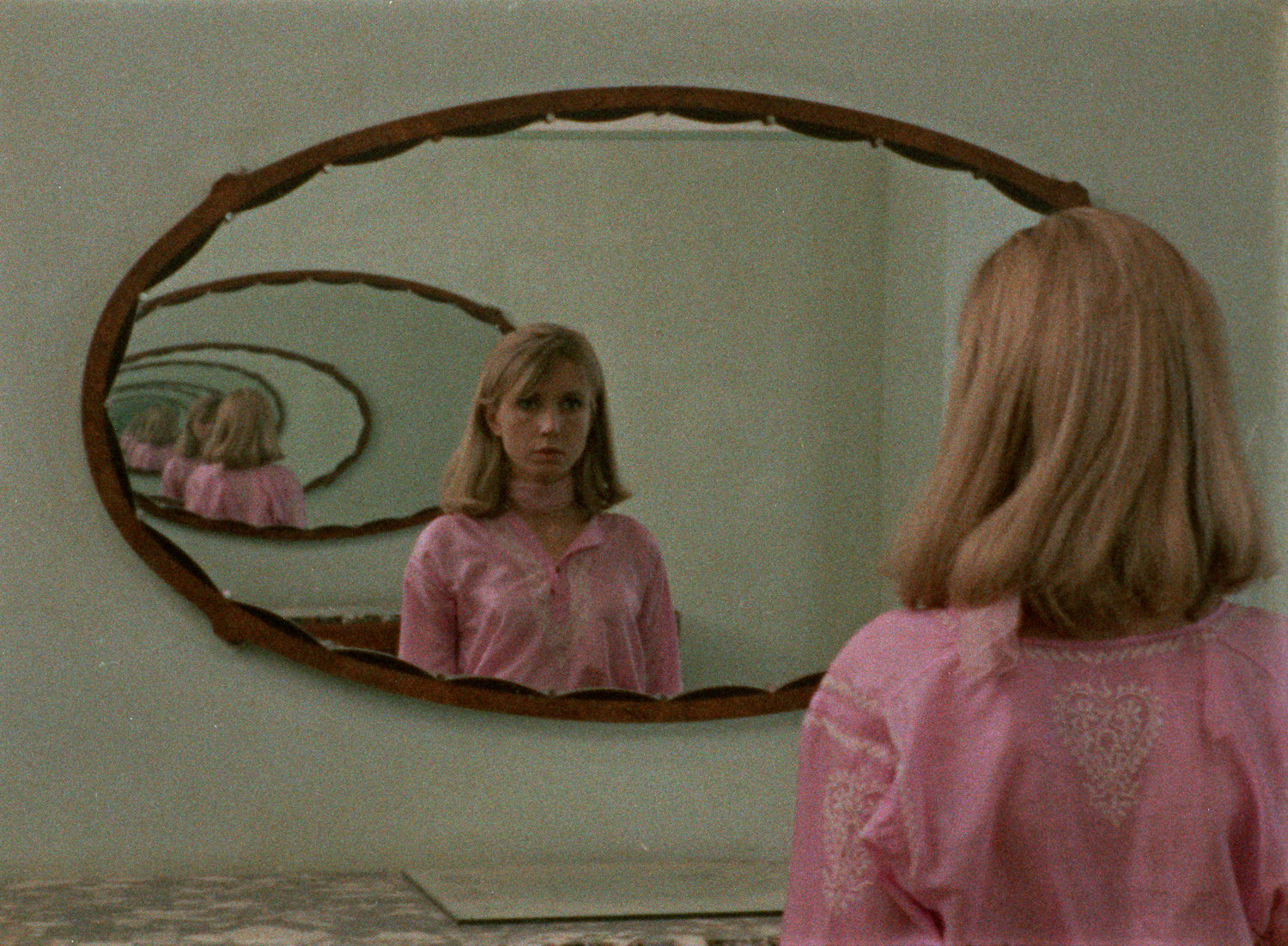 Though Jacques Rivette’s Out 1 is often described as a time capsule, it hardly functions as a medium for concrete historical research. The 1971 film takes place in a major global city (Paris in the late ‘60s) for all of its 13 hours, but it’s notable for how radically disconnected it is from the quotidian texture of metropolitan life—from matters like what any of its characters do to make a living, how they get around, what their typical routine is, what they eat or drink, or what they do in their downtime.

Instead, it carves its own peculiar universe out of a cluster of people existing in marginal relationships to conventional daily reality, orbiting around the living, breathing Paris caught in the backgrounds of Rivette’s camera according to their own eccentric priorities and senses of time. In this way, its emblematic image is one in which Jean-Pierre Léaud—as a shapeshifting loner, Colin, who’s by turns a panhandler, a journalist, a hopeless romantic, and an amateur sleuth investigating a nebulous conspiracy—paces through the streets and loudly delivers poetic oratories to no one in particular, all while confused civilians attempt to go about their business around him.

As the architect behind the organization of this peripheral world, Rivette promptly goes about establishing a cinematic time-flow that reflects that of his characters. In the first installment of this eight-part, freely improvised epic, we’re introduced to the two experimental theater troupes that form the film’s primary ensemble, both of which are workshopping texts by the Greek playwright Aeschylus, in a pair of marathon sequences. The first documents a collective led by the spunky and outspoken Lili (Michèle Moretti) in the midst of acrobatic rehearsals for the frontlines tragedy Seven Against Thebes, and the second finds impassioned ringleader Thomas (Michael Lonsdale) guiding his colleagues through a more outré take on the canonical Prometheus.

Neither performance articulates a particularly discernible narrative, nor do they look especially show-ready. Rather, process is key for these actors, and Rivette’s long, observational takes savor their spontaneous energy. The latter scene, in particular, offers one of the more arresting displays of movement and form in the entire film, a protracted record of writhing, moaning bodies intermingling with furious intensity that recalls the kinetic quasi-dance filmmaking of Carolee Schneemann or Amy Greenfield.

Despite these early bursts of dynamism, however, Out 1 is largely a film of conversation, as its prolonged rehearsal vignettes regularly give way to even lengthier scenes of verbal self-analysis. Thomas’s group of players, especially, has a penchant for dwelling in great detail on the beat-to-beat impulses behind their improvisations, discussions that muddy the distinctions between performance and authentic involvement. It gradually becomes evident that the collectives are more interested in working through psychological bewilderments for their own sake than they are in carrying their work into the public sphere, though their reasons for craving this outlet become part of the mystery around which Out 1 dances.

After hours of seemingly arbitrary intercutting between these theater activities and more mundane business in the streets, a chain of enigmas starts to usher the film toward something resembling a plot. After spending the first few episodes as a harmonica-tooting mute annoying café patrons until they slip him money, Colin stumbles upon, then obsesses over, a series of cryptic letters during one of his afternoon wanderings. Meanwhile, Frédérique (Juliet Berto), who busies herself with her own form of vagabond mooching (feigning interest in men before robbing them), ends up on an analogous mission after interacting with an ostensibly benign fellow (Jacques Doniol-Valcroze) who’s the current holder of similar letters.

Much of Out 1’s midsection, therefore, consists of Léaud and Berto reclusively practicing oddball investigative tactics: counting exercises, dress-up acts, and zombified brainstorms that find them, for instance, crossing busy intersections like they’re peaceful poppy fields. Against all odds, these methods lead them to “The Thirteen,” a curious secret society—or is it?—that seems to be on the tip of everyone’s tongue yet whose exact nature is never disclosed. More recognizable New Wavers—Bulle Ogier, Barbet Schroeder, and Françoise Fabian, among others—enter the mix as characters who may or may not have connections to this network of possible significance, though none are easy to get a handle on, as their personas often shift from wide-eyed obliviousness to devious hints of large-scale criminality.

Even the ostensible main characters aren’t to be blindly trusted: Colin arhythmically slithers in and out of frame as if trying out some variation on Inspector Clouseau and only deviates from his default blankness during one memorable laughing fit in a hippy den; Berto’s baby-faced gentleness is complicated by her all-too-casual commitment to underhanded petty offenses, not to mention an animalistic tussle with a guy on a sidewalk; and Thomas, whom Lonsdale plays as part political extremist, part randy philanderer, and part tender patriarch, is the slipperiest of all.

Even less graspable, though, is the vague conspiracy that binds them all. In a hushed sequence in the penultimate installment where one character begins to explain the “dangerous things” Colin has gotten himself into, Rivette discreetly reverses the dialogue track when it seems crucial revelations are on the horizon. The result is an unintelligible, uncanny garble (one imagines David Lynch had this effect on his mind when he conceived of the Red Room dialect in Twin Peaks) that singlehandedly puts to rest any and all expectations that this mounting mystery will be “solved.”

In doing so, Out 1 subtly pivots into a more reflective mode for its final hours, one that officially dissolves the concrete details into ciphers and red herrings and redirects attention to the sources of the anxieties driving them. It’s here that the film most deeply fascinates, where it digs into the hitherto unclear connections between its various wandering souls and insinuates the faiths and fears that either brought them together or drove them apart.

Unfortunately, this progression does little to shed new light on the preceding hours, which remain roundabout distractions from the core collective psychology that eventually surfaces. It doesn’t help that Rivette’s mise-en-scène is often crushingly one-note: A typical setup consists of a frontal, nonchalantly framed master shot that places anywhere from two characters to an entire cluster of folks against sparse backgrounds, many of which play little to no role in the drama playing out in front of them.

In addition to praising Rivette’s improvisatory emphasis on actor agency, Adrian Martin’s recent book, Mise en Scène and Film Style: From Classical Hollywood to New Media Art, is instructive in this regard. Martin discusses the director as someone who’s sensitive to the many atmospheric variables and contingencies in a given scene, and who ideally finds ways to encourage those elements to interact with and inform the dramatic artifice. Rivette’s images, meanwhile, feel segregated from one another (the blips and bumps of the direct sound recording go a long way to augmenting this impression) and hermetically sealed off from the world beyond the production space. Indeed, there’s even a moment when the unseen end of a phone line is represented by the cues of an actor just off screen.

Combined with Rivette’s utter, radical disregard for narrative compression (sometimes hours pass before a thread started in one scene gets continued), this aesthetic distance often makes the film itself feel as provisional as the Aeschylus adaptations Out 1 depicts. And when characters are more or less talking in what amounts to a highly coded language about things that may or may not even exist, alienation can be a natural response.

It’s with some consolation to the frustrated viewer, then, that Out 1 features a cameo from Eric Rohmer (whose current standing as a more controlled and rational-minded director than Rivette would probably have come to neither man’s surprise or shame) in which he eloquently and comprehensively chides Colin’s “poor grasp of reality.” Thankfully, Out 1 is good for an occasional chuckle, and this little nugget provides droll evidence that Rivette intends the film more as an experiential exploration than a statement in stone.